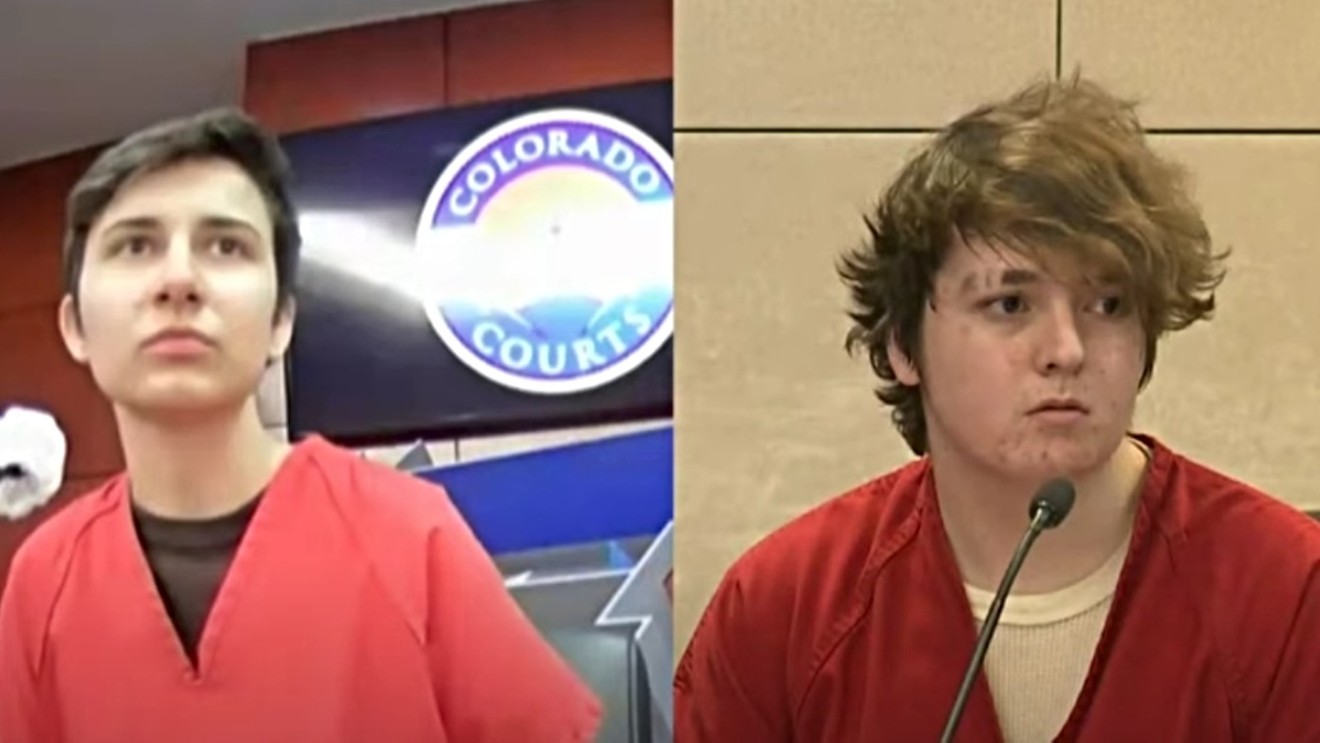 Alec McKinney, right, testified that both he and Devon Erickson were responsible for the 2019 attack at the STEM School. CBS4 via YouTube
The jury in the trial of Devon Erickson for the 2019 attack on STEM School Highlands Ranch had to grapple with one major question: Should he be let off the hook for killing student Kendrick Castillo, among other crimes, because he was allegedly bullied into participating by co-conspirator Alec McKinney?

The answer was a resounding "No." After only a few hours of deliberation, jurors found Erickson guilty of all 46 charges against him, including first-degree murder.

Attempts at blame-shifting started early, as was made clear by the release of Erickson's arrest affidavit two weeks after violence broke out in the halls of the school, located at 8757 Ridgeline Boulevard in Highlands Ranch, on June 7, 2019.

The document's timeline begins at 1:53 p.m. that day, when authorities in Douglas County were notified of an assault on the school. The call came from a teacher who said shots had been fired and were continuing to sound. Later reports identified the perpetrators as then-eighteen-year-old Erickson, who was described as a white male with pink hair and a checkered shirt, and Alec McKinney, a transgender sixteen-year-old who wore a Nirvana hoodie and boasted purple and black hair.

Shortly thereafter, authorities detained McKinney, who was armed with a handgun, in a hallway. Meanwhile, Erickson was in classroom 107. He was being held down by students, including one who'd been shot in the leg (Joshua Jones) and another who'd suffered a gunshot wound to his torso and was unconscious: Castillo, who subsequently passed away. Although Erickson wasn't armed at the time, two handguns and a rifle were found in the classroom.

Erickson was subsequently interviewed by two sheriff's office detectives at the Highlands Ranch substation. McKinney had said he was "super suicidal" and "wanted to get revenge on a lot of people," Erickson told them.  Among those potentially marked for murder were McKinney's mother and siblings, but Erickson said he'd talked McKinney out of taking their lives. He also contended that McKinney had threatened to kill him, too, if he blew the whistle. Instead, he went along...and carnage followed.

McKinney pleaded guilty to adult charges of first-degree murder and more in February 2020, and was subsequently sentenced to life with the possibility of parole after forty years. At the trial, which began in late May, he was among those who testified against Erickson. "I believe we share equal responsibility for everything that happened," he said. "No one tried to stop anyone. No one tried to force anyone into this. We were both mutually agreeing."

The jurors concurred — but in a statement about their decision, Governor Jared Polis chose to focus not on the killer, but on Castillo and his parents. "Just over two years ago, we lost a real Colorado hero who died trying to protect others," Polis noted. "Kendrick Castillo’s bravery will never be forgotten. While we cannot bring Kendrick back, we can find solace in the fact that the people responsible for this tragic and unthinkable event will be held accountable. My heart is with John and Maria at this moment, and all of the lives Kendrick touched."

Sentencing for Erickson has been set for September 17. Click to read the Devon Erickson arrest affidavit.
KEEP WESTWORD FREE... Since we started Westword, it has been defined as the free, independent voice of Denver, and we'd like to keep it that way. With local media under siege, it's more important than ever for us to rally support behind funding our local journalism. You can help by participating in our "I Support" program, allowing us to keep offering readers access to our incisive coverage of local news, food and culture with no paywalls.
Make a one-time donation today for as little as $1.