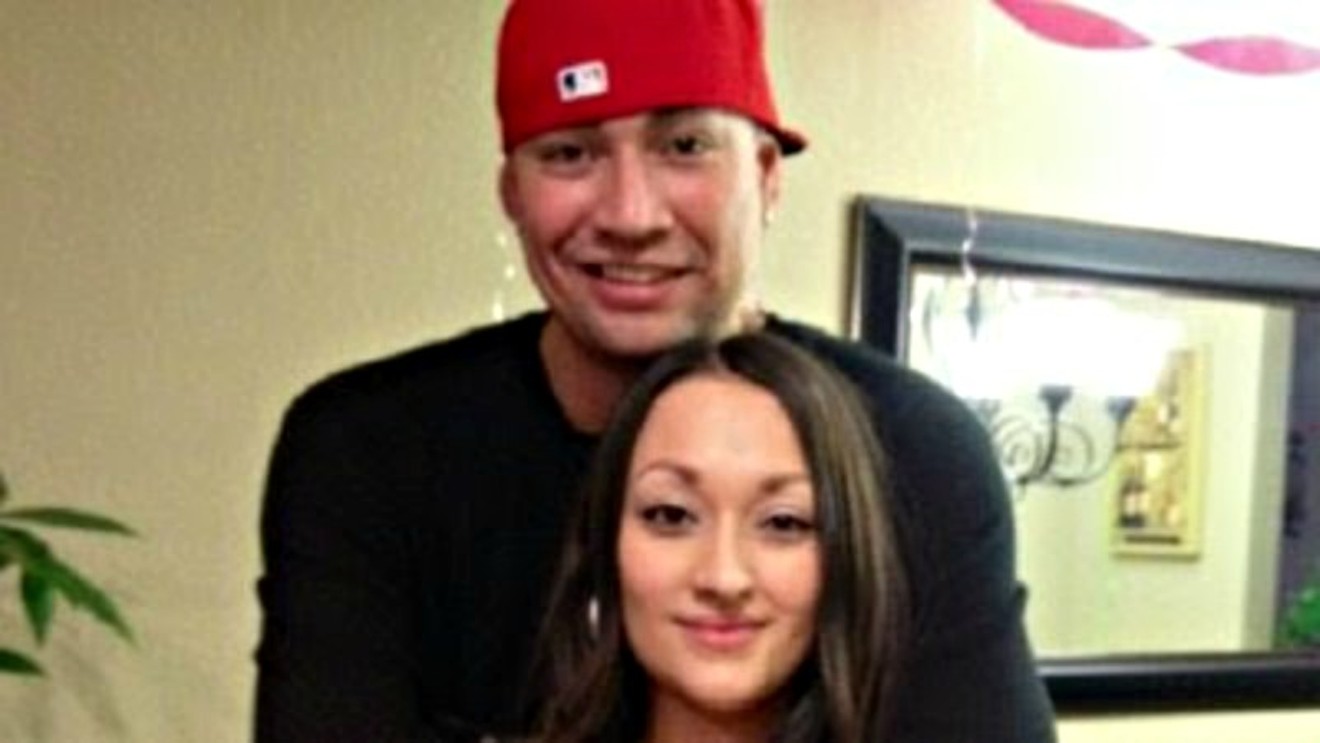 The late Jaime Ceballos with his wife, Quianna Ceballos. Family photo via Holland, Holland Edwards & Grossman, P.C.
The City of Thornton has agreed to pay $1.25 million to settle a wrongful-death lawsuit filed on behalf of Jaime Ceballos, who was in the midst of a mental health crisis when a police officer shot and killed him only about a minute after arriving on the scene. Ceballos was holding a baseball bat at the time of the 2013 incident, which took place in the driveway of his home, but he was too far from law enforcers or other witnesses to be an actual threat to anyone.

Attorney Anna Holland Edwards of Denver's Holland, Holland Edwards & Grossman, P.C. represented Ceballos's estate on behalf of his wife, Quianna, and two young children, Jayden and Naveyah, over four long years of litigation. She calls the agreement "a major victory for the mentally ill," as well as a message to police departments everywhere that they need to implement de-escalation techniques when dealing with individuals struggling with the sort of issues that affected Ceballos. "One of our points," Holland Edwards notes, "is that there's no one to call if someone's erratic, suicidal, on drugs — because you're worried the police will shoot them."

Thornton's reaction to the settlement is a statement from Police Chief Randy Nelson, one of the defendants in the case, along with Officer William Husk, who fired the fatal shots; Commander Dante Carbone, another responding cop; and the city as a whole. "The death of Jaime Ceballos was tragic, and the Thornton Police Department is committed to ongoing self-evaluation and its continued focus on crisis intervention training for its police force to keep members of the community and its officers safe," Nelson writes.

This sympathetic tone stands in stark contrast to actions the TPD took in the immediate aftermath of Ceballos's death. A  2017 ruling by the late Judge Richard Matsch in U.S. District Court for the District of Colorado documents that Husk and Eric Ward, another officer on hand when Ceballos died, were awarded "medals of valor" for how they dealt with the matter. Likewise, Matsch pointed out, Nelson testified that "he would have the officers handle the situation the same way if faced with it again."

Rather than accept Matsch's decision, which found in favor of Ceballos's family, Thornton took the case to the Tenth Circuit Court of Appeals. Earlier this year, the Tenth Circuit concurred with Matsch in an opinion accessible below, along with the original complaint, filed in 2015. According to Holland Edwards, Thornton considered appealing to the U.S. Supreme Court before reversing course and choosing to settle instead.

Holland Edwards's account portrays Ceballos's death as the inevitable consequence of the shoot-first-and-ask-questions-later philosophy. "Jaime Ceballos is a man who was employed [he worked in security and loss prevention], he was married, he had two small children and he was involved in taking care of them. But that evening [just after 7:30 p.m. on August 30, 2013], he was in the middle of a crisis. He was on drugs and he was having trouble with mental-illness concerns. So his wife called the police."

The lawsuit confirms that Quianna Ceballos told the 911 operator that her husband had a knife, and a kitchen blade was indeed found on his body after the shooting. However, he never pulled it out or brandished it in the presence of police. 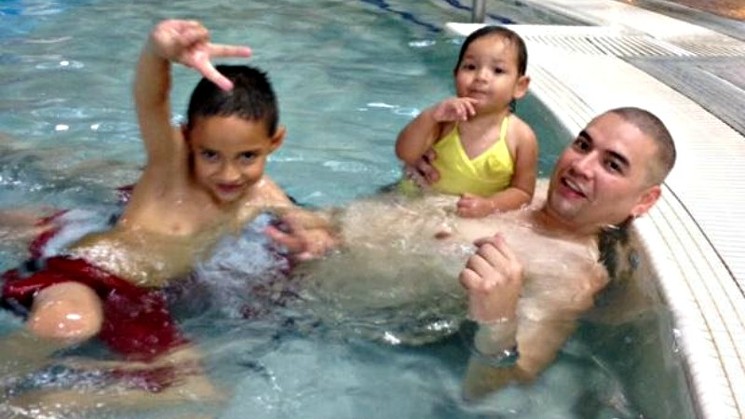 Jaime Ceballos with his kids, Jayden and Naveyah.
Family photo via Holland, Holland Edwards & Grossman, P.C.
"He was in his own driveway, talking to himself, and his wife and his friends were trying to help him," Holland Edwards continues. "He had a baseball bat in his hand, but that was all. But when the police got there, they refused to take any information from his friends or engage in any de-escalation. They marched down the street, one holding a taser, the other one holding a gun."

In all, four cops answered Quianna's call: Husk, Ward, Carbone and Officer Michael Snook. At the time of the shooting, the Thornton Police Department was administering crisis-intervention instruction, and Snook was among about half the force that had completed the course. Holland Edwards sees it as telling that he informed dispatch he was going to get a less-than-lethal tool to gain control of Ceballos — a beanbag shotgun. But before he could do so, Husk assumed the leading role.

"This police officer, we believe, not only engaged in excessive force, but he was also part of this Robocop militarized mentality," Holland Edward maintains. "It was an old-school turf thing: This was his turf, and even though he wasn't crisis-trained, he took charge. And a lot of that old-school, militarized-police, entrenched wrong thinking about how to handle people in crisis came to bear in this case."

Specifically, the complaint states, Husk and the other officers advanced on Ceballos with weapons on display, repeatedly yelling, "Drop the bat or we'll shoot."

To that, Ceballos said, "Fuck you, shoot me then!" — and Husk did, squeezing off six rounds in rapid succession. The autopsy report revealed that Ceballos died from two bullets in the chest that perforated his lungs and vertebrae.

By Holland Edwards's estimate, the elapsed time between the cops' arrival and the shooting was "less than a minute."

Ceballos was around twenty feet from the officers when he spoke his last words — too great a distance to strike them with the bat unless he threw it, which he didn't try to do. Instead, he made what Holland Edwards describes as "a gesture" that was interpreted as movement toward them. A taser was also deployed, and the police argued in court that it had been fired first and had no effect, necessitating Husk's actions. But witnesses felt the taser was deployed either simultaneously with the first gunshot or shortly thereafter.

To Holland Edwards, this debate is academic, since the scenario should never have been allowed to reach that point. "They got the medal for standing their ground, which is amazing to me, because they should have backed up. They shouldn't have been yelling at someone not in his right mind. No one was in danger, and there was no reason not to take some time, learn about what was going on, talk to him. There was no reason to charge down the street in less than a minute."

Many principles of de-escalation "aren't that complicated," she emphasizes. "Time is on your side. Use distance. If no one is in danger, take the time to learn about what's going on. We were told again and again the only thing Jaime could have done differently was to drop the bat, and that until he was willing to do it, they weren't going to de-escalate. But that's the opposite way of how de-escalation is supposed to work."

Multiple judges agreed, and as a result, Thornton taxpayers must pony up the aforementioned seven-figure sum — and that doesn't count legal fees accrued over a four-year period that likely bring the total outlay close to $2 million. But even though "Thornton has taken responsibility monetarily," Holland Edwards says, "they needed these courts to tell them they were wrong."

She adds: "The family of Jaime Ceballos brought this case because they want change in this country in terms of how police see the rights of everyone, including the mentally ill. At the time he died, it was the law that he had the right to have police disengage and de-escalate. But police continue to act like they can do anything they want. So the family hopes that the police will stop recklessly creating these moments and give people in crisis someone to call when they need help."

By the way, Officer Husk remains a member of the Thornton Police Department. Click to read Estate of Jaime Ceballos v. City of Thornton, et al. and the 10th Circuit Court of Appeals ruling.
KEEP WESTWORD FREE... Since we started Westword, it has been defined as the free, independent voice of Denver, and we'd like to keep it that way. With local media under siege, it's more important than ever for us to rally support behind funding our local journalism. You can help by participating in our "I Support" program, allowing us to keep offering readers access to our incisive coverage of local news, food and culture with no paywalls.
Make a one-time donation today for as little as $1.