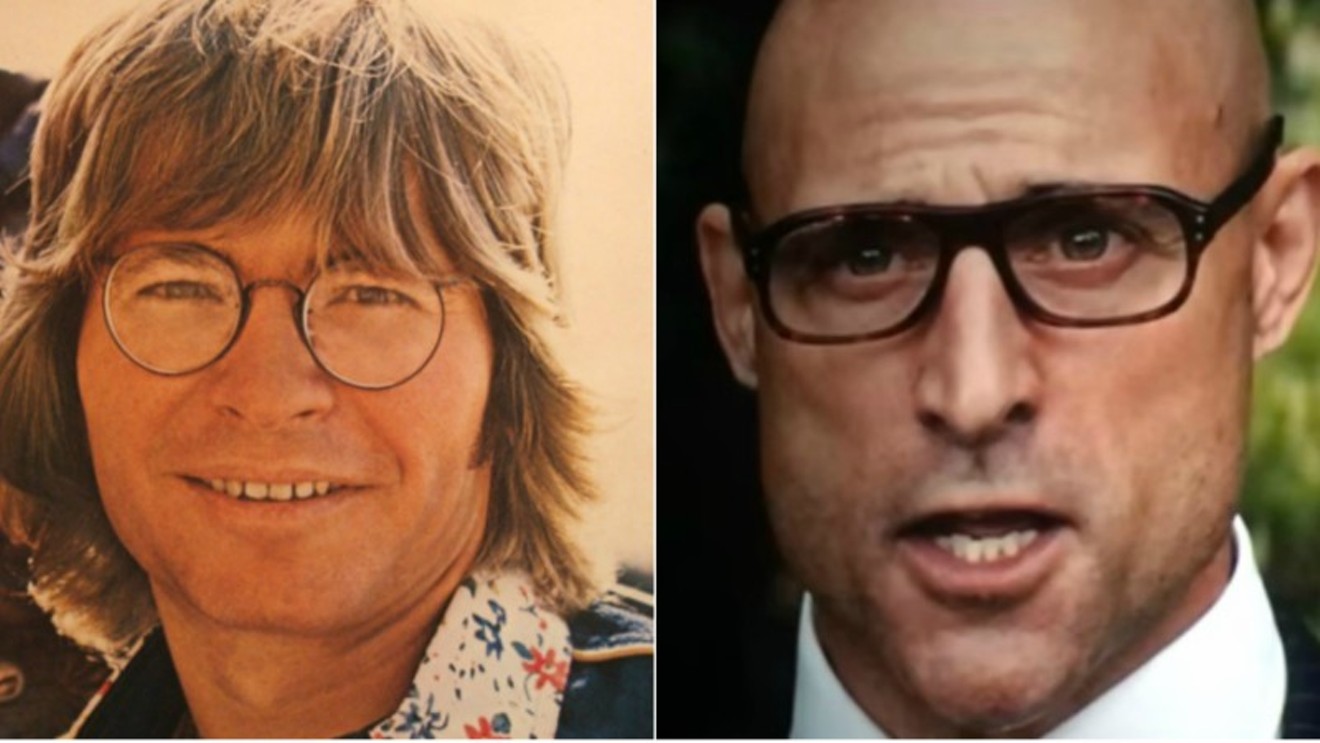 John Denver circa the 1970s and Mark Strong belting out "Country Roads" in a scene from Kingsman: The Golden Circle. File photo/YouTube
Twenty years ago today, on October 12, 1997, John Denver died when an experimental aircraft he was flying crashed into Monterey Bay off the coast of California. But even before this benchmark anniversary, the makings of a full-scale JD revival was under way, as exemplified by the prominent role his song "Take Me Home, Country Roads" plays in two major films currently unspooling at a multiplex near you. And speaking as a longtime resident of the city for which the man born Henry John Deutschendorf Jr. renamed himself, I find that irritating as fuck.

To explain: I grew up in Grand Junction, a town that loved-loved-loved John Denver. In fact, his music was so omnipresent during my youth and adolescence that it seemed as if it was constantly running on a tape loop broadcast by speakers secretly planted on every street corner in town.

Grand Junctionites who came of age under these circumstances tended to either adore or abhor tunes such as "Sunshine on My Shoulders" and, of course," "Rocky Mountain High." The woman who became my wife chose the former response, which makes sense given her fondness for other drecky AM Gold of the era, including the Carpenters, Bread and Bobby Sherman, while I chose the latter course.

You might say we have a mixed marriage. But we're also living proof that love can overcome seemingly insurmountable obstacles — so long as she sings along to "Annie's Song" when I'm not around.

As the years wear on, our dislike of certain music can be softened by nostalgia, but that hasn't been my experience when it comes to John Denver. All these decades later, the sound of his whiny, mewling ballads or cheesy "Thank God I'm a Country Boy" exuberance still give me gooseflesh. So imagine my horror as I watched Logan Lucky, the new movie by director Steven Soderbergh. The flick is about smarter-than-they-look hayseeds who mastermind a racetrack heist, and the protagonist, played by Channing Tatum, has a thing for "Country Roads." Indeed, the emotional conclusion of the tale finds young Farrah Mackenzie, who portrays the Tatum character's daughter, crooning the ditty at a talent show while her daddy and the rest of the audience melt into a figurative mound of goo. Here's what it sounds like:

How I managed to survive that and still mostly like the movie, which I did, I'll never know.

Cut to the following weekend, when my beloved and I headed to the theater again, this time to see Kingsman: The Golden Circle, the sequel to the saucy 2014 action hit Kingsman: The Secret Service. I was looking forward to a couple hours' worth of pure escapism — but then, during the opening minutes, I heard "Country Roads" again.

True, it was a vocal-free orchestral version this time. However, I feared that its up-front placement was a harbinger for more John Denver to come. And unfortunately, I was right.

This time around, Merlin (Mark Strong), the semi-father figure of main man Eggsy (Taron Egerton), was revealed to worship John Denver's oeuvre — and he demonstrated his dedication with his last breath.

Spoiler alert: In the following scene, Merlin delays gunmen who are zeroing in on Eggsy and main mentor Harry Hart (Colin Firth) by belting out an a cappella rendition of "Country Roads" — and if you're like me, you'll be ready to pull the trigger, too, by the time he finishes. Witness the results below.


In both of these cases, the characters' affection for John Denver comes across as ironic and comic — sort of like when Deadpool waxes poetic about Wham's "Careless Whisper." But that's how revivals start. One minute, the kids from Glee are belting out a crappy Journey track, and the next thing you know, you can't walk into a department store without being assaulted by "Don't Stop Believin'."

Granted, plenty of people in Denver, and Colorado as a whole, will be stoked if today's anniversary results in John Denver's warbling becoming ubiquitous again. As for me, I'm just hoping that the next time I go to the movies, no one will sing "Country Roads."