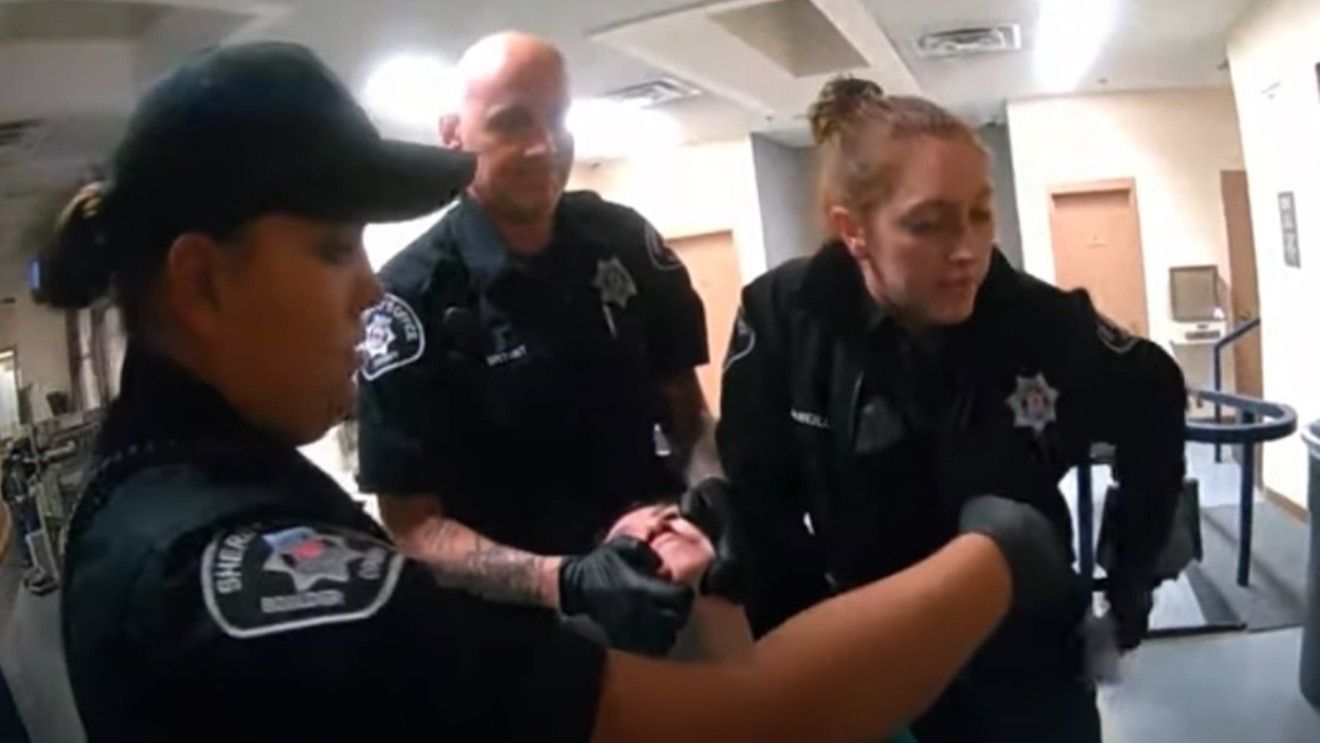 Lauren Gotthelf grimacing while under restraint in Boulder County jail, as seen in a video on view below. Boulder County Sheriff's Office via YouTube
On November 25, 2017, Lauren Gotthelf was smoking a cigarette and walking on Boulder's Pearl Street Mall with her dog, Sage, who had just posed for a photo with a costumed Santa Claus, when she was stopped by Boulder Police officers. Before long, she'd been arrested, taken to jail, ordered to disrobe, strapped to a restraint chair and subjected to multiple pain compliance techniques, including a taser blast to the leg — all because of a supposedly suicidal remark she denied making.

The Boulder County Sheriff's Office, which staffs the jail, initially denied any improper actions. But that changed yesterday, September 24, when the BCSO announced a $400,000 settlement with Gotthelf that includes several procedural changes, including a prohibition against tasing anyone in a restraint chair and greater involvement of mental health professionals.

"Lauren's number-one priority in bringing this case was to make sure that no other person suffered the same indignity that she had," says attorney Mari Newman of Denver's Killmer, Lane & Newman, LLP, who represents Gotthelf. "She was very committed to ensuring that significant policy changes were a key part of resolving the case."

According to Newman, "Lauren was arrested on the Pearl Street Mall for allegedly smoking a cigarette and walking her dog without a leash." Sage, Gotthelf's service dog, "was ripped away from her, and while Lauren was in a holding cell, Boulder jail personnel claimed she made a suicidal statement. But instead of treating her with any sort of compassion or humanity, they demanded that she strip naked — and when she balked at that, they went into her cell, forcibly extracted her and shoved her into a restraint chair."

Once Gotthelf had been strapped down, Newman continues, "they inflicted multiple types of force on her, including a hypoglossal hold around her throat and jaw and multiple different kinds of pain compliance techniques. Even while she was restrained, they tased her in the upper thigh. It was absolutely inhumane, as well as unconstitutional. They then left her sitting in a cell strapped in the restraint chair with a spit hood over her head for hours."

And the action was captured on video:

Newman filed a lawsuit on Gotthelf's behalf in November 2019, naming the City of Boulder, Sheriff Joe Pelle and eight jail employees as defendants. In response, the Boulder County Sheriff's Office released a "Statement Regarding the Use of Force Lawsuit from Lauren Gotthelf."

In the document, the BCSO maintained that "when Ms. Gotthelf arrived at the Boulder County Jail, she was disruptive and was placed in a holding cell. Staff tried to deescalate her behavior, but Ms. Gotthelf was argumentative and unrelenting. She refused to comply with repeated commands from two separate deputies. When deputies attempted to take her arm to escort her to a cell, she sat down and refused to move. When the order was repeated she got up, walked about ten feet from the holding cell and stopped. She planted her feet and braced her legs to prevent movement. She was wearing socks and deputies had to slide her across the linoleum floor into the cell because of her resistance and refusal to move." 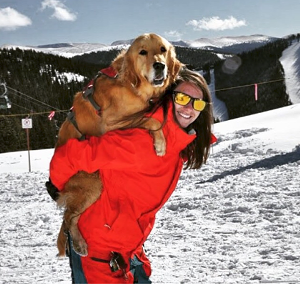 Lauren Gotthelf with her dog, Sage.
Family photo via Killmer, Lane & Newman, LLP
Gotthelf "continually made negative, vulgar, and racist comments to deputies. She continued to yell insults for forty-five minutes. As the video depicts, Ms. Gotthelf continued to be resistant and disruptive, and Jail personnel determined she would be placed in the restraint chair, which was necessary for her safety. Due to her resistive behavior the restraints on the chair could not be secured. She was given several verbal commands to sit in the chair and stop resisting but continued to buck her body and be physically resistant. A sergeant touch tased her once with the 'drive-stun' setting in the left thigh for pain compliance. To secure her head, a deputy applied a hypoglossal hold. Even after these techniques, Ms. Gotthelf continued to be uncooperative, but deputies were finally able to properly apply all of the restraints. Medical staff checked the restraints in accordance with policy.... In short, the deputies did not use excessive force against Ms. Gotthelf."

The BCSO's denials didn't surprise Newman. "From the beginning, the sheriff's office did what sheriff's offices always do: They circled the wagons and declared they hadn't done anything wrong," she says. "So I'm happy that the Boulder sheriff's office has acknowledged that changes needed to be made and then made those changes."

A sheriff's office release reveals that the $400,000 settlement was reached on September 21. "As a result of the lawsuit, Boulder County has re-evaluated its policies," the release notes, explaining that it has altered its protocol as follows:


• Prohibiting the use of a CED [a conductive energy device, also known as a taser] by a deputy while an individual is restrained in a restraint chair;
• Requiring consultation with jail mental health staff before using a restraint chair to restrain a detainee, where possible;
• Requiring the presence of jail medical or mental health staff to evaluate the need for suicide protocols regarding a detainee before implementing suicide protocols, where possible;
• In-person mental health services will be available for detainees at all times (except that during the COVID pandemic, they may be provided through Telehealth means during nighttime hours); and
• Additional mandatory training of deputies on these changes in policy, including de­-escalation and treatment of inmates and detainees with mental health concerns.

In Newman's view, the video shows precisely why these reforms were necessary. If the officers "truly believed Lauren was suffering from a mental health crisis, this was the exact opposite way that a humane and compassionate government would treat a human being."

That Boulder went from declaring its innocence to admitting that it erred in less than a year qualifies as a relatively rapid response, given the slow pace at which the justice system typically operates. The turnaround time could suggest that officials realized the footage of Gotthelf's treatment would prove so shocking to any jury that capitulating was the only option, but Newman isn't so sure.

"Very often, we're forced to litigate egregiously outrageous cases for years and years," she allows. "Who's to say why a defendant ultimately resolves a case? But I'm glad Boulder did the right thing here."

Click to read the amended complaint in the case of Lauren Gotthelf v. Boulder, Colorado, et al.
KEEP WESTWORD FREE... Since we started Westword, it has been defined as the free, independent voice of Denver, and we'd like to keep it that way. With local media under siege, it's more important than ever for us to rally support behind funding our local journalism. You can help by participating in our "I Support" program, allowing us to keep offering readers access to our incisive coverage of local news, food and culture with no paywalls.
Make a one-time donation today for as little as $1.