Lee Keltner on the ground outside Denver Civic Center. Photo by Michael Emery Hecker
Pinkerton is among the most famous security agencies in the world. Founded in 1850, the firm's colorful history includes the reported foiling of an early assassination attempt against Abraham Lincoln and its pursuit of Old West outlaws such as Butch Cassidy, as memorialized on the silver screen.

But the firm won't be able to do business in Denver anytime soon. Pinkerton's license in the Mile High City has been revoked over its failure to properly vet the credentials of Matthew Dolloff, who fatally shot Lee Keltner, 49, during a so-called "Patriot muster" and separate BLM soup drive at Civic Center Park on October 10, 2020, while working as a security guard for 9News.

The station had hired Dolloff as an independent contractor through Pinkerton, only to subsequently learn he wasn't licensed as a security guard in the City of Denver. 9News also maintains that it had no idea Dolloff was armed; his concealed-carry permit was issued through Elbert County, whose sheriff canceled it in the wake of the shooting.

Pinkerton had obtained Dolloff's services through Isborn Security Services, his actual employer. Isborn subsequently surrendered its license to operate in Denver; according to Excise and Licenses spokesperson Eric Escudero, the company must wait at least five years before reapplying for a license. 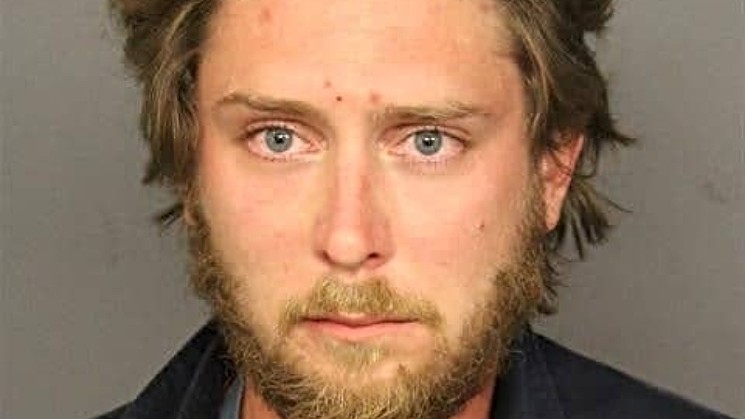 The October 2020 booking photo of Matthew Dolloff.
Denver District Attorney's Office
Earlier this year, a hearing officer had recommended that Pinkerton's license be suspended for six months. But the city determined that wasn't punishment enough. On June 7, Denver Department of Excise and Licenses Executive Director Ashley Kilroy chose instead to revoke "the private security guard employer license held by Pinkerton Consulting and Investigations Inc. in the City and County of Denver," says Escudero. "This final decision rejects the Denver hearing officer’s recommended penalty of a six-month suspension of Pinkerton's private security guard employer license and finds that the mitigating and aggravating factors weigh in favor of revocation of the license. The license revocation is effective thirty days after the date of this order. If the licensee has not continued to provide security services, the effective date of revocation may be the date its previous license was set to expire — October 16, 2020." Like Isborn, Pinkerton must wait at least five years before applying for a license to operate in Denver again.

Denver's licensing of security guards has been overhauled in recent years. "This is the seventh occasion since 2015 that Denver has suspended or revoked a private security guard employer license," Escudero points out. "This final decision resolves all pending administrative cases in Denver related to the October 2020 security guard shooting incident."

Dolloff had none of these licenses in Denver. He pleaded not guilty to a charge of second-degree murder on May 28; he's next due in court for a motions hearing on August 6.

Click to read the Pinkerton license revocation decision.
KEEP WESTWORD FREE... Since we started Westword, it has been defined as the free, independent voice of Denver, and we'd like to keep it that way. With local media under siege, it's more important than ever for us to rally support behind funding our local journalism. You can help by participating in our "I Support" program, allowing us to keep offering readers access to our incisive coverage of local news, food and culture with no paywalls.
Make a one-time donation today for as little as $1.