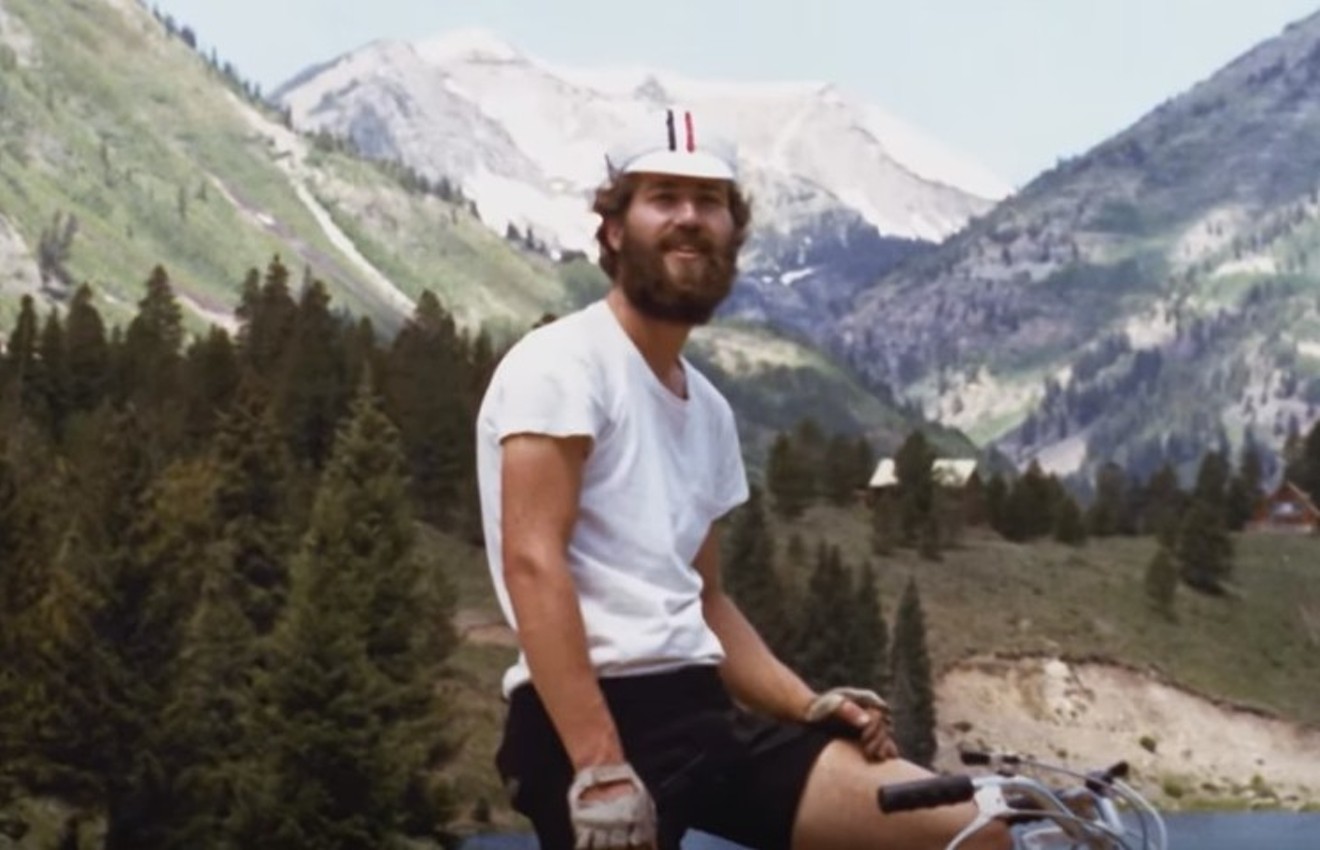 A photo of Mike Rust as seen in an Outside magazine video. YouTube file photo
The mystery behind the death of Colorado mountain-biking pioneer Mike Rust has finally been solved. Yesterday, December 7, a jury in Saguache County found Charles Moises Gonzales guilty of killing Rust, whose remains weren't found until nearly seven years after he vanished in 2009 under mysterious circumstances.

As we've reported, Rust, nicknamed "Mike the Bike," didn't invent mountain biking, but he's credited with helping to popularize the sport both as a competitor and as a behind-the-scenes technician whose innovative spirit is still being felt today.

His accomplishments are outlined on the website for the Marin Museum of Bicycling, the California-based incarnation of the Mountain Bike Hall of Fame, which was formerly based in Colorado. 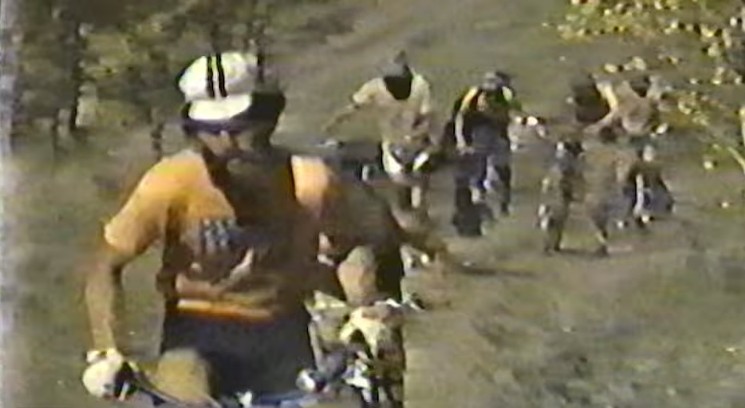 
A native of Colorado Springs, Mike grew up in a large family (5 brothers and 1 sister). He began building bicycles at an early age; his first was when he was in the seventh grade. This bicycle had a cruiser frame, sturmey-archer 3-speed hub, 40 degrees laced to a 36 degree 26 x 1.75 rim, 3-speed stick shifter and a banana seat.

In 1965, Mike built a mountain bike with a stingray frame, 20-inch wheels, knobby tires (front & back), flat handlebars and a leather saddle, which he launched off the front porch. His next bicycle was a used French 8-speed with 2 chainwheels and a 4-cog free wheel to which he added “curldown” dropbars.

After a 5-year romance with his motorcycles, Mike rediscovered bicycles, became a USCF licensed racer and worked in several Colorado Springs bike shops. His first version of a mountain bike brought him to Crested Butte, in 1980. Mike stayed in the Butte for the following two summers (he wasn’t a fan of the cold CB winters) and worked at Bicycles, Etc. for Neil Murdoch. Mike’s cycling experiences were very influential on the early Crested Butte mountain bike scene both in the technical and competitive arenas.

Mike’s first Pearl Pass Tour was in 1980. He carried his own gear to Aspen, sleeping bag and all, and rode back to Crested Butte the following day over East Maroon Pass on his Littlejohn framed bicycle.

Mike then toured Arizona and worked in the Bisbee Bicycles business. After Bisbee he returned to Crested Butte to work on some of his innovations, which included chromo axles and seat posts for modification to mountain bikes.

In 1985, Mike and Don McClung started Colorado Cyclery and built their first elevated chain stay bike, the Shortie. In 1986, Colorado Cyclery moved the business to Salida, Colorado. That year Mike pursued another of his cycling loves and built his first ordinary bicycle. Rust participated in the Ordinary World’s Road Championships Museum & Parade where he rode the ordinary in performances of the play “Spokesong."

In 1989 he place first in Colorado State Games Mountain Bike Races. In 1990, with his five brothers, he rode ordinaries in Dublin, Ireland for their St. Patrick’s Day Parade. Mike and his brothers also rode the Colorado “Ride the Rockies” tour on their high-wheelers.

The Hall of Fame bio concludes, "Currently Mike resides in the sleepy community of Saguache, Colorado" — and that was true up until his 2009 disappearance. 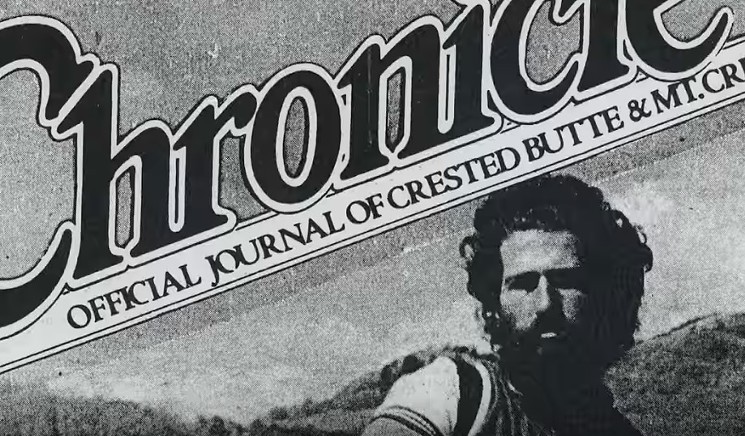 Rust as seen on the cover of a Crested Butte newspaper.
YouTube file photo
Questions related to what happened are outlined at the Charley Project, a website created to garner more attention for missing-persons cases that may have fallen from the public consciousness.

"Rust was last seen in Saguache, Colorado at 7:30 p.m. on March 31, 2009," the account begins. "He was riding a friend's red and white Honda CRF-230 Enduro off-road model motorcycle northbound on a forest service road near his home, which is near mile post 92 on Highway 285. He called a friend on his cellular phone, angry, and said someone had burglarized his residence and he was going to track down the burglar(s), who had left tire tracks in the dirt and snow.

"He has never been heard from again," the narrative continues. "All indications were that Rust didn't intend to be away from home for very long; he left his phone behind and didn't take any of his off-road motorcycle gear. He also left groceries, still in their bags, on the kitchen counter, and some items within the house were out of place. An old .22 caliber revolver was missing from his house. Rust had inherited the gun from his deceased brother and he cherished it."

The Charley Project notes that in May 2009, the motorcycle Rust had been riding "was found at the bottom of a steep, rocky ravine near the Cotton Creek trailhead in the San Isabel National Forest in the Sangre de Cristo mountains, about twenty miles east of Rust's home. His blood was on the seat and the foot clutch. Authorities stated it didn't look like the bike had been in a collision; rather, it appeared as if it had been pulled or thrown 65 feet down into the ravine. No indication of Rust or his body could be found in the area.

Mike Rust circa 2008.
charleyproject.org
"Investigators believe Rust was beaten and kicked to death after he confronted two men who had burglarized his home," the site maintains.

Cut to January 2016, when human remains were found near the intersection of highways 17 and 285 in Saguache County — and in April, they were positively identified as Rust.

The following June, the Colorado Bureau of Investigation announced that an arrest warrant had been issued in the case for Gonzales — and serving it was undoubtedly easy, since he was in jail in Cañon City at the time.

More specifics emerged over the weeks and months that followed. In the fall of 2015, reported the Salida-based newspaper The Mountain Mail, Michael Gonzales, the then-twenty-year-old son of Charles, reached out to a Saguache County Sheriff's Office deputy to say his father had been involved in the Rust matter. Based on this tip, authorities obtained a warrant to search Charles's property early the following year.

The remains that were unearthed during this process included what The Mountain Mail described as "a unique belt buckle of the type worn by Rust, in the shape of a bicycle gear." 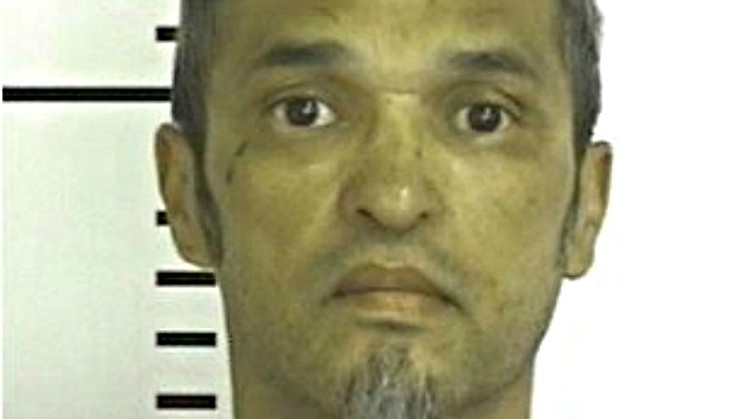 The booking photo of Charles Moises Gonzales.
Colorado Bureau of Investigation
In an interview cited in his arrest affidavit, Gonzales said he'd been cutting wood behind Rust's home — and as he was taking his leave, Rust began chasing after him on his motorcycle and accusing him of breaking into his place. During the scuffle that resulted, Gonzales said his .22 caliber revolver accidentally fired, killing Rust.

The Saguache County jury didn't buy this explanation, finding Gonzales guilty of all the counts pressed against him, including first-degree murder, first-degree burglary, tampering with physical evidence, theft and abuse of a corpse. He was immediately ordered to spend the rest of his life in prison without the possibility of parole.

At the sentencing hearing, The Mountain Mail points out, Gonzales apologized to Rust's family but insisted, "God knows I didn’t mean to hurt him."

As for Rust's sister Annie Crandall, she was gratified by the sentence, but the grief she feels over what happened lives on. In her words, "My parents both died not knowing what happened to their son."