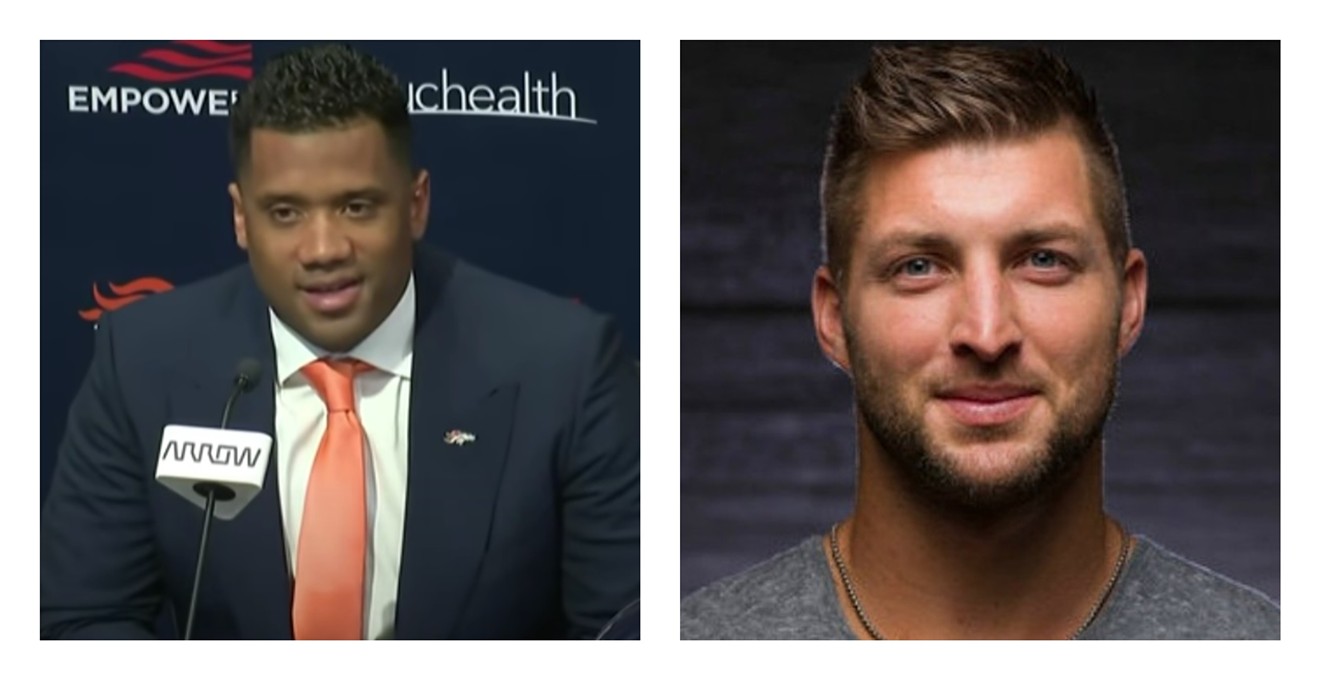 Russell Wilson at his introductory Denver Broncos press conference on March 16 and a portrait of Tim Tebow. Denver Broncos via YouTube/WaterBrookMultnomah.com
Since news broke on March 8 that the Denver Broncos had traded for Super Bowl-winning quarterback Russell Wilson, win-starved residents of Broncos Country have gloried in the excitement of his acquisition and taken pleasure in the pain suffered by boosters of the Seattle Seahawks, his former squad, and other teams in desperate need of an elite signal-caller.

But while scads of articles have celebrated Wilson's on-the-field skills and devotion to community — epitomized by a well-publicized visit to Children's Hospital in the company of his celebrity wife, entertainer Ciara — there's been relatively little comment about something he has in common with one of the most beloved Broncos from the past.

To wit: Wilson is the most Jesus-y Bronco since Tim Tebow.

As discussed in "Tim Tebow Timeline: The History of the Chosen One in Denver," the Florida Gators legend spent fewer than two years in the Mile High City; he was drafted in April 2010 and traded to the New York Jets in March 2012, the same month Denver acquired the services of one Peyton Manning. But the shadow he cast while Tebowing in assorted NFL end zones lingered for far longer. (For proof, check out this 2018 post filled with tweets from true Tebow believers praying for his return.)

Of course, Christianity was a big part of Tebow's brand long before he came to Denver. At Florida, he had a fondness for writing "John 3:16" on his eye black, and he and his mom co-starred in a Super Bowl ad on behalf of Colorado Springs' Focus on the Family shortly before he first suited up in blue and orange. Once in Denver, Tebow tweeted enough religious text to fill one of Westword's most viewed posts of all time, the December 2011 offering "Tim Tebow's 10 Most Motivational Bible Verse Recommendations & When to Use Them."

Wilson can relate. During his introductory Broncos press conference on March 16, he repeatedly offered praise to his Heavenly Father and revealed that his mother sends him scriptural passages every day. He tweets plenty of them, along with Christian affirmations that are frequently enhanced by capital letters and exclamation points.

Wilson and Tebow have abstinence in common, too. Tebow famously claims to have preserved his virginity until he married former Miss Universe Demi-Leigh Nel-Peters in January 2020. Likewise, Ciara told E! News that she and Wilson remained celibate throughout a dating process that lasted more than a year, choosing to wait "until the deal [was] sealed" before finally consummating their love.

Here are eighteen Wilson tweets about his faith from 2022, listed in reverse chronological order. When you're done reading, you may be convinced that Wilson is the Broncos' next Chosen One — if you weren't certain already.

“Trust in the Lord with all your heart and lean not on your own understanding; in all your ways submit to him, and he will make your paths straight.”
Proverbs 3:5-6 NIV

Jesus YOU are Worthy!

Jesus cares about you!

NO MATTER WHAT I WILL PRAISE YOU JESUS! YOU ARE WORTHY!

“Rejoice in the Lord always. I will say it again: Rejoice!”
Philippians 4:4

Another opportunity to Glorify YOU!!!#ProBowl

My Joy is found in the King of Kings! Jesus is the way!

Spirit of God! More of His Presence!

“Be kind and compassionate to one another, forgiving each other, just as in Christ God forgave you.”
Ephesians 4:32 NIV

New Year! Grateful I get to do life with you @Ciara & our 3 babies! I can’t wait for what God has in store for this year for our family! Life is a gift! Every moment is Heaven sent with our family! 2021…… 2022 Let’s Go! pic.twitter.com/ZNbsnaoFHn