Inside Dandy Dan's, on whose property the killing of Junior Izaguirre Gamez took place. Facebook
A year ago this month, a homicide outside Players Club in Adams County anchored a roundup of eight slayings or attacks at Colorado strip joints. And the violence connected to such venues didn't end there. In recent months, there have been two more incidents at metro-area strip clubs, with the latest, at Dandy Dan's on South Federal Boulevard, resulting in a first-degree-murder charge against Jared Chavez.

Continue for coverage from eight previous Westword posts, plus details of the two latest crimes.

As you'll see, the first of the incidents below also took place at Dandy Dan's, and the 2015 #SelfieSaturday killing at PT's II All Nude was among the reasons cited when the City of Denver purchased the club last year as part of an effort to spur an economic revival in the area.

At about 11:45 p.m on February 8 at Dandy Dan's, a South Federal strip club, a pair of men got into an altercation in the parking lot — and only one of them left alive.

The victim has been identified by the Denver coroner's office as George Valenzuela-Lopez, 34.

"The cause of death is complications of multiple gunshot wounds," the medical examiner release states. "The manner of death is homicide."

The Denver Police Department has identified a suspect in the shootout as Benjamin Lucero, 22.

Two people were injured, with one possibly in critical condition, at Platinum 84, a Federal Heights strip club, toward the end of an evening touted on the venue's Facebook page with the promise that the action would be "smoking hot."

By 1:45 a.m., according to 7News, only about ten customers remained at the club.

And that's when all hell broke loose.

Law enforcers from several agencies, including the Thornton and Westminster police departments, responded to the scene.

Investigators believe a number of customers (they weren't employees) got into an altercation that erupted into gunfire.

Two men were hit by flying lead — one in the hip, the other in the chest. The former is expected to survive, and it's hoped that the latter will as well, although he was possibly in critical condition at last word. 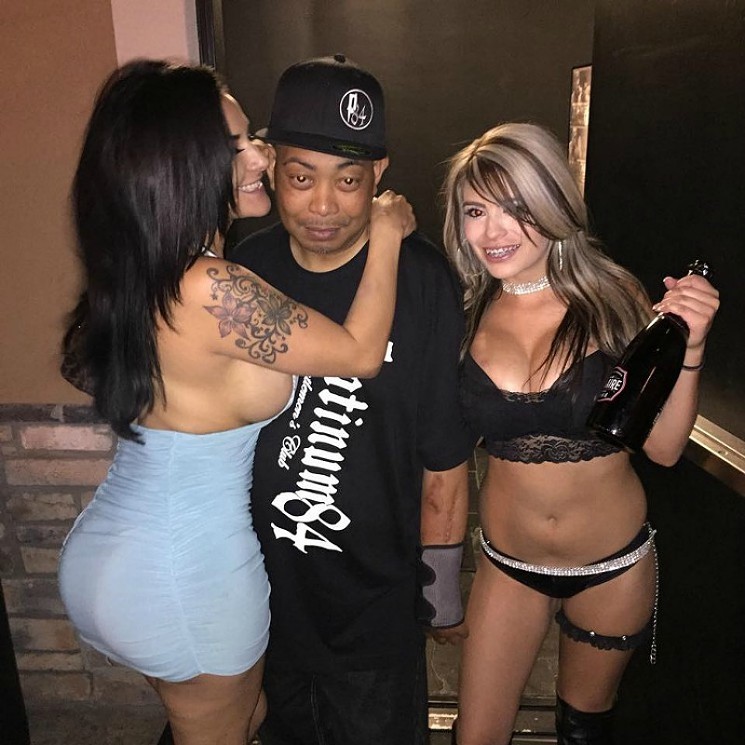 A Facebook photo of 2 Live Crew's Christopher Wong Won, clad in Platinum 84 gear. He performed at the club prior to an altercation that injured a police officer.
Facebook
Platinum 84 Strip Club Back in Spotlight: Cop Hurt After Attack on Night of 2 Live Crew Show
TUESDAY, SEPTEMBER 30, 2014, AT 5:53 A.M.

Just last month, Platinum 84, a Federal Heights strip club, made headlines due to a high-profile shooting that injured two people. Now, the venue's back in the news for another crime: an attack that caused a police officer to be hospitalized.

A Platinum 84 post on Saturday noted that the final show was almost sold out — but Lieutenant Gary Toldness, spokesman for the Federal Heights Police Department, says the matter that led to the officer's injury doesn't appear to have been related to the performance. Instead, the problems centered around what he refers to as a "bachelor party bus.

"There was some kind of incident inside the bar," Toldness continues. "Maybe someone touched a dancer and was asked to leave — but he wouldn't leave. So the cops were called."

Upon officers' arrival, the alleged troublemakers "weren't really fighting. They were just being obnoxious," Toldness allows. "But as the officers were trying to investigate the incident, directing people to stay and not to go, the guy involved in the incident got on the bus — and when they tried to get him off the bus, that's when the incident happened."

Specifically, a man struck a police officer in the face, injuring him severely enough that he had to be hospitalized.

We've all done it — gone up to a vehicle in a parking lot that looked like ours only to discover it was actually someone else's.

In general, though, we don't get stabbed for making this mistake.

That's apparently what happened to a customer of a strip club in Grand Junction — an incident that led to the arrest of Parker resident Clinton Clarke.

The location of the incident was Fantasy Gentlemen's Club, which we wrote about in August 2013 owing to a lawsuit filed by exotic dancers at the venue. Among other things, the complaint cited an alleged payment structure that included exorbitant fines for a whole range of actions — such as ponying up $50 plus increased stage fees if a customer touched a dancer's vagina.

At about 1:40 a.m., according to the Grand Junction Police Department, a club employee called 911 after a man came into the venue with what were described as stab wounds to his stomach and chest.

The working theory early on: The man had been in the club, went outside, got stabbed and returned.

During the investigation that followed, investigators stopped a pickup truck that matched the description of one seen leaving the parking lot around the time of the stabbing. The pair of occupants included Clarke, but both were subsequently released.

The officer who'd quizzed Clarke and his compatriot subsequently eyeballed surveillance video showing that their truck had indeed been the one that had split from the club around the time of the stabbing, the GJPD maintains.

Shortly thereafter, the truck was located again as Clarke and his pal were walking away from it. Clarke then told the officer that he had a knife under his jacket, and the cops say it was smeared with residue "consistent with blood."

As for what happened, investigators believe the victim mistakenly got into the backseat of Clarke's truck and was there when the men emerged from the club.

A witness told police he saw Clarke holding a knife — and the victim was holding his stomach when he got out of the truck.

For his part, Clarke "told officers he did find the victim sitting in the backseat of the truck but denied stabbing him," the GJPD allows. 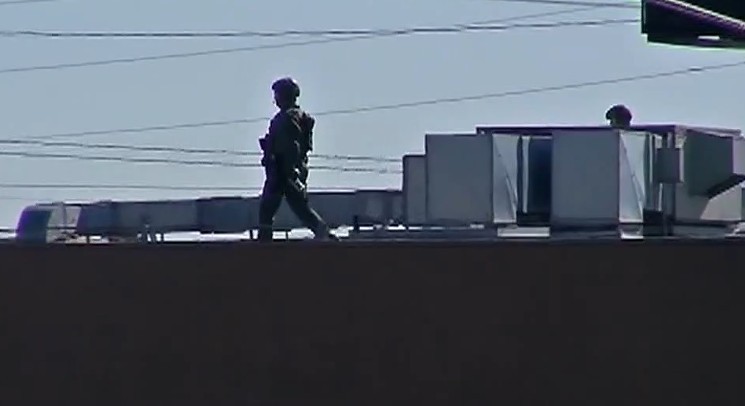 Update: The barricade situation at PT's Showclub, at 1601 West Evans Avenue, is over, and it's ended in strange fashion.

As we previously reported, armed suspects broke into the establishment at around 6:15 a.m., when the only folks inside were members of the cleaning crew, all of whom escaped unharmed.

Afterward, police, including SWAT units, arrived in force, blocking off the street and surrounding the club.

Then, around 9:30 a.m., they entered the premises. It was deserted, suggesting that the men had managed to escape some time earlier.