Call to Arms Brewing Co. on Tennyson is a perfect place to start a beer crawl. Danielle Lirette
Welcome to beer crawl season. As summer moves into fall, the perfect weather emerges for weekend beer crawls. When linking breweries throughout the day, it's important to have good food nearby, a short distance between stops and at least four solid breweries to choose from.

Here are the five best beer crawls in Colorado, with our top choice listed last: 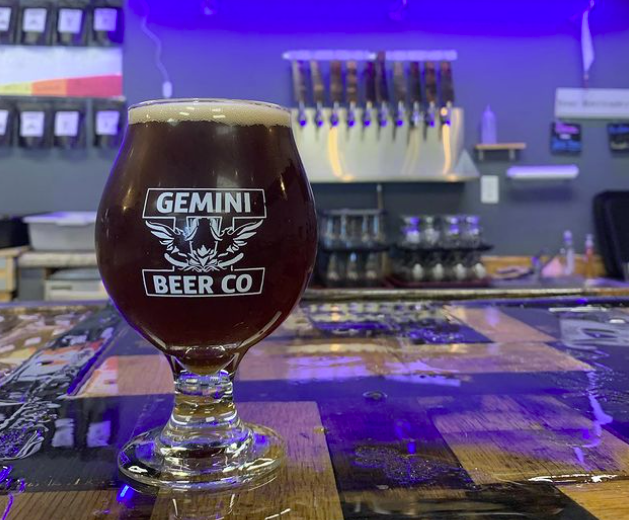 Gemini Brewing/Instagram
Downtown Grand Junction
GJ used to be a desert for breweries, with only longtime stalwarts Rockslide Brewery and Kannah Creek Brewing residing within the city. That has changed in recent years, however, as a host of new breweries moved into town, along with an expansion by Kannah Creek and a wonderful new beer bar, Handlebar Tap House.

For an easily walkable tour, focus on the core of downtown Grand Junction. Start at Foam & Folly, at 330 South 2nd Street, and sample some sessionable beers like the Pale Red, a cross between pale and amber ales. Next, head a couple blocks over to Ramblebine Brewing, at 457 Colorado Avenue, where you can go light with the Living Easy Living Free Kolsch, or malty with God Hammer red ale. The best option, however, might be to explore the handful of excellent IPAs on draft, ranging from juicy hazy IPAs to West Coast IPAs.

By the third stop, food is in order, and the classic Rockslide Brewery & Restaurant, at 401 Main Street, is just a stone's throw away. Rockslide has been serving food and making beer for over 25 years, and you'll find a food menu that rivals some of the better brewery restaurants along with an array of clean, drinkable beers. For your final stop, Gemini Beer Co. is just four blocks away, at 640 White Avenue. Go big for your last beers, with 2016 World Beer Cup silver medalist Sanctuary Golden Strong. Perfectly paired: TRVE Brewing is the Denver home of Music City Hot Chicken.
Kevin Kirshner
Broadway
On Broadway in Denver, where north meets south, exists a small but strong bastion of breweries. Beginning with a lager (any lager, they're all good) at Novel Strand Brewing, located at 305 West First Avenue, is sure to start the tour off right. Four blocks away is TRVE Brewing, the infamous heavy metal brewery at 227 Broadway.Here you'll find everything from pilsners to mixed-culture beers to IPAs. If you're hungry, Fort Collins-based Music City Hot Chicken opened an outpost in the brewery last year. The third stop on this tour is 320 Broadway, where you'll find Baere Brewing. Baere has been making excellent beer for eight years, including its Baere-liner Weisse, a traditional low-alcohol German sour beer, with optional housemade syrups. Your last stop is Banded Oak Brewing, at 470 Broadway, a brewery with a barrel focus and the perfect place to finish this crawl. 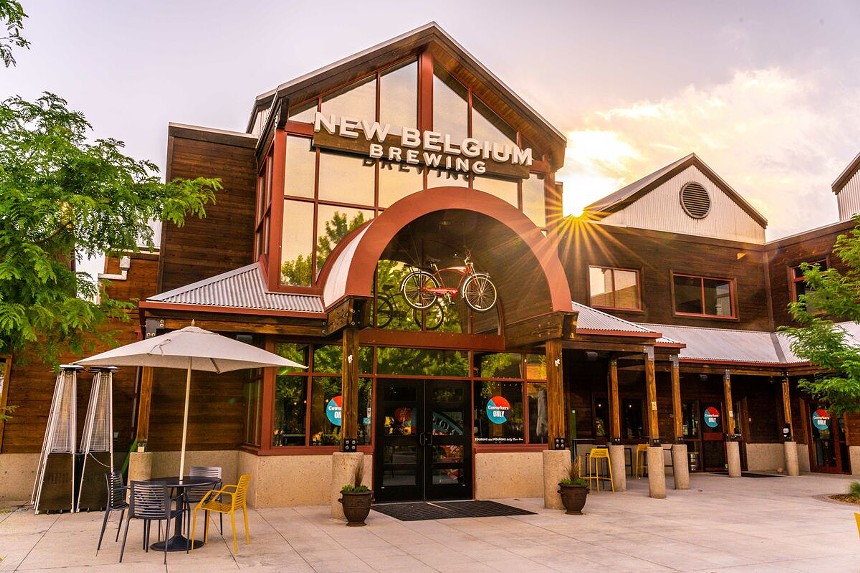 New Belgium Brewing
Fort Collins
Your Fort Collins trek begins with a Colorado classic: New Belgium Brewing at 500 Linden Street, where you'll find some taproom-only beers from the OG. If you have time, take a tour; it's one of the best in the state, and it recently came back after a pandemic hiatus. From there, pop on over to newly opened Hello Brew Co. at 405 Linden Street and have yourself a lager off the side-pull faucet. From there, it's about a half-mile trek to reach another Colorado mainstay, Odell Brewing Company. Located at 800 East Lincoln Avenue, the expansive facility is just a few blocks from where it all began 33 years ago. While there are many excellent beers to choose from, Lagerado, a recent wide release, is a balanced, easy-drinking lager with experimental hops.

The next visit on the tour is only a few doors down, at 1020 East Lincoln Avenue, where Sweetwater Brewing took over the former Red Truck facility in 2021. IPAs are the name of the game at this 420-centric brewery, a theme that carries over to the kitchen, with offerings like Half Baked Poutine, Pretzel Nugz and Dank Chicken Fingers to chow down on. For the final stop, you won't have to go far: Snowbank Brewing is right next door, at 225 North Lemay Avenue. It has a wide range of beers for you to finish up with, from regular brews to small batches and limited releases.

Ratio Beerworks
RiNo Arts District
RiNo is home to one of the highest concentrations of breweries in the state — and the area has a very strong case for being the best beer crawl, too, though one destination barely beat it out. Here, you can't go wrong by starting off at Bierstadt Lagerhaus (2875 Blake Street) for a pull of world-class lager beer. "Helles is the biergarten beer," says Bierstadt co-owner and brewer Bill Eye. "It's the beer you drink when you're going to be drinking beer all day. In a crawl that will include nearly every beer style under the sun, it might be best to start off with a style that can be drunk all day."

From there, Our Mutual Friend Brewing is only a few blocks away, at 2810 Larimer Street. OMF has an eclectic lineup of tasty beers, from funky saisons to hoppy IPAs, to choose from. After that stop, move a block up Larimer to Ratio Beerworks. From King of Carrot Flowers, a carrot elderflower saison, to an array of clean, crisp lagers, to malt-forward ales, you're sure to find something delicious on tap. Around the corner at 3001 Walnut Street is Epic Brewing Company. The Utah transplant has been a mainstay in RiNo since 2013, and is probably best known for its Baptist stout series.

At this point, four breweries in, you'll have to start making some tough decisions. You could head a few blocks up the road to River North Brewery, at 3400 Blake Street, and consider Black Shirt Brewing, at 3719 Walnut Street, too. You could also opt to stick closer to the first four breweries and visit Odell's Five Points Brewhouse location at 2945 Larimer Street, as well as 14er Brewing & Beer Garden, located at 3120 Blake Street.

The Grateful Gnome is part brewery, part sandwich shop.
Molly Martin
Tennyson Street/Berkeley
With a handful of excellent breweries located on a seven-block section of a single street, not to mention a top beer bar and plenty of great food options, Tennyson Street is arguably the best beer crawl in the state.

Starting off on the north side of the tour is Call to Arms Brewing, at 4526 Tennyson Street. "Tours range from people in their twenties on roller skates to the older crowd just working their way down the [street]," says CTA taproom manager and events coordinator Shea Wasson. "We usually suggest starting with some of our core beers if they're trying to get a taste of what we do, but I also love throwing in our specialty releases, since that is what we're known for," she adds.

A few blocks south, at 4369 Stuart Street, is the Grateful Gnome Sandwich Shoppe & Brewery, whose 2017 opening was delayed into 2018 because of a construction accident from one of the never-ending condo builds transforming the neighborhood. The Gnome — one of our picks for our list of the ten best sandwich shops in Denver for its lengthy New York/New Jersey-style lineup — offers an English-style-focused beer menu.

In the alley behind the Gnome is one of Denver's more unique breweries: Berkeley Alley Beer Company. Found in the alley at 4342 Tennyson, Berkeley Alley has changed hands a few times over the years, but the original 7.7 percent ABV French Saison remains a house favorite, next to some of the more modern beers on the menu. After visiting Berkeley Alley, head a block south to The Empourium Brewing. Found at 4385 West 42nd Avenue, it has a sleek, hip interior, with over a dozen draft beers on at any given time. If you need a food break, the three-in-one Denver Biscuit Company/Atomic Cowboy/Fat Sully's is across the street, and top beer bar Hops & Pie is on the way to your final destination: FlyteCo Brewing. At FlyteCo's 4499 West 38th Avenue location, the theme is aviation, and you can choose from about twenty beers to build your own "flyte." There's also a bagel and sandwich shop on the premises, if you're still standing.
KEEP WESTWORD FREE... Since we started Westword, it has been defined as the free, independent voice of Denver, and we'd like to keep it that way. With local media under siege, it's more important than ever for us to rally support behind funding our local journalism. You can help by participating in our "I Support" program, allowing us to keep offering readers access to our incisive coverage of local news, food and culture with no paywalls.
Make a one-time donation today for as little as $1.