The Ten Best Wings in Denver While King of Wings remains closed temporarily, eat your way through these options. Linnea Covington
While chicken can be boring, there are always chicken wings. As the part of the bird with the highest ratio of skin to meat, these little bites are jam-packed with flavor. Some people are team flats, while others are all about the drums, but no matter which part of the wing you prefer, the appeal of these snackable beauties is undeniable.

In America, crispy fried wings have long been a staple of Southern cooking, while Buffalo, New York, birthed the idea of tossing them in a spicy, buttery, vinegary sauce. Now wings come in a seemingly endless array of flavors and styles, from dry rubs to fruit-spiked sauces to smoked versions that you can find at many of our picks for the city's best barbecue joints. The current craze for Korean fried chicken has brought a wave of soy sauce- and gochujang-based takes, and at Vietnamese restaurants, wings get a complex boost from fish sauce.

While searching for the best wings in the area, we tasted our way through a fresh batch of contenders, with a few ground rules. Sadly, one of the city's top American-style wing destinations is currently out of commission: Wheat Ridge's King of Wings ruled our 2021 wing list, but a kitchen fire shut it down last December, and it has yet to reopen. While that spot is on hold, we focused on brick-and-mortars, skipping national or international chains and only considering bone-in wings (because boneless wings are not technically wings at all).

Here are our picks for the ten best wings in the Denver metro area, listed in alphabetical order:
click to enlarge 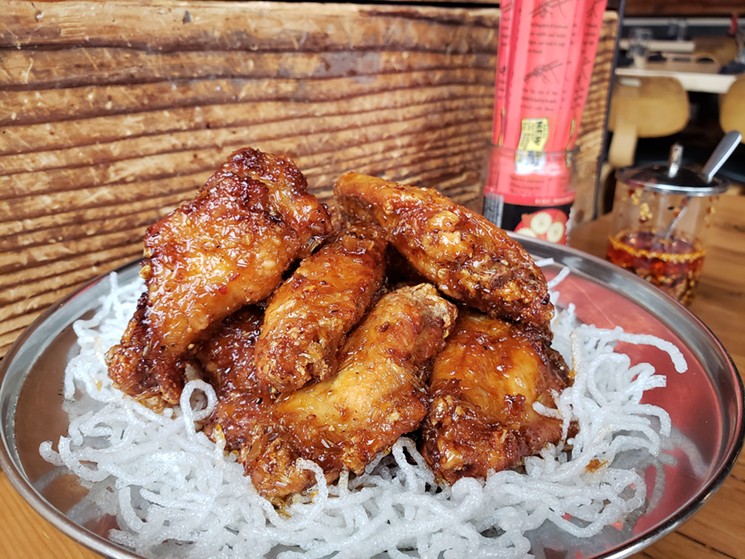 
501 East 17th Avenue
303-800-7705
aceeatserve.com
There are four types of wings on the regular menu at Ace Eat Serve, Uptown's lively spot for Asian cuisine paired with ping-pong. The standout: Tiger Wings, which have been a sticky, sweet and salty staple for years. But Ace chef Thach Tran stepped up the wing game even more with the launch of Wing Alley, a takeout- and delivery-only concept that's open 11:30 a.m. to 10 p.m. Wednesday through Sunday. It offers cauliflower "wings" as well as several dry-rub options in addition to the saucy selections from the Ace menu. Fire on the Mountain has a rotating sauce of the month.
Molly Martin

Fire on the Mountain

3801 West 32nd Avenue
300 South Logan Street
303-480-9464
fotmdenver.com
This wing joint with a jam-band soul opened in West Highland in 2012 and added a Wash Park outpost in 2019. Yes, the wings are on the small side; that's because FOTM uses only cage-free, antibiotic-free chicken, along with making other environmentally conscious moves like composting all of its food scraps and recycling its cooking oil. But size doesn't really matter when the wings are cooked perfectly and tossed in a stellar selection of sauces, including a rotating sauce of the month. The killer beer list is a major bonus, as are the ever-changing specials, just in case you're in the mood to skip wings once in a while. 1819 East 28th Avenue
720-287-3523
gennaraeswings.com
This takeout-only storefront in Whittier was opened by Genn Dickerson in 2016. Originally from the Virgin Islands, Dickerson serves food with a Caribbean edge, including large wings that come in flavors like mango habanero, jerk sauce and Island Zing. More sweet and tangy than spicy, they pack a lot of flavor and a supremely crunchy bite. The "& More" ups the temptation factor at Genna Rae's, since you can pair your wings with a giant $12 burger, soul food dinners like catfish and hot links, and such sides as Southern greens, plantains and mac and cheese. Various locations
gfhwings.com
Golden Flame got its start in Aurora as a takeout-only joint under the name Wings of Fire in 1994. It's since grown and adapted, moving to a dine-in model with additional locations in Castle Pines, Parker and Colorado Springs, where it will soon add a second outpost. There are currently nineteen flavor options to choose from, running the gamut from a zesty lemon pepper dry rub to the well-balanced signature Golden Flame sauce to spicier options like the new Tango Mango made with habanero chiles. The wings themselves are big, meaty and crisp, and they come out of the kitchen fast, hot and easy to bite off the bone. Bring a group and pair your basket of wings with a beer or mimosa tower, each of which holds eight servings. 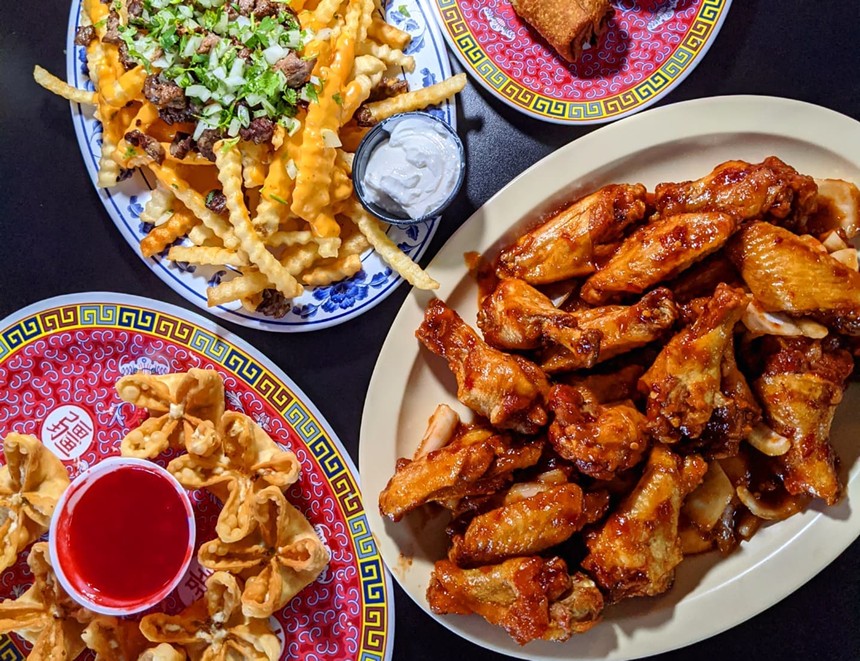 2251 South Parker Road
303-755-0771
piperinn.com
During the Piper Inn's more than five decades in business, the wings at the family-run joint have become legendary. Currently owned by Jed Levin, the Piper is also a biker bar with a unique menu that mixes classic bar fare and Chinese dishes, including Cantonese options like egg foo young and chow mein. The wings are available in classic Buffalo, a garlic dry rub, a seasonal option and Chinese style — fried in a wok and doused in a blend of oyster sauce and a secret Chinese spice mix. 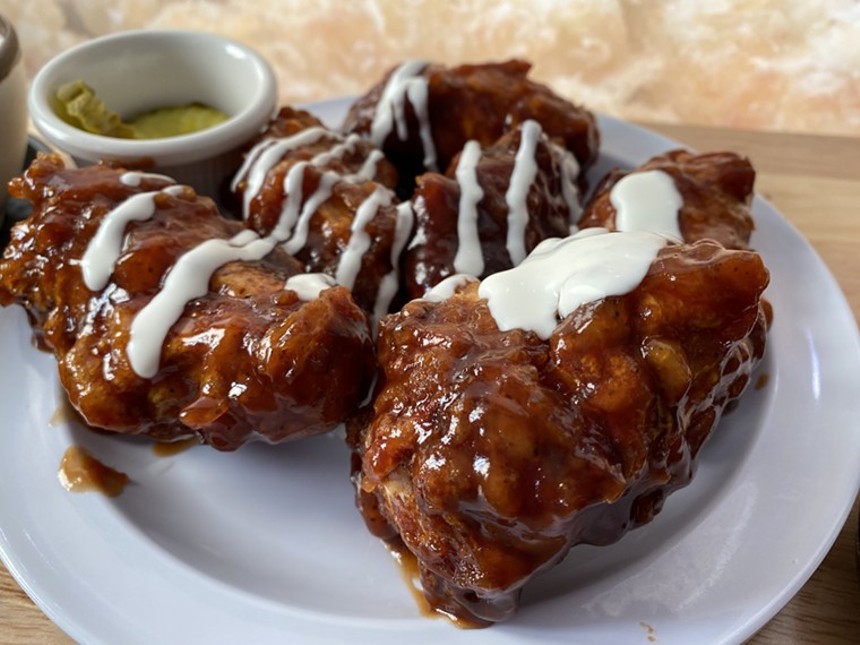 The Porklet was our pick for the Best Korean Fried Chicken 2022.
Mark Antonation

12201 East Mississippi Avenue, Aurora
303-364-1287
theporklet.com
The Porklet, with its adorable porcupine logo, is so named because pork cutlets are the specialty, jacketed in an almost painfully crunchy breadcrumb shell and dripping juice with each bite. But you'll also find two kinds of fried chicken on the menu at this little joint, which is small on space but big on flavor. The must-order: meaty wings that somehow manage to maintain their crunch beneath a sticky layer of sauce. Choose from options like sweet honey butter, tangy Buffalo, savory Garlic Bomb or the messiest of them all, the Black & White BBQ. The seasoning on the wings at Q House is perfection.
Molly Martin

3421 East Colfax Avenue
720-729-8887
qhousedenver.com
This upscale restaurant has some of the best modern Chinese cuisine in town. While the menu is filled with options that are worth coming back for time and time again, every experience here should start with an order of the wings. A mix of hefty drums and flats are served super-crispy with spot-on seasoning and a dousing of black bean-garlic oil. The bright tomatillo ginger sauce that comes alongside is a nice change from the typical ranch or blue cheese, but these wings are so good on their own, it's almost not necessary. Almost. The wings are one of many reasons to visit Savory Vietnam.
Molly Martin

2200 West Alameda Avenue
303-975-2399
savoryvietnam.com
Opened by a daughter of the founders of New Saigon in 2019, Savory Vietnam has a cavernous dining room and, somehow, an even bigger menu. We've yet to land on any duds while eating our way through the many selections, but we did find a new favorite in the form of the canh ga chien nuoc mam, deep-fried chicken wings in a spicy fish sauce that gives them an extra umami boost. If you go with a big group (which you should — this is the kind of place where sharing is key), consider getting two orders, because these will disappear quickly. 4004 West 38th Avenue
303-477-4460
This small spot near Tennyson that specializes in wings and burgers has only been open for eight months and has no official website, though a fan of the joint who lives in the neighborhood did put together some bare-bones information, including the menu, at twinswingsdenver.com. At less than $1 a pop, Twin's wings are a hell of a value, and they don't come up short on flavor or size: These babies are big, and available in ten sauce options, including a buttery garlic parmesan and a standard hot with a vinegary punch. They take about fifteen minutes to cook to order, so call ahead for the smoothest experience. 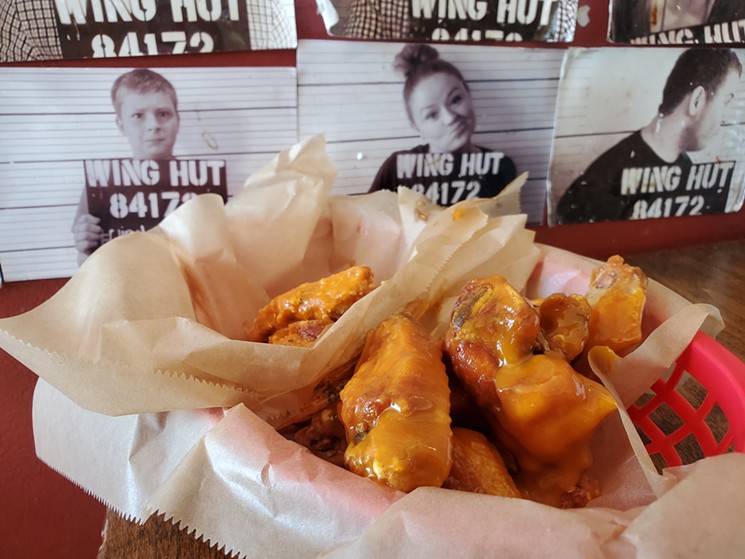 15473 East Hampden Avenue, Aurora
303-699-9464
winghutaurora.com
This small, family-owned spot has specialized in wings for over two decades, and the experience shows. The wings are on the smaller side, but with tender meat, a nice, crisp bite and a whopping 46 killer sauce and dry-rub options, size really doesn't matter. Not sure where to start? The garlic parmesan is a customer favorite, while the hot honey mustard offers a sweet and tangy experience with a kick. Orders are placed at the counter, and you can go half and half on flavors when getting wings by the pound — an essential move if you're going for variety. Wing Hut also has a lineup of Cajun items, including po'boys, gumbo, gator jambalaya and fried okra.
KEEP WESTWORD FREE... Since we started Westword, it has been defined as the free, independent voice of Denver, and we'd like to keep it that way. With local media under siege, it's more important than ever for us to rally support behind funding our local journalism. You can help by participating in our "I Support" program, allowing us to keep offering readers access to our incisive coverage of local news, food and culture with no paywalls.
Make a one-time donation today for as little as $1.