Nine Great Colorado Cheeses and Where to Find Them in Denver 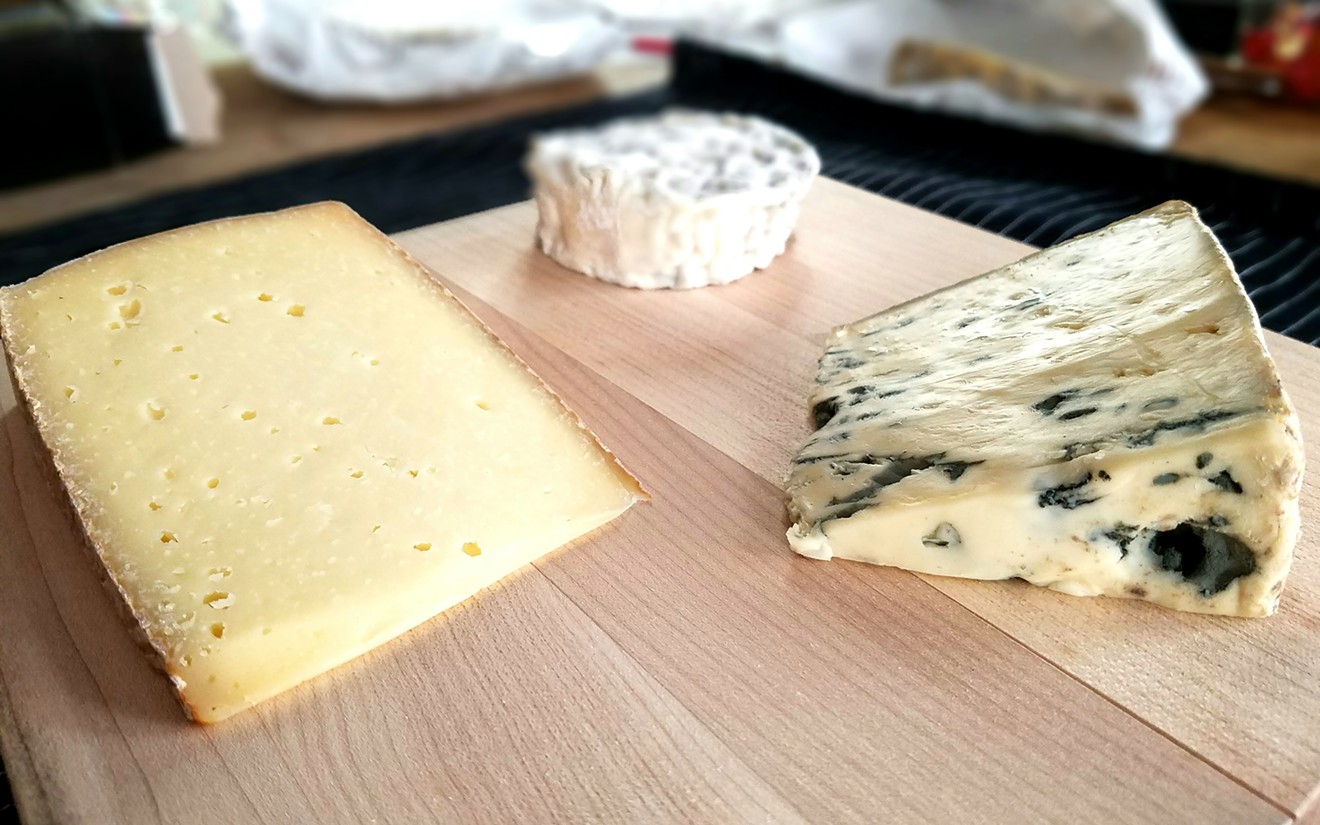 A whole bunch of yummy cheese from Cured in Boulder. Linnea Covington
The American Cheese Society is hosting its annual conference and Festival of Cheese (an event that's open to the public on Saturday, July 29) in Denver this week, aptly naming the entire group of events Cheese With Altitude. So what better time to talk about Colorado's own awesome cheese makers — who have plenty of altitude of their own? From creameries in Longmont to dairies in Basalt to goats frolicking in Keenesburg, these nine ventures show that the Centennial State is just as cheesy as the rest. Goats enjoying life in Paonia. Their milk is made into artisan cheese by the Avalanche Cheese Company.
Avalanche Cheese Company
Avalanche Cheese
Since 2008, chefs and cheese lovers have gone batty over the cabra blanca and chevre coming out of this Basalt company's creamery. Made with fresh goat's milk straight from owner Wendy Mitchell's farm and dairy in Paonia, each hunk of these goat cheeses taste like the grass, hay and high-mountain flora the animals consume. Using the same milk, Avalanche also makes a delicate and approachable blue cheese and semi-soft cheddar.

Find it: Cheese + Provisions is an excellent shop to visit to get local goods, including a few options from Avalanche. Or grab a seat at the Truffle Table and get a bite of this creamery's product on a cheeseboard. The cheese counter at Mercantile Dining & Provisions.
McCall Burau
Fruition Farms Dairy and Creamery
Chef/restaurant owner Alex Seidel started this Larkspur farm in September 2010 with a herd of forty ewes and a ram. Almost seven years later, his dairy and artisan sheep’s-milk cheese experiment has proven a success. Not only can you find the three cheeses — cacio pecora, fresh ricotta and feta — in Seidel's two restaurants, Fruition and Mercantile Dining & Provisions, but in many other eateries around the metro area.

Find it: At Mercantile Dining & Provisions in Union Station, you will find all three cheeses for sale in the cheese case. Coperta in Uptown also frequently serves the cheese, especially the cacio pecora. 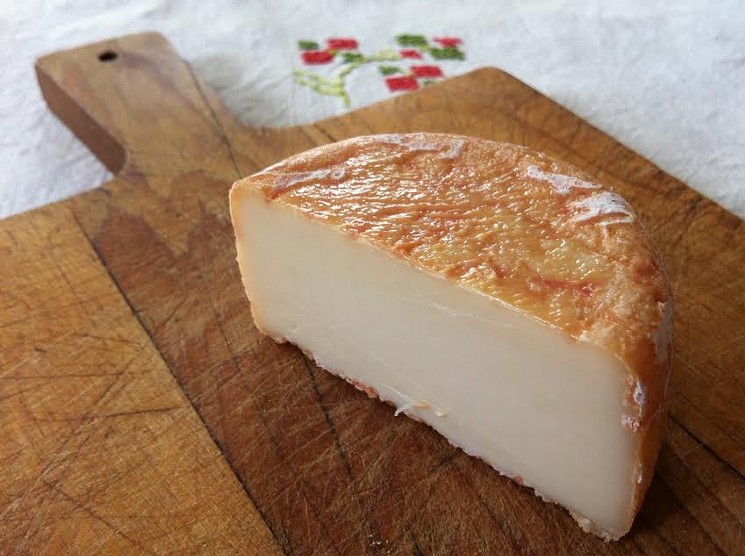 Haystack Mountain Cheese's aged, washed-rind raw cheese.
Haystack Mountain Cheese
Haystack Mountain Cheese
This may be Colorado's most popular artisan cheese — an honor that's well deserved. After all, owner Jim Schott has been making the stuff since 1988, when he and his wife bought five goats and a six-acre farmstead in Niwot. Within a year, his handmade goat cheeses were being sold in farmers' markets and to local chefs, and by 1992 the goods had made it into the bigger markets and Schott had garnered his first award. Today the creamery also sources goat's milk from the Skyline Correctional Facility dairy in Cañon City and the cheese-making operation is headed by cheesemaker Jackie Chang. Haystack Mountain, which was named after the mountain adjacent that first tiny farm, now makes dozens of cheeses, including bloomy rind, fresh, raw-milk and washed-rind.

Find it: Honestly, of all the Colorado cheeses, Haystack Mountain is the most prevalent. You will see it at just about every shop and on most cheese boards. That said, one neat application of the creamery's product can be found at Rioja, where the goat cheese adds its creamy texture to artichoke tortelloni. The folks at James Ranch have a wheel good time.
James Ranch/Facebook
James Ranch
This little creamery is located in the Animas Valley in the middle of a larger ranch that produces meat, eggs, milk and other farm-fresh goods. Though it's not the main focus, the cheese coming out of this farm proves well worth talking about. For starters, it's made with milk from 100-percent grass-fed cows, which gives the cheese a fresh and clean flavor. Owners and cheese gurus Becca and Dan James only make cheese at a certain time of year, but since the cheeses get cave-aged, you can find them year-round. Options include a twelve-month-old Leyden with whole cumin seed, a Colorado blue that has a smoky mushroom essence, and the three-year-aged Belford reserve, which has a profile similar to that of Gouda.

Find it: Get the Belford at Cured in Boulder. Otherwise, Durango is the best town to find James Ranch cheeses. 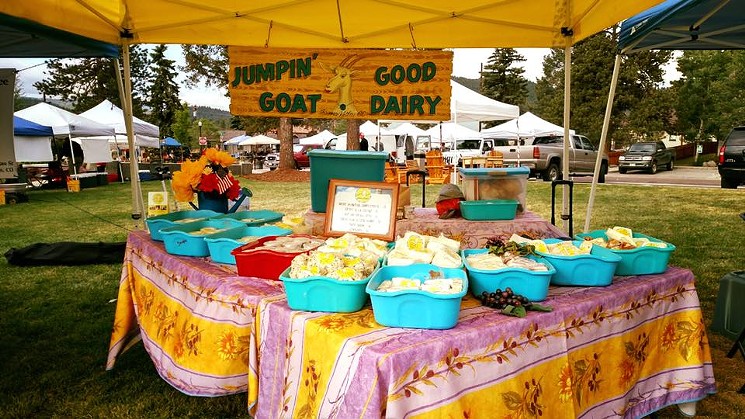 One of Jumpin' Good Goat Dairy farmers' market stands.
Jumpin' Good Goat Dairy
Jumpin' Good Goat Dairy
Dawn Jump founded this Buena Vista dairy in 2002 as way to mesh her love of goats and cheese. She also wanted to create a sustainable food for her local community. Today those farmstead goat cheeses remain popular and showcase not only her skill at cheesemaking, but also the terroir of the area. Jump makes a handful of cheeses, including feta, a wine-soaked cheddar, and fresh Mexican-style quesos. You can even find fresh goat-cheese curds, which we haven't seen anywhere else.

Find it: Boathouse Cantina in Salida fries Jumpin' Good Goat Dairy's cheese curds. You can also order any of the cheeses online.