Get Sauced With These Products Made by Hospitality Pros Turned Entrepreneurs Ali Schlichter left the restaurant world to create Chin Dribbliln'. Chin Dribblin' Specialty Sauces & Marinades
While the pandemic led to a lot of disruption for the hospitality industry, it also inspired creativity from longtime pros who decided to take a leap into entrepreneurship — including these three makers, who are now selling their own sauces online and at farmers' markets this summer. These products are perfect for barbecues — or any time you want to add a little flair to a meal — and they make great gifts, too. From a gluten-free steak sauce to coconut curry in a jar to habanero-bacon ketchup, you'll want to get your hands on these bottles ASAP.

What is your culinary background?
I've been cooking for sixteen years. When I was fourteen years old, I lied about my age to get the job and snuck into my first pizza shop. For years, I worked in pizza shops and gourmet sandwich shops to pay my way through college at CU Boulder to get a journalism and public relations degree. After, I spent four years learning everything I know from a boutique catering company called Fresh Tracks Catering. After I left there, I dove into pastry, and then I helped open and run multiple restaurants in Denver.

I helped open up Ohana Grille in Edgewater Public Market, I've done pastry at D Bar, and most recently, I ran Chop Shop on Colfax for three years. Then, once we made it mostly through the pandemic, I put my notice in at Chop Shop and dove head first into Chin Dribblin' Specialty Sauces & Marinades.
click to enlarge What do you make?
I make a steak sauce, an Asian Kung Pow sauce that is so good it's drinkable, and a curried beer mustard. The beer mustard was a fun collaboration with my friends at FlyteCo Brewery. The steak sauce and Asian sauce are both made with low-sodium tamari, so they are gluten-free and made with half the sodium and sugars [of many other sauces], but they definitely don't taste like it.

Since I’m a trained chef, I know how to make things taste amazing but disguise the "healthier for you" part. The Asian sauce is awesome with sushi, dumplings, pho, stir-fry and so on. The steak sauce also doubles as a Worcestershire sauce, so not only can you put it with meat and poultry, but you can add it to Bloody Marys, and it really packs a punch. The curried beer mustard is super unique, and no one has done it. It is sweet and super rounded out due to the curry, and it has a horseradish finish from the mustard seeds. I also sell sauce bundles that you are able to mix and match.

When did you start?
In November of 2020, I was starting to get overwhelmed with the pandemic work life. I doubled as a dishwasher, prep cook, butcher and head chef. I loved my job, but I knew I wanted a change. I knew the stress of opening a restaurant wasn't what I wanted or could afford to do. So a late-night conversation with a friend turned into an idea, which turned into a reality. I started producing on the side while running Chop Shop and then went full-time in July 2021.

Is it just you?
Yes it is just me. I am the chef, (SH)EO, social media manager, accountant, photographer, packing and shipping manager. You name it, I do it.

What's the hardest part of launching a food product?
The hardest part is the legality and food safety of an acidified food product. I’ve been working on getting FDA approval to sell in grocery stores, but it’s quite the process. I've taken process control classes, paid for countless licenses and done multiple batch and pH testing. We are super close but need a bit more paperwork and lab testing completed.

Where can we find you?
Right now, you can get my sauces online at chindribblin.com. You can also buy my curried beer mustard collaboration with FlyteCo at the brewery [4499 West 38th Avenue]. Starting next month, hopefully, I’ll have my sauce in multiple small-business shops around town. I will also be at the Evergreen Farmers Market [28253 Meadow Drive] every Tuesday through September from 10 a.m. to 2 p.m. 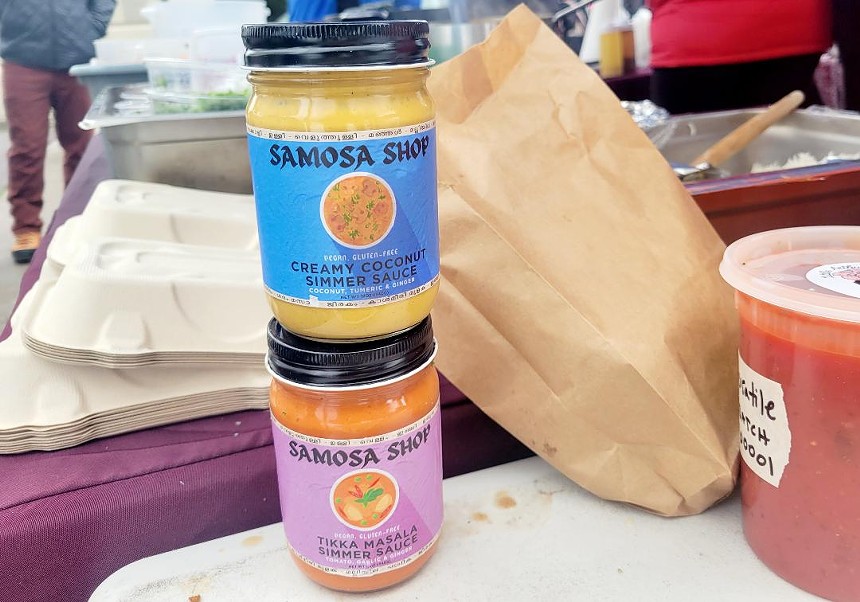 What is your culinary background?
I have been cooking since I was sixteen but doing it professionally for eight years. I went to the Culinary Institute of America in New York City in 2010, and after, I went to Aspen. I wanted to go into the weed industry — I told people I was going to go do cannabis in food, which I did. Then I worked at Hotel Jerome a little bit.

Later, I came to Denver and staged at ChoLon. I also worked at Acorn when it was opening and was the up-and-coming restaurant. That's where I met a lot of people: Caroline Glover [of Annette, who recently won the 2022 James Beard Award for Best Chef, Mountain] used to be my sous chef, and there was Bill Espiricueta of Smok, and Amos Watts of the Fifth String was my chef.

After working with them a while, I ended up finding Biju Thomas — or he ended up finding me. I worked with him developing the concept for Biju's Curry Shop [which closed its last location in 2020]. I was the culinary director there for three years and then did my own thing at the Preservery when it opened.

That's when the Food Network show Chopped found me. I took the $10,000 I won and traveled to Thailand, where I worked a few places. From there, I knew I needed to come back to Colorado, where I started to work with Biju again. Finally, I was with Jared Leonard [The Budlong Hot Chicken, AJ's Pit Bar-B-Q, Campfire, Au Feu and Grabowski's] at Stone Soup Collective. Then COVID hit, and now I am never going back. Samosa Shop is the journey I am meant to be on.
click to enlarge 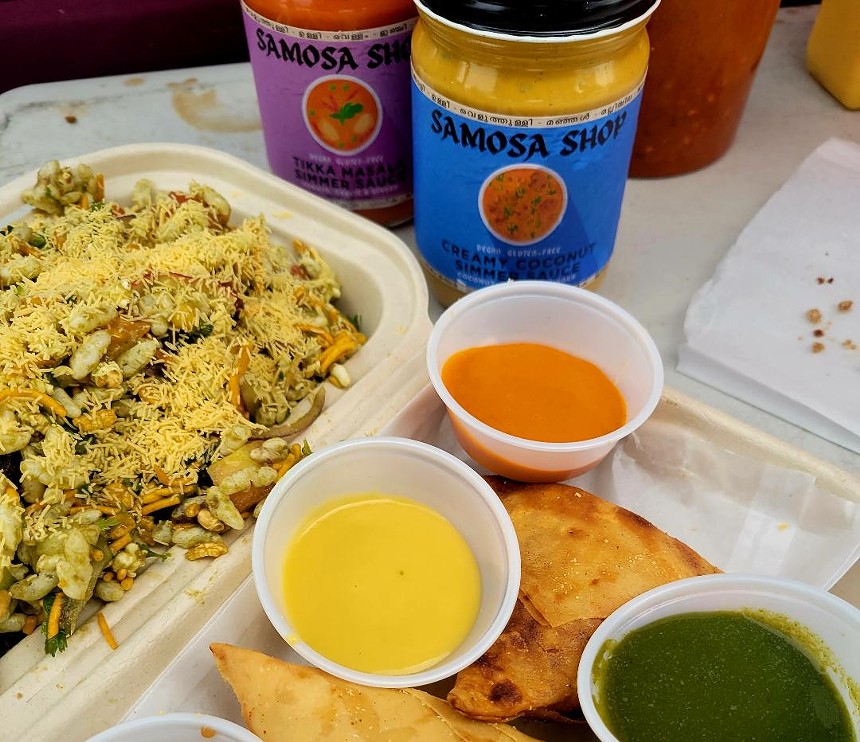 Samosa Shop makes tasty samosas, as well as sauces you can take home.
Linnea Covington
What do you make?
I make samosas, hot sauces and all things tasty. We take Indian street foods and mix in American flavors that I grew up eating. As for jarring sauce, I have creamy coconut, tikka masala and pepper sauce.

The coconut simmer sauce is my mom's coconut curry. It's the most classic South Indian-flavored curry that we have that's dairy-free. Coconut as an ingredient is very prevalent. It's what my mom made for comfort, and it's how my mom and grandma cooked.

Then there's the tikka masala. As Americans, we connect to butter chicken and tandoori chicken — we connect to that red sauce. This sauce can be done on pasta, pizza, fries — anywhere you'd use a tomato-based sauce, you can use the tikka sauce and it gives you that Indian flavor.

The hot sauce has been in my family for I don't know how many years. That flavor profile, I feel like no one has had it out here. This is all handmade and made with love.

When did you start?
I launched Samosa Shop in September 2020 and started jarring the sauces in April 2022.

What's the hardest part about launching a food product?
Just going out there the first time and seeing what response you get.

What is your culinary background?
I started my food and beverage career as a bartender and mixologist in Las Vegas, where I was born and raised. A few years in, I started working with a catering firm as its lead bartender, which progressed into cooking alongside some amazing chefs, including my mentor, Bill Miller [owner of the Texas-based chain Bill Miller Bar-B-Q]. I moved to Denver in 2018 and worked at Punch Bowl Social and Linger as a bartender.

When COVID hit, I didn't want to rely on someone else, and I wanted to get back into cooking. So I leased kitchen space out of TNT Sports Lounge in Arvada in September 2020. Our wings were ranked second best wings to try in 2021 by Denver Wing Associates on Instagram. Unfortunately, that environment was not a positive one, so I left, and in February 2021, I launched Doughboys with my brother, Michael "Qweta" Valdez, who is an executive chef with Snooze in the Denver Tech Center.

Then I did pop-ups called Denver BBQ Box with a friend, Carlos Mitter, which led to Lost Boys BBQ. But I ultimately decided to go full force with no more partners — now it's just me.

When did you start Lost Sauces?
My first bottle dropped in October 2021, and my main focus has been on promoting and selling in markets. This time next year, I hope to be in stores nationwide, and, of course, all the local hot spots in Denver. I offer bottles, packets and gallon size, so the sky is truly the limit for Lost Sauces.

What's the hardest part about launching a food product?
Learning something completely new. I faced certain challenges in my career as a chef and mixologist, but when it came to sauces, it was a total change — ratios, recipes, shelf life, the bottling process — but I love challenging myself.

Where can we find you?
I ship locally and nationwide, including wholesale. You can order at thelostsauces.com. I'm also in Wheat Ridge Poultry [5650 West 29th Avenue, Wheat Ridge] and at the Denver Bazaar at Sloan's Lake [4 to 8 p.m. Saturdays through September 24, 1611 Raleigh Street] and Street Food Social Lakewood [5 to 9 p.m. Fridays through September 30, 439 South Upham Street].
KEEP WESTWORD FREE... Since we started Westword, it has been defined as the free, independent voice of Denver, and we'd like to keep it that way. With local media under siege, it's more important than ever for us to rally support behind funding our local journalism. You can help by participating in our "I Support" program, allowing us to keep offering readers access to our incisive coverage of local news, food and culture with no paywalls.
Make a one-time donation today for as little as $1.