How the Best Was Won: Choosing Our Best of Denver Awards

Jeff Osaka revived twelve at [email protected] Mark Antonation
Sports analysts are fond of the phrase “To be the best, you have to beat the best.” But in the restaurant world, if you want to eat the best, well, you just have to eat everything. Because until you’ve sampled your way through the menus of eateries ranging from hole-in-the-wall taquerias to lavish steakhouses, you can’t get a grasp on a city’s culinary landscape. That’s why Westword’s team of food writers and editors scours Denver daily for the most delicious bites from hot new temples of modernist cuisine, mom-and-pop cafes, Chinese takeout joints and the vast selection of other restaurants, cafes, bars, food trucks and markets across the metro area. (And, yes, that means Boulder, Lakewood, Littleton, Aurora, Centennial and all of Denver’s other suburbs; good food does not observe municipal borders.) We write about our finds daily, too.

So when it comes to handing out our annual Best of Denver food and drink awards, we have the notes and receipts and waistlines to prove that we’ve done our due diligence, and that by “best,” we really mean the best — not just whatever we ate last night or heard about from a friend or simply repeated from a previous year’s picks. While a few of our choices in 2017 were winners in 2016, too, that’s just proof of how an individual chef or restaurant can consistently rise above other contenders. For example, Roaming Buffalo Bar-B-Que, at 2387 South Downing Street, just snagged its second Best Barbecue award — and the competition was fierce.
The past two or three years have seen an explosion of great smokehouses in Denver — as well as a bit of a shakeout. One of our favorite spots, Owlbear Barbecue at Finn’s Manor, closed up shop just days before our selections were finalized. (The good news is that Owlbear promises to return with its own brick-and-mortar restaurant soon.) And earlier this year, Globe Hall, practitioner of a great Texas-style ’cue, changed hands — and the loss of the infectious, nerdy ’cue enthusiasm of original owner Jeff Cornelius seemed to weigh on the little joint. Up in Westminster, the strong and steady offerings of GQue Championship BBQ continue to impress; in the end, our choice came down to a preference of style, not quality. But places like GQue and Roaming Buffalo are tasty reminders of just how far Denver’s barbecue scene has come.

Brunch is another hot category in a city positively obsessed with the notion of hanging out on sunny Saturdays and Sundays, sipping morning cocktails and loading up on all manner of eggy dishes and sweet, sinful creations. There are the big, breakfast-only kitchens that excel at pancakes, omelets and eggs Benedict, but there’s also been a recent proliferation of neighborhood dining rooms that practice New American cooking during the week and then turn up the creativity a notch for weekend brunch. With such abundance, one misstep, one runny egg white, flattened flapjack or separated Hollandaise sauce can spell disaster; it’s just too easy to pack up the brunch crew and head down the block to the next hot ticket. One place that doesn’t suffer such missteps is Beast + Bottle, 719 East 17th Avenue. The dinner menu at the cozy Uptown eatery is one of the best in town, and the fare is just as impressive at brunch. Beast + Bottle shouldered aside some big-name competition with its attention to detail, unique recipes and lovely service (even as most servers around town grumble and glower through mid-morning turns).

The toughest choice, though, was engendered by our most prestigious award: Best New Restaurant. To win, it takes more than just a clever concept, a dining room packed with Denver’s hippest crowds, or a star chef in the kitchen. Here, being the best really does mean beating the best — dedicating each night to great customer service, consistently excellent and innovative food, and a good value for guests. Diners need to feel like they’re getting their money’s worth, whether they’re spending $10 on a sandwich or $200 on a special-occasion dinner. Any unknowns or uncertainties can affect the perception of a great evening out. 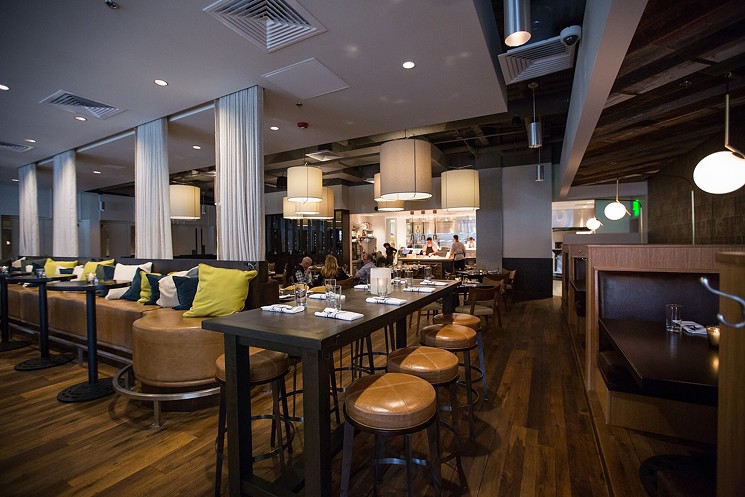 Avelina was one of the best new restauants of 2016.
Danielle Lirette
And in this area, the competition was particularly heated; Close to 300 new places opened in metro Denver in 2016. For food awards in the Best of Denver, we use the same must-have-been-open-for-three-months policy that applies to our restaurant reviews, allowing time for adjustments and shakeouts in the kitchen. But sometimes the shakeouts take a little longer to hit: Avelina, which opened last summer, was one of our finalists for Best New Restaurant — and then executive chef John Broening and his wife, pastry chef Yasmin Lozada-Hissom, resigned on March 15, just two weeks before the Best of Denver edition was due to hit the streets. This was more than a chef shuffle; Broening and Lozada-Hissom wrote the menus, schemed the concept (along with out-of-state owners Urban Food Group) and trained the kitchen staff in an array of complicated and exacting dinner and dessert dishes. While the restaurant itself remains in capable hands, Broening and Lozada-Hissom were at the heart of Avelina’s kitchen; they created the dishes that wowed Gretchen Kurtz when she gave the restaurant her first rave of 2017.

While a follow-up meal indicates that Avelina still rates among the city’s best new restaurants (and readers made it their pick), our clear winner for Best New Restaurant was chef/restaurateur Jeff Osaka’s [email protected]. Osaka’s newest shop is a definite reflection of his personality and his culinary style — along with that of the team he has gathered to help him execute his vision. Without him, [email protected] would be a completely different beast.

In many ways, the winner of the Best New Restaurant award isn’t our choice, it’s merely our observation. Being the best is the choice of the owners, chefs, general managers and staff who work hard every day to provide consistent excellence for customers spending money at their establishments. Cheers to those who succeed, earning our recognition year after year. You’ve beaten the best so that we can all eat the best.
click to enlarge

Simplicity is the key to this dish at [email protected]
Mark Antonation
KEEP WESTWORD FREE... Since we started Westword, it has been defined as the free, independent voice of Denver, and we'd like to keep it that way. With local media under siege, it's more important than ever for us to rally support behind funding our local journalism. You can help by participating in our "I Support" program, allowing us to keep offering readers access to our incisive coverage of local news, food and culture with no paywalls.
Make a one-time donation today for as little as $1.