The Eleven Best Wood-Fired Restaurants in Denver and Boulder 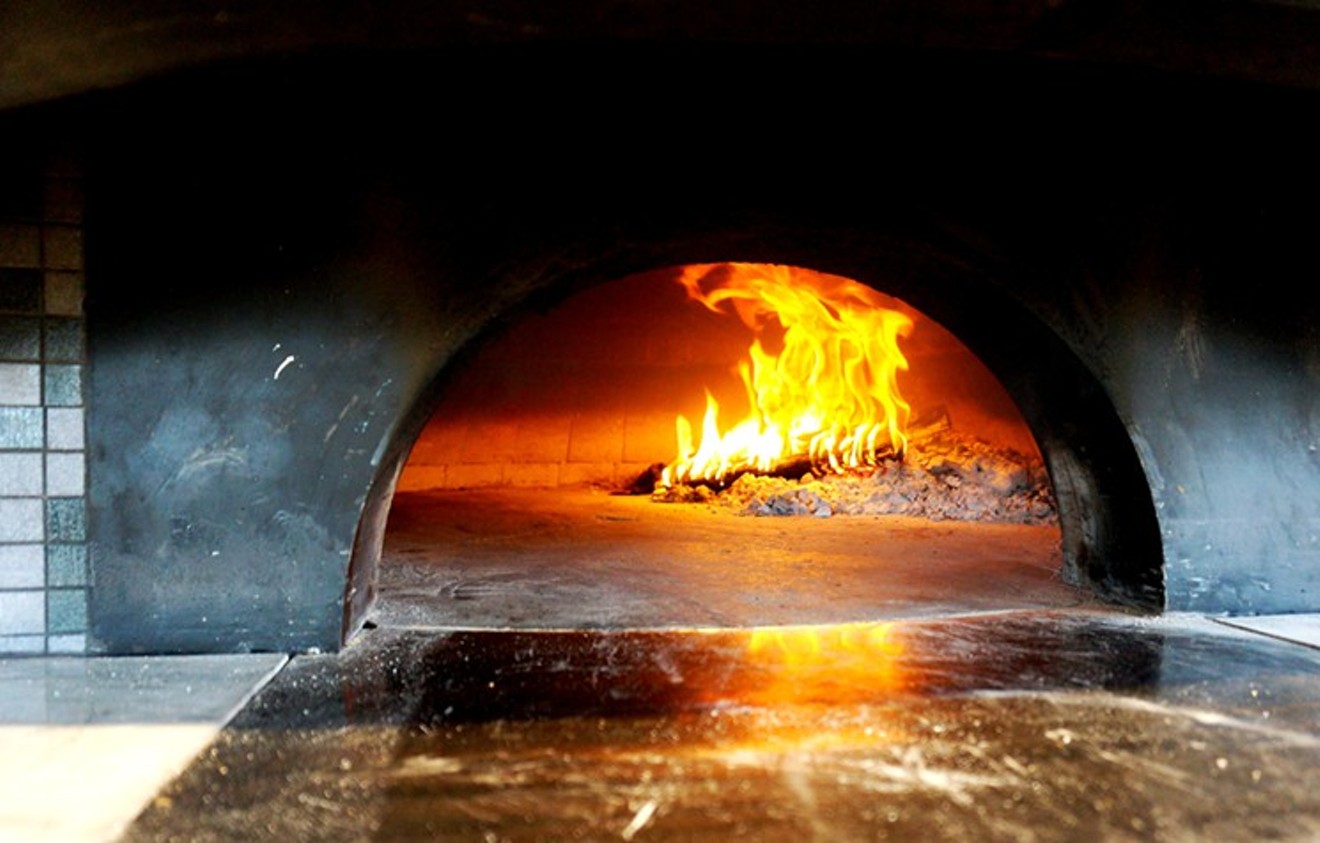 The flavor of wood is an integral ingredient at restaurants like Cattivella. Mark Antonation
Cooking over hardwood is a red-hot trend right now, and many new restaurants are outfitting themselves with grills, ovens and rotisseries fueled by oak, hickory, mesquite and fruit woods. Newcomers are adding a smoky note to the skies over Denver, along with many older favorites. Here are the twelve best wood-fired restaurants in the metro area — keeping in mind that we're leaving barbecue and primarily-pizza places for another day. 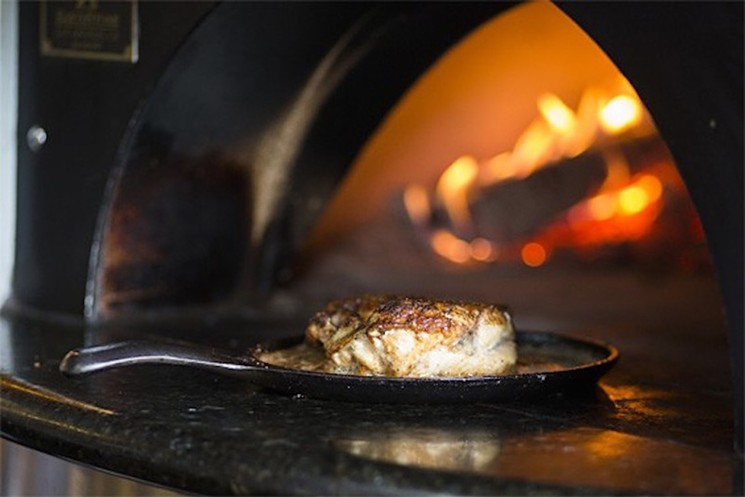 Acorn heats up the Source with oak-fired cooking.
Danielle Lirette
Acorn
3350 Brighton Boulevard
720-542-3721
Acorn, which opened in September 2013, doesn’t fall too far from its older sibling, Boulder's Oak at Fourteenth (which also made this list). The space is different, of course: Acorn takes full advantage of the ultra-urban, industrial-chic feel of the Source, with plenty of exposed brick, metal ducts and graffiti. But the menu embodies the same "wood-fired seasonal cooking" that's made Oak one of Boulder's most inspiring — and popular — restaurants, here focusing more on small plates, and a few very large plates, rather than dividing dishes by more traditional courses. 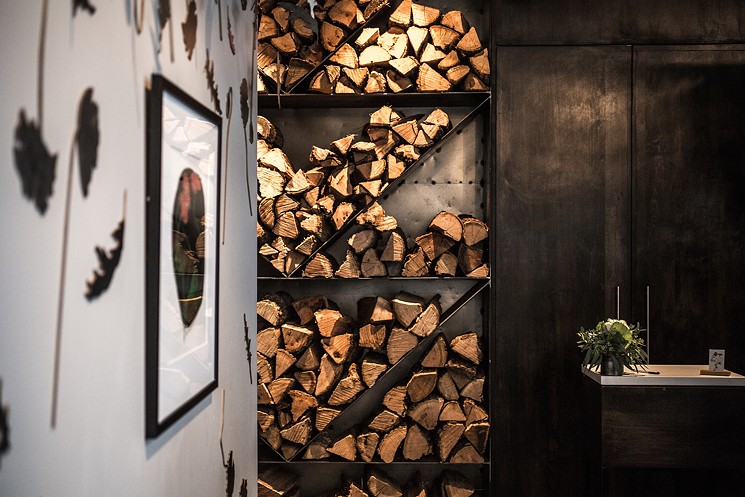 Stacks of wood are a hint of what you're in for at Annette.
Danielle Lirette
Annette
2501 Dallas Street, Aurora
720-710-9175
Located in Stanley Marketplace, Annette follows in the footsteps of many small-plates eateries that anchor our dining scene, not least of which is Acorn, where chef/owner Caroline Glover previously worked. Seasonal ingredients are revered, and pickled accents pop up everywhere. A wood-fired grill adds a cozy rusticity that you smell when you walk in the door. The restaurant is at its best when showcasing Glover’s take on comfort food: pillowy gnocchi, or whole wood-grilled fish with Calabrian chile jam, grilled carrots and snap peas. 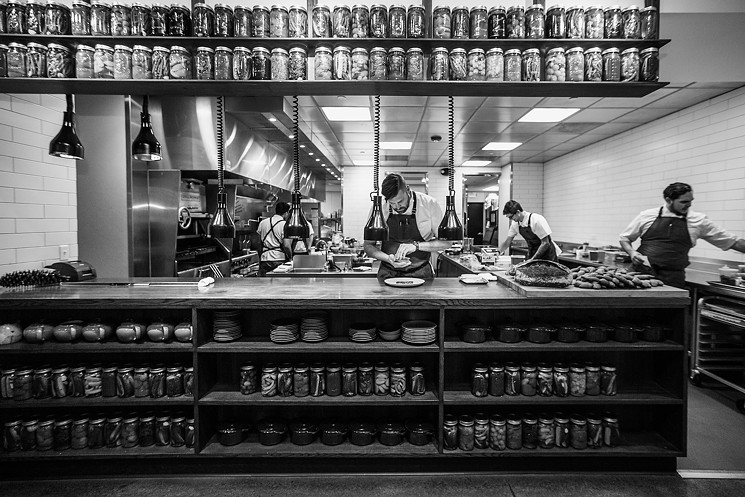 Arcana aims for rustic Americana with an upscale twist.
Danielle Lirette
Arcana
909 Walnut Street, Boulder
303-444-3885
When Arcana opened in 2016, the mission of this high-aspiring Boulder restaurant was to explore what it calls “the true identity of American cuisine,” putting out elaborate, special-occasion fare. Under chef/partner Kyle Mendenhall, the restaurant adds the rustic elements of smoke and char to its seasonal Colorado cuisine, with an intriguing nod to history in touches such as slapjacks and kitchen pepper. The restaurant goes to extra lengths, baking its own bread and making its own cultured butter; the simplicity of both allow diners to taste the wood flavors captured in the bread.

Bar Dough
2227 West 32nd Avenue
720-668-8508
To mistake Juan and Katie Padro's Italian eatery, which opened right next door to their Highland Tap & Burger in the fall of 2015, for just another wood-fired-pizza joint would be to miss out on the Italian and Italian-American fare from chef-partner Max MacKissock and new executive chef Carrie Baird. Handmade pastas dressed in traditional (and not-so-traditional) sauces tempt alongside fire-roasted carrots and meats like porchetta that pick up a hint of smoke.

Basta
3601 Arapahoe Avenue, Boulder
303-997-8775
Chef/owner Kelly Whitaker has a passion for grains, bread and baking, which is evident in the wood-baked loaves and pizzas at his Boulder restaurant. But pizza isn't the only thing Whitaker cooks in the Italian dome oven: a selection of seasonal and rustic small plates — all kissed with smoke — and a few larger plates focus on simplicity and the ingredients at hand. 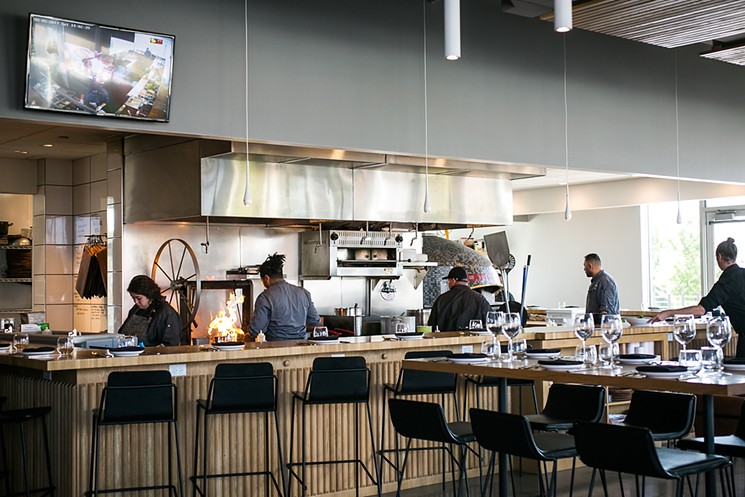 Wood fuels both the grill and the oven at Cattivella.
Danielle Lirette
Cattivella
10195 East 29th Avenue
303-645-6779
With Cattivella (which means "naughty girl"), chef/owner Elise Wiggins has created the kind of restaurant that reflects her many experiences traveling, working and eating in Italy. There's the wood-fired pizza oven used for far more than just pizzas; even beans are slow-cooked in glass flasks nestled in hot embers. There's the adjustable wood grill that gives meats (much of it brought in whole, then butchered and dry-aged on site) and vegetables a rustic, old-world depth of flavor. And there are the housemade breads and pastas that separate Cattivella from the standard bistro or trattoria. You're sure to feel spoiled — and even a little naughty — enjoying all types of delights at this unabashedly Italian eatery.