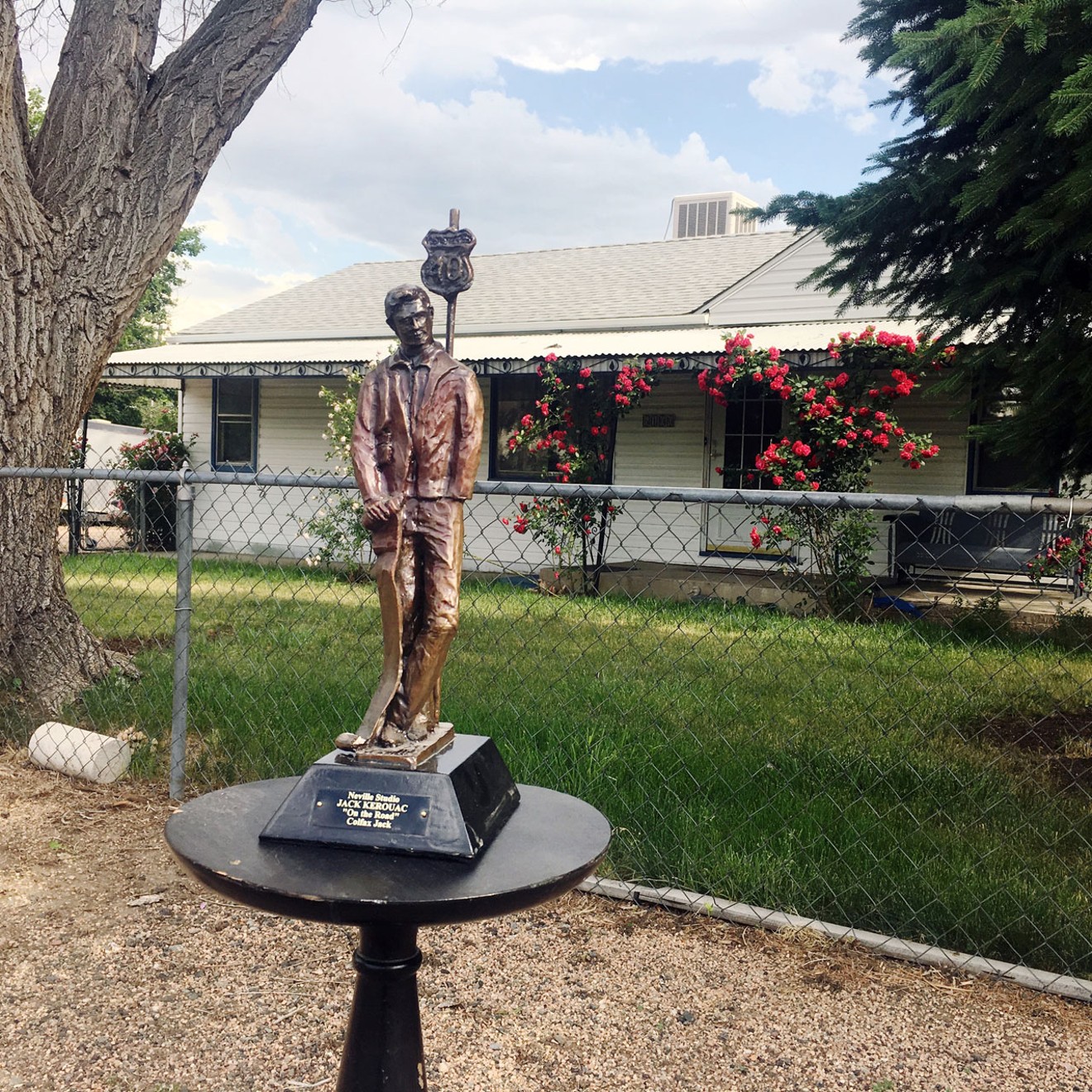 Howard Neville's sculpture of Jack Kerouac in front of the Lakewood home he once owned. Jonny Barber
Jack Kerouac immortalized Denver in On the Road, his most enduring work, writing about his trips down Larimer Street and watching a ballgame on Welton Street. But he also traveled further afield. In 1947, Kerouac went to Central City to see Beethoven’s Fidelio presented by Central City Opera. “It was a wonderful night,” he recalled. “We approached the lights around the opera house down the narrow dark street; then we took a sharp right and hit some old saloons and swinging doors. ... We started off with a few extra-size beers. There was a player piano. Beyond the back door was a view of mountainsides in the moonlight. I let out a yahoo. The night was on.”

The night was often on for Kerouac.

Two years later, he returned to Denver after selling his first novel, The Town and the City, and bought a house at 6100 West Center in what is now Lakewood. (That city just celebrated its fiftieth anniversary of official incorporation.) Waiting for his family to join him, the author took a boy to Lakeside Amusement Park, where they “rode around a sad little lake in a toy railroad.”

And seventy years ago this month, Kerouac wrote to Neal Cassady, Denver’s self-described “unnatural son” who became Dean Moriarty in On the Road, about his home, where “just an hour ago I was standing in my yard looking at the great heat lightning over the plains, and to the west over the mountains. ... I had a desire to go in both directions at the same time.’’

Kerouac chose to head east not long after, selling the house and returning to New York in August 1949.

But remnants of Kerouac live on here. Artist Howard Neville created a sculpture of the author standing on Colfax Avenue, which he donated to the Colfax Museum, Jonny Barber’s project that recently lost its own home in Lakewood. While Barber looks for a new location, he took time out to shoot a photo of Neville's Kerouac sculpture in front of the home where the author lived seventy years ago. 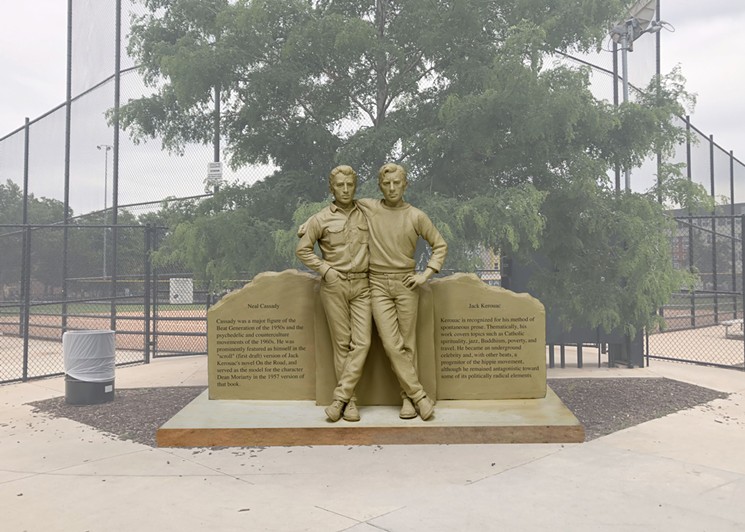 How Sutton Betti's sculpture would look in front of the ballfield where Jack Kerouac saw a game.
courtesy Mark Bliesener
And there’s another sculpture project in the works: Mark Bliesener, director of Denver’s annual Neal Cassady Birthday Bash, and John B. Lane are leading a campaign to commission a bronze sculpture of Kerouac with Cassady.

Bliesener reports that they raised enough money to create a prototype of the proposed work by Loveland sculptor Sutton Betti that should be done in a few weeks and will be used as a “maquette” for a life-sized monument — and also as inspiration for additional fundraising. Bliesener estimates the project could require close to $100,000, but he already has a perfect spot in mind for the statue: right in front of Sonny Lawson Field, the ballpark where Kerouac watched games seventy years ago, later immortalized with this in On the Road:

“Down at 23rd and Welton a softball game was going on under the floodlights which also illuminated the gas tank. A great eager crowd roared at every play. The strange young heroes of all kinds, white, colored, Mexican, pure Indian, were on the field, performing with heart-breaking seriousness. Just sandlot kids in uniform […] Near me sat an old Negro who apparently watched the games every night. Next to him was an old white bum, then a Mexican family, then some girls, some boys - all humanity, the lot. Oh, the sadness of the lights that night! The young pitcher looked just like Dean. A pretty blonde in the seats looked just like Marylou. It was the Denver Night; All I did was die."
KEEP WESTWORD FREE... Since we started Westword, it has been defined as the free, independent voice of Denver, and we'd like to keep it that way. With local media under siege, it's more important than ever for us to rally support behind funding our local journalism. You can help by participating in our "I Support" program, allowing us to keep offering readers access to our incisive coverage of local news, food and culture with no paywalls.
Make a one-time donation today for as little as $1.