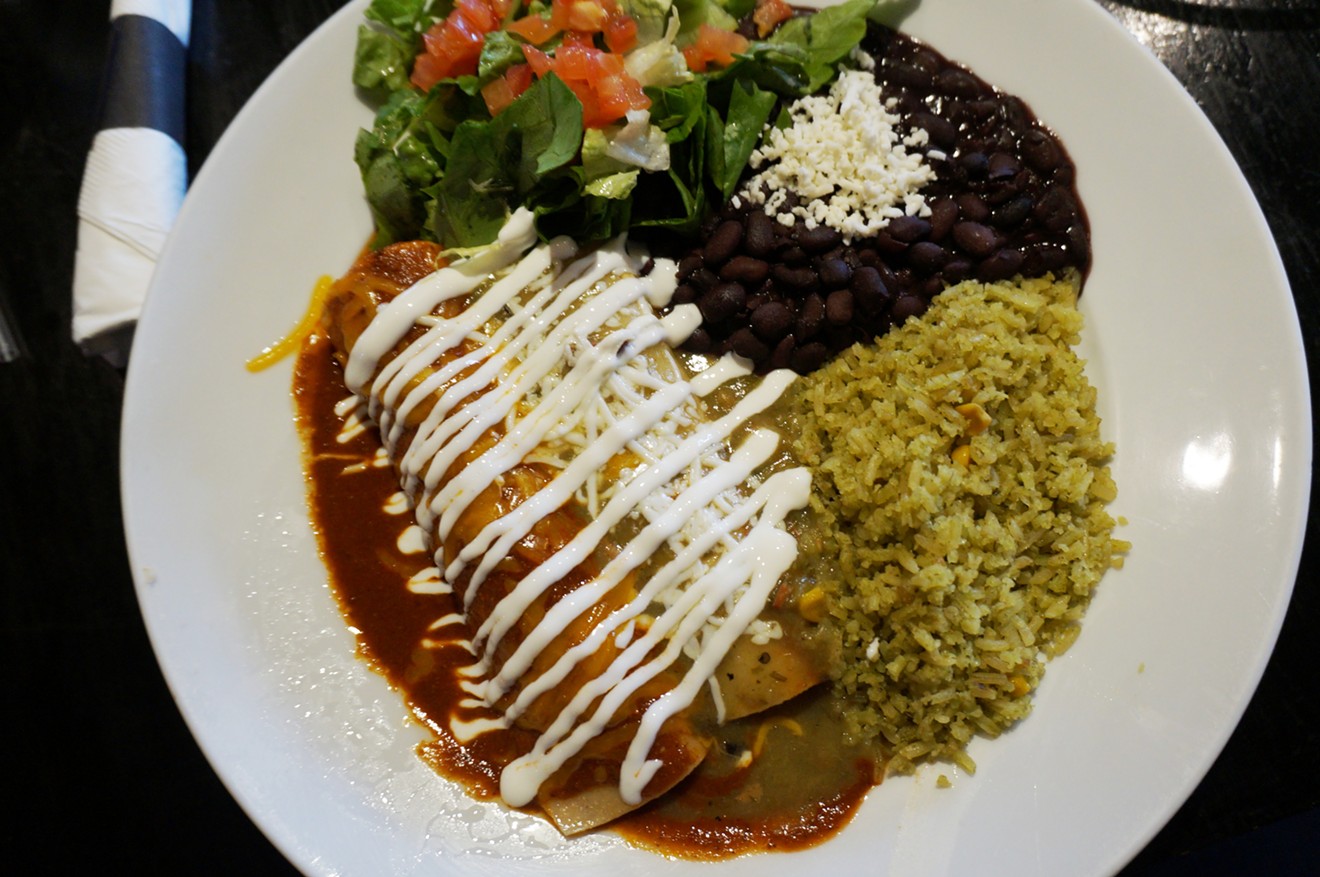 100% de Agave isn't New Mexican, but the Christmas enchilada plate is still festive. Mark Antonation
“Red or green?” the server asks yet another customer during lunch service at Little Anita’s Foods of New Mexico, a Denver branch of an Albuquerque original that’s been smothering stacked enchiladas and burritos for more than forty years. She doesn’t have to ask the question of every diner; regulars blurt out their full orders without needing to be prompted. Others stumble over words like “adovada” and squint at the menu as if it were written in a foreign language. Those are the ones who didn’t grow up in the Southwest, where Spanish words are part of the cultural topography; these newbies often need a tutorial in the difference between green chile and red chile, and why the latter bears little resemblance to chili con carne.

And every once in a while, someone simply responds, “Christmas.”

Even if you’ve never encountered anyone ordering an entree smothered in both red and green chile, the meaning of “Christmas” is instantly clear: Just asking for pools of the two sauces makes you think of a smartly wrapped gift under the tree or a pine wreath adorned with a crimson bow, even if the colors of those two sauces are a lot muddier on the plate than the holiday mainstays that deck your halls. While Christmas is a year-round affair at most Mexican restaurants that offer the option, as we head into December, the aromas of two kinds of chiles rising off a steaming platter can be as welcome as a visit from Saint Nick himself.

Where can you find such a tempting package in Denver? In more places than you might think. The menu at 100 % de Agave (975 Lincoln Street) lists enchiladas with a choice of meat fillings and either red or green chile. When you’re in New Mexico, Christmas-style saucing is so commonplace that it usually isn’t mentioned on a menu; people just know to ask for it. Because 100% de Agave isn’t New Mexican (most of the focus is distinctly south-of-the-border), we were hesitant to order our enchiladas Christmas-style, but the server assured us that he and the rest of the staff are familiar with the term. In fact, the restaurant’s POS system is programmed with “Xmas” as an option, to let the cooks know to add both red and green chile. 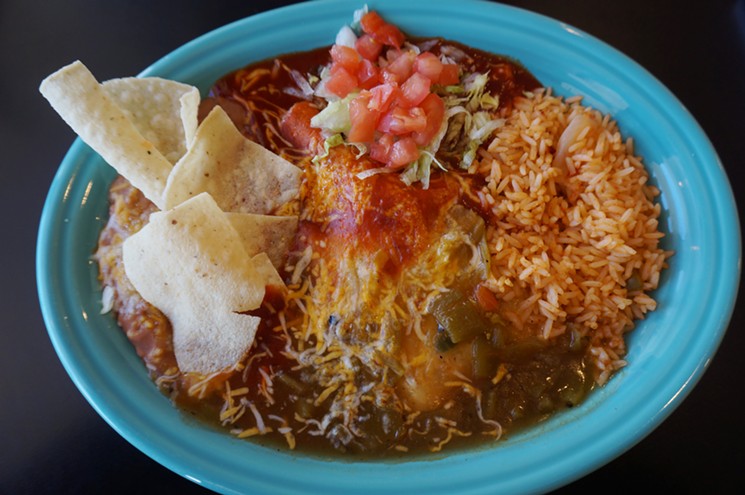 Little Anita's didn't invent Christmas, but the company has been serving enchiladas that way for more than forty years.
Mark Antonation
For just $9, the lunchtime enchilada plate comes with two enchiladas, beans, rice and salad. Shredded beef is an excellent choice, but you can also get steak for an additional $3. Ordering the plate Christmas-style results in side-by-side enchiladas robed in two distinct sauces: a mild red with the slightly toasty flavor of dried chiles, and a smooth green that falls more into the salsa verde category than chunkier Southwestern green chile. It’s a satisfying lunch (especially with a free basket of chips and salsa), but it’s probably not the kind of Christmas that a New Mexico transplant is expecting.

For that, the next stop is Little Anita’s, founded by Larry Gutierrez in 1976 in a historic district of Albuquerque. Gutierrez still runs the show, though the company has grown from a mom-and-pop eatery serving family recipes to a chain with two Denver-area outposts (at 1550 South Colorado Boulevard and 6882 South Yosemite Street in Centennial). At the Colorado Boulevard location, you can confidently order your burrito or enchiladas (stacked, not rolled) Christmas-style without fear of being misunderstood; it’s just part of the restaurant’s culture.

Speaking from his Albuquerque office, Gutierrez acknowledges that Little Anita’s didn’t invent the idea of topping plates with both red and green chile. But, he says with a laugh, “that would be a good story.” Customers have been ordering it that way for as long as he can remember, Gutierrez adds; he suspects that the name and idea date very far back into New Mexico’s long restaurant history.

Little Anita’s makes both its green and red chiles in big batches and ships them to the various restaurant locations throughout the Southwest; the flavors stay true to Gutierrez’s mom’s recipes. The red is just a little smoky and bitter from sun-dried red chiles, and the green is simple and chunky with diced Anaheims; combined, they’re the essence of New Mexico, imported right up I-25.

Merry Christmas from Santo in Boulder. Not even an edge of the stacked enchiladas peeks out from beneath red and green chiles.
Mark Antonation
For those craving a more hands-on approach to food from the Land of Enchantment, head to Santo, at 1265 Alpine Street in Boulder. Chef Hosea Rosenberg (who also runs the nearby Blackbelly and Blackbelly Butcher) grew up in Taos and is a perfectionist when it comes to red and green chile. For the green, “they’ve gotta be Hatch chiles,” the chef explains. His Santo kitchen crew makes the green chile vegetarian and gluten-free, thickening the sauce with masa, which adds a slight background note of toasted corn. The red is another straightforward recipe (also vegetarian and gluten-free) that relies on whole dried New Mexico red chiles supplemented with Chimayo chile powder. “Anything that we serve with red or green chile can also be ordered Christmas,” Rosenberg says.

The combination of the two sauces on one dish — stacked blue-corn enchiladas, say, or Navajo fry bread — provide alternating hits of smoky, earthy red chiles and bright, grassy green chiles that register as eye-opening but not painful on the heat scale. And where they bleed together at the center of the plate, something magical happens as an entirely new sauce is created. 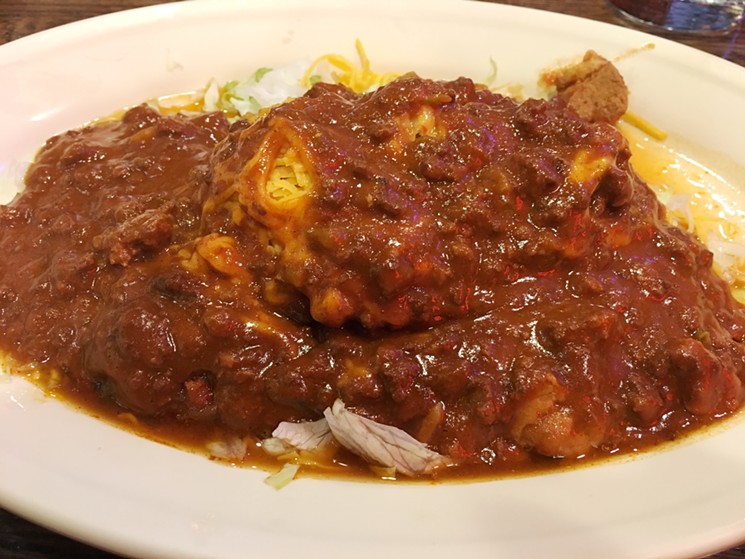 There's a Brewery Bar burrito somewhere under the red and green chile.
Westword
Detecting the subtleties of two sauces ladled onto one plate isn’t something you’ll have to worry about at Brewery Bar II (150 Kalamath Street); there’s nothing subtle about the fare at this decades-old eatery. Manager Jennifer Jackson explains that when a customer orders a burrito Christmas-style, the green chile — a powerful concoction studded with chiles, tomato and chunks of pork — goes on first, followed by beefy red chile that’s more akin to, yes, chili con carne. The sauces are served on top of each other rather than side by side, so every bite contains a mixture of the two. If the brawny burrito is a little intimidating, you can get in the Christmas spirit with tamales, chiles rellenos, enchiladas or even smothered tostadas (something you’re not likely to find outside of Brewery Bar).

You can try your luck ordering Mexican dishes smothered Christmas-style just about anywhere that red and green chile are made. You may get a puzzled look from a server, but it’s more likely that you’ll be rewarded with a major helping of Christmas cheer.