Twelve of the Best Things to Do in Denver Today

It's been a big, big weekend in Denver, with several theater companies opening their seasons, Oktoberfest events rolling out all along the Front Range and the long-anticipated opening of Meow Wolf's Convergence Station. (While tickets for this weekend are sold out, you can snag them for a midweek visit here.)

Don't miss our list of the top free events in town, and keep reading for twelve more of the best events in and around Denver:

Chatfield Corn Maze
Sunday, September 18, 9 a.m. to 5 p.m.; continuing Fridays, Saturdays and Sundays through October 31
Chatfield Farms, 8500 West Deer Creek Canyon Road, Littleton
Corn maze season has commenced in Colorado, which means it’s time to get lost at the Denver Botanic Gardens' Chatfield Farms, where this year’s seven-acre maze resembles a giant honeycomb. There’s also a mini-maze for kids under ten, carnival-style food, a barrel train and regular Chatfield attractions — and you can even reserve an escape room experience for an additional fee. Admission is $10 to $15 (children two and under free); learn more here.

Curtis Street Home, Garden and Walking Tour
Sunday, September 19, 10 a.m. to 3 p.m.
Montessori Academy of Colorado, 2500 Curtis Street
Like many of Denver’s oldest neighborhoods, Curtis Park is in flux, caught in the shadow of new development and RiNo’s glitzy makeover. But plenty of beautiful and carefully restored late-nineteenth-century Victorian homes remain, including the eight abodes (and two gardens) opening up to the public for the weekend. Admission is $25; learn more and get tickets here.


Denver Oktoberfest
Sunday, September 18, 11 a.m. to 6 p.m. (and again next weekend)
Larimer between 20th and 22nd streets
Roll out the barrel! It's the 51st annual Oktoberfest blowout in downtown Denver, full of oompah bands, beer, food and fun, including keg bowling, happy hour and stein hoisting. Tickets start at $45 for the first weekend; get all the details and see ticket options here.

Boundless Truth: Women’s Stories of Freedom and Incarceration
Sunday, September 19, 2 and 5 p.m.
Dairy Arts Center, 2590 Walnut Street, Boulder, and on Zoom
Motus continues its Unbound series, this time presenting the autobiographical monologues of seven Black women leaders who were formerly incarcerated, detailing the damage done in the name of justice. The stories will be split between two performances; both will include musical responses by Colorado’s Spirit of Grace — a cappella social justice singers — and a special performative response from IWADDE, the Intergenerational Woman’s African Drum and Dance Ensemble. Tickets are $15 to $50; find out more here.

Fun on Federal
Sunday, September 19, 4 p.m.
Adams Mystery Playhouse, 2406 Federal Boulevard
Fun on Federal is back for a seventh year. Catch an improv comedy show at the Adams Mystery Playhouse, then sample food and drinks at nearby restaurants, including Sexy Pizza, El Cazo, Jefferson Park Pub, Whirlybird Ice Cream, and Federal Bar and Grill. It's sponsored by the Federal Boulevard Business Improvement District, and tickets are $10; get yours here.

Cosmic Circus
Sunday, September 19, 5 p.m., and again September 23-26
Enigma Bazaar, 4923 West 38th Avenue
Looking for a whole new concept in wining and dining? Check out what's cooking at Enigma Bazaar, an art bar with seasonal cocktails and highbrow Latin dishes from chef Edwin Sandoval, and cosmic entertainment ranging from music, dance and theater to film, circus arts and tarot readings. After a soft opening, Enigma is kicking things off officially over two weekends with Cosmic Circus, a show that’s a mixture of all of the above. Find more information and tickets, $30, here. 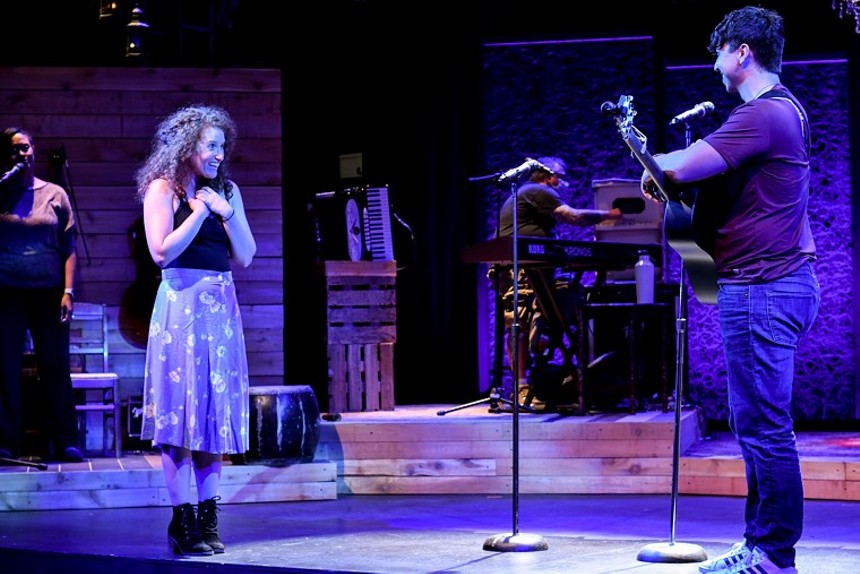 Steph Holmbo and Runner Francisco in the Aurora Fox's production of Hundred Days.
Elicia James
Before You Go
Through Sunday, September 19
Miners Alley Playhouse, 1224 Washington Street, Golden, and online
John Ashton's play inspired by his own family debuted at Miners Alley earlier this month, and while you can see it at the theater, you can now watch it on demand, too. Three siblings wind up back home for an unexpected family reunion. “There are parts where there are laughs and parts where we tug at heartstrings and parts where I think I’m saying something significant," says Ashton. "Also, opportunities to feel insecure and that you’re not dealing well." On-demand tickets are $15 here; get the in-person performance schedule and buy tickets here.

The Lifespan of a Fact
Through October 16
Curious Theatre Company, 1080 Acoma Street
Curious Theatre Company returns to live theater and a fine new season with The Lifespan of a Fact, by the team of Jeremy Kareken, David Murrell and Gordon Farrell. It’s the story of the tooth-and-nail feud between an obsessive-compulsive fact-checker hired by the editor-in-chief and a writer who sees nothing wrong with stretching the truth for the sake of a good story. Who wins? To find out, get tickets, $28 to $50, here.

Sojourners Project: Busing
Through September 26
Rear Parking Lot, Rising Star Missionary Baptist Church, 1500 South Dayton Street, Aurora
Lisa Young of IDEA Stages and Patrick Mueller of Control Group Productions, masterminds from two different performing-arts worlds (Black theater and immersive dance theater) got together to collaborate on the Sojourners Project: Busing, an intergenerational, immersive retelling of a divisive piece of history in the Denver Public Schools: The story of Rachel Noel’s fight for busing to end school segregation in Denver — and its aftermath. It’s told outdoors in a parking lot with a real school bus used as an important element. Buy tickets, $10 to $40, here.

Alice in Wonderland
Through September 30, online
Phamaly's big fundraiser has been postponed, but its production of Alice in Wonderland — featuring Wheelchair Sports Camp — continues through the month. When Alice falls down a rabbit hole, she stumbles upon Wonderland, a bizarre world filled with philosophical caterpillars, chaotic croquet games and disorienting cats; this adaptation of Lewis Carroll’s classic children’s book is indeed weird and wonderful. Watch it online on demand; get details here.

I Do! I Do!
Through October 10
Arvada Center Main Stage, 6901 Wadsworth Boulevard
The Arvada Center’s Main Stage welcomes back live audiences with I Do! I Do!, a comfortable classic dating to the ’60s. Looking back over the ups and downs of a couple’s fifty-year marriage, the two-person show pops with songs by Tom Jones and Harvey Schmidt, first sung on Broadway by Mary Martin and Robert Preston. Yes, it’s that old, but you’re certain to leave with a smile on your face. Performances are Tuesdays through Saturdays at 7:30 p.m., with matinees on Saturday, Sunday and Wednesday; get information and tickets, starting at $53, here.

Hundred Days
Through October 10
Aurora Fox, 9900 East Colfax Avenue, Aurora
Hundred Days, which is receiving its regional premiere at the Aurora Fox, is a vivid musical memoir by real-life couple Shaun and Abigail Bergson about how the two met and fell in love at first sight. But though this isn’t one of those mournful terminal-illness narratives, the shadows gather when Sean learns that his time on earth, and with Abigail, may be limited to the hundred days of the title. The story of love and death’s inevitability is told with a folk-punk score that mixes touching ballads and raucous, pounding sing-outs. Tickets, $20 to $40, are available at the Aurora Fox Arts Center website.

Know of a great event in Denver? We'll be updating this list through the weekend; send information to [email protected]
KEEP WESTWORD FREE... Since we started Westword, it has been defined as the free, independent voice of Denver, and we'd like to keep it that way. With local media under siege, it's more important than ever for us to rally support behind funding our local journalism. You can help by participating in our "I Support" program, allowing us to keep offering readers access to our incisive coverage of local news, food and culture with no paywalls.
Make a one-time donation today for as little as $1.