Ten Things to Do in and Around Denver This Weekend, October 15-19 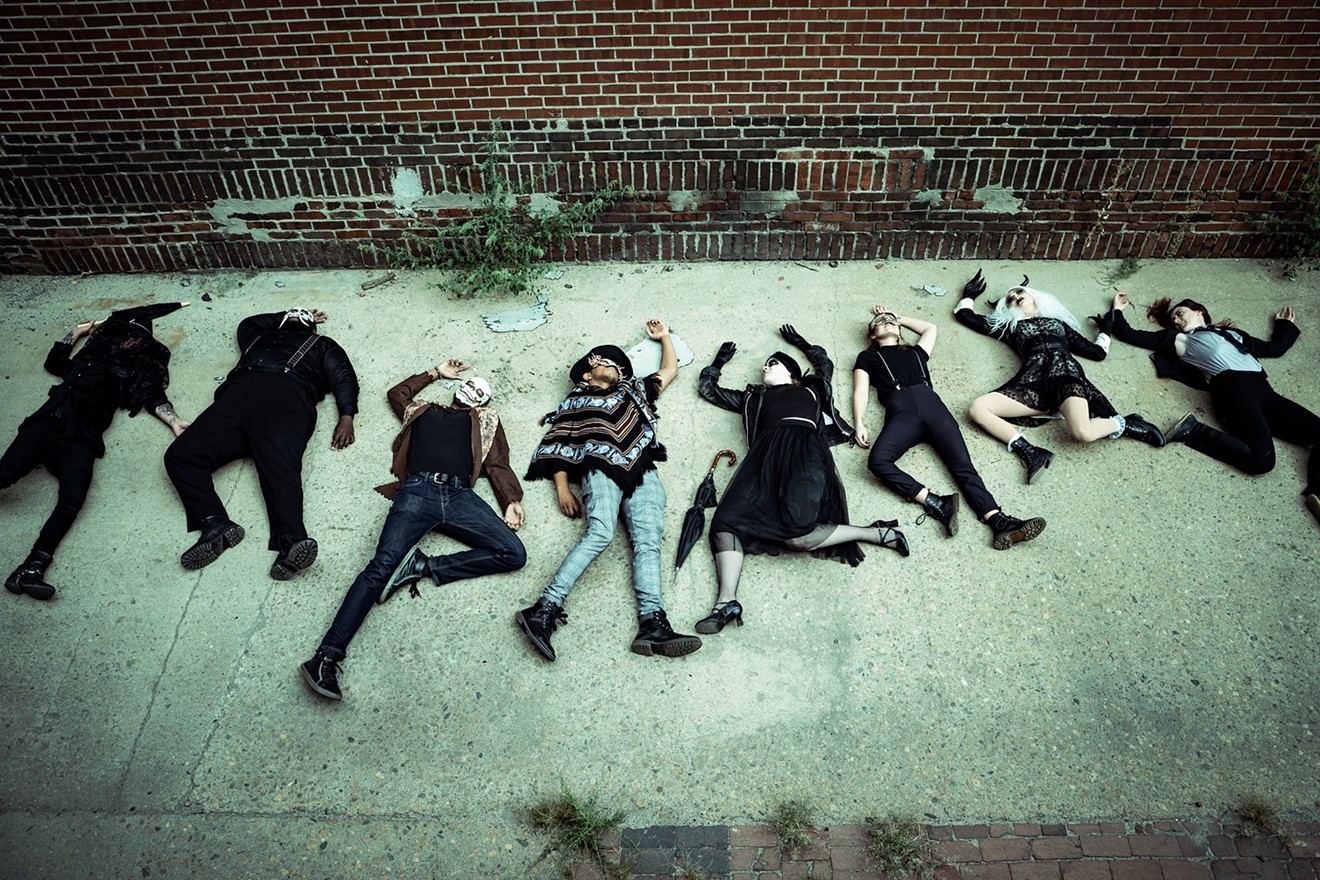 Rainbow Militia comes back to life in Death's Unraveling. Martha Wirth Photography
As the weather gets chillier, you may be tempted to stick close to home — in which case you'll find plenty of opportunities to enjoy good entertainment and do good at the same time through virtual events. But if you're itching to head out on the town, you'll find fun ranging from a whale of a book sale to a new running race to a fall market to the next awesome effort by Rainbow Militia.

Keep reading for the ten best events around town this weekend:

Whale of a Used Book Sale
Through Sunday, October 18
Jefferson County Fairgrounds, 15200 West Sixth Avenue, Golden
Colorado's biggest used book and media sale has returned, with some special precautions in these days of COVID-19. But the array of items will be as awesome as ever. The sale is open to the public from 9 a.m. to 5 p.m. Saturday, October 17; on Sunday, October 18, the hours are 10 a.m. to 4 p.m. for what's billed as "Bag of Books for $8 Day." Timed tickets are $5; only fifty people will be allowed into the hall at a time. As always, it's a benefit for the Jefferson County Public Library; find out more here.

Rainbow Militia comes back to life in Death's Unraveling.
Martha Wirth Photography
Rainbow Militia, Death’s Unraveling
Through November 1
Circus-based performance group Rainbow Militia did a quick switch after this summer’s Gnome Away From Home to produce Death’s Unraveling, a second COVID-conscious immersive show with interactive vignettes enacted behind plastic barriers by a fantastic cast. Friends from the Black Actors Guild join them in telling a story about what happens when Death becomes enamored with life, as audience members move from room to room in the Art House at 4345 Tennyson Street. Performances are Thursdays through Sundays (no shows October 30-31) by timed-entry tickets between 6:30 and 10 p.m.; tickets start at $30 and can be bought for pods of up to six people. Learn more and make reservations here.

5x5K for Good
Through Saturday, October 17, 7 p.m.
There will be five start lines across metro Denver for the first 5x5K for Good running event, hosted by Event 360, with 100 percent of the proceeds benefiting four local nonprofits: National Alliance on Mental Illness - Colorado, Shatterproof, Susan G. Komen Colorado and ZERO - The End of Prostate Cancer. Participants will have 24 hours to complete five 5K courses across metro Denver. “While we may not be able to gather in large groups at a traditional 5K running event, this contactless, app-guided event design — with five 5K courses that can be completed during a 24-hour period in any order — allows our participants to safely experience the thrill of a live event," says Tim Brockman, president of Event 360. “We’re proud to support our community of participants taking on the same challenge on the same day — something unique in the landscape of 2020 — while also doing good and supporting our local charity partners.” Find out more here.

Freak Power Day in Aspen
Saturday, October 17, starting at noon
Pitkin County Courthouse, 506 Main Street, Aspen
Don't leave Aspen yet! In honor of the fifty-year anniversary of Hunter S. Thompson's 1970 run for sheriff of Pitkin County, Aspen will celebrate Freak Power Day on October 1...which happens to precede the October 23 release of the film FREAK POWER: The Ballot or the Bomb, a documentary on that campaign. Aspen will be renamed Fat City for the day by Mayor Torre in a ceremony at the courthouse that will include appearances by producer Mimi Polk Gitlin and Bob Braudis, co-producer of the film and the former sheriff of Pitkin County for 24 years. There will also be a voter registration drive, and a Freak Power bike posse. And at 6:30 p.m., Freak Power: The Ballot or the Bomb will be screened on the rooftop of the Aspen Art Museum for free; pre-registration is required here.

An Evening of HOPE
Saturday, October 17, 6 p.m.
The second annual Evening of HOPE, benefiting Robbie's Hope Foundation, will be a ninety-minute virtual event this year, with entertainment by Flobots, author/podcaster Mike Rowe, and comedian Pete Lee, as well as educational information about teen depression, anxiety and suicide. Robbie’s Hope Foundation was formed in 2018 after fifteen-year-old Robbie Eckert took his own life; the group's goal is to cut teen suicide rates in half by the year 2028. Tickets are $100 — but free for teens; find out more here.

Book Launch: The Perfect Stranger, by Gregory SETH Harris
Saturday, October 17, 7 p.m.
Gregory SETH Harris, a longtime regular in Denver’s poetry and spoken-word community, has finally realized his dream of finishing and publishing a novel, The Perfect Stranger, a wild satire with a parade of characters. Harris will be joined by friends, including host Ted Vaca, his musical group Art Compost & the Word Mechanics, and fellow poets Roseanna Frechette and Riley Anne, for a reading in the ballroom at the Mercury Cafe, 2199 California Street, Harris’s home away from home. Seating will be socially distanced and the event is free; get details on Facebook.

Pumpkin & Spice Pop-Up Market
Sunday, October 18, 10 to 3 p.m.
Belleview Station, 6785 East Chenango
The Denver BAZAAR is hosting a mini market to celebrate the flavors of fall, with 25 local artisanal food vendors. While you browse, you can enjoy live music and fall cocktails ($5 tokens available) courtesyof TheBigWonderful. Dogs are welcome and entry is free (and timed), but an RSVP is required here.

Rooftop Pilates With Amy Kuo
Sunday, October 18, 11 a.m.
Joy Jill, 1229 South Broadway
Amy Kuo is collaborating with Joy Hill, a locally-owned and -operated wood-fired pizzeria, for a rooftop mat Pilates class followed by chance to mingle, eat and drink with friends and family. The mat class is $20 and includes a $10 voucher to use that day for food and/or drink. Enroll here.

Pumpkin Carving + Cocktails
Monday, October 19, 6 to 8 p.m.
Pumpkin carving isn’t just for kids. Adults are invited to get in the Halloween spirit with a proper carving kit and a spooky seasonal cocktail at Improper City, 3201 Walnut Street. A fee of $40 per person includes a pumpkin, the kit and one drink, not to mention a fun evening of acting like a child and getting creative with others of your kind. Tables for up to four can be reserved in advance; make reservations at Eventbrite.

Know of a great event around town? We'll be updating this list; send information to [email protected]
KEEP WESTWORD FREE... Since we started Westword, it has been defined as the free, independent voice of Denver, and we'd like to keep it that way. With local media under siege, it's more important than ever for us to rally support behind funding our local journalism. You can help by participating in our "I Support" program, allowing us to keep offering readers access to our incisive coverage of local news, food and culture with no paywalls.
Make a one-time donation today for as little as $1.