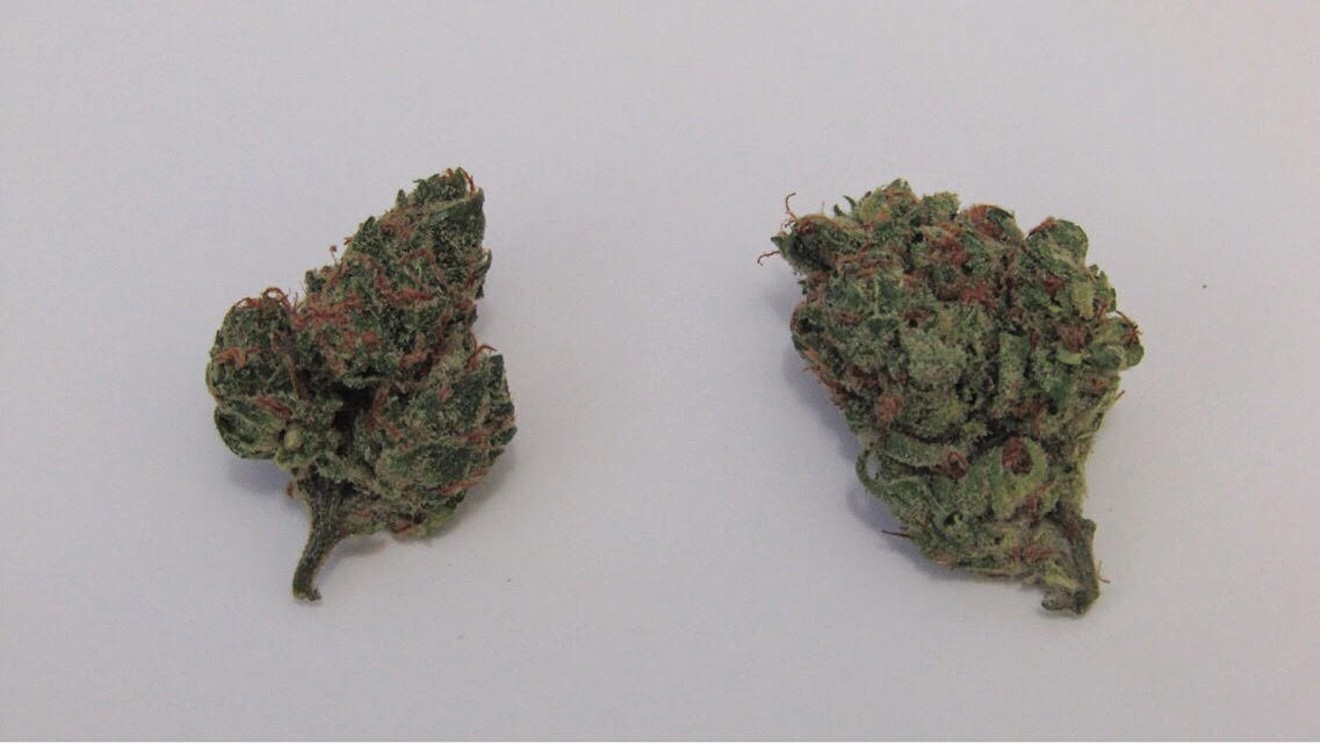 Forget the electric chair. Give me Death by Lemons. Herbert Fuego
It's been a while since the name of a strain intimidated me. Herijuana was probably the last one that made me nervous, and that was at least five years ago. But a recent trip to The Health Center Uptown had me shaking in my shoes as I walked to the cash register. I was about to smoke some Death...by Lemons.

Conjuring the voice of Katt Williams screaming “This shit right here?!” as he rants about the ridiculous names of pot strains, Death by Lemons might sound like an absurd attempt by the breeder to get some attention, and some tokers think it is. The budtender at THC scoffed at me for even considering the strain, saying that all of the limonene terpenes gave him a headache. “It's your money,” he added.

While I didn't appreciate the budtender's attitude, I could see his point that Death by Lemons can be too much, even for big fans of citrus strains. If Tangie is the extreme end of the orange spectrum, then Death by Lemons is its obvious lemon equal. My eyes opened wide, my head jerked backward and my nose felt violated the moment I opened a jar — I'm pretty sure I had sex hair afterward — so I wasn’t surprised by the strain’s lemon-cleaner taste and caffeine high.

The intense characteristics of Death by Lemons make it a great sixth man, ready to come in off the bench and provide a spark during the doldrums of your day's third quarter — but don't rely on it for everything. The flavor and effects are too specific to enjoy daily; still, those same factors make it very handy when you need them.

I've seen Death by Lemons popping up in Denver dispensaries under wholesale grower NUHI distribution; The Health Center currently carries it at both of its locations. NUHI keeps the genetics under lock and key, but rumors suggest that the strain is a combination of Death Star and Lemon Skunk, Lemon Haze or Lemon G.

Because Death Star's Sour Diesel genetics paired with any of those three would create the smell and flavor of a Warhead sour candy, as well as Death by Lemon’s sativa effects, I believe what the street's saying on this one.

Looks: Death by Lemons has a vibrant, bright-green color, with rich, rusty-orange pistils and a thin but extensive coat of trichomes. Bright colors and spindly calyxes scream sativa, but its bud shape can be more round than expected.

Smell: Nostrils, beware. Death by Lemons doesn't have the strongest smell, but it’s very aggressive and extremely one-sided. All of that lemon leaves your nostrils clean and shiny after a whiff, but that can get old after an eighth.

Flavor: Sharp, tart and to the point. The intense lemon flavor could be a palate-wrecker for some, but it's an invigorating shot of sweet and sour for anyone looking to pucker up. Although not as strong as the smell, the taste isn’t as complex, either, so the lemon dominates.

Effects: As the smell, looks and flavors imply, Death by Lemons is a clear sativa, with initial uplifting effects that push the boundary of disorientation. But take this one slowly, because typical sativa side effects — lack of focus, anxiety, dry mouth — tend to kick in after more than a couple of bowls. If dosed responsibly, though, it can take away stress while providing a powerful shot of energy, making it great for exercise.

Home grower's take: “I've never seen this for sale on the commercial side, but it can be gotten elsewhere. From what I've heard, it’s some combination of Lemon Skunk or Lemon G, and Death Star. It makes sense, name-wise, and so does that fucking crazy sour smell that it carries. Leaves get pretty big from the start, so be prepared to top. Trichome coverage is excellent, but be ready for your grow to smell like lemon juice.”