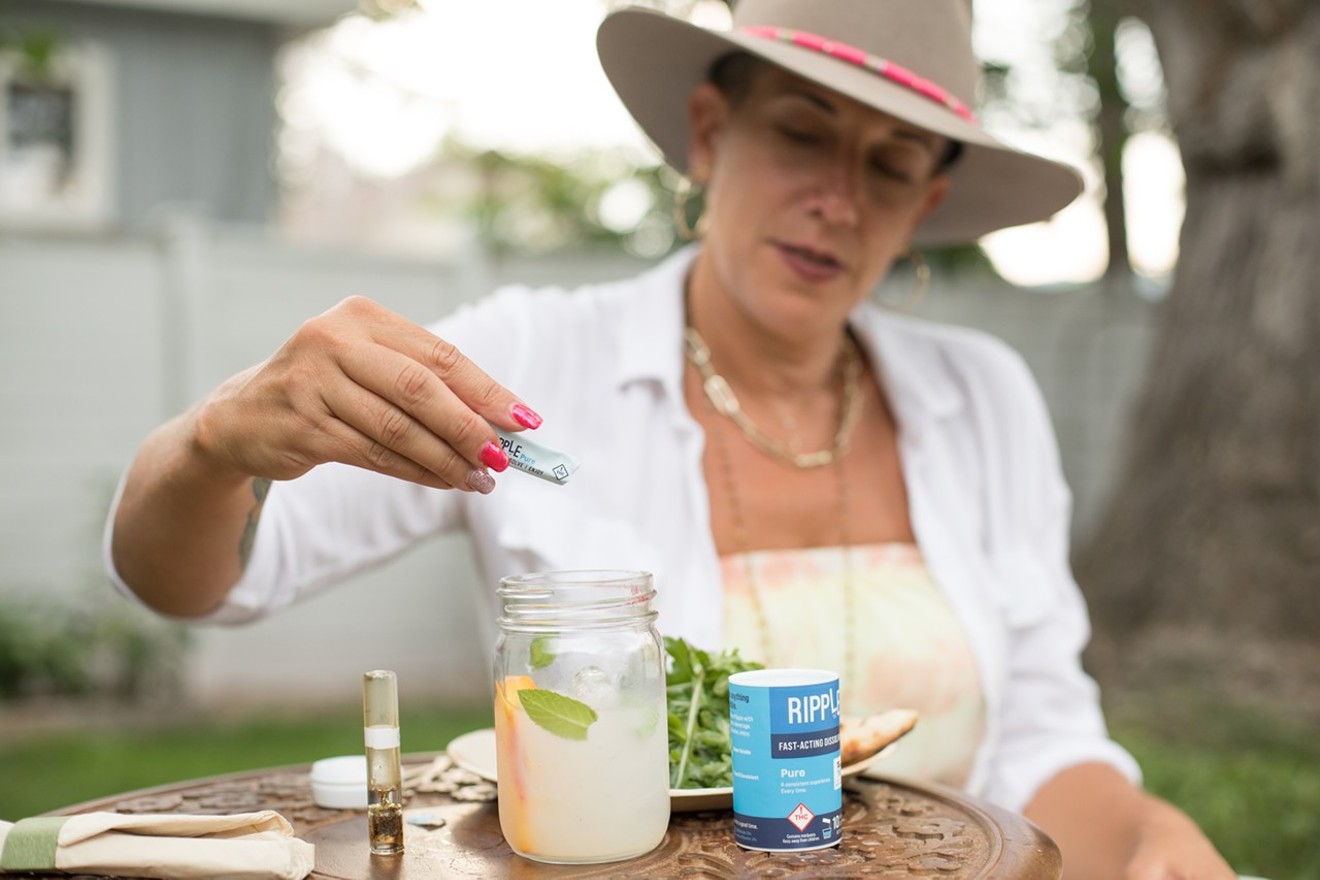 Ripple, a powder form of THC or CBD, can make any beverage a cannabis cocktail. Jacqueline Collins
January is the month of self-improvement, and that state of mind is no longer confined to New Year's resolutions. Dry January is all the rage now, and you can participate without being sober for a month.

Sober January's roots date back to a public-health campaign in 1940s Finland, but the term "Dry January" starting gaining steam in the 2010s. You know: As with "Sober October," a good slogan is all people need to decrease their alcohol consumption and engage in a healthier life.

If you got stuck signing up for Dry January, we're here with cheat codes. Marijuana-infused beverages will keep the buzz coming while you technically stay dry for any stretch deemed alcohol-free by the hip and trendy. Beer, seltzers, coffee and drink starters with CBD or THC are all available at dispensaries, and it won't cost much more than a liquor-store run.

Beer
You don't have to skip beer in Dry January, and we're not talking about O'Douls. Plenty of dispensaries sell cannabis-infused, non-alcoholic beers and hop-flavored seltzers, most of which come in varieties with THC, CBD or both. Ceria Brewing, a cannabis brewery founded by Blue Moon Brewing creator Keith Villa, makes an IPA and Belgian-style wheat beer with varying amounts of THC and CBD, and also sells a straight-edge version with no cannabinoids or alcohol in liquor stores. Lagunitas Brewing Company has its own spin on THC suds with Hi Fi Hops, a line of hops-flavored sparkling water with THC and CBD. Both products tend to hit faster than traditional edibles, and by the time you're finishing your second, you might start feeling the buzz.

Phyx's flavorless option provides a black canvas for whatever bubbly drink comes to mind.
Courtesy of Spherex
Seltzer
Don't worry, seltzer heads. The cannabis industry has you covered, too. Oh Hi, a Durango-based cannabis seltzery, has quickly become a popular option at dispensaries, offering flavored seltzers with 10 milligrams of THC, or 5 milligrams of both CBD and THC. Oh Hi's grapefruit, ginger basil lemonade, lemon-lime and pomegranate flavors are all good on their own, but the company has a list of drink recipes you can make with the seltzer, too. (Oh Hi also sells energy drinks and soft drinks with 100 milligrams of THC for higher tolerances.) Phyx is another THC and CBD seltzer option to check out; coming from a branch of Spherex, the sparkling water is available in dragonfruit, grapefruit and lime flavors, as well as a natural option, with zero sugar, calories and carbohydrates, according to Phyx. Maybe it's time to pull out the orange juice.

Soda
Want something sweeter than a seltzer or beer? There's no shortage of cannabis-infused sodas to choose from at dispensaries, with dosages ranging anywhere from 2.5 to 100 milligrams of THC. Keef Cola continues to dominate that space, making classic cola, orange soda and root beer, as well as more candy-like flavors such as blue raspberry. Dixie Elixirs, Legal Beverages and Nectarbee make cannabis sodas, too, while brands like Canna Punch, Canyon Cultivation and Sons of Sativa sell non-carbonated THC soft drinks.

Courtesy of Bosky Labs
Mocktails
Infused drink powder, syrups, salt and sugar all provide opportunities to make a cannabis mocktail at home. Mix a THC syrup with seltzer water, put infused salt on the rim of a virgin cocktail, or add THC mixing powder like Ebb or Ripple to your beverage of choice. The possibilities are endless, and don't have to stop with your boozeless journey in January.

Coffee
You really shouldn't need a replacement for morning booze, but coffee isn't necessarily confined to the morning hours, anyway. Making your own cannabis-infused coffee is easier than it sounds, but there are better-tasting options on the edibles shelf at dispensaries. Bosky makes a caramel-flavored rosin syrup that mixes well with iced coffee and Starbucks Double Shot, while Canyon Cultivation's THC-infused nitro coffees are a creamy jolt of energy that taste good in the back seat of a friend's car as you head to the slopes.
KEEP WESTWORD FREE... Since we started Westword, it has been defined as the free, independent voice of Denver, and we'd like to keep it that way. With local media under siege, it's more important than ever for us to rally support behind funding our local journalism. You can help by participating in our "I Support" program, allowing us to keep offering readers access to our incisive coverage of local news, food and culture with no paywalls.
Make a one-time donation today for as little as $1.