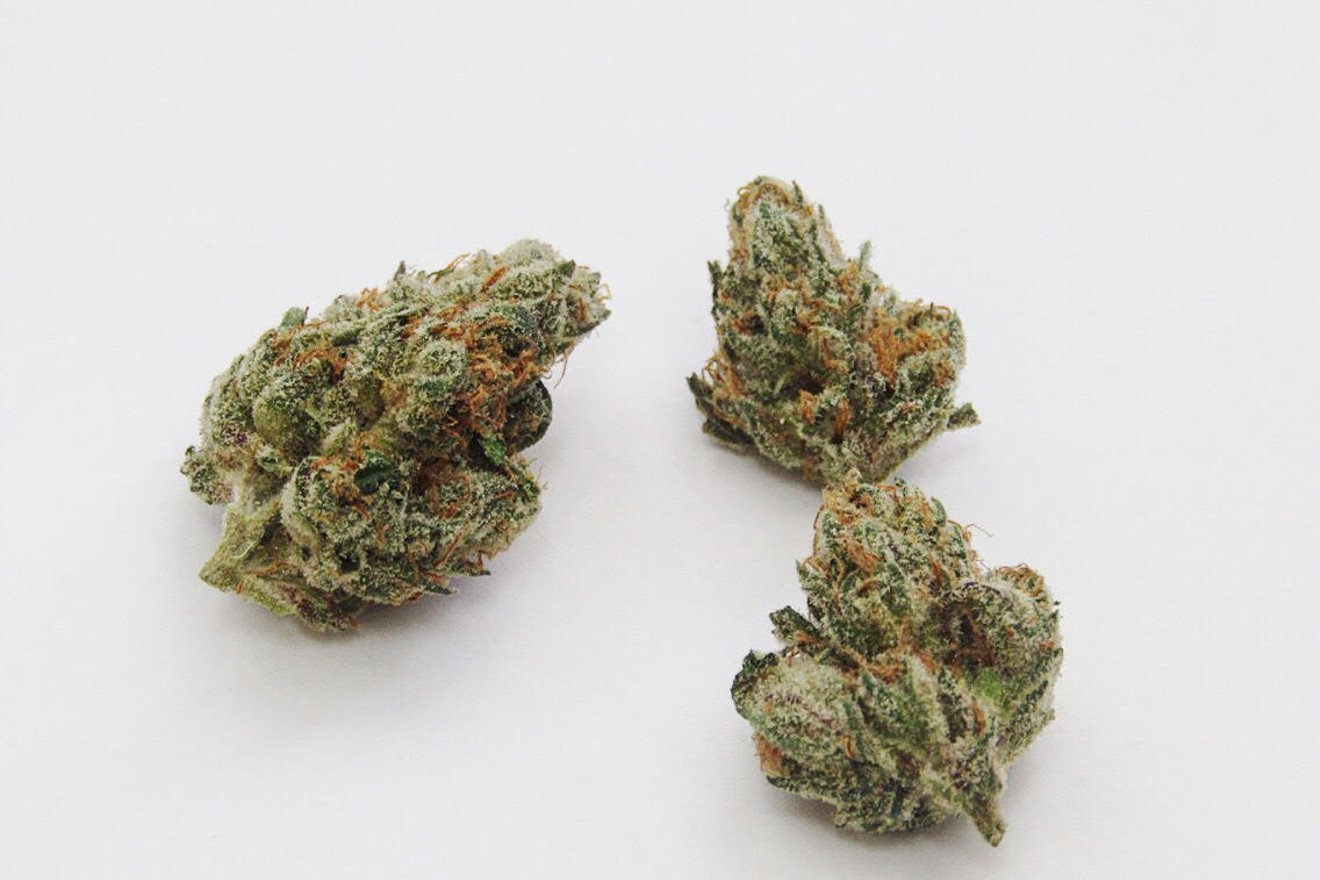 Go Floog yourself. Herbert Fuego
Most of the strains I choose to review are based on some mix of popularity, novelty and timeliness, but sometimes personal motivation trumps all. Flo OG — or, as anyone who hates syllables calls it, “Floog” — was a case of love at first whiff for me, and any toker who appreciates the lime-green glow and pungent scents of classic chronic would also fall for it.

A child of Flo and Rare Dankness #1, Flo OG is sure to please fans of popular hybrids such as its parent, Flo, or most Cookies strains. The indica-leaning strain certainly relaxes and soothes the body, while effects on the mind are both vigorous and uplifting, without annoying sidekicks like anxiety or inattention. The strain instantly impressed when I experienced its caressing high and rubbery, sweet stank for the first time last year, and it's been on my most-wanted list ever since.

Flo OG's breeder, Rare Dankness, hails from Denver but has made the strain available to the rest of Colorado and beyond. Still, the Floog will always be ours — and although it’s not as popular as such Rare Dankness creations as Ghost Train Haze or Lee Roy, I'd proudly pit it against any strain from California, Oregon or the rest of the country.

Some tokers say Flo's famous 50/50 high is overrated, but don't count me among them. The even-keeled buzz is perfect for relaxing sessions after work, but it can also get the job done during a quick wake-and-bake before the day starts. While tempting, Flo OG isn't as suited for morning sessions, but it pairs well with a bold cup of coffee and serves as a delicious filler for your afternoon joint. Each puff imparts waves of smooth euphoria and creativity, but that can quickly top out and bring users to a sleepy lull.

You can find Flo OG at Rare Dankness's dispensary, House of Dankness, for as low as $15 an eighth or $80 an ounce during weekly flash deals. No dispensary in town is beating that price for the Floog, but Groundswell, RiNo Supply Co., RiverRock dispensaries and Drift in Boulder also carry it at competitive prices.

Looks: Flo OG comes packaged in nuclear lime-green buds that will glow out of any bottle, jar or bag lucky enough to contain them. Although labeled an indica, the strain has buds that are more wispy, tall and open instead of dense, chunky and round, such as those of Rare Dankness #1.

Smell: Intense, pungent smells of rubber, Skunk and citrus are paired with a sweet, tangy kick to the nose, both of which are mellowed out by calming, zesty notes of wood. Warning to closet stoners: Any room containing an open jar of Flo OG will instantly smell like Flo OG.

Flavor: My favorite characteristic, Flo OG's terpene-heavy flavor, breaks through brown bong water or a tar-filled roach and still leaves a nice aftertaste on the tongue. Rubbery, skunky clouds of smoke constrict the tastebuds, followed by acidic, sweet notes of citrus and a rind-y, woody flavor at the end.

Effects: Flo OG will remain on the indica side of the shelf at pot shops, and its calming body high backs that up — but I think it belongs more in the middle. The high is relaxing but not melting unless completely overdone, and the effects stimulate the mind more than muck it up. The strain's giggly effects are underrated, too, pushing movies, music and anything visceral up a notch.

Home grower's take: “Easy to find in seeds, but I don't think the same can be said for clones. You would probably have to either grow it from seed every time or start a mother plant and then clone from there. Sucks, because I'm too lazy for that. I really like the taste, and anyone who smokes a lot of weed probably would, too, because of those earthy and Diesel-like fumes.”


Is there a strain you'd like to see profiled? Email [email protected]
KEEP WESTWORD FREE... Since we started Westword, it has been defined as the free, independent voice of Denver, and we'd like to keep it that way. With local media under siege, it's more important than ever for us to rally support behind funding our local journalism. You can help by participating in our "I Support" program, allowing us to keep offering readers access to our incisive coverage of local news, food and culture with no paywalls.
Make a one-time donation today for as little as $1.