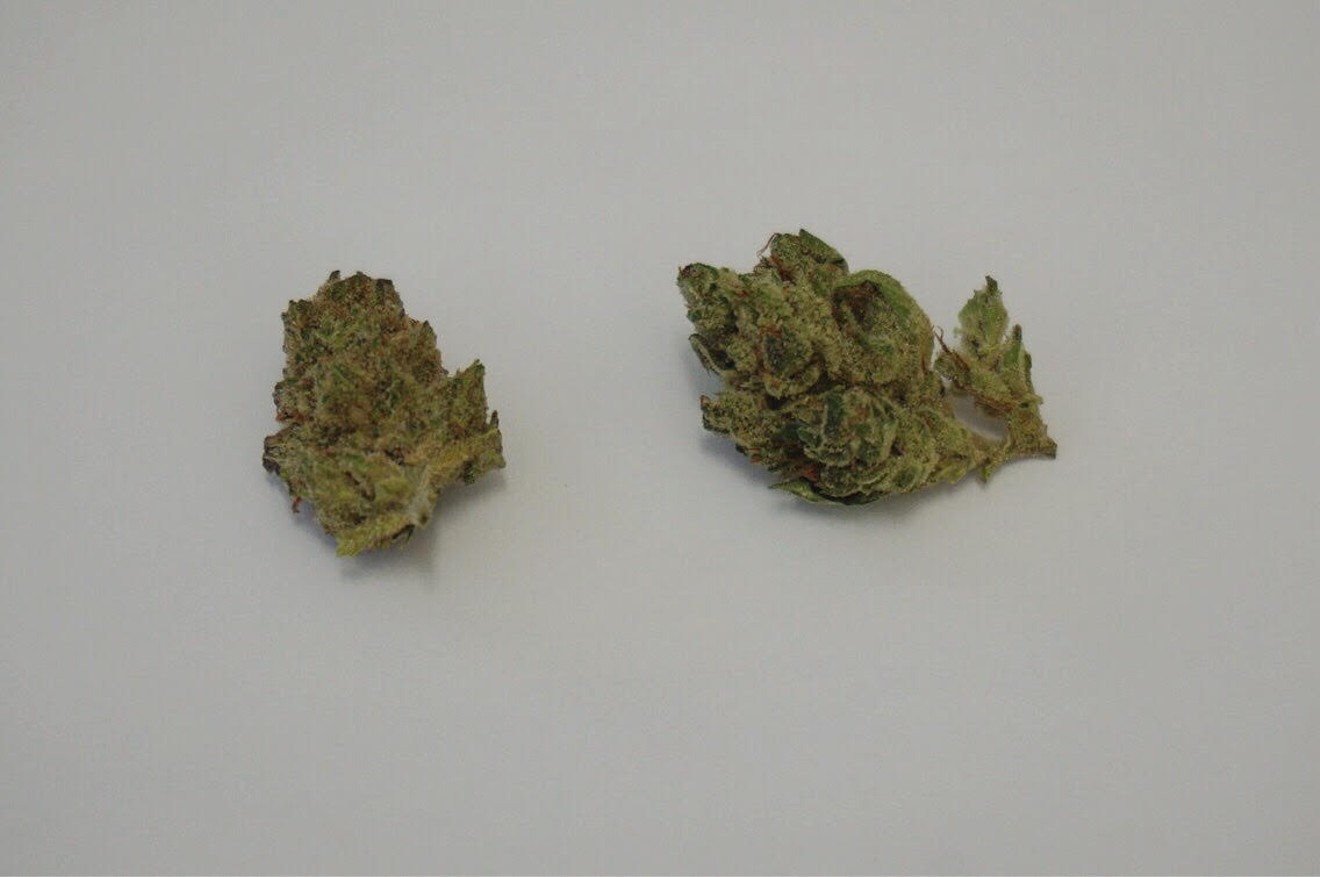 Let Mother's Milk send you to bed on a high note. Herbert Fuego
While flavors of hard candy, vanilla, sweet cream and milk chocolate aren't as prevalent in cannabis as the taste of soil or citrus, I prefer the sweeter strains, especially when they’re grown right. Recent experiences with Cookies and Cream, Frankenberry and Hazelnut Cream had me hungry for something sugary during my holiday break, and a trip to Lightshade presented me with a sweet opportunity in Mother's Milk.

A mix of Appalachia and Nepali OG (or Nepal Kush, depending on whom you ask), Mother's Milk is classified as a sativa-leaning hybrid, but many of its users don't agree with the classification. The strain's high is quite calming physically and mentally, making it a strong example for those who argue that the indica/sativa designation is meaningless when predicting effects. Appalachia, a hybrid of Tres Dawg and Green Crack, has an aloof, spacey high, while Nepali OG carries landrace indica genetics from the Himalayas. The combination creates a pretty coat of trichomes and a surprising trifecta of smell, flavor and effect.

Although Mother’s Milk was not as sweet and creamy as I’d hoped, the smell shoots straight up the bridge of the nose, filling it with sweet and funky scents of vanilla, yeast, pine and soil. The tart, doughy odor might remind some of sour milk more than a latte, but fans of dank and earthy aromas will appreciate the punch. The strain’s flavor showcases more OG Kush qualities than its smell does, with musty notes of soil accompanying grainy, milky flavors.

Mother's Milk is currently a chain strain, available at Lightshade and Native Roots locations around Denver. Both cuts have a chunky, oddly shaped bud structure and bright glaze of amber trichomes, though Native Roots says its genetics are inspired by Haze and Jack Herer. I like the Lightshade cut in terms of it matching the Mother's Milk reputation, with calming vanilla flavors and pacifying effects.

Looks: Chunky, wide calyxes create oblong buds with a dense structure. Color is a mild wintergreen made brighter by a thin but extensive coat of amber trichomes.

Smell: A strange mix of pine, dough, vanilla and wet soil, Mother's Milk doesn't carry the lulling aroma of cream you'd expect from its name, but the smell is enjoyable nonetheless.

Effects: Like a warm glass of milk before bed, Mother's Milk calms the body and mind quickly, melting away the foundations of stress, minor pain, appetite issues and even nausea. Just don't let its sativa or hybrid designation fool you: This mother will knock you out, so abstain from daytime use unless you're looking for a nap.

Home grower's take: “Always been tough to figure out in the grow. The smell can change — some cuts have this thick smell of powdered milk, and others are sweet and kind of smell like vanilla candy that a skunk just pissed on — and so can the effects. But there's always an OG tinge to it in the flavor, usually on the end. The looks, flowering time, height and so on are pretty much always the same. Takes around sixty or seventy days to flower, and its yields aren't bad. If you want a heavier yield than a rare OG phenotype with some of that flavor, I'd try this one out. Just be flexible with the terps.”

Commercial grower's take: “Lightshade has been pushing this pretty heavily for at least a month now, so it must be yielding well for them. I could see why this strain would do well during the winter months, especially during the holidays. It's very relaxing, and its milky and bread-like scents kind of match that warm feeling that goes with staying inside. I've heard Bodhi and Sensi seed companies claiming it, but I'm not sure which cut made its way to Denver. I think Lightshade has Bodhi, and Native Roots has the Sensi one.”


Is there a strain you'd like to see profiled? E-mail [email protected]