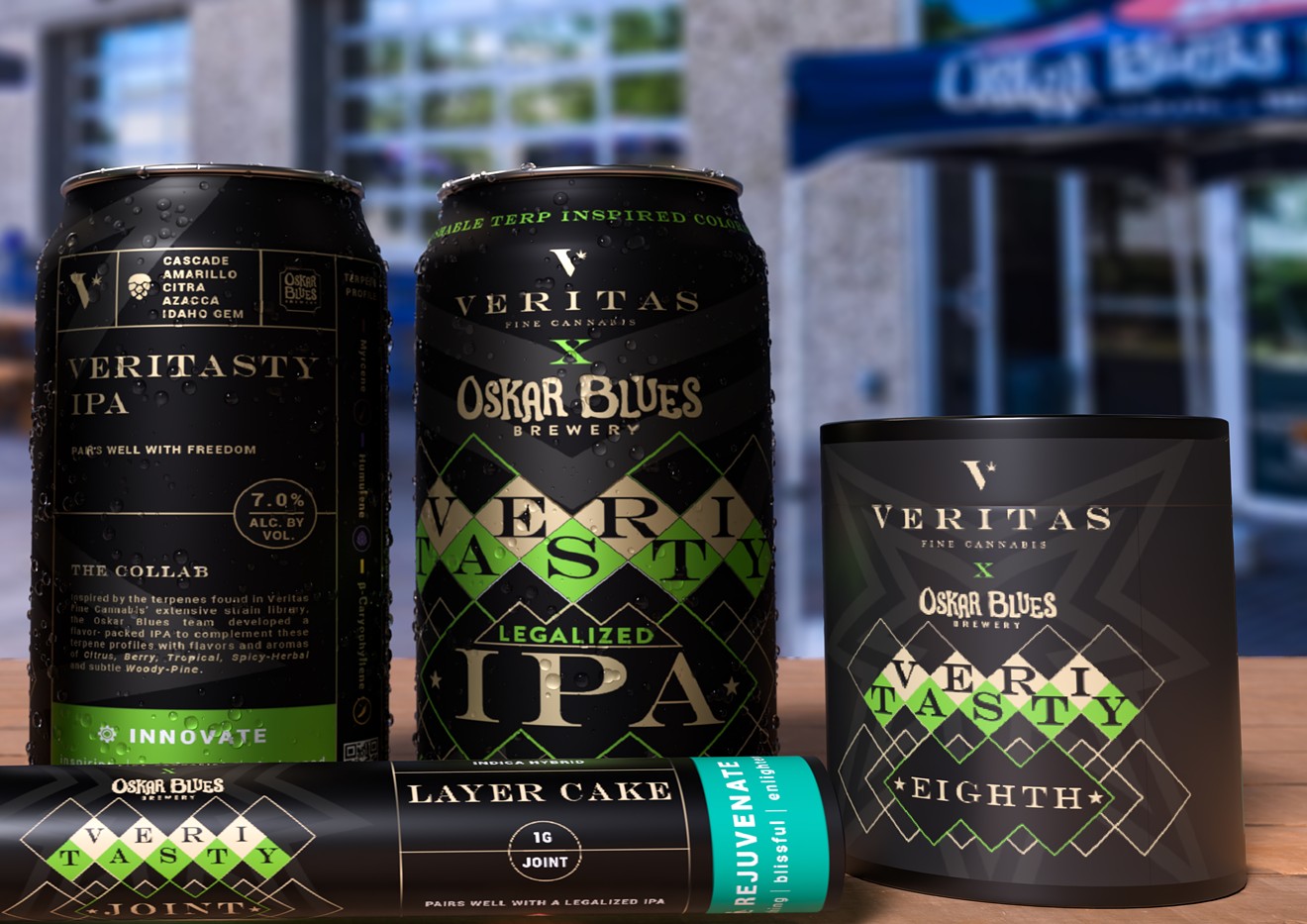 Both Oskar Blues and Veritas have released products celebrating the collaboration. Courtesy of Oskar Blues Brewing
A brewery and a marijuana grower just released a beer honoring Colorado's decision to legalize the plant.

When Oskar Blues Brewing founder Dale Katechis joined Colorado marijuana cultivator Veritas Fine Cannabis as a partner last year, the two sides hinted at crossover branding. However, Oskar Blues sold Canarcy, the parent company of Oskar Blues and five other craft breweries, to Monster Energy earlier this year for $300 million, and the next cannabis-related venture from Katechis was a THC seltzer water with a different company.

Good things come to those who wait, though, and Oskar Blues and Veritas held off for a great day to debut their next project. On April 20, or 4/20, the two companies celebrated the release of Veritasty Legalized IPA, a new East Coast-style hazy IPA.

The beer isn't infused with marijuana or cannabinoids, but it is heavy on the puns — something of a tradition at Oskar Blues, which has printed phrases like "Sip, Sip, Give" and "Blue Dream" on cans before. And Veritas has its own inspired products, too, with Veritasty flower and pre-rolled joints now sold in Colorado dispensaries.

The Veritasty marijuana strain Layer Cake was chosen for the pairing because of a terpene lineup similar to that of the new beer. A plant compound responsible for aromas and flavors, terpenes are relatively abundant in the cannabis and hop plants, which are related to each other. After strolling through the Veritas garden and comparing strains to hops used by Oskar Blues, head brewer Juice Drapeau settled on a combination centered on the terpenes myrcene, humulene and caryophyllene.

"We checked out a variety of their products and found some common terpene combinations that were directly related to some of the hops we have in our portfolio," Drapeau explains. "It's very pillowy, soft and fluffy in its mouthfeel. It has a soft balance of malt while enhancing the hops and essential oils, too."

Drinkers should expect a citrus, stone fruit, tropical and woody flavor profile from the recipe, according to Drapeau.

Although terpenes are an integral part of a beer's flavor, Drapeau says that he'd never focused on percentages of terpenes in hops when he brewed, instead relying on his nose and tastebuds. This time, however, he had to get specific in order for the beer's terpene profile to match the Layer Cake cannabis strain.

"I've been in the beer industry for seventeen years, and this was a different approach for me. I usually take some hops that are pretty popular, and I'm familiar with their overall flavor and aroma description. This time I only focused on terpene makeup," Drapeau says.

The new IPAs will be sold in six-packs at liquor stores and other retailers that carry Oskar Blues. Katechis, who originally set up the partnership between the companies, is no longer heading the brewery, but he's still leading the Oskar Blues restaurant operation and remains a partner at Veritas. The two teams hope to collaborate again if the new ownership at Monster Energy is interested.

"We're still very open to it on our side," says Veritas marketing director Jordan Plunkett. "I know with these ownership changes, things might change in the future, so we want to make sure we do it right this time."
KEEP WESTWORD FREE... Since we started Westword, it has been defined as the free, independent voice of Denver, and we'd like to keep it that way. With local media under siege, it's more important than ever for us to rally support behind funding our local journalism. You can help by participating in our "I Support" program, allowing us to keep offering readers access to our incisive coverage of local news, food and culture with no paywalls.
Make a one-time donation today for as little as $1.