Rosin edibles are on the rise in Colorado, but there are still just a handful of brands to choose from. Courtesy of Dialed In
Rosin, a form of marijuana extract made with pressure and temperature fluctuation, is quickly becoming a preferred method of consumption for dabbers and vapers, but the edibles market is shifting toward the solventless concentrate, too.

Unlike distillate, a refined form of THC commonly used by edibles manufacturers, rosin needs good starting material, because the extraction process is essentially all about squeezing the good stuff out of cannabis or bubble hash. Those higher expectations for ingredients lead to slightly higher prices for rosin than for distillate edibles, but the higher price also gets you a more natural mix of terpenes and cannabinoids, and a very effective high.

Rosin edibles are still in their early stages, but Colorado dispensaries have a handful of options to choose from. Here are six companies to check out:

Dialed In Gummies
Perhaps the most popular line of rosin edibles in Colorado, Dialed In Gummies launched in 2020 and quickly ascended after shoppers experienced the flavor profiles and fuller effects. Dialed In's sous-vide technique — a method that applies pressure to vacuum-sealed bags placed in hot water — allows the gummies to retain more terpenes, flavonoids and cannabinoids, according to the company. The process makes for fuller effects and flavor combinations that highlight cannabis flavors instead of hiding them, something most seasoned cannabis users appreciate. Each container of Dialed In Gummies includes names of the strains used in production, which are sourced from a long list of popular Colorado growers. 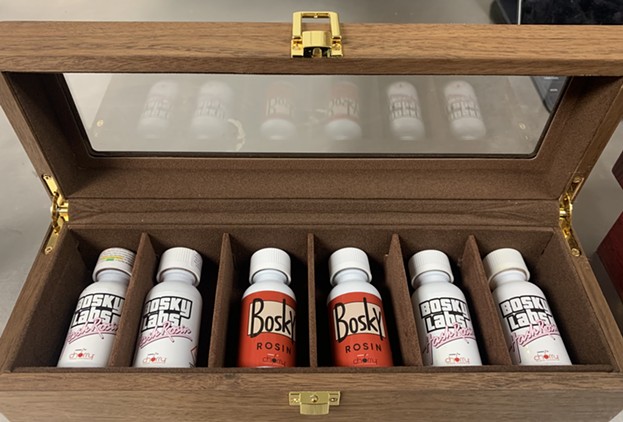 Bosky's rosin syrup currently comes in six flavors, but has more in the works.
Herbert Fuego
Bosky Labs
Looking for something you can sip instead of chew? Bosky Labs, a new rosin edibles brand that uses Cherry flower, has been a fast riser on dispensary shelves in 2021. The rosin-infused syrup has a hashy kick that terp lovers appreciate, with flavors like caramel, grape, mango, raspberry, rose and strawberry already available, and more in the works. The syrup is thick and concentrated, so we like to mix the fruity flavors with seltzer water and the caramel with a cold shot of espresso, but that's just the tip of the recipe iceberg.

Robhots
Robhots isn't new to making weed gummies, nor is the seven-year-old company new to rosin edibles. According to Rhobots, a line of short-lived rosin edibles debuted in 2016, but the company then switched to distillate permanently — until now. Rhobot's line of rosin gummies is less than two months old, so we haven't tried them yet, but the new flavors rotate with the rosin to complement the terpenes. Each batch of gummies is made with strain-specific rosin from talented extractors like AllGreens, Apothecary Extracts, Leiffa and Terpman & Rosin, according to Rhobots, which plans to work with more squeezers in the future.

Leiffa
This Lakewood-based dispensary and extractor has become synonymous with solventless extracts, and is now dipping into the solventless edibles game, too. Leiffa's rosin-infused chocolate bars are sold in 100-milligram doses on the recreational side at dispensaries around Denver. Our favorites are the dark chocolate and cherry, and white chocolate and strawberry crumble — both of which do a good job of masking rosin's strong, terpy flavor if you're not a fan.

If you have a medical card, check out Leiffa's medical-only menu, where you'll find higher-dosed rosin gummies and baked goodies through partnerships with such edibles makers as Green Hornet, Rhobots and Sweet Mary Jane's.

Äkta's rosin gummies currently come in seven different flavors.
Courtesy of Äkta
Äkta
Relatively new to the scene, Äkta makes rosin badder, vape cartridges and gummies infused with live rosin, sourcing flower from sister company and greenhouse cultivation Hava Gardens. The in-house production cuts out the cost of partnering with a growing partner, and that shows up at the cash register without a drop in quality. Äkta currently has seven flavors of live rosin gummies; our favorite is the papaya, which also happens to be the name of one helluva rosin-producing strain.

Cheeba Chews and Green Hornet
It was only a matter of time before bigger names caught wind of the rosin push, and Cheeba Chews may be the first to act on it in Colorado. The national brand's foray into rosin edibles started with a collaboration with Soiku Bano, one of the state's most popular new solventless extractors. Select strawberry-flavored Cheeba Chew taffies are infused with Oreoz live rosin, and the company's line of Green Hornet gummies features a mandarin orange flavor made with Gelato Cake live rosin. There will be new flavor and strain pairings each quarter going forward, according to Cheeba Chews, so don't wait around to grab a combination you like.
KEEP WESTWORD FREE... Since we started Westword, it has been defined as the free, independent voice of Denver, and we'd like to keep it that way. With local media under siege, it's more important than ever for us to rally support behind funding our local journalism. You can help by participating in our "I Support" program, allowing us to keep offering readers access to our incisive coverage of local news, food and culture with no paywalls.
Make a one-time donation today for as little as $1.