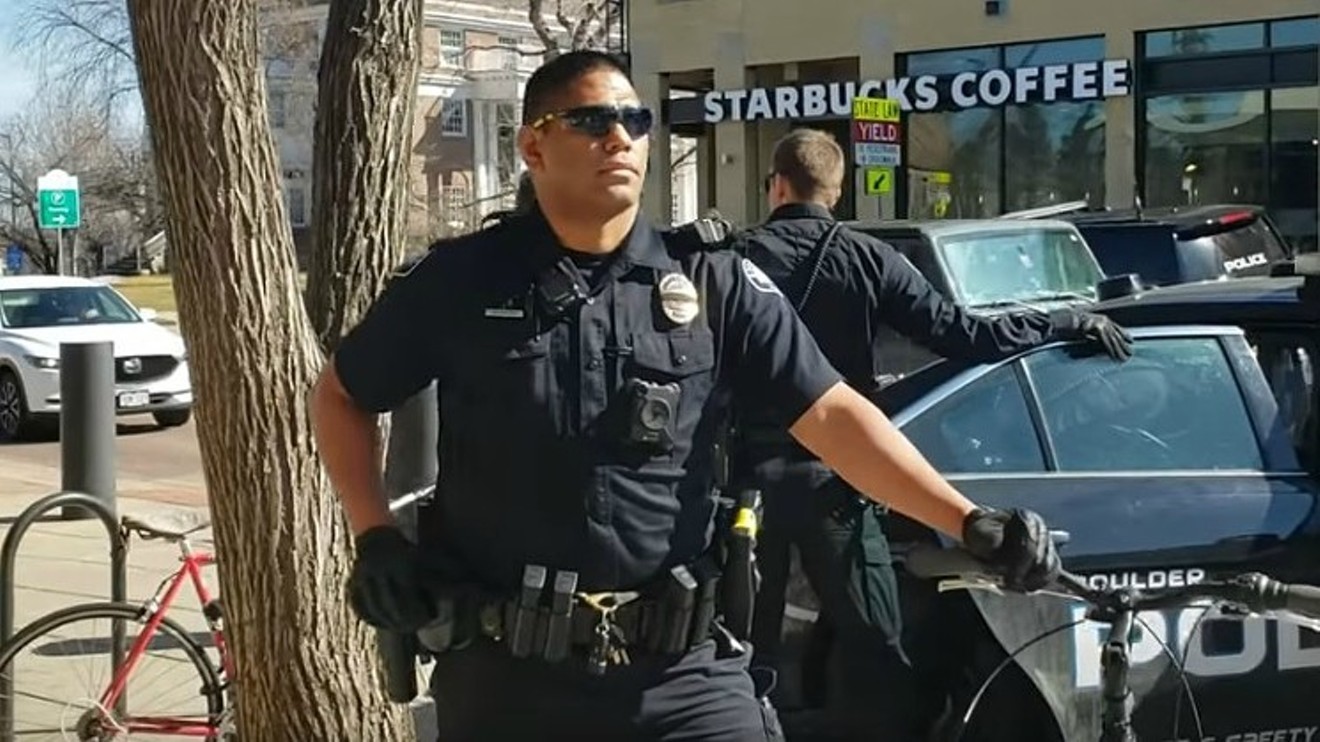 Officer Waylon Lolotai as seen in a March 2019 video shared by ZFG Videography, which is associated with a lawsuit against the Boulder Police Department over a separate incident that same year. ZFG Videography via YouTube
During an evening meeting on January 4, Boulder City Council approved the settlement of a lawsuit filed over a 2019 attack by ex-Boulder cop Wayne Lolotai against Sammie Lawrence, a young man who walks with the assistance of a cane.

Boulder agreed to pay Lawrence $95,000 to make the matter go away — a substantial sum, although far below the seven-figure amounts generated by some excessive-force cases. But while the city may have saved a few dollars and cents, the cost to the Boulder Police Department's reputation could prove to be significantly higher. As part of the pact, the BPD agreed to release use-of-force data about its officers — and if it's anything like the record racked up by Lolotai, it will be damning.

According to attorney Darren O'Connor, who represents Lawrence with Daniel D. Williams of Boulder-based Hutchinson Black and Cook LLC, Lolotai used force more than seventy times between January 2017 and June 2020. In 38 of these incidents, a firearm was involved, with takedowns and taser use occurring on multiple occasions. Yet Lolotai remained an officer in good standing with the Boulder force until the late summer of 2020, when he resigned during an investigation into his reported association with an Instagram account that was viewed as celebrating police violence.

City of Boulder communication manager Shannon Aulabaugh declined to comment about the settlement before the council vote under the theory that the issue would "continue to be litigated" should it not be approved. Councilmembers later blessed the deal by an 8-0 margin, but Aulabaugh has not yet provided a statement.

Before joining the Boulder Police Department, Lolotai, who played football for the University of Hawaii and the University of Northern Colorado, was employed as a deputy for the Denver Sheriff's Department. But his stint with the agency was short-circuited by a December 2014 encounter with Denver Detention Center inmate Isaiah Atencio Arguello. Lolotai was caught on video roughly pushing Arguello down a set of metal stairs, after which he and another colleague manhandled him. An investigation followed, and in June 2015, before the inquiry could be completed, Lolotai resigned — but not before applying to sign on with the Boulder Police Department.

Lolotai wasn't brought aboard at that time, but he joined the BPD in 2016. In a previous interview, Aulabaugh pushed back on any negative assumptions about the process. "The City of Boulder does not hire police officers who have any sustained use-of-force allegations," she said. "Any assertion that the Boulder Police Department directs officers to resign before they can be found guilty of a use-of-force allegation in order to be hired by the City of Boulder is absurd and completely inaccurate."

Nonetheless, Lolotai was involved in several controversial incidents during his time working for the Boulder police — among them, slapping away a phone from a woman who was subsequently cleared of any wrongdoing, and being among the officers who pulled guns on Zayd Atkinson, a Naropa student of color, on his own property. (Atkinson eventually received a $125,000 settlement from Boulder over the matter.) In addition, he was the focus of a 2019 lawsuit filed by Kelly Clark, whom he shoved to the ground while she was observing the arrest of another suspect. But that complaint was dismissed in February 2020 over a technicality; a judge determined that Clark came closer to the officer than the eight feet specified in a Boulder statute.

Here's a video showing some of Lolotai's controversial actions while with the Boulder Police Department:
Here's how attorney O'Connor explained Lawrence's complaint against Lolotai in March 2021, when the lawsuit was filed:

"Sammie Lawrence was present at the Mapleton ballfields on April of 2019, just hanging out, when he saw friends who were sitting on the ground get approached by Officer Lolotai," O'Connor said. "He decided to monitor what was going on, to observe how his friends were treated by the police — and he has knowledge of his own about how rough the police treat people experiencing homelessness."

Lawrence "has a seizure disorder and uses a walking aid," O'Connor went on. "He could not have approached more slowly or more deliberately. He was not posing a threat in any way when he came on the scene. He got about ten feet or more from Officer Lolotai and didn't interject anything, didn't say anything. He was just watching — but Officer Lolotai told him to step back and put down his weapon." That was the cane.

In O'Connor's view, this command "is ridiculous on its face. There was no action on Sammie's part that indicated a threat or the intent to use his walking aid as anything other than a walking aid. The only time he even lifted the walking aid off the ground was to show that there was a rubber piece on the bottom to assist him with walking. He didn't brandish it or anything like that — but Officer Lolotai tackled him anyway."

This move was on brand for Lolotai, as evidenced in the following rundown of 78 use-of-force incidents, supplemented by the number of days between episodes. Many of the actions are separated by only a few days, with some dates registering multiple uses of force.

It wasn't easy convincing the Boulder Police Department to agree to make its use-of-force stats public. "I can tell you that we came to an agreement about the settlement amount sooner than we did about the release of data, and that it was very important to our client," O'Connor says. "It was important because the City of Boulder repeatedly claimed Officer Lolotai was a fine officer prior to the filing of the lawsuit, yet there has been no basis, such as the pattern of its officers in using force, upon which to make such claims. This data will show us what the average police officer's use of force looks like, to compare to that of Officer Lolotai, or other officers that may come under scrutiny in the future."

O'Connor adds: "Boulder staff and the Chief of Police referring to Officer Lolotai as a fine officer — and other positive statements about his being a good officer — when they knew or should have known that he was using force every week, and often every couple of days, strongly suggests that all those who defended him in this manner were too willing to excuse his penchant for violence. The fact that the Boulder Police Department hired him while he was under investigation for excessive use of force also points to this conclusion, because they chose to hire an officer even before he was cleared of wrongdoing."

The settlement agreement language suggests that "the city expected to spend a similar amount if they had to continue litigating," O'Connor continues. "That wouldn't have been the case if it was a meritless complaint. For Mr. Lawrence, it is a vindication of what he asserted all along: that he had every right to simply observe and film the police, and that he never did anything to obstruct Officer Lolotai in a public park."

Click to read Sammie Lawrence v. City of Boulder, et al.
KEEP WESTWORD FREE... Since we started Westword, it has been defined as the free, independent voice of Denver, and we'd like to keep it that way. With local media under siege, it's more important than ever for us to rally support behind funding our local journalism. You can help by participating in our "I Support" program, allowing us to keep offering readers access to our incisive coverage of local news, food and culture with no paywalls.
Make a one-time donation today for as little as $1.