Broncos Training Camp Offers Little Hope That the Suckage Is Over

One of the smallest fans at Broncos training camp was nostalgic for the good old days of 2016. Michael Roberts
The weeks leading up to the start of the NFL season are traditionally a time of hope for fans of every team, but particularly those, like your Denver Broncos, that have sucked like a prairie tornado in recent years. But a visit to Broncos training camp Sunday, August 4, offered precious little reason for optimism.

While there were some bright spots, especially on the defensive side of the ball, the overall takeaway suggested another sixteen regular-season games dominated by disappointment and humiliation, followed by a failure to make the playoffs for the fourth time since Denver's February 2016 victory in Super Bowl 50.

Despite being a lifelong Broncos supporter, I had never attended a training camp workout until last July, when my super-fan daughter Lora and I checked out the squad during a session at the UCHealth Training Center. And even though the weather was unseasonably cold to a bizarre degree, we had a great time and found ourselves looking forward to a turnaround campaign thanks to the arrival of new Broncos quarterback Case Keenum, who seemed ready, willing and able to provide the sort of field-general professionalism the unit had been lacking since the retirement of Peyton Manning.

Oh ,man, was I wrong. Keenum wound up being magnificently mediocre, and despite the emergence of rookie running-back sensation and University of Colorado alum Phillip Lindsay, the offense proved anemic in the extreme. As a result, the defense, which remained talented, was overworked and exhausted contest after contest, leading to a mere six wins and a whole series of shakeups, including the firing of coach Vance Joseph for new head man Vic Fangio and the dumping of Keenum for Baltimore Ravens veteran Joe Flacco. 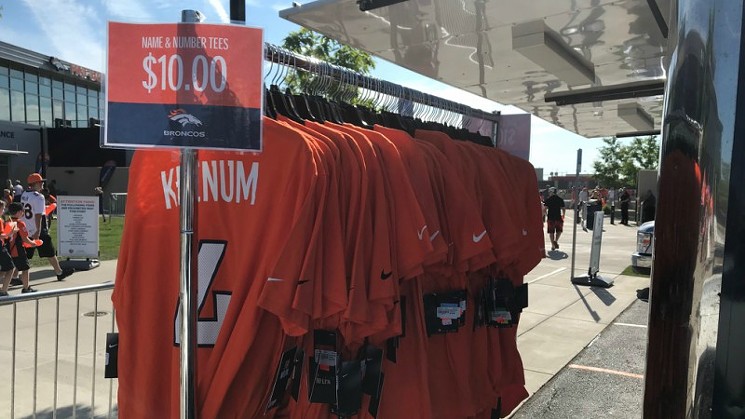 Trying to make a few bucks off unhappy memories.
Michael Roberts
Fangio has struck a chord with the Broncos faithful, and he further endeared himself by coaching the outfit to a win in his first pre-season game over the Atlanta Falcons last Thursday, August 1, after being treated for a kidney stone earlier that day.

But there's no evidence that anyone other than Big Joe's immediate family is wacko for Flacco, and the performance of alleged QB-of-the-future Drew Lock in last week's match-up brought back uncomfortable memories of Paxton Lynch, one of Denver's biggest draft busts ever.

Against this backdrop, Lora and I arrived at UCHealth around 9 a.m. on the 4th and were immediately greeted with the sight of a rack filled with discount Keenum T-shirts — an unhappy reminder of how wrong things had gone in the past twelve months.

The same can be said of the light attendance for the session.

The Broncos do a terrific job of making training camp accessible to folks: no admission charge, plenty of parking, easy availability of water and sunscreen (which I foolishly eschewed, resulting in my skin looking like pink salmon flesh today), and the opportunity to get up close and personal with the athletes, who are encouraged to be interactive. But unlike the Manning years, when every camp get-together was mobbed, the gathering on Sunday proved to be middling at best. 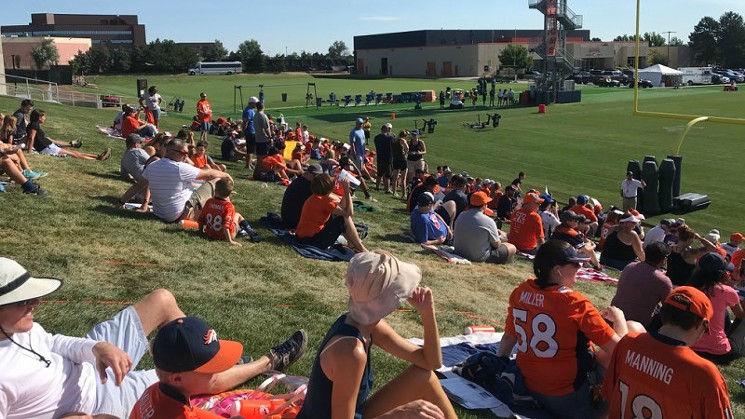 The crowd at Broncos training camp on August 4 wasn't exactly standing room only.
Michael Roberts
From the beginning, there was plenty of room on the hillside that serves as a de facto amphitheater for the camp, and within an hour or so, the area became even more wide open as dozens of young children melted down in the extreme heat, prompting their families to split.

Start time for the workout was 9:15, and under Fangio, activities got under way promptly, with stretching sessions accompanied by music pumped out by the public-address system; the coach's ban on jams, intended to send the message that training camp is a time to work rather than goof off, didn't kick in until later. As such, irrepressible safety Will Parks got a chance to boogie, much to the delight of those gathered before him.

Von Miller, of course, was the biggest draw, and his attendance was a pleasant surprise. After all, he had been among the Broncos dignitaries who'd been in Canton, Ohio, the previous day for the induction of late owner Pat Bowlen and legendary cornerback Champ Bailey in the NFL Hall of Fame.

But Von was on hand first thing Sunday morning and led the crowd in a clapping session before taking part in a couple of not exactly taxing drills alongside sidekick Bradley Chubb, who seems on the cusp of superstardom. Bradley Chubb and Von Miller were two of the biggest attractions at Broncos training camp.
Michael Roberts
Shortly thereafter, the real work of the morning got going, and the defense consistently looked sharp. Among those who stood out were Justin Simmons, a safety who some pundits see as being on the bubble this year, inside linebacker Alexander Johnson and Chris Harris Jr., the veteran cornerback who went through off-season drama in order to secure a one-year contract extension.

Harris came across as a strong leader while on the sidelines and a determined defender — and after he intercepted a ball thrown by Flacco, he couldn't have been more thrilled had team executive John Elway jogged out afterward and publicly apologized for disrespecting him.

Okay, maybe not — but Harris's pick was emblematic of the advantage the defense had over the offense in virtually every scenario.

Yes, Flacco looked the most polished of the quarterbacks on the roster, but that doesn't mean he impressed. He tossed at least one other dumb-ass interception in a goal-line drill and was erratic in terms of finding open receivers.

Phillip Lindsay signing autographs for fans at Broncos training camp.
Michael Roberts
Flacco mostly focused on hurling to Courtland Sutton, who overcame an early bobble to put on a fairly strong performance — and it was nice to see Emmanuel Sanders, who injured his Achilles last year, competing in a wide variety of circumstances. But the Broncos' first-round pick, tight end Noah Fant, might as well have been invisible, and players such as Tim Patrick and Juwann Winfree had some notable drops.

Even worse was Lock, who mixed in a few good passes with a lot of errant ones; he frequently threw behind receivers or failed to lead them properly, and in actual scrimmage scenarios, he lingered in the pocket way too long, as young, inexperienced quarterbacks tend to do. He appeared to be a face-plant sack, or a slew of them, waiting to happen.

The roster's other QBs — Kevin Hogan and Brett Rypien — were similarly uninspiring and inconsistent, and the defense knew it. In the scrimmages, the men of D reacted like sharks scenting blood after each stuffed run, incompletion and pick. Expect to see lots of that this season from dudes wearing different color jerseys.

Afterward, a number of players ambled over to the fans to sign autographs, with Miller and Lindsay proving to be by far the most popular. But the smallish size of the crowd should send a message to the Broncos brain trust. The number of those confident Denver is on the road to redemption is getting smaller, and if the team suffers through another sub-par year, it will continue to shrink no matter how good a training-camp show the franchise puts on.
KEEP WESTWORD FREE... Since we started Westword, it has been defined as the free, independent voice of Denver, and we'd like to keep it that way. With local media under siege, it's more important than ever for us to rally support behind funding our local journalism. You can help by participating in our "I Support" program, allowing us to keep offering readers access to our incisive coverage of local news, food and culture with no paywalls.
Make a one-time donation today for as little as $1.