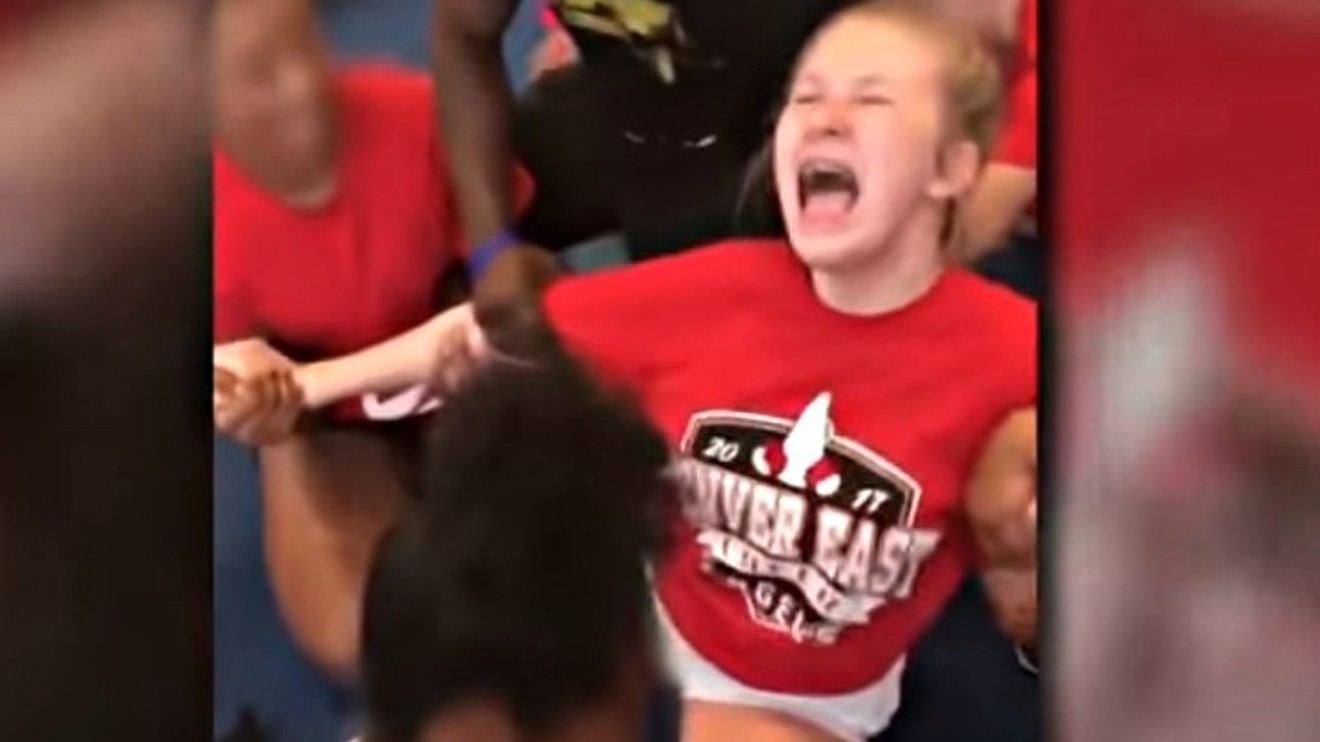 East High cheerleader Ally Wakefield being forced into the splits position. 9News via YouTube
Update: After the publication of this post, the Denver District Attorney's Office reached out to deny that releasing the decision not to file criminal charges in the East High School cheerleader-videos story on a Saturday afternoon was a strategy to bury the story. The explanation provided by the DA's spokesperson is at the bottom of this item, following our previous coverage.

Original post: On Saturday, October 14, in an extraordinarily blatant attempt to bury a controversial decision, the Denver District Attorney's Office announced that it would not file criminal charges over videos of East High School cheerleaders crying out in agony while being forced into the splits position. But the prospects of the case winding up in court haven't disappeared. Two families are working with one of Denver's most dogged and successful civil-rights attorneys, who's issued a statement that hints strongly at the prospect of future litigation.

In August, as we've reported, a video of thirteen-year-old East cheerleader Ally Wakefield screaming in pain went viral on a cat-playing-piano, double-rainbow, Numa-Numa-guy level. In the immediate aftermath, public scrutiny fell on cheer coaches Ozell Williams and Mariah Cladis, two East High administrators and a Denver Public Schools official, who were put on leave in the wake of the controversy.

The footage, which shows Ally being held down by Williams and three teammates while begging them to stop, was initially leaked to 9News. It wasn't new: The incidents captured on cell phone actually took place back in June, after which point Ally's mother, Kirsten Wakefield, is said to have contacted East High assistant principal Lisa Porter about them. Moreover, other videos revealed that additional cheerleaders were treated in the same way, including Anna Nickolay, whose mom, Cheri Nickolay, made her displeasure known in multiple media interviews. 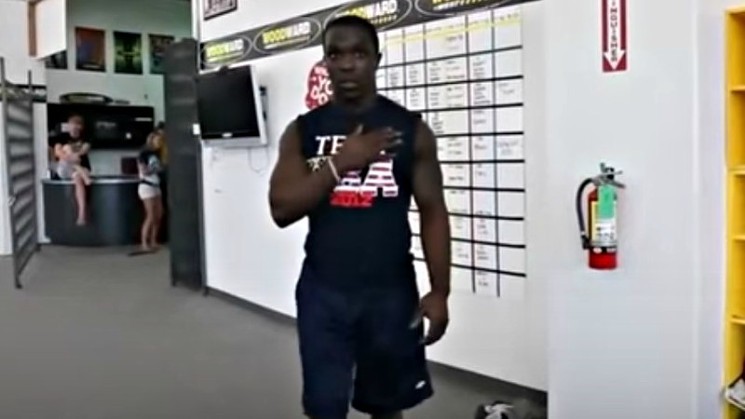 Cheer coach Ozell Williams in a Mile High Tumbers video.
YouTube file photo
That left the possibility of prosecution against Williams and Cladis — but Denver District Attorney Beth McCann poured cold water on the matter in the following statement, issued after 3 p.m. on Saturday, a time that qualifies as a news black hole:

"The video of the incident involving the injured student that has been widely disseminated is painful to watch. However, after a very thorough and careful review of all of the evidence gathered in the investigation and the statements of many members of the cheerleading squad, I have concluded that the evidence does not support the filing of criminal charges. In order to prove a charge of criminal behavior, the case must be proved beyond a reasonable doubt.

"The individual involved should not be a coach in high school sports, and he no longer is. The principal and athletic director of the school have retired and resigned. The message should be clear that this type of technique has no place in high school cheerleading coaching. The bad judgment of the coach, however, does not constitute a prosecutable crime."

This position makes perfect sense from a legal standpoint, but it did little to squelch the anger of Ally's and Anna's parents — and neither did a subsequent request by Denver Public Schools for "news media to refrain from showing videos of the 'forced splits' in covering this issue." But they've got an outlet for their frustration: Qusair Mohamedbhai, an attorney whose efforts have been frequently documented in this space.

After McCann went public with her no-file determination, Mohamedbhai issued a statement of his own on behalf of Ally's and Anna's loved ones. It reads:

"The Wakefield and Nickolay families continue to focus on their daughters' physical and emotional healing. While the families disagree with the decision of the Denver District Attorney's Office, they appreciate the kindness and genuine concern demonstrated by DA Beth McCann through this difficult process. The families are determined to ensure no other student athletes are subjected to any form of abuse at the hands of adults entrusted with their care."

The most obvious way to achieve this last goal is to make DPS and others associated with the splits matter pay in civil court.

We've reached out to Mohamedbhai, and if and when he shares additional thoughts with us on the topic, we'll update the story in this space. Click to view the Ally Wakefield video.

"DA McCann wanted to meet with the injured cheerleader’s parents & lawyer, and other cheerleader parents, so she could explain to them in person her decision and rationale. They picked Saturday afternoon for the meeting. DA McCann correctly believed it would be inappropriate for her to ask the attendees to not discuss her decision until Monday, and we decided therefore that we needed to announce the decision after the meeting — so as to NOT keep the public in the dark.

"The announcement was immediately distributed to over 100 media persons and news outlets, including you and Westword, apparently, in your words, in a blatant attempt to bury the decision.

"DA McCann made herself available to all news outlets who requested an interview and in fact was interviewed by Denver media stations."