Another Win for Attorney Threatened With Jail for Talking to Westword 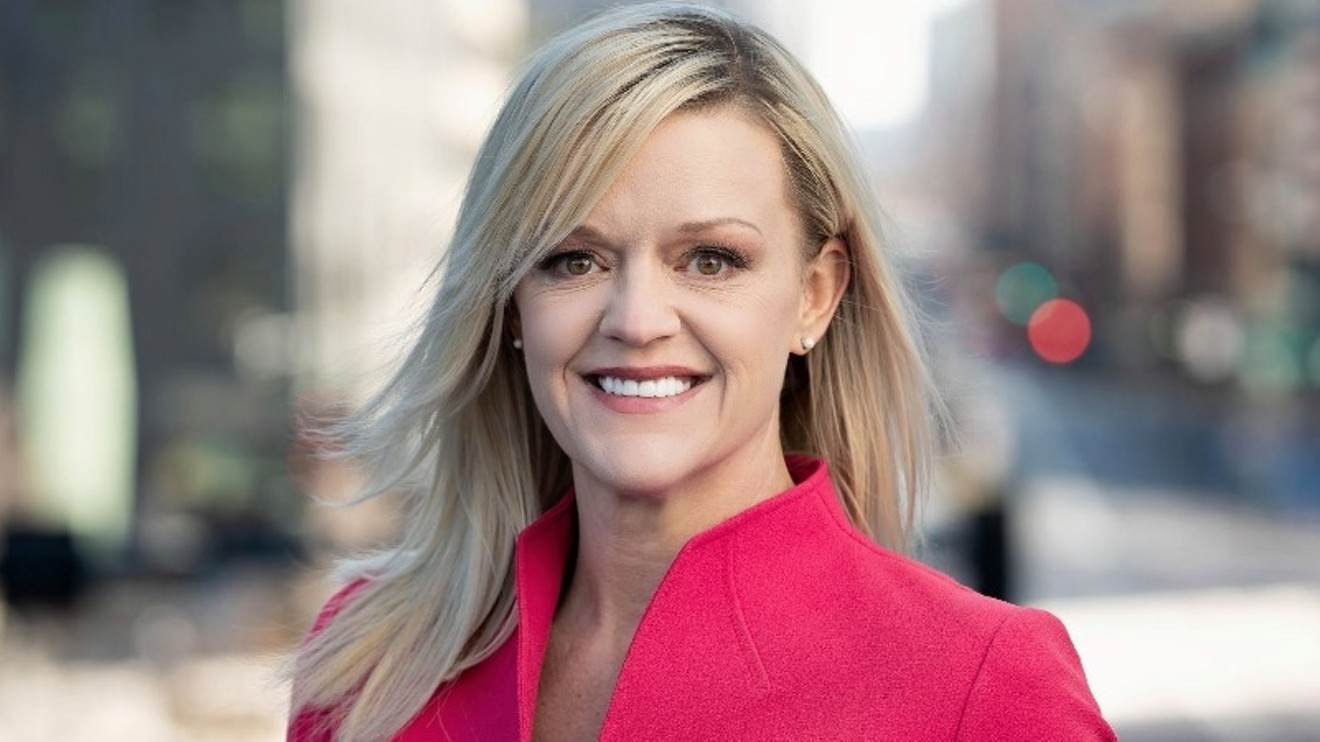 Attorney Jessica Peck's latest court victory happened on the federal level. pecklawcolorado.com
On August 9, the 10th Circuit Court of Appeals affirmed a significant part of a March 2021 ruling that found subsections of the Colorado statute collectively known as the Children's Code to be unconstitutional, based largely on First Amendment grounds — a decision that flowed from a lawsuit filed by Denver-based attorney Jessica Peck after she was threatened with jail for talking with Westword regarding a 2019 story.

That article's subject: a mother at risk of having her toddler daughter taken away from her by the state because she supported her ex-husband, accused murderer John Affourtit.

The defendants in the case were Denver District Attorney Beth McCann and Michelle Barnes, executive director for the Colorado Department of Human Services, which argued that the statutory language of the Child Abuse Prevention and Treatment Act (CAPTA) makes federal funding for state child-protection systems conditional on the use of "methods to preserve the confidentiality of all records in order to protect the rights of the child and the child's parents or guardians, including requirements ensuring that reports and records...shall only be made available to [specified persons, entities and agencies]."

In his opinion, though, the 10th Circuit rejected the idea that Colorado had to restrict free speech under these circumstances. "It is no excuse for a state that is violating the constitutional rights of its citizens to say 'The federal government is paying us to do it,'" he wrote.

"I think that's the best line in the whole decision," Peck says.

The case against Affourtit began on September 25, 2018, when police and medical personnel responded to a report of a child not breathing in an apartment on the 900 block of South Dahlia Street that he occupied with his girlfriend and her three-year-old son, Jeromiah. The boy could not be revived, and after the Denver Medical Examiner's office determined that his death was the result of physical harm, Affourtit was arrested and charged with two counts of murder in the first degree for a child under twelve/position of trust and child abuse resulting in death.

A subsequently released affidavit revealed that Affourtit, who was unemployed and had been watching Jeromiah while his mother was at work, told authorities that the boy had recently been sick and suffered head injuries after falling into the bathtub. Law enforcement officials didn't think this story adequately explained Jeromiah's wounds, which included a possible shoulder dislocation; they suggested that an infection in his abdomen that was the likely cause of death had been caused by abuse. Moreover, Affourtit had a previous mark on his record: In 2011, he'd allegedly violated a protection order involving a former girlfriend.

Nonetheless, his ex-wife saw "alternate explanations" for the cause of death, in part because there were no injuries to her daughter, who was at the apartment when Jeromiah's health crisis took place. As Peck told us in 2019, this stance led the mother to become the target of "a dependency neglect case, where the government can exert its authority and power to take my client's child — and they're threatening to do that. They argue that my client has failed to demonstrate adequate protective capacity, which under statute would allow DHS and Child Protective Services to obtain custody."

Among the justifications for such action was the claim that the mother put the girl on the phone with Affourtit after his arrest, in potential violation of a protective order, as outlined in an email Peck provided to Westword. Peck said the alleged phone call between Affourtit and his daughter "never occurred."

As noted in a March 11, 2021, ruling by U.S. District Court Judge R. Brooke Jackson, the juvenile court magistrate subsequently issued an order stating that "Counsel for Respondent Mother...may have disclosed confidential identifying information to a non-party" — a criminal offense under Colorado law.

Neither the Denver DA's office nor the Colorado Department of Human Services took action against Peck in connection with that order; in his decision, the 10th Circuit pointed out that "records dating back to 1966 indicate that Denver’s District Attorney has never prosecuted anyone" under the section of the Children's Code in question. But because of what she saw as a chilling effect on her right to free speech, Peck filed suit against McCann and Barnes in their official capacities, and Judge Jackson found that the two Children's Code passages related to punishment for either a Class 2 petty offense (a fine of not more than $300) or a Class 1 misdemeanor (a minimum six months in jail or a $500 fine) "fail strict scrutiny and are therefore unconstitutional." As a result, he granted Peck's motion for summary judgment and enjoined enforcement of the two passages.

"We are disappointed with the court’s order holding that the criminal provisions within the Children’s Code Records and Information Act are unconstitutional," said Colorado Department of Human Services spokesperson Madlynn Ruble after that ruling. "Colorado’s legislature passed these provisions years ago to protect a child and family’s right to privacy when involved in the child welfare system. Keeping reports of child abuse and neglect confidential in their entirety, except where a professional or agency has a legal right to know, is key to protecting the privacy of vulnerable children and their families. We are currently weighing our options for next steps."

CHS and the Denver DA's office subsequently appealed to the 10th Circuit, and while much of the 10th Circuit's opinion echoes Jackson's, he disagreed that the two key sections of the Children's Code "covered the same speech and were both unconstitutional." Instead, he found only one to violate the constitution and said the lawsuit hadn't properly challenged the second. As a result, he struck down the section he saw as unconstitutional, asked the district court to figure out if it is "severable from the rest of the statute," and left the other section in place.

Nonetheless, David Lane of Killmer, Lane & Newman LLP, which represented Peck, finds the ruling to be "hugely significant, because 48 other states have similarly unconstitutional laws on their books which unlawfully prevent attorneys involved in child abuse cases, such as Jessica Peck, from blowing the whistle on government incompetence and corruption." Prior to this Colorado case, the only state excepted from this scenario was Tennessee, and the 10th Circuit said there was no evidence that it had missed out on federal funding because of its narrower statutory language.

The Denver District Attorney's statement about the ruling reads: "We will review the decision and have no comment at this time." The response from the Colorado Department of Human Services is lengthier:

We are disappointed with the 10th Circuit Court of Appeal’s decision to strike down one of the penalty provisions, section 19-1-307(4), in the Children’s Code Records and Information Act. Colorado’s legislature passed this provision years ago to protect a child and family’s right to privacy when involved in the child welfare system. Keeping reports and records of child abuse and neglect confidential, except where a professional or agency has a legal right to know, is key to protecting the privacy of vulnerable children and their families.

We remain committed to protecting the privacy of children and families, and encourage anyone who is concerned about the safety and well-being of a child or youth to call the Colorado Child Abuse and Neglect Hotline at 844-CO-4-Kids.

Peck says she hopes that the Colorado Legislature "will scrap the entire statute and start over," and considers the ruling most important for "parents out there who feel they have no voice. They've been told they have to remain absolutely silent, and now they get their voices back. That means a lot.

"When clients come into my office," she adds, "They'll often say, 'You were threatened with jail because of some Westword story?'"

And then she laughs.

The trial of John Affourtit, which was delayed because of the COVID-19 pandemic, is scheduled to get underway on September 26 in Denver District Court. According to Peck, Affourtit's ex-wife retains custody of her daughter. Click to read the March 2021 order in the case of Jessica Peck v. Beth McCann, et al. and the 10th Circuit Court of Appeals opinion.
KEEP WESTWORD FREE... Since we started Westword, it has been defined as the free, independent voice of Denver, and we'd like to keep it that way. With local media under siege, it's more important than ever for us to rally support behind funding our local journalism. You can help by participating in our "I Support" program, allowing us to keep offering readers access to our incisive coverage of local news, food and culture with no paywalls.
Make a one-time donation today for as little as $1.