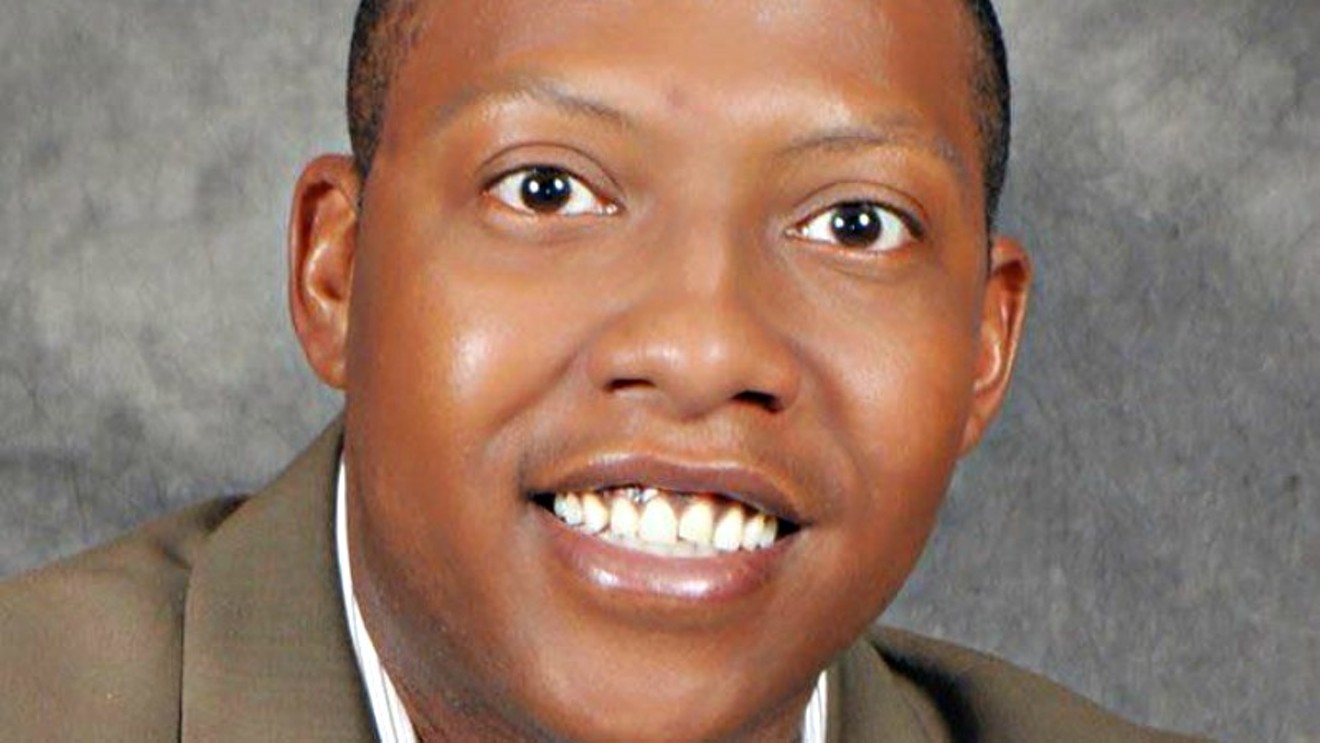 The reason is timing, pure and simple. Had these charges surfaced during a previous era, when the boys-will-be-boys philosophy still held sway, a legislator as skillful as Melton, who's currently running for his fourth and final term, might have been able to navigate his way through the controversy. But fortunately, blessedly, this mindset has been thoroughly debunked, and the party of which Melton is a member has been working hard to align itself with a newer, better worldview in which sexual abuse and harassment is consistently called out and passionately condemned, and accusers are believed instead of belittled.

As a result, any Democratic official faced with credible accusations of such impropriety — and the ones against Melton are backed up by police reports and court records — immediately becomes radioactive. And right now, Melton most assuredly is.

There's no denying that Melton has been an active and progressive voice in the Colorado General Assembly. Look no further than Westword's reports about his co-sponsorship of the Right to Rest act and the recent marijuana-tasting-room bill. He's also served as a mentor for fledgling politicos such as Tay Anderson, currently running for the Denver Board of Education, and he's played a prominent role at events such as July's "I Want My Party Back" conference. 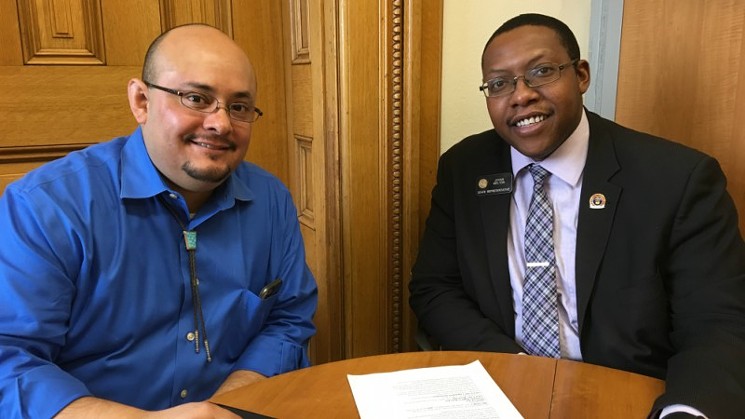 Representative Jovan Melton with Right to Rest act co-sponsor Representative Joseph Salazar, who's spoken out on his behalf in the wake of domestic-violence allegations against him.
Photo by Chris Walker
But then the bombshell. On October 9, the Denver Post revealed that Melton had been arrested twice on domestic-violence charges during the past two decades — the first time in 1999, when he was twenty (he pleaded guilty to harassment in that matter), and most recently in 2008, in a case that was subsequently dismissed.


Serving House District 41 has been the honor of my life, and when I ran for this seat six years ago I never said I was perfect, but I strive to give a voice to underserved communities. First let me acknowledge that violence or aggression against women is never okay, and the allegations reported in the Denver Post and captured in the police reports from 1999 and 2008 demonstrate that as a young man I fundamentally lacked the emotional acuity to be able to properly manage emotional and stressful situations. While I categorically deny any allegations that suggest any violence against the women involved, I am both embarrassed and heartbroken to be reminded of my immaturity all those years ago. As both a victim of childhood violence and to have caused pain and anguish for these women is horrible and for that I am sorry. I hope that both women can forgive me for the emotional pain that I've caused them.

I'm reminded of an old saying that my past will not define my future. Today, I am stronger, more mature and deeply committed to seeking the appropriate counseling to ensure that my emotions never fuel these types of events in the future. As a black man, the odds are stacked against us from the beginning, but as I stand today, I want to remind young men of color that violence or aggression against women is never acceptable. As a legislator, I now have an obligation to serve not only young people of color as a role model, but to be an advocate for women who witness or are victims of violence, assault, or aggression. I look forward to putting my head down and working on these issues with my colleagues in the legislature in January.

Melton also posted on Facebook after Colorado Politics spoke to the woman involved in the 2008 incident, which she characterized as having been "blown out of proportion" by the arresting officer in a way that she suggested smacked of racial motivation. She stressed that nothing violent had happened and called Melton "a good guy. I believe in him."

So, too, do Webb and folks such as Bishop Acen Phillips, who at yesterday's press event referred to the surfacing of old charges against Melton as a "21s-century lynching of a black man." 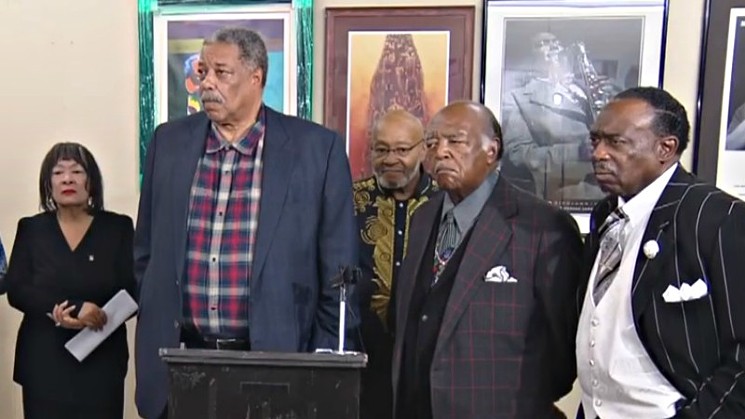 Former Denver mayor Wellington Webb was among the political and faith leaders speaking out on Representative Jovan Melton's behalf at a press event on October 11.
CBS4 via YouTube
Phillips is clearly implying that the likeliest source of the information about Melton is a political enemy who wanted to Al Franken him during a period when the fight for control of each house in the Colorado Legislature is especially fierce. But Colorado Secretary of State spokesperson Lynn Bartels tells us a reporter from the Post contacted that office last month seeking dates of birth as part of a project to do background checks on all candidates — and she later heard from a source within the Colorado Republican Party who essentially confirmed it.

No matter how the Post learned about Melton's past arrests, the damage remains — and that means his fellow Dems lack an effective way to shrug off the 1999 guilty plea. Any suggestion that he should be given a pass because he was only twenty at the time can be answered in two words: Brett Kavanaugh.

Note that the list of Democratic leaders pushing for Melton to step down includes gubernatorial candidate Jared Polis, echoing a similar recommendation from Republican nominee for governor Walker Stapleton. And Polis and Stapleton agreeing on anything speaks volumes about the odds of Melton surviving this crisis.

Back in March, Democratic Representative Steve Lebsock refused to resign after being hit with sexual-harassment allegations from at least eleven women. But he was ultimately expelled from the Statehouse, and among those who backed this move was Melton. In addition, Melton signed a letter demanding that Minority Leader Patrick Neville and other Republican lawmakers who posted online jokes targeting Kavanaugh accuser Christine Blasey Ford after the publication of a satirical article be compelled to undergo sexual-harassment training.

Melton won't get off so easily. He's done.

This post was updated to include new information from Colorado Secretary of State's office spokesperson Lynn Bartels.
KEEP WESTWORD FREE... Since we started Westword, it has been defined as the free, independent voice of Denver, and we'd like to keep it that way. With local media under siege, it's more important than ever for us to rally support behind funding our local journalism. You can help by participating in our "I Support" program, allowing us to keep offering readers access to our incisive coverage of local news, food and culture with no paywalls.
Make a one-time donation today for as little as $1.