A trip to DIA doesn't mean you have to eat fast food. Denver International Airport
Even in 2020, when air travel reached historically low levels as the pandemic kept many people at home, Denver International Airport was the third-busiest airport in the United States. With travel making a comeback despite the ongoing pandemic, 2.7 million passengers are expected to make their way through the airport this holiday season alone — and it's highly likely that many of them will be hungry while waiting for flights.

Unlike many major airports, DIA has a lot more than McDonald's and Panda Express, thanks to an initiative that began in 2013 aimed at bringing more local flavor to the airport.

Want to dine and drink in style while you wait for that flight? Here are your ten best options: 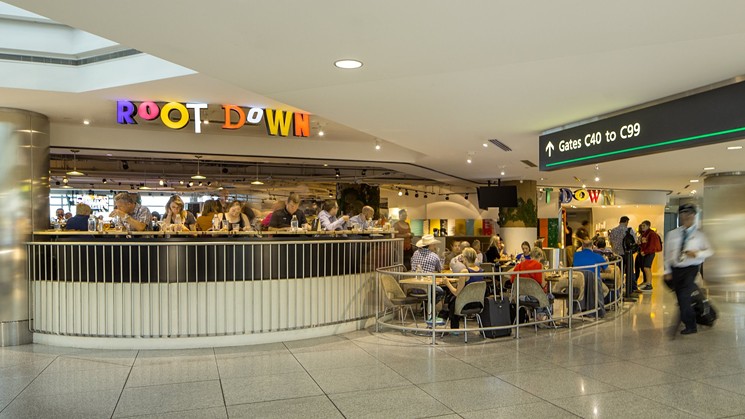 James Florio Photography
Root Down
Concourse C, Center Core
Daily, 7 a.m. to 10 p.m.
Restaurateur Justin Cucci's Edible Beats group includes some of Denver's most popular and unique dining options, from former mortuary Linger to rooftop retreat El Five. The original Root Down opened in the Highland neighborhood in 2009 and remains a favorite for brunch and dinner — which explains why, when it debuted at the airport in 2013, it quickly became a go-to destination in its own right. The globally inspired cuisine includes gluten-free and vegan options, and the veggie burger is a must no matter your dietary preferences.

Snooze
Concourse B, Center Core, Mezzanine Level
Daily, 7 a.m. to 3 p.m.
Root Down got some competition in the airport brunch game with the June 23 opening of Snooze, the popular breakfast brand founded in Denver in 2006. Known for its eggs Benedict duos, boozy brunch drinks and decadent pineapple upside-down pancakes, DIA's newest eatery is highly likely to have a wait...just like the original downtown location.

Denver Central Market
Concourse A, gate 48
Thursday, Friday, Sunday, Monday, 7 a.m. to 8 p.m.; Tuesday, Wednesday, Saturday, 8 a.m. to 6 p.m.
Denver has fully embraced food halls as part of its culinary culture, and in 2018, one of the best in town took four of its concepts to the airport in a mini version of RiNo's Denver Central Market. Pick up a grab-and-go cheese board and sandwiches from Culture Meat & Cheese; breakfast burritos, burgers, rotisserie chicken and more from SK Provisions; nigiri and rolls from Sushi Rama; and pizza from Vero Italian.

Snarf’s Sandwiches
Concourse A, gate 73
Daily, 6 a.m. to 10 p.m.
Jimmy "Snarf" Seidel opened the first Snarf's in Boulder in 1996. It's since expanded to over twenty locations, including the airport in 2018. Sandwiches are served on fresh, oven-baked bread, and options include such classics as turkey and Swiss and the BLT. But if you want to really fly right, go for the always satisfying French dip.

Little Man/Facebook
Little Man Ice Cream
Concourse C, near gate C27
Daily, 8 a.m. to 8 p.m.
It's rare not to see a line outside the giant milk can in LoHi, where Little Man has been serving up popular ice cream flavors like salted Oreo since 2008. The milk can didn't make the trek to DIA, but you can get Little Man's iconic ice cream in cups, cones, sundaes, milkshakes and more when you need a little sugar boost before boarding.

Steve’s Snappin’ Dogs
Concourse B, gate 24
Daily, 7 a.m. to 10 p.m.
In 2014, Colfax Avenue staple Steve’s Snappin’ Dogs took its brand of classic Americana to DIA with a menu of loaded hot dogs, burgers and breakfast sandwiches. The dogs themselves are delivered directly from New Jersey; topping options include slaw, chili and cheese, as well as the classic Chicago style. Steve's has a full bar, so you can pair your hot dog fix with a bloody Mary, mimosa or Steve’s Snappin' Ale, made especially for the restaurant by local brewery Bull & Bush.

Elway's Steakhouse/Facebook
Elway's
Concourse B, Center Core
Daily, 7 a.m. to 8 p.m.
Legendary Broncos quarterback John Elway put his name behind this steakhouse concept in the mid-2000s, and it now has four locations in the state, including the DIA outpost, which opened in 2013. If you don't want to splurge on a full steak dinner, the restaurant has plenty of other options, from soups and salads to burgers. Pair your meal with a glass of wine for a little taste of luxury in the middle of what could be chaotic travel.

Brothers BBQ
Concourse A, gate 71
Daily, 10:30 a.m. to 9 p.m.
If you catch the aroma of smoked meat in the air, you're probably near this barbecue joint that got its start in Denver in 1998. The airport location offers all the essentials: sandwiches and plates loaded with your choice of meat, from pulled pork to chopped brisket.

Great Divide Brewing
Concourse C, gate 32
Daily, 6 a.m. to 10 p.m.
Did you spot a yeti at DIA? Then you found Great Divide. The tap house and kitchen has all-day food options along with thirteen of the brewery's offerings on tap, from the popular Yeti Imperial Stout to a strawberry rhubarb sour ale and its Whitewater hard seltzer.
KEEP WESTWORD FREE... Since we started Westword, it has been defined as the free, independent voice of Denver, and we'd like to keep it that way. With local media under siege, it's more important than ever for us to rally support behind funding our local journalism. You can help by participating in our "I Support" program, allowing us to keep offering readers access to our incisive coverage of local news, food and culture with no paywalls.
Make a one-time donation today for as little as $1.