The Denver Diner Sign Has a New Home — Sort Of The Denver Diner sign was loaded on a truck and delivered to Jonny Barber on June 22. Courtesy of JPMorgan Chase & Co.
An 800-pound piece of Mile High history that lit up the corner of Speer Boulevard and West Colfax Avenue for thirty years has a new home — sort of.  The sign of the Denver Diner, which called it quits in early 2021, has been saved. But will it glow again?

Chase, which purchased the site and will open a branch bank there this fall, worked with Colfax Avenue Museum curator Jonny Barber to arrange the donation of the sign. "I was just ecstatic that Chase Bank would have the concern for the community and that they were willing to work with us," Barber says. "I'm tearing up over the fact that such a large corporation like Chase would help."

On June 21, Rusch Signs & Graphics removed the sign from its longtime perch overlooking the city and delivered it to Barber the next day. "Mark at Rusch Signs is the one that actually took it down with a crane. He was the one that was really concerned about the fate of the sign," Barber recalls. He's also the one who put out the public call about the sign being up for grabs in May.

By then, Barber had already been in touch with Chase, and the company was able to get all three parties connected to make the donation happen.

"Mark did a great job; he got it down with no broken glass," Barber notes. "We have it in storage now."

And that's not the only thing Barber has in storage; the Colfax Avenue Museum does not currently have a permanent home. "Please, can we find a location so I can reclaim use of my living space?" Barber pleads.

He's been collecting Colfax-related artifacts for twenty years as a passion project, inspired by the rich history of the street, which is about much more than just iconic signs. "I don't think people really understand the legitimate part Colfax plays in Western history. It's the story of the West, and this story needs to be told," says Barber.

The first incarnation of the museum debuted in 2017, when Barber opened up the collection to the public in a small space inside a florist's shop at 6101 East Colfax. 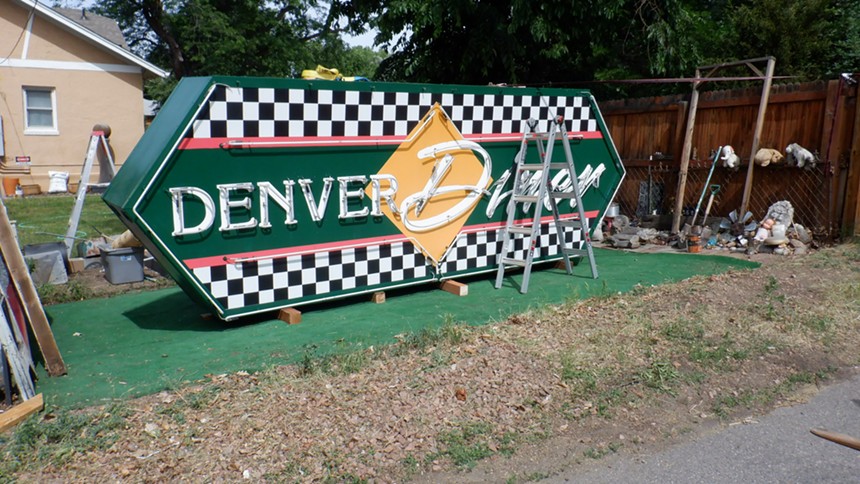 The Denver Diner sign is in storage, for now.
Courtesy of JPMorgan Chase & Co.
The arrangement didn't last long, though, because the shop owner sold the building, so Barber moved his collection into a former pawn shop at 6851 West Colfax Avenue in Lakewood. But there were two floods in the space during the Colfax Museum's run there — which fortunately happened when many of the pieces were on display at DIA. "I think that's a sign that God loves Colfax," Barber quips. Ultimately, the museum moved out, as did the galleries that had found space there when they moved out of Denver; they're now in the nearby 40 West Arts complex in the old Denver Drumstick building.

But the museum was not part of that relocation project.

"Refusing to be contained, The Colfax Avenue Museum now runs the entire length of the Colfax Avenue," reads the museum's website. "We have also created or are in the process of creating installations up and down the corridor."

Those installations include a run at the Route 40 Cafe, which, starting in March 2020, shared some of its space at the Lowenstein Theater Complex with the Colfax Museum. That ended in March, but there is currently an installation at the Sie FilmCenter next door with posters of movies that contain shots of Colfax. And the Forty Years on the ’Fax exhibit is still on display at the History Colorado Center. "They did a fantastic job, but it's the all-ages version of the museum," notes Barber. "The seedier side of Colfax is not represented."

His ultimate vision for the Colfax Museum is a place that's completely inclusive, regardless of race, sexual orientation or seediness. "If it happened on Colfax, it's going in the museum. I'm not censoring it," Barber says. 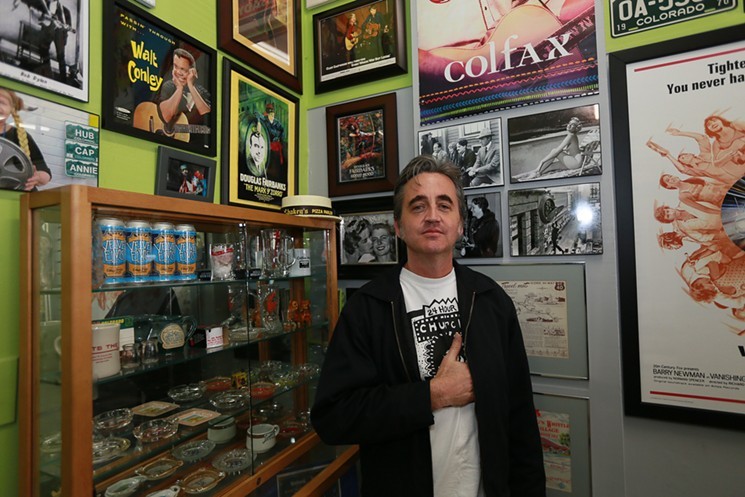 Jonny Barber in the original home of the Colfax Museum.
Brandon Marshall
Barber is getting tired, though, so he's putting out a call to all of those who love and miss old Denver. "I've spent every resource I had collecting this stuff, and I'm tapped out," he admits. "I need help getting it the rest of the way. To get this built is going to take the community; it's going to take much more than me. I'm trying to rally the community."

The collection contains so many items that no one but Barber and his wife have seen them all — which is frustrating for him. "This isn't a vanity project," he insists. "My dream is to see this museum exist."

He's thought of reaching out to Trey Parker and Matt Stone, who are renovating one of Colfax's most iconic landmarks. "We're upping the profile with the South Park guys and Casa Bonita," he notes. "Let's go all the way with it."

But he's not counting on South Park's creators for the save. He's hoping that all of those who also love Colfax, warts and all, will step up to support the effort to find the museum a permanent home so that the full collection — including the Denver Diner sign — can finally tell the uniquely Denver story of Colfax.

"My pledge to Denver, my promise, is that if you give me the resources, I will make you a museum you will all be proud of," Barber concludes. "I don't want it for me. I want it for us."
KEEP WESTWORD FREE... Since we started Westword, it has been defined as the free, independent voice of Denver, and we'd like to keep it that way. With local media under siege, it's more important than ever for us to rally support behind funding our local journalism. You can help by participating in our "I Support" program, allowing us to keep offering readers access to our incisive coverage of local news, food and culture with no paywalls.
Make a one-time donation today for as little as $1.