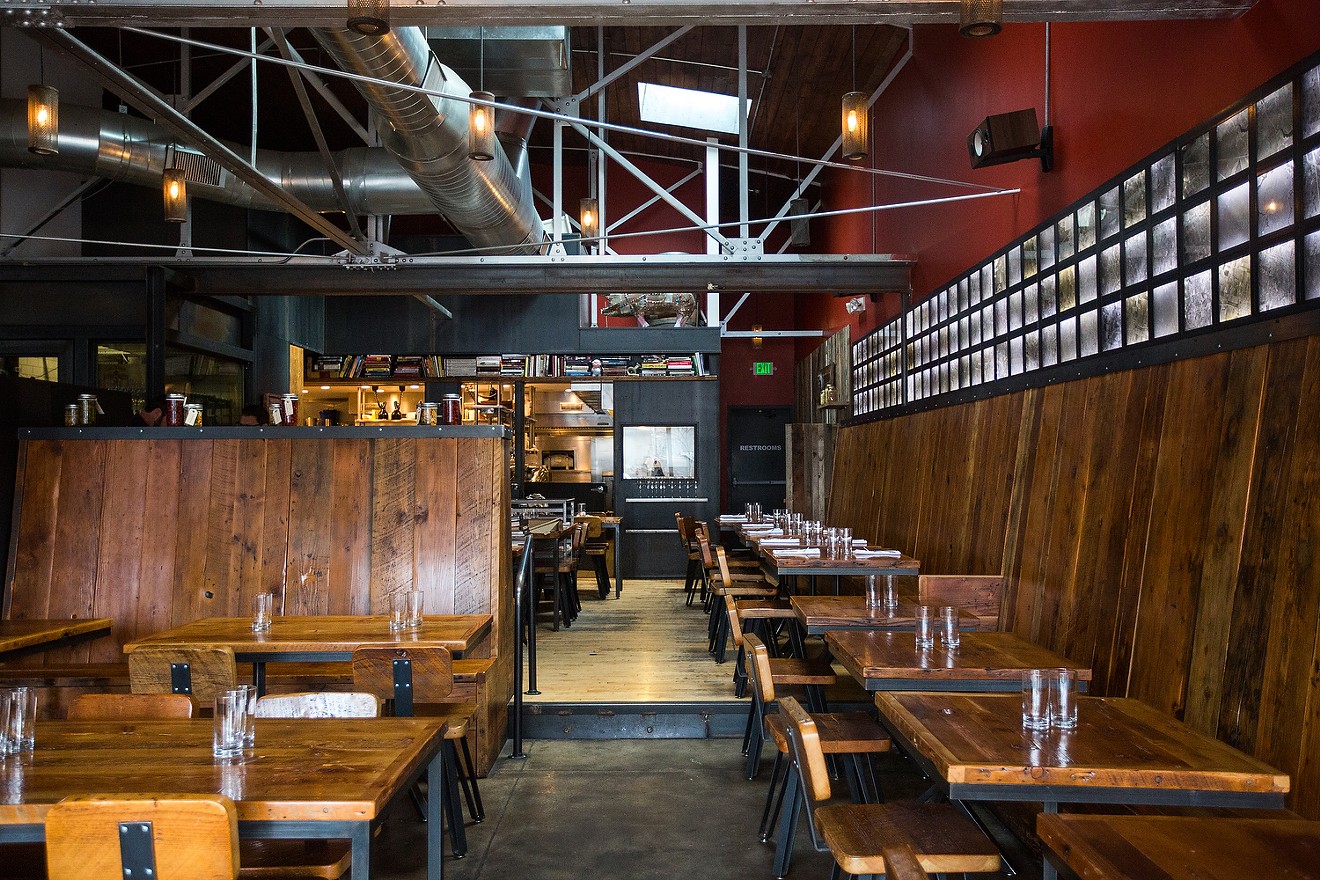 Get cozy at Old Major's fifth-anniversary dinner. Danielle Lirette
This week brings brunch, brews, birthday celebrations and Barack Obama to the culinary calendar (plus a bonus burger for Saturday); Denver Restaurant Week also gets under way on February 23. Behold the best food and drink events over the next few days, as well as big dates for the weeks ahead.

The Denver Central Market has lots of brunch seating. Too bad the same can't be said about parking.
Danielle Lirette
Monday, February 19
If you're one of the lucky few who don't have to work on Presidents' Day, visit the Denver Central Market, 2669 Larimer Street, for an expansive and delicious brunch without the wait. From 10 a.m. to 2 p.m., all of the market's vendors will be serving the mid-morning meal. While you're sipping on classic coffee drinks from Crema or cocktails from Curio Bar, you can indulge in crab-avocado toast with pickled shallots from Tammen's Fish Market; breakfast pizza with pancetta, ricotta, mozz, garlic and an egg from Vero; scrambled egg, potato and fried jalapeño breakfast tacos from SK Provisions; and more. Reservations aren't required, and the wealth of vendors will ensure that you don't end up waiting on the sidewalk for hours. Thank God for the leaders of our great country, public servants who shaped America so that today we may brunch conveniently. Visit the Market's Facebook page for a complete list of specials.

Tuesday, February 20
Nerd alert: If you're tired of scrounging for glassware to bottle your home brew, let Broadway Brew Supply enable your unrealistic dreams of opening the next gold-medal winning nanobrewery at its Kegging 101 class on Tuesday, February 20. The shop at 4391 South Broadway will be teaching a two-hour class starting at 7 p.m., where you'll learn how to design your draft system and keg, condition and serve your homemade beer (we certainly hope you learned how to pour beer before you started making it, but it's never too late). Take the next step toward global craft-beer domination for just $25; sign up for the class (or for future classes on March 20 and April 17) on Eventbrite.

Wednesday, February 21
Denver's favorite pantheon of pig, Old Major, is celebrating five years of serving up swine at its Five-Year Anniversary Dinner on Wednesday, February 21, at 3316 Tejon Street. Starting at 5 p.m., $55 will get you a five-course tasting menu that includes some of the eatery's favorite creations: scallops with potato purée, olives and salsa verde; the nose-to-tail plate with confit ribs, crispy pig ear and sauerkraut; and lemon cake with berry compote and lemon curd. Even better, cocktails will be on special for $5. Make your reservations at oldmajordenver.com or by calling 720-420-0622, then get ready to eat everything but the squeal.

Celebrate Presidents' Day a little late but in good taste with the POTUS Pop-Up on Wednesday, February 21, at 6:30 p.m. The seven-course dinner pays homage to Barack Obama, with dishes that played an important role in the life of the the coolest president (no McDonald's for this commander-in-chief). From Hawaiian classics like musubi and Kailua pork sliders to an elevated Chicago-style hot dog to taro-coriander hand pies with chocolate ice cream, the menu spans island to garden to Midwest fare. The Breakfast Queen Coffee Shop, 2878 South Sherman Street, will be open late to accommodate chef Harold Sims's and host Adrian Miller's culinary love letter to the last president who knew discretion was the better part of valor — at least on Twitter. Tickets, $100, and the complete menu are available at Ticketbud.

Girl Scout cookie season only comes once a year. Take advantage of it.
Danielle Lirette
Thursday, February 22
We're officially in the thick of Girl Scout cookie season, and Renegade Brewing, 925 West 9th Avenue, knows how to get people through the doors of its taproom: a Girl Scout cookie-and-beer pairing. From Thursday, February 22, through Sunday, February 25, the brewery will be offering four beer samples to accompany four cookies for $15 (we expect four courses of Samoas — maybe a Tagalong in a pinch). The carb fest starts at 5 p.m. on Thursday and Friday, and 2 p.m. Saturday and Sunday, and advance tickets are required. Find out more and snag your seat at the table on Renegade's Facebook page.

Gentle readers who still get bent out of shape that Westword covers Boulder as well as Denver: CineCHEF 2018 is the event for you. The event's fourth iteration happens on Friday, February 23, 2018, at Rembrandt Yard, 1301 Spruce Street in Boulder, when Boulder chefs face off against Denver chefs to prove who can create the tastiest, most creative bite based on a beloved film. Last year's roster included Daniel Asher of River and Woods serving smoked scallops, ceviche and Peruvian chile in an homage to Up in Smoke, and Steven Redzikowski of Oak at Fourteenth tapping Mia Wallace to hand out miniature burgers and a $5 shake à la Pulp Fiction. Tickets, $95, are on sale now at ticketfly.com and include admission to the film Michelin Stars: Tales From the Kitchen. So, gentle readers, etc., purchase your tickets and start planning the long and dangerous trip up to The Town That Totally Isn't Part of Denver to support your hometown heroes as they compete in hostile territory.

Keep reading for more tasty events beyond this weekend.