Trends Without End in the Denver Dining Scene

Israeli cuisine, like this shakshouka at Safta, is trending up. Mike Thurk
As we sail into autumn, many of us are more than happy to leave the long (very long), hot summer in the dust. Each season ushers in a new beginning, and with that, a wave of culinary trends that reflect the months that have passed and the ones that lie ahead. Some of 2018’s trending tendencies are extensions of last year’s, including food halls, which continue to dictate Denver’s dining progression. But shifting paradigms are paving the way for new chapters and themes. From fancy toast to hotels focused on changing our thoughts about substandard dining rooms and bars, these are the movements that are gaining momentum on the Denver dining scene. 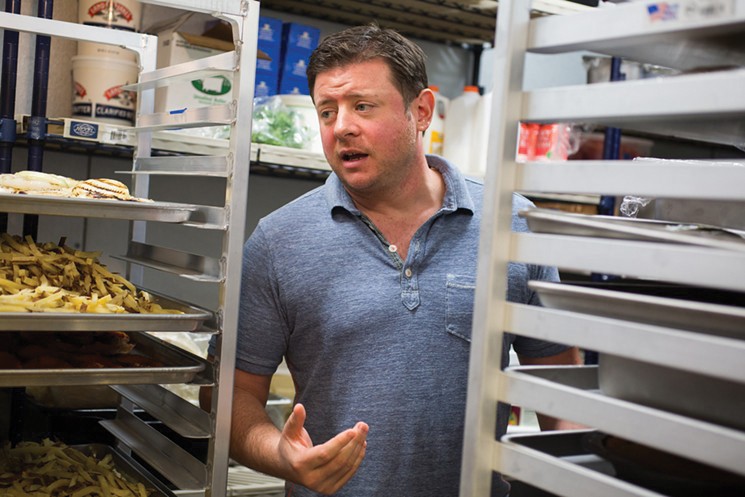 Juan Padro
Danielle Lirette
Empire builders
At some point in their careers, chefs and restaurateurs inevitably face a turning point: one and done, or multiply. This year, in particular, the trend has strongly favored the latter, yielding a proliferation of industry heavyweights choosing to capitalize on their names and brands, thereby surrounding themselves with future possibilities and expanding restaurant empires. And it suggests that we’re at the point (finally!) where taking risks has its advantages. For proof, consider Juan Padro, the founder and visionary behind Culinary Creative Group, which owns and operates Highland Tap & Burger, Tap & Burger Sloan’s Lake, Belleview Tap & Burger, Bar Dough, Señor Bear and the recently opened 7908, a supper club in Aspen. Within the next year, the restaurateur, along with his business partner, Katie O’Shea, will strut a portfolio of ten restaurants, including Morin, a French restaurant opening this fall at Wazee and 15th streets; Ash’Kara, an Israeli newcomer in partnership with chef Daniel Asher; Maine Shack, a clam-and-lobster joint that’s taking up residence in the former Uber Eats space in LoHi; and Sophia, a modern, seafood-intensive Italian restaurant that Culinary Creative is opening in New Orleans. And Padro has company: Troy Guard, Lon Symensma, Dana Rodriguez, Alex Seidel, Josh and Jen Wolkon, Jean-Philippe Failyau, Frank and Jacqueline Bonanno, Jennifer Jasinski and Dave Query — all chefs and restaurateurs who opened triumphant flagship restaurants — continue to innovate, broadening and bolstering a restaurant landscape bursting with talent. 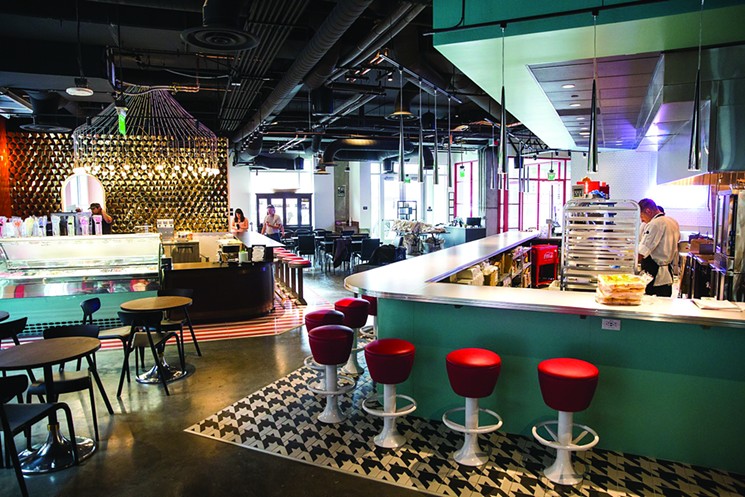 Denver Milk Market
Danielle Lirette
Food halls
When the Source, an urban, European-inspired food and market hall, opened in a weathered RiNo warehouse in 2013, it left little doubt: The food courts of yesterday — the assembly-line chain kitchens with hotel pans sticky with sugared chicken and limp egg rolls — would be sidelined, save for the scant few that still fill the chain-store malls. Instead, the idea that restaurants, butcher shops, fish markets, communal bars, taprooms, chocolatiers and ice cream parlors could co-exist under the same roof took root, paving the way for chefs to experiment with new concepts and diners to eat and drink from multiple vendors in spaces conducive to socializing. Now, several years after the Source first planted the seed, food halls are sprouting up everywhere. Avanti Food & Beverage, Stanley Marketplace, Denver Central Market, Union Station, Zeppelin Station and, most recently, Denver Milk Market — a sixteen-vendor food market from chef and restaurateur Frank Bonanno — have generated cult followings, and there’s no sign of things slowing down anytime soon. On the horizon? North Wynkoop, a three-block market-hall project from the developers of Stanley Marketplace, as well as Broadway Market, a 15,000-square-foot food-and-beverage hall — also from one of the Stanley developers — that will occupy the former Tony’s Market on Broadway.

Toast, toast everywhere
Until recently, we hadn’t spent a whole lot of energy pondering toast, that morning staple usually reserved for soaking up last night’s dubious decisions. That changed this year when Carrie Baird, executive chef at Bar Dough, was a contestant on Top Chef Colorado and brought toast (fancy toast!) to the forefront, showcasing its standout versatility every which way but in the bag. Toast — fancy and otherwise — is having its moment; it’s a local food phenomenon, and chefs are jumping on the bread wagon. At Mister Tuna, chef Troy Guard smears his buttered sourdough bread with sambal pickled radishes, Fontina cheese and slivers of bison tongue. Baird, for her part, tickles a toast lover’s fancy with seasonal creations, including a recent number that involved ciabatta paved with herbed ricotta, fresh blueberries, sweet peas, blueberry balsamic gastrique and pea tendrils. At Call, one of Bon Appétit magazine’s best new restaurants of 2018, chef Duncan Holmes parades a delicious array of toasts on a daily basis: prosciutto and ricotta; broccolini, pepitas and blue cheese; and smoked fish with fresh herbs, garlic aioli and caramelized onions scented with curry powder. 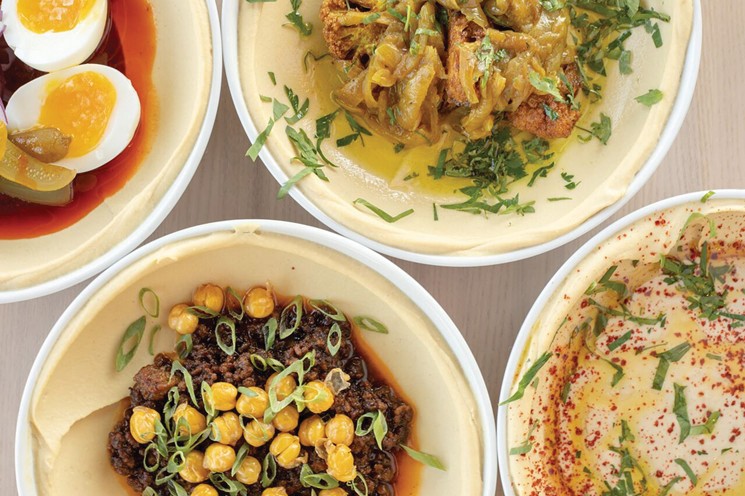 Israeli cuisine from Safta.
Mike Thurk
Israeli cuisine
We’ve long been flush with Vietnamese pho, street tacos in every guise, steaming bowls of Japanese ramen, plates of Indian curries and Argentinean empanadas, but this is the year that Israeli cuisine — long missing from the culinary lexicon of the city — is turning the tables, amping up the city’s food galaxy with chutzpah. The excitement started when we learned that cookbook author and two-time James Beard Award-winning chef Alon Shaya, who opened his namesake Israeli restaurant, Shaya, in New Orleans in 2015, was opening Safta in the new Source Hotel in RiNo. The name, which translates to “grandmother” in Hebrew, is beautiful to behold, its feminine interior offset with deeply personal odes to Israeli cooking flecked with influences from the South and Italy. Here you’ll encounter hummus with cauliflower, another with lamb ragu, one with blue crab and another pressed with a soft-cooked egg. The pita, soft and slightly charred from the heat of a wood-burning oven, serves as a blank canvas for Shaya’s infatuating hummus, tabouleh, baba ganoush, Moroccan carrot salad and ikra, a smooth dip laced with garlic and topped with glistening beads of salty salmon roe. Daniel Asher, the chef of River and Woods in Boulder and culinary director of Acreage in Lafayette, is embracing Israeli cuisine, too. Asher, in partnership with Culinary Creative Group — the kingpins behind Señor Bear, a trio of Tap & Burger restaurants and Bar Dough — are on track to unveil Ash’Kara in the fall, an urbanized Israeli and Middle Eastern restaurant opening in the former Bremen’s Wine & Tap space in Highland. Ancient grains, organic produce and pastured meats will front Asher’s menu, which pays homage to his numerous journeys to Israel. 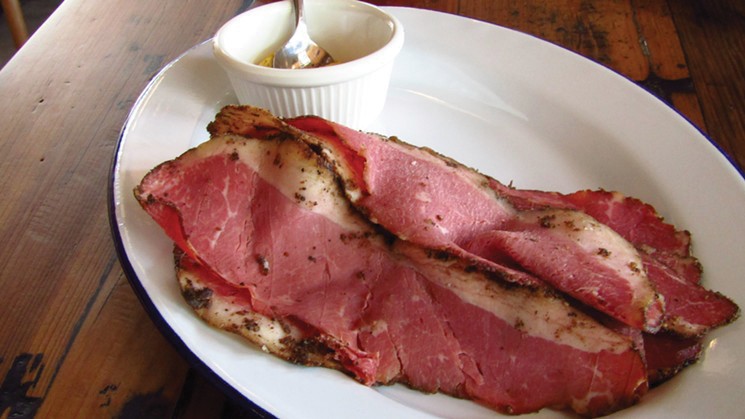 Leven Deli pastrami slices.
Mark Antonation
The new-generation deli
In 2016, the Carnegie Deli, a fixture in New York City for 79 years, shuttered its doors. Jaws dropped to the floor, tears puddled, and ardent proponents of skyscraping pastrami sandwiches commiserated. Was the demise of the Carnegie a signal that the Jewish deli — shmears of Thousand Island dressing, mantles of Swiss and kraut, earthy matzoh ball soup and chicken in the pot that cures colds — had gone stale? Maybe in New York, but while Jewish-ish delis have opened elsewhere, there’s a new generation of delis dominating the Denver restaurant scene, and they’re challenging convention by introducing diners to a new wave of classics. Take, for example, Rye Society, a new deli in RiNo from Jerrod Rosen, whose family roots are steeped in Jewish culinary traditions. The menu, a collaboration between Rosen and consulting chef Ryan Leinonen, chef/owner of the now-closed Trillium, offers old-school matzoh ball soup and chilled beet borscht for purists alongside contemporary spins on things like the Fat Jewish sandwich, a two-fisted heap of pastrami and corned beef on rye that replaces the typical brush of yellow mustard with housemade mustard herbed with tarragon. There are chilled bowls, too, aimed at those who wish to forgo bread, including a robust assemblage of roasted sweet potatoes, quinoa, toasted pumpkin seeds and kale dressed with a tamari-carrot vinaigrette. Over at Leven Deli, a newly opened sandwich utopia in the Golden Triangle, Potager graduates Anthony Lygizos and Luke Hendricks are elevating the deli game with Jewish sensibilities and California party tricks. A deli salad comprising feta, cherry tomatoes, spiced sunflower seeds and pickled onions is cloaked in a buttermilk-yogurt dressing, while a grilled cheese sandwich eschews mundane cheddar for paprika cheese. Even the pastrami Reuben is a step above, the twelve-day, house-cured pastrami mounded with pickled red cabbage and Jarlsberg cheese. And the joint’s fiercely flavored pickled vegetables? It’s impossible to deny their stardom. 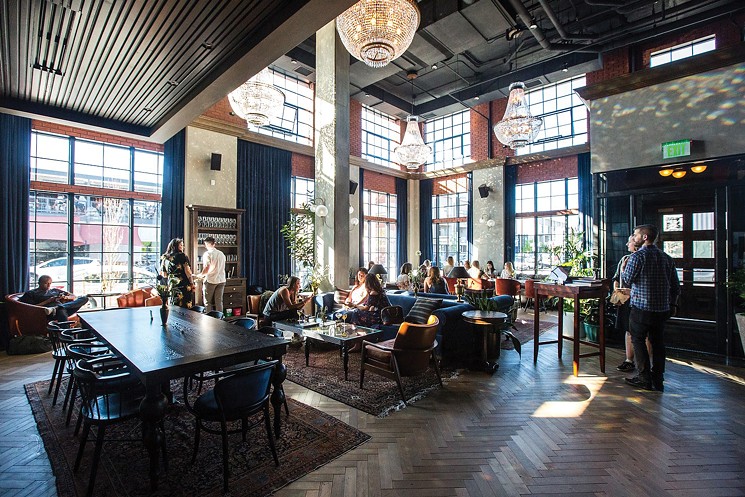 Ramble
Danielle Lirette
Hotel restaurants and bars get serious
We often view hotel restaurants with cynicism. Hotel restaurants, we’re conditioned to believe, are magnets for tourists hell-bent on staying within the confines of their comfort zones. The mere thought of a Denver local holing up at a restaurant with hotel ties has always been, well, unthinkable. But new eateries and watering holes are raising the bar, stomping on the contempt that we’ve been so unwilling to part with. To wit: Super Mega Bien, chef/owner Dana Rodriguez’s pan-Latin, dim sum-style mega-hit inside the boutique Ramble Hotel in RiNo, which also houses Death & Co, a swanky, cocktail-intensive lobby bar that came to Denver from New York’s East Village. The Maven Hotel, which anchors LoDo’s Dairy Block complex, has been equally instrumental in chipping away at the unappetizing image of the blah hotel restaurant and bar, teaming with Sage Restaurant Group to partner with trusted local restaurants like Kachina Southwestern Grill, whose flagship location is in Westminster. The Maven also lays claim to Poka Lola Social Club, an elegant art-deco lounge and bar that channels a bygone era. Elsewhere, Sage brought a captive dining audience to the Oxford Hotel with the debut of Urban Farmer, a modern steakhouse that just happens to collect honey from its rooftop beehives. The Hotel Indigo, near Denver Union Station, has generated a loyal clientele at Hearth & Dram, where rustic wood-fired cooking meets a whiskey lover’s paradise. And speaking of Union Station, the Crawford Hotel is surrounded by many of the city’s best restaurants and bars, not the least of which is Ultreia, chef Jennifer Jasinski’s bi-level Spanish restaurant imbued with a definitive sense of place. The Source Hotel satisfies cravings in RiNo with the Israeli-influenced Safta and Smok, a barbecue spot from chef Bill Espiricueta — and with New Belgium set to start brewing there soon, the 100-room hotel will undoubtedly capture the craft-beer swarm. And then there’s the Kimpton Hotel Born, which boasts both the refashioned steakhouse Citizen Rail and Tavernetta, the ultimate expression of an Italian restaurant from the masterminds at Frasca Food and Wine. Hotel restaurants and bars, the majority of which were weary, are now unexpectedly — and admirably — relevant.
KEEP WESTWORD FREE... Since we started Westword, it has been defined as the free, independent voice of Denver, and we'd like to keep it that way. With local media under siege, it's more important than ever for us to rally support behind funding our local journalism. You can help by participating in our "I Support" program, allowing us to keep offering readers access to our incisive coverage of local news, food and culture with no paywalls.
Make a one-time donation today for as little as $1.
Lori Midson
Contact: Lori Midson