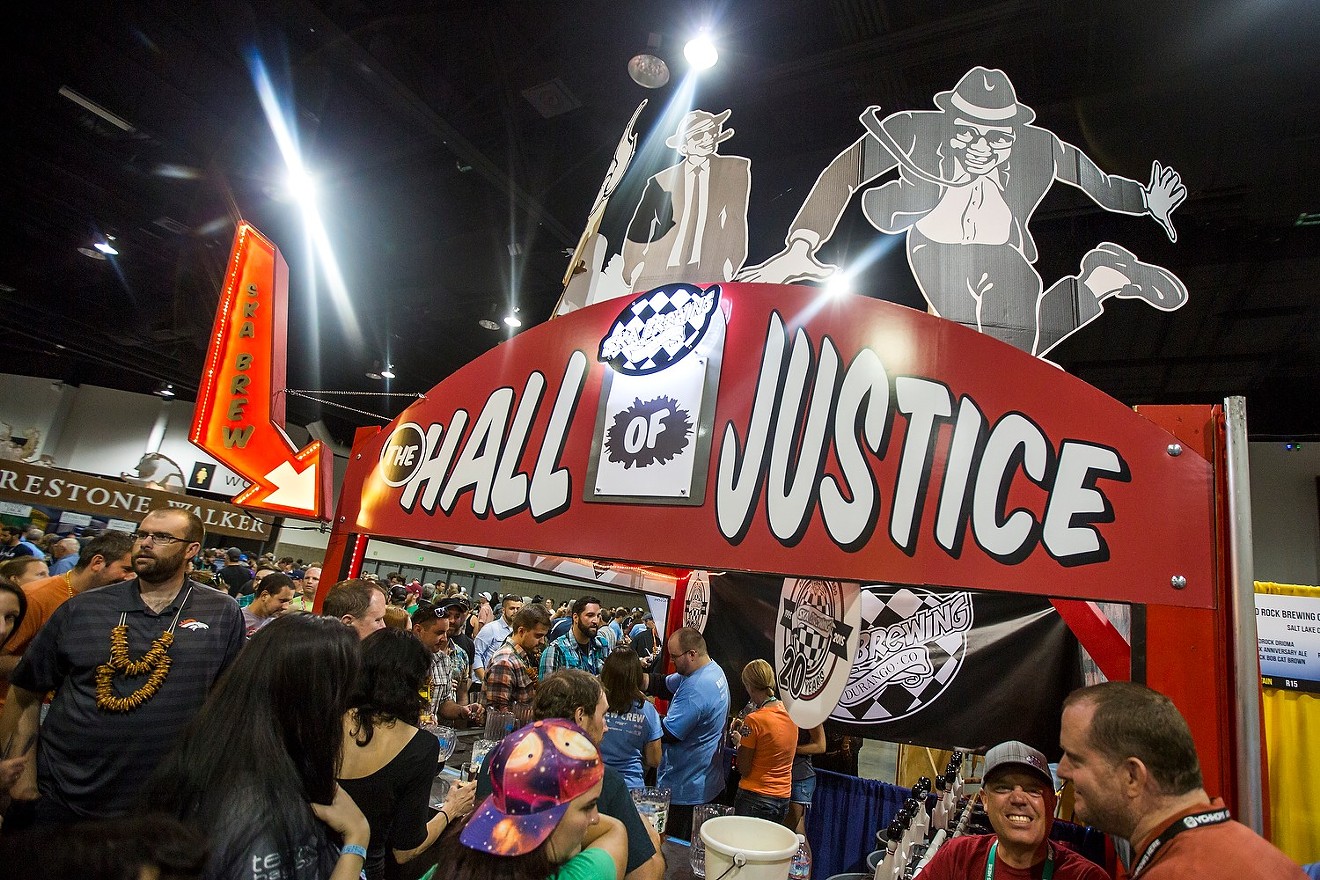 Brandon Marshall/Westword
The Great American Beer Festival, now in its 36th year, has changed drastically over the decades. It has grown significantly in size, while the industry it represents has grown even more. These days, the specifics of the fest itself aren't too different from year to year, but the issues surrounding craft beer are always in flux. For instance, the increasing animosity between the Brewers Association, which hosts the festival, and big beer companies — AB InBev, in particular — is front and center this year, not just on the floor, where the mega-breweries will have a diminished presence, but outside the Colorado Convention Center, where AB InBev has staked out a bar, Stout Street Social, directly across from the entrance to GABF, and installed large banners for its brands. But there are many other interesting things to keep an eye on as well this year. Here are ten of them.

It's not nice to fool with the judges.
Photo © Brewers Association
A Pumpkin Beer With Actual Pumpkin
By refusing to award a gold or silver medal in the pumpkin/squash beer category last year, GABF judges sent a message to breweries that they were coming up short in the category. The reason: Most of the entrees relied on pumpkin spices rather than just real pumpkin, and there is already a category for pumpkin spice. Will things change this year? It's hard to know, because there are only fourteen entries into the pumpkin/squash category. To be honest, it's hard to believe that the BA brought this category back, since it garnered only one medal and almost no interest last year. In the meantime, the BA still refuses to create a category for New England-style IPAs, which would likely attract dozens, if not hundreds, of entries and generate a huge amount of interest and excitement. Politics?

Weldwerks wonders why New England-style IPAs aren't being judged.
Brandon Marshall/Westword
New England-Style IPAs in the Fest, but Not the Competition
And speaking of New England-style IPAs, while many of the nation's best-known purveyors of the style — like Trillium, Treehouse, Alchemist, Other Half, Monkish, Tired Hands, Lawson’s Finest, Carton and Bissell Brothers — won't be pouring beer at the fest, dozens of other breweries will be doing just that. Few of those breweries will actually enter their hazy IPAs into the competition, though, because there is no category for them, and they are unlikely to win in other categories where their appearance and flavor profile don't fit. It's a huge disconnect that the BA has decided not to address for the second year in a row. Some of the booths where you can look for NE-style IPAs include Weldwerks, Odd13, New Image and Epic Brewing, along with many others from out of state. (Just FYI, both Vermont and Rhode Island will have their guilds present, serving a few beers from their states.)

New England breweries, like Lawson's Finest, will be missing from GABF this year.
Lawson's Finest Liquids Facebook page
New England Breweries, on the Other Hand, Are Mostly Missing
While all fifty states will be represented in the competition — according to the BA — two states will be missing from the festival floor: Vermont and Rhode Island. Neither will be represented by a brewery at a booth, which is a big deal, because Vermont is one of the hottest beer states in the country. In fact, the entirety of New England — seven states — will only be sending a total of twenty breweries to GABF, and more than a third are from Massachusetts. What's the problem? Vermont and Maine brewery guild reps say they think it's probably not worth the cost to send beer and employees across the country when they are busy at home.

Danielle Lirette/Westword
End Caps Are All Craft Beer
In previous years, big money meant big sponsorship at the Great American Beer Festival, regardless of where it came from. That meant that Constellation Brands, MillerCoors, AB InBev and their subsidiaries, like Blue Moon, Goose Island or Ballast Point, could score prime spots on the end caps of the long rows of brewery booths. Not anymore. Over the summer, the Brewers Association announced that it would reserve those end caps for breweries that meet the organization's definition of a craft brewer. That means they are small(ish), independent (less than 25 percent owned by an alcohol industry member that is not a craft brewer) and traditional (they use traditional or innovative brewing ingredients). Many craft brewers have grown to the point where they can afford the sponsorships, which helps as well.

Westword file photo
Big Beer Is Mostly Absent
The endcaps aren't the only significant change when it comes to Big Beer and the companies that are owned by the megabrewers. Although AB InBev (the maker of Budweiser) owns ten formerly independent craft breweries, only two of them will be represented in 2017. Budweiser won't be there at all. MillerCoors, meanwhile, has only one table where it will serve its flagships: Coors, Coors Light, Miller High Life, Miller Light and, uh, Hamm's. There's no Blue Moon and no AC Golden, which were longtime fixtures at the fest. Lagunitas won't be there, either. Purchased by Heineken in two phases over the past few years, the brewery has typically had long lines at the fest. It's an interesting new world at GABF, and one that better fits the BA's goals.