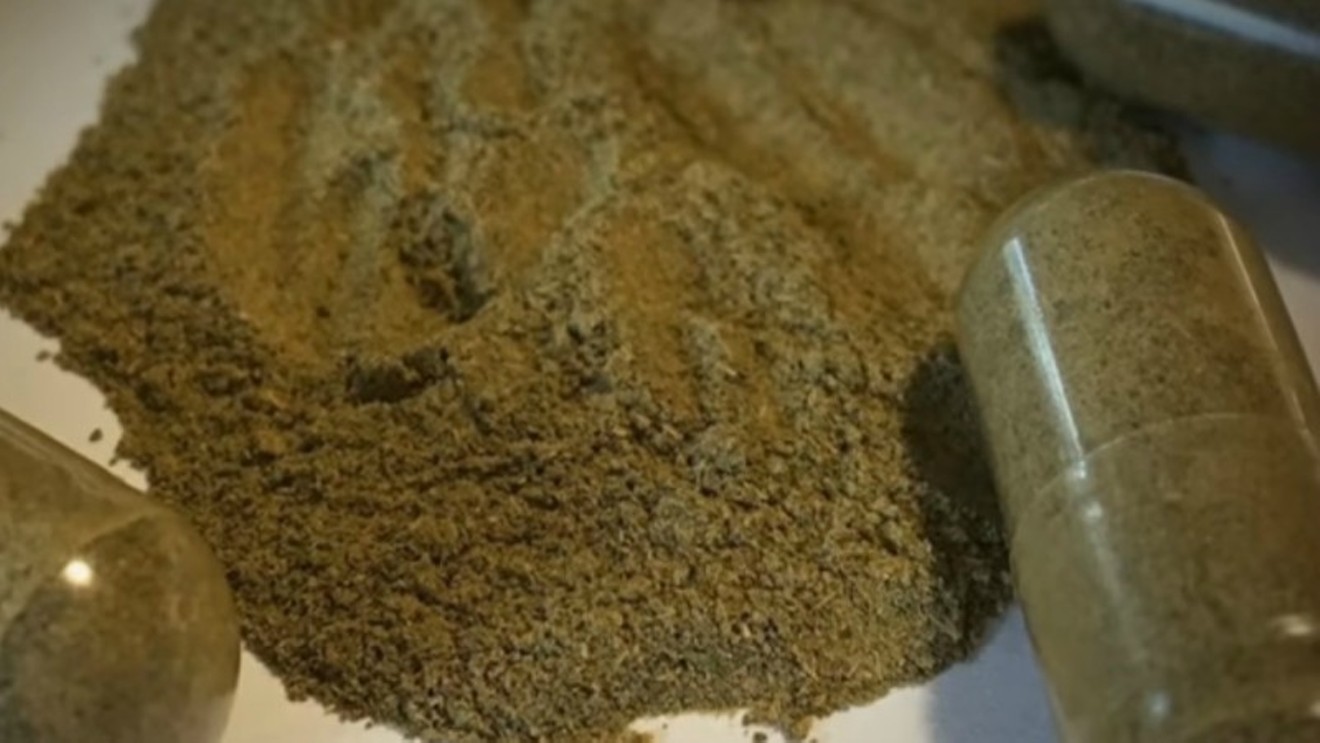 Denver Environmental Health has banned the sale of kratom for human consumption. The decision follows a public-health advisory warning individuals not to consume kratom, a popular herbal substance of Southeast Asian origin that's become more widely available in Colorado over the past few months, issued by the U.S. Food and Drug Administration on November 14. Prior to this alert, reports circulated about more than a dozen deaths associated with, although perhaps not directly attributable to, use of the substance, which is known for its euphoric and pain-relieving effects.

Our Thomas Mitchell wrote about kratom's availability at stores such as Colorado Herbal Imports in Glendale in a July 18 post. Along the way, he reported that "kratom has become a popular remedy for anxiety, chronic pain, opioid-withdrawal symptoms and post-traumatic stress disorder. Some users also consume it as a stimulant... A relative of the coffee plant, kratom is traditionally consumed by chewing its leaves or brewing it into a tea."

Mitchell noted, however, that kratom has not been approved by the U.S. Food and Drug Administration. Additionally, the federal Drug Enforcement Administration took steps to reclassify kratom as a Schedule I narcotic in August 2016 before reversing course earlier this year. The change in approach was undoubtedly influenced by public backlash. Mitchell pointed out that "around 140,000 people signing a White House petition against the DEA's proposal and a group of 51 U.S. senators and representatives [sent] a letter to Chuck Rosenberg, acting head of the DEA."

The feds have continued to view kratom consumption as dangerous, attributing fifteen deaths between 2014 and 2016 to its use. However, Mitchell noted that "fourteen of the people who died had other drugs or illegal substances in their systems. Mitragynine and 7-hydroxymitragynine, the active ingredients in kratom that bind to the same brain receptors as opioids, can cause pain relief and euphoria for users, but studies are limited."

Now, Denver Environmental Health is taking action. The agency isn't banning all sales of kratom, but retailers that wish to peddle it for non-consumptive purposes must affix a consumer advisory "in large font...easily readable to all purchasers" that states: "This product is not intended for human consumption. Consuming kratom products may pose a risk, including death, to consumers and has addictive potential. Increased risk of injury or death may be posed by consuming with alcohol and other drugs." Moreover, sellers won't be allowed to give consumers advice about dosage or consumption. 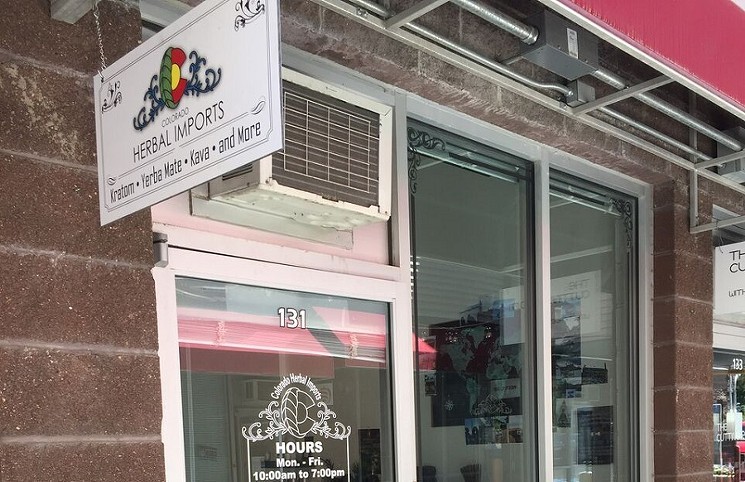 
The FDA is concerned about harmful unapproved products that have been crossing our borders in increasing numbers. The agency has a public health obligation to act when we see people being harmed by unapproved products passed off as treatments and cures for serious conditions.
Over the past several years, a botanical substance known as kratom has raised significant concerns given its increasing prevalence and potential safety risks. Today, the agency issued a public health advisory related to the FDA’s mounting concerns regarding risks associated with the use of kratom.

Kratom is a plant that grows naturally in Thailand, Malaysia, Indonesia and Papua New Guinea. It has gained popularity in the U.S., with some marketers touting it as a “safe” treatment with broad healing properties. Proponents argue that it’s a safe substance largely because it’s a plant-based product. The FDA knows people are using kratom to treat conditions like pain, anxiety and depression, which are serious medical conditions that require proper diagnosis and oversight from a licensed health care provider. We also know that this substance is being actively marketed and distributed for these purposes. Importantly, evidence shows that kratom has similar effects to narcotics like opioids, and carries similar risks of abuse, addiction and in some cases, death. Thus, it’s not surprising that often kratom is taken recreationally by users for its euphoric effects. At a time when we have hit a critical point in the opioid epidemic, the increasing use of kratom as an alternative or adjunct to opioid use is extremely concerning.

It’s very troubling to the FDA that patients believe they can use kratom to treat opioid withdrawal symptoms. The FDA is devoted to expanding the development and use of medical therapy to assist in the treatment of opioid use disorder. However, an important part of our commitment to this effort means making sure patients have access to treatments that are proven to be safe and effective. There is no reliable evidence to support the use of kratom as a treatment for opioid use disorder. Patients addicted to opioids are using kratom without dependable instructions for use and more importantly, without consultation with a licensed health care provider about the product’s dangers, potential side effects or interactions with other drugs.

Given all these considerations, we must ask ourselves whether the use of kratom – for recreation, pain or other reasons – could expand the opioid epidemic. Alternatively, if proponents are right and kratom can be used to help treat opioid addiction, patients deserve to have clear, reliable evidence of these benefits.

I understand that there’s a lot of interest in the possibility for kratom to be used as a potential therapy for a range of disorders. But the FDA has a science-based obligation that supersedes popular trends and relies on evidence. The FDA has a well-developed process for evaluating botanical drug products where parties seek to make therapeutic claims and is committed to facilitating development of botanical products than can help improve people’s health. We have issued guidance on the proper development of botanical drug products. The agency also has a team of medical reviewers in the FDA’s Center for Drug Evaluation and Research that’s dedicated to the proper development of drug applications for botanicals. To date, no marketer has sought to properly develop a drug that includes kratom.

We believe using the FDA’s proven drug review process would provide for a much-needed discussion among all stakeholders. Until then, I want to be clear on one fact: there are currently no FDA-approved therapeutic uses of kratom. Moreover, the FDA has evidence to show that there are significant safety issues associated with its use. Before it can be legally marketed for therapeutic uses in the U.S., kratom’s risks and benefits must be evaluated as part of the regulatory process for drugs that Congress has entrusted the FDA with. Moreover, Congress has also established a specific set of review protocols for scheduling decisions concerning substances like kratom. This is especially relevant given the public’s perception that it can be a safe alternative to prescription opioids.

The FDA has exercised jurisdiction over kratom as an unapproved drug, and has also taken action against kratom-containing dietary supplements. To fulfill our public health obligations, we have identified kratom products on two import alerts and we are working to actively prevent shipments of kratom from entering the U.S. At international mail facilities, the FDA has detained hundreds of shipments of kratom. We’ve used our authority to conduct seizures and to oversee the voluntary destruction of kratom products. We’re also working with our federal partners to address the risks posed by these imports. In response to a request from the Drug Enforcement Administration (DEA), the FDA has conducted a comprehensive scientific and medical evaluation of two compounds found in kratom. Kratom is already a controlled substance in 16 countries, including two of its native countries of origin, Thailand and Malaysia, as well as Australia, Sweden and Germany. Kratom is also banned in several states, specifically Alabama, Arkansas, Indiana, Tennessee and Wisconsin and several others have pending legislation to ban it.

We’ve learned a tragic lesson from the opioid crisis: that we must pay early attention to the potential for new products to cause addiction and we must take strong, decisive measures to intervene. From the outset, the FDA must use its authority to protect the public from addictive substances like kratom, both as part of our commitment to stemming the opioid epidemic and preventing another from taking hold.

As a physician and FDA Commissioner, I stand committed to doing my part to prevent illegal substances that pose a threat to public health from taking their grip on Americans. While we remain open to the potential medicinal uses of kratom, those uses must be backed by sound-science and weighed appropriately against the potential for abuse. They must be put through a proper evaluative process that involves the DEA and the FDA. To those who believe in the proposed medicinal uses of kratom, I encourage you to conduct the research that will help us better understand kratom’s risk and benefit profile, so that well studied and potentially beneficial products can be considered. In the meantime, based on the weight of the evidence, the FDA will continue to take action on these products in order to protect public health.

The FDA, an agency within the U.S. Department of Health and Human Services, protects the public health by assuring the safety, effectiveness, and security of human and veterinary drugs, vaccines and other biological products for human use, and medical devices. The agency also is responsible for the safety and security of our nation’s food supply, cosmetics, dietary supplements, products that give off electronic radiation, and for regulating tobacco products.