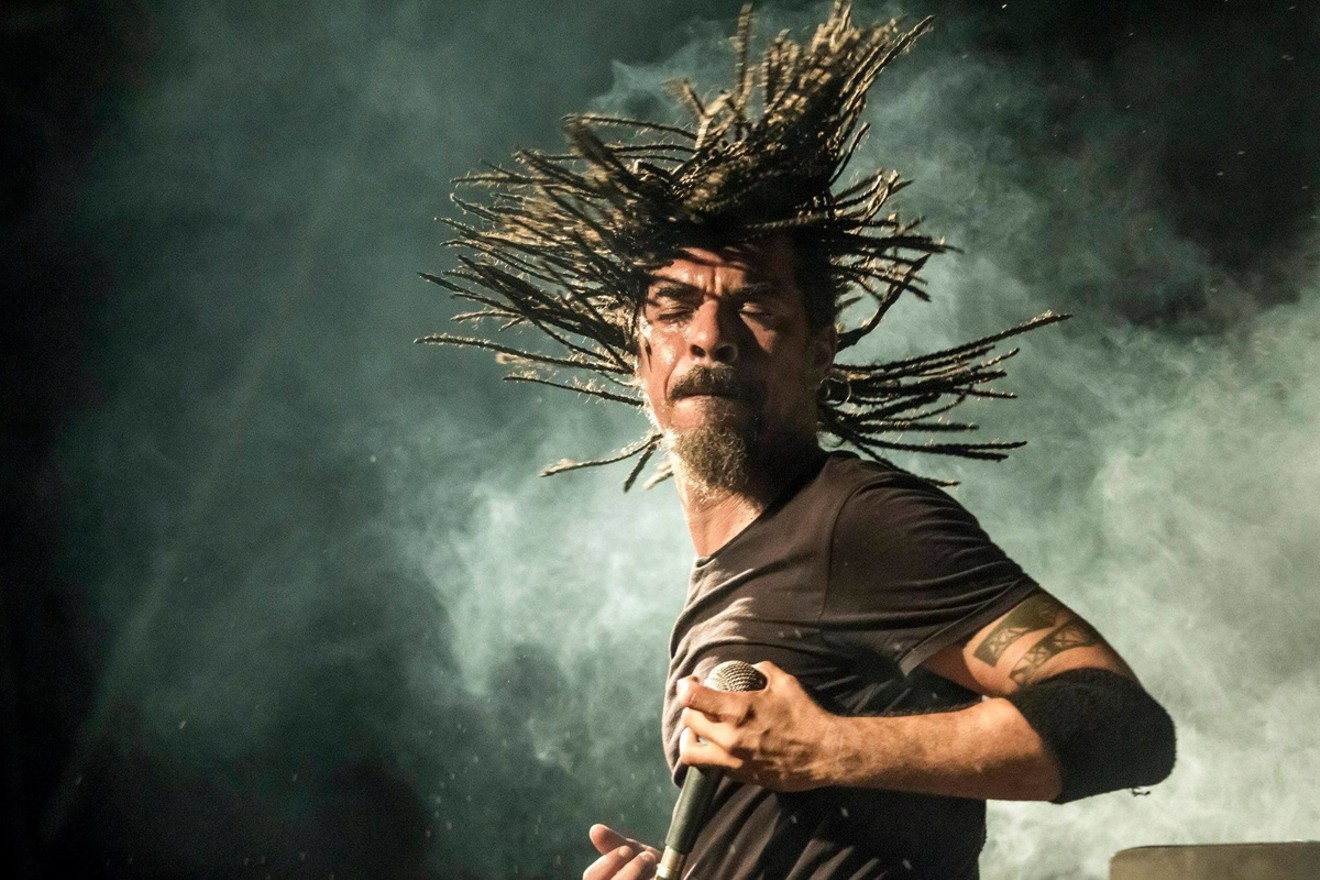 X Alfonso at Havana Nights, which caps the Biennial of the Americas. Courtesy Visit Denver
Start your engines: You're going to need to move fast to get to all the big events in Denver this week.The seventh edition of CRUSH kicked off on Monday, September 11, in RiNo, where it will continue through September 17; the Biennial of the Americas revs up on Tuesday, September 12, and ends with a great free party celebrating Havana. And in between? There's plenty more to do; keep reading for the 21 best events this week.

A celebration of the Western Hemisphere, the Biennial of the Americas is back as a series of symposia and speakers with a civic-minded bent, cultural events and satellite art exhibits, and will present leaders from more than twenty countries around the Americas. Because it’s still a beast to navigate, this year’s Biennial, which runs Tuesday, September 12, through Saturday, September 16, has been divided into tracks and packages to suit your personal interests and time constraints, including a daily Lunch and Learn series. Or if you’re seeking culture, look no further than MCA Denver, which will host an opening for Saber Acomodar: Art and Workshops of Jalisco 1915-Now from 6 to 11 p.m. Wednesday, September 13, or party down at Havana Nights, a two-night warehouse bash of Cuban music, dance and art on the evenings of September 15 and 16. Explore your 2017 Biennial options and chart your course at biennialoftheamericas.org.

Gayla Lemke, "Hope Stones."
Courtesy of Arvada Center
Get ready for a mind-blowing ride: Rocky Mountain College of Art + Design’s Visiting Artist, Scholar and Designer Program Series begins a new season on the twisted theme of “Collapsing Time.” First up on the roster is innovative Los Angeles artist David Horvitz, whose work often crosses boundaries in the virtual world. His lecture,“Nautical Dusk,” will touch on the idea of the “alternative minute” and his works "Distance of a Day" and "Evidence of a Time Traveler," both of which traverse time zones and skew our perceptions of the here and now. Trip through time with Horvitz at 6:30 p.m. Tuesday, September 12, in the Mary Harris Auditorium at RMCAD, 1600 Pierce Street in Lakewood. Admission is free, but an RSVP is required at vasd.rmcad.edu.

Twenty years after Colorado’s Jim Fergus published the award-winning One Thousand White Women, a novel based on the Grant administration’s actual Brides for Indians program, which proposed taming the West by marrying off the country’s excess white women to tribal members, Fergus is releasing a sequel, The Vengeance of Mothers. Booklist calls it “a history lesson infused with both sadness against the violence perpetuated against the Cheyenne and awe at the endurance of this remarkable group of women.” At 7 p.m. Wednesday, September 13, Fergus will be at the Tattered Cover, 2526 East Colfax Avenue, for a reading from the journals of Margaret Kelly and Molly McGill, and to sign and discuss his new book (turns out it’s the second in what will be a trilogy). Admission is free; find out more at tatteredcover.com.

The DocuWest Film Festival returns this year in a new home: the Alamo Drafthouse in Sloan’s Lake. The location may have changed, but the fest’s focus — to captivate audiences through engaging documentaries — remains. The five-day festival kicks off at 7 p.m. on Wednesday, September 13, with a free one-hour preview of The Vietnam War, a new eighteen-hour documentary series by Ken Burns and Lynn Novick that tells the “epic story of one of the most consequential, divisive, and controversial events in American history as it has never before been told on film.” A panel discussion on healing from PTSD will follow. Find more information and a full festival lineup at docuwestfest.com. Perpetually bustling with travelers, shoppers and diners, Union Station’s Wynkoop Plaza, 1701 Wynkoop Street, has become a welcome mat for all of Denver, a destination even for people who don’t have a train to catch. A key element of its success is an events calendar packed with diversions, including Ping Pong on the Plaza on Thursday, September 14. Doors open at 3 p.m. and the party runs until 8 p.m.; the tournament starts at 5:30 for teams of up to four players (two active and two alternates) vying for the title of Wynkoop Plaza Champion in an elimination-style contest. There will be craft beverages and appetizers along with live music and a costume contest complementing the tableside action. Team entry is $150, individual tickets are $40, and $100 gets you VIP access. Proceeds benefit the IMA Foundation, which helps nonprofit organizations improve their communities. Visit imafg.com/PingPong to learn more and register.

War never seems to go out of business; while we fret over the threat of increased conflicts in North Korea and Afghanistan, images of earlier conflicts stick with us, whether presented in such great paintings as Goya’s “The Third of May” and Picasso’s “Guernica” or in the powerful photography of Robert Capa, Margaret Bourke-White, Sebastião Salgado and countless others. Two timely new exhibits — a large group show, Art and Conflict, with views of war by Colorado artists, and a vintage propaganda/poster show, The Great War: Visions of a World Conflict — both open with a reception from 6 to 9 p.m. on Thursday, September 14, at the Arvada Center, 6901 Wadsworth Boulevard. The exhibits will be there through November 12; the center will host an artist meet-and-greet and lecture on war-inspired art through history on Saturday, October 28. All events are free; learn more at arvadacenter.org. 

Phantom Circus gets a leg up on the competition.
Courtesy Phantom Circus LLC
The acrobatic arts will get twisted both on and above the stage of the Oriental Theater when Denver-based Phantom Circus opens its second season with a bevy of aerialists, acrobats, hoopers, hand-balancers and belly dancers. And at this circus, with the advance purchase of a drink ticket at the bar, you can even get an intermission libation poured by an upside-down chandelier aerialist. The nevertheless family-friendly extravaganza runs from 8 to 11 p.m. Thursday, September 14. Tickets start at $12 and $25 in advance at theorientaltheater.com and rise to $15 and $30 at the door of the Oriental, 4335 West 44th Avenue; a $50 VIP option, also available online, includes reserved seating, goodie bags and other perks. Learn
more at phantomcircus.com.

Regan Rosburg hopped onto the Biennial of the Americas bandwagon to curate Axis Mundi: Environmental Melancholia, Collective Social Mania, and Biophilia, an expansion of the artist’s own previous ecological-statement works and a multi-leveled satellite event in itself. Axis Mundi kicks off with a screening of Albatross, a film by Chris Jordan that meticulously examines the grim life and death of birds on Midway Atoll in the Pacific, at 7 p.m. Thursday, September 14, at the Sie FilmCenter, 2510 East Colfax Avenue. Then the three-part Axis Mundi show opens with a reception from 6 to 9 p.m. Saturday, September 16, in a trio of Curtis Park locations — PlatteForum, 2400 Curtis Street; the Olympic Building, 2565 Curtis Street; and the Land Library, 2612 Champa Street — where the works will be displayed through October 7. All events are free, but advance reservations for the film are required at eventbrite.com. For more information, visit axismundiartistsrespond.wordpress.com. 

The Greenway Foundation is dedicated to protecting and enhancing the South Platte River and its tributaries. One of the foundation’s major fundraisers, the annual Noble Energy Gala on the Bridge, will take over the 19th Street Pedestrian Bridge at 19th and Platte streets on Thursday, September 14. While the gala is sold out, there’s a follow-up party on the bridge that promises even more fun: On Friday, September 15, you can join the Blue Moon After Party on the Bridge from 6 to 11 p.m. For $90 (or $100 at the entrance), you’ll enjoy cocktails, live music, a silent disco and food from Fogo de Chão along with several food trucks, all while the Platte rushes beneath your feet. For more information and to purchase tickets, visit thegreenway foundation.org.

At ten years and counting, India’s ZEE Jaipur Festival bills itself as the world’s largest free literature festival, and it has inspired offshoots around the world, including one in Boulder that launched in 2015. The 2017 edition runs from Friday, September 15, through Sunday, September 17, at the Boulder Public Library, 1001 Arapahoe Avenue; the lineup includes Suki Kim, who has written about going undercover in North Korea; Boston Globe Spotlight team member Michael Rezendes, who will speak about the changing landscape for journalists; and Vikas Swarup, author of the novel Slumdog Millionaire. As at the original festival, all programs are free; for more information and to register, go to jaipurliteraturefestival.org/boulder/program. 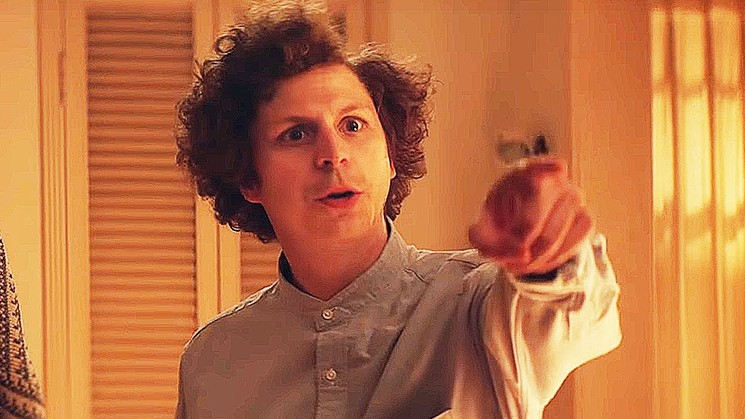 Michael Cera is the focus of a Very Cera September.
Lemon
Boedecker Theater’s Friday Night Weird film screenings returned this month with a Very Cera September, a series dedicated to that wispy icon of millennial awkwardness, actor Michael Cera. Over the course of five films, cineastes will sample every era of Cera, from his star-making comedic turns to some of the most decidedly outré titles in his filmography. The month-long affair continues at 8:45 p.m. Friday, September 15, with the Boedecker premiere of the absurd 2017 indie comedy Lemon, in which Cera plays against type as an arrogantly twee student in leading man Brett Gelman’s Chekhov class; there are additional showings at 6:30 p.m. on Saturday, September 16, and 6 p.m. on Sunday, September 17. The Cera series continues with a screening of Crystal Fairy & the Magical Cactus on September 22 and Youth in Revolt on September 29. Get tickets, $8 to $11, and information at tickets.thedairy.org. 

Now in its fifth year, the Americas Latino Eco Festival will pack a powerful punch in its 2017 iteration, bringing together Latin-American thinkers and artists for three days of events and presentations, from an environmental film series to a U.S. Forest Service-led interactive bioblitz for fourth-graders. The fest also includes a green expo, a Colorado River summit, family-day performances and planetarium shows. ALEF runs Friday, September 15, through Sunday, September 17, at the Denver Museum of Nature & Science, 2001 Colorado Boulevard; event admission ranges from free to $120. For more information and tickets, visit americaslatinoecofestival.org.

Though travel by Americans to Cuba isn’t impossible, the Communist island still bears the stigma of forbidden fruit. But now the allure of new Havana — its emerging music, dance, art and culture — is coming to Denver, at least for a weekend, thanks to the Biennial of the Americas’ Havana Nights. Cuban hip-hop musician X Alfonso, founder and curator of the Fábrica de Arte Cubano (Cuban Art Factory), a hip multi-disciplinary warehouse space in Havana’s primary arts and entertainment district, will headline a concert that includes salsa sensation Issac Delgado, the Acosta Danza dance company and more live music; food trucks will keep the audience fueled. The party starts at 7:30 p.m. Friday, September 15, and repeats at the same time Saturday, September 16, at Denver Rock Drill, a mixed-use redevelopment site at 1717 East 39th Avenue in the Cole neighborhood. Admission is free; register in advance at eventbrite.com.