Wolf Den Combines Tattoos With a Gallery — and a New Attitude Ryane Rose is ready to make a mark on Denver with the Wolf Den, a new tattoo parlor at 6640 East Colfax Avenue that uses vegan products, hires only women as full-time employees, runs an art gallery and is owned by a nonbinary person.

That's Rose, who uses the pronouns they/them and wants to create an environment where everyone can feel comfortable and all artists are respected.

“Artists in different mediums haven’t had the chance to be as lucrative as body artists,” Rose explains, pointing to how saturated Denver is with visual artists, and the fierce competition to get work shown in galleries. “I think [tattooing] is kind of a lateral movement to therapy. ... The other artistic mediums don’t always get that advantage, so I think it’s beautiful to showcase them and join forces.”

The Wolf Den's atmosphere is diametrically opposed to that of the stereotypical macho tattoo parlor. Customers enter into an art gallery with a comfortable green couch and dainty tables topped with candles. One open spot on the wall is reserved for a photo of finished tattoos, making body art a part of the gallery. From there, a sleek glass door leads into the parlor, where three walls are painted forest green and the fourth is covered with wallpaper depicting a misty forest landscape. Softly glowing neon signs read “All Female Studio,” “Do What You Love” and “We Aren’t Sheep.” Calming music fills the space, which is festooned with houseplants. If it weren’t for the tattoo chairs and gear, the studio could pass for a bohemian massage parlor.
click to enlarge 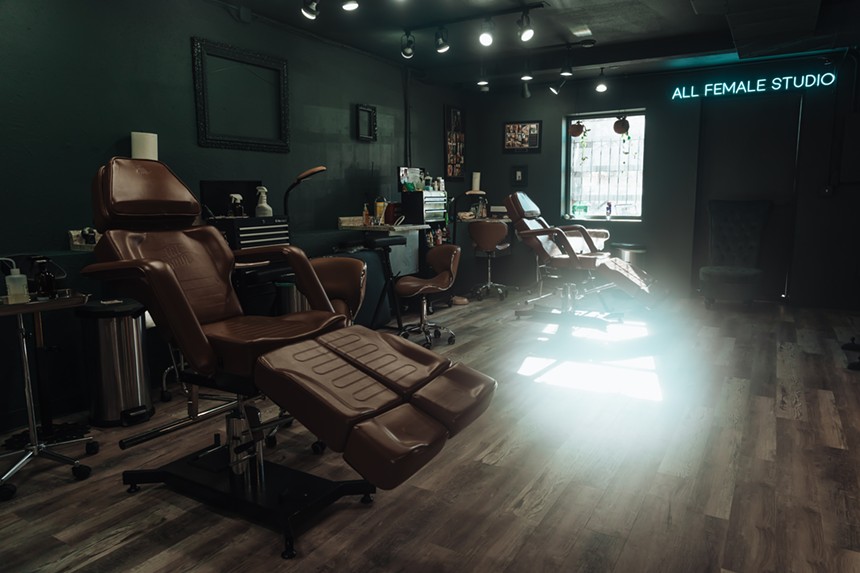 Wolf Den has a calming atmosphere meant to promote a safe space.
Courtesy of Ryane Rose

“We’re a queer, family-run business, and we’ve both had struggles with coming into our own identity at different points in our lives. So we have this background of a strong family-owned business, and also we just get it — we get what it means to create a safe space,” says Jess Rose, Rose’s spouse, who runs the gallery and schedules appointments as the “den mom.” 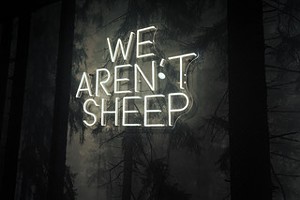 An LED sign hangs in the parlor.
Courtesy of Ryane Rose

“I can’t tell you how many humans who are coming through this door who are nonbinary, trans, who need a safe space and really only feel safe here, just by having a shop owner who's nonbinary and everyone else that’s in the shop is female," Jess continues. “Even the heterosexual white cis males who are coming in here feel really safe and respected, and they’re blown away by the shift in energy versus a lot of other shops around town, which I think is amazing."

“I feel like when I get the men in here — and most of my clients are actually men — they feel like they don’t have to butch up," Rose adds. "It’s really cute: They can be like, ‘I’m struggling. What does my masculinity look like because I’m a stay-at-home dad?’ I don’t feel like I would have ever had these kinds of conversations at the street shops I’ve worked at.”

Now that the parlor is off the ground, Rose and Jess are looking forward to the grand opening of the gallery, a private event on New Year’s Eve. After that, the art will rotate bi-monthly with an opening party for the new show; the gallery is already booked through 2022. Rose is excited to collaborate with the featured gallery artists and create tattoos that correspond to the original art.

“I’m going to sit down with them and see if they can turn some of their art into flash, and what that would look like,” Rose says. “During their gallery opening, I’m going to do their flash — so if you can’t afford a $5,000 piece of art, you can take a $50 one that’s still embodying that person’s art.”

Although this is a female-focused shop, male artists will be shown in the gallery; the work at the grand opening will include pieces by Michael Escobedo and Matt Verges, among others. “We want a space for everyone,” Jess says. The artists already on display include Michael Vacchiano and Annie Decamp, as well as a painting by Rose that “is too big for my house right now,” they say.

The Wolf Den has received more than 100 applications for apprenticeships, and will foster tattoo artists with diverse talent, "so we can take whoever walks through the door," Rose says. "I’m so proud to work next to these women. I feel like when we’re all working, it’s like we’re this pack, this wolf pack." 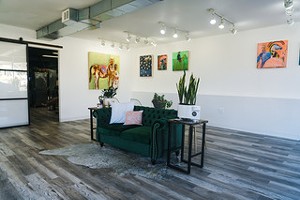 The gallery at the Wolf Den.
Courtesy of Ryane Rose

Rose, who grew up in Arvada, recalls that tattoo culture in the past was “really aggressive. … It’s still a hard barrier that I’m gently trying to break," they say. "The mentality was, ‘If you take this client from me, then you’re taking food from me.’

"No, there’s enough for everyone," they continue. “That’s why I named this the Wolf Den. We will all eat if we work together. We’ll eat more, we’ll eat better, we’ll eat more frequently.”

Rose opened the first Wolf Den in Arvada in 2017; it has a sister shop, a woman-owned facility in Reykjavík, Iceland. Rose has held tattooing residencies at that shop as well as in Sydney, Australia, and throughout the U.S.; a residency in Paris is on the schedule for next year, provided the pandemic holds off.

"You still have to respect those who laid the ground for you, but you don’t have to be like they were," Rose concludes. "So we’re finding a little more maturity and openness. We’re not all the way there yet, but we’re trying.”

The Wolf Den is located at 6640 East Colfax Avenue; for more information, visit its website.
KEEP WESTWORD FREE... Since we started Westword, it has been defined as the free, independent voice of Denver, and we'd like to keep it that way. With local media under siege, it's more important than ever for us to rally support behind funding our local journalism. You can help by participating in our "I Support" program, allowing us to keep offering readers access to our incisive coverage of local news, food and culture with no paywalls.
Make a one-time donation today for as little as $1.
Emily Ferguson is Westword's Culture Editor, covering Denver's flourishing arts and music scene. Before landing this position, she worked as an editor at local and national political publications and held some odd jobs suited to her odd personality, including selling grilled cheese sandwiches at music festivals and performing with fire. Emily also writes on the arts for the Wall Street Journal and is an oil painter in her free time.
Contact: Emily Ferguson