Back Taxes Shut Down Buddy Boy Dispensaries Before Planned Closure All seven Buddy Boy locations were closed as of last week. Thomas Mitchell
Buddy Boy had announced it was closing its stores on Friday, June 17, but the City of Denver actually shut the marijuana chain's doors days earlier.

Notices posted on all seven Buddy Boy stores announce that the dispensaries were closed by the Denver Department of Finance for unpaid taxes. According to Denver Treasurer Steve Ellington, the business owes the City of Denver around $500,000 for failing to pay or properly report sales taxes.

Buddy Boy had notified employees earlier this month that the company had planned to close up shop; in an interview with Westword, majority owner John Fritzel pointed to poor marijuana sales and dropping prices as the reasons.

According to Ellington, the city was unaware of Buddy Boy's plans until a Westword article announced the company's upcoming shutdown. After learning of those plans, the Department of Finance posted distraint warrants and notices of closure on the doors of all Buddy Boy stores.

"We were in discussions with Buddy Boy related to some delinquent tax returns, and then we saw a media report indicating they were closing their locations. So we expedited the process," Ellington says. "The goal here is to continue to work with the business."

The city is "still working with" Buddy Boy to determine the exact amount of tax payments owed, but Ellington estimates it's around $500,000 and dates back "several months." There are no hearings or penalties currently planned for Buddy Boy, he adds.

Confirming the tax issues, Fritzel again points to poor sales as the primary reason Buddy Boy decided to close. He says he was aware that money was owed the city, but didn't expect a full-on shutdown.

"We definitely owe the city some cash. Sales were the still main reason, but that was among a whole laundry list of reasons of why we closed," Fritzel says. "We were completely unaware of [the distraint warrants], but we've got a plan. We're working with all of the entities to get current."

Fritzel acknowledges that Buddy Boy likely owes the Colorado Department of Revenue some money, too, but he thinks it will be a much smaller amount. The marijuana branch of the DOR, the state Marijuana Enforcement Division, "hasn’t taken any action at this time," according to spokeswoman Shannon Gray, but is working with Buddy Boy and the City of Denver "to monitor the situation." 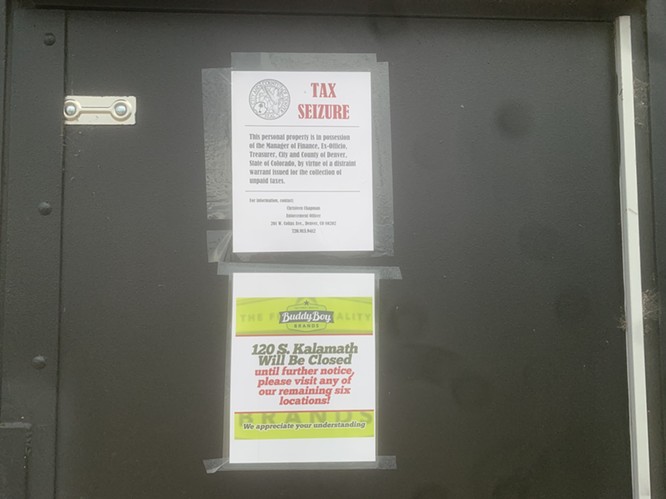 A distraint warrant posted at Buddy Boy's former store at 120 South Kalamath Street.
Thomas Mitchell
Fritzel wants to sell the marijuana dispensary licenses for his seven Buddy Boy stores; according to Denver Department of Excise and Licenses communication director Eric Escudero, whether the company will be able to sell those licenses will be determined after Buddy Boy files an application to transfer them to another entity.

If the city wants to be paid, Fritzel — who previously said that "vultures are already circling" to buy his dispensary licenses — argues that allowing Buddy Boy to sell its licenses would make that happen much sooner. And it's not just the city that is owed money, he notes.

"We've got active sales contracts. Selling one store should be able to pay for all of this and then some. If their main concern is to get paid, that would be no problem," he says. "The goal here is to definitively satisfy what we owe, same for our landlords and vendors. Our goal is to get that taken care of, and in order to do that, we need to move those licenses."

Fritzel is also an owner of Lightshade, a chain of eleven dispensaries operating in Aurora, Denver and Federal Heights, as well as Denver medical dispensary PotCo. He maintains that neither the Buddy Boy closures nor recent tax news affects those businesses.

Medical marijuana sales are taxed 2.9 percent, the standard sales tax on goods and services in Colorado. However, recreational marijuana sales have their own set of special state and local taxes, which total 26.41 percent in Denver.

According to Ellington, tax payment issues are no more common among marijuana businesses than in other industries, but Fritzel says he believes that decreasing revenue and high tax payments will force more businesses to scale black or shut down completely. Earlier this week, wholesale grower Veritas Fine Cannabis laid off almost a quarter of its staff after closing one of its three cultivation facilities, while Pure Greens and Bonfire dispensaries each closed a location in Denver.

Colorado dispensaries broke marijuana sales records in 2021, bringing in over $2.2 billion. Sales volume and wholesale marijuana prices began falling last summer, however. April 2022 was the eleventh straight month of falling dispensary sales on a year-over-year basis, while the price of wholesale marijuana flower fell almost 60 percent on average since January of last year, according to MED data.
KEEP WESTWORD FREE... Since we started Westword, it has been defined as the free, independent voice of Denver, and we'd like to keep it that way. With local media under siege, it's more important than ever for us to rally support behind funding our local journalism. You can help by participating in our "I Support" program, allowing us to keep offering readers access to our incisive coverage of local news, food and culture with no paywalls.
Make a one-time donation today for as little as $1.