Denver Marijuana Lounges, Classes and Other Places to Smoke Weed on 4/20 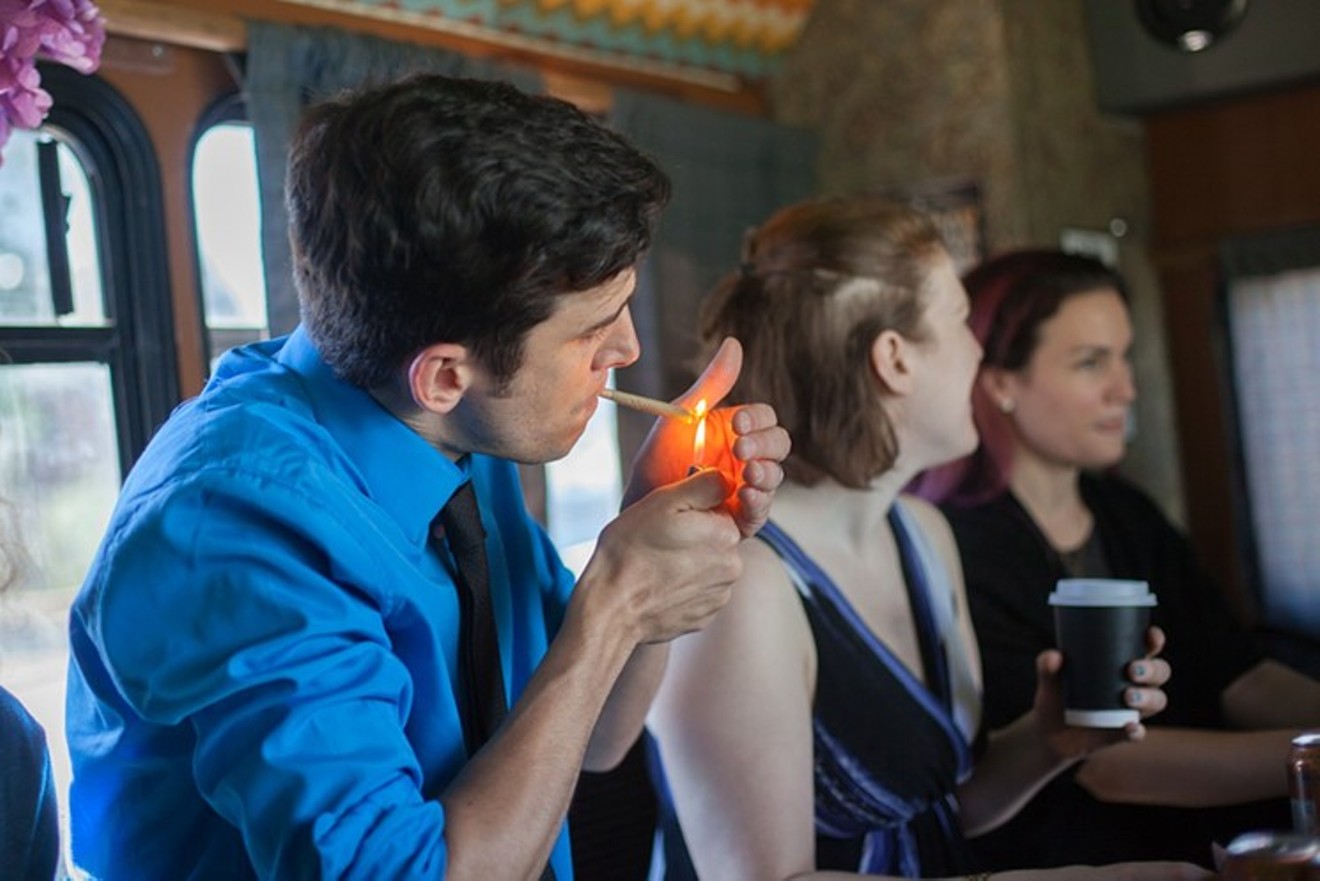 Looking for somewhere to smoke in a friendly environment on 4/20? The Denver area has a handful of options. Jacqueline Collins
The unofficial marijuana holiday, 4/20, is almost here, and Denver has dozens of pot-centric events going on throughout the week, including the annual pilgrimage to Civic Center Park.

The Mile High 420 Festival is free to attend and promises to be a smoke-filled show with thousands of attendees. But for something smaller — and possibly more legal — without losing the social touch on 4/20, there are a handful of lounges, classes and tour companies that allow marijuana consumption, including three fully licensed and public pot clubs (21+).

A handful of other businesses have also figured out ways to bring cannabis hospitality without technically running afoul of the law — at least in their eyes. The City of Denver might dispute that every once in a while with the owners, but guests are generally left alone.

Here are ten Denver-area venues or tour companies that will allow marijuana consumption on 4/20.

The Coffee Joint
1130 Yuma Court
720-583-4657
The Coffee Joint made history as Denver's first licensed cannabis-consumption business. The coffee shop and lounge, which opened for social pot use in 2019, allows electronic vaping of flower and concentrates as well as edibles consumption, as long as you BYOCannabis. Although you can't smoke here, you can use your own vapes and dab rigs for the Coffee Joint's e-nails, and the $5 entrance fee is waived if you've purchased products from the dispensary next door, 1136 Yuma. The Coffee Joint is planning a day full of pot-friendly events on 4/20, including coffee and doughnuts, yoga, painting and a fundraiser for Ukrainian refugees.

Tetra Lounge
3039 Walnut Street
720-800-3011
Tetra operated under the private-membership model from 2018 to this year, allowing you to sign up online for daily memberships and monthly passes. Tetra finally became licensed for social pot use by the state and city in 2022, however, and so will open for public cannabis use on April 20. Like the Coffee Joint, visitors must bring their own cannabis, but you're allowed to smoke inside and in the backyard. The daily entrance is a little more expensive than at other pot clubs, but Tetra is in the heart of RiNo, regularly hosts live music, industry gatherings and 420-friendly classes over the weekend. Unfortunately, Tetra's city inspections were stalled, and the owner now expects to open the lounge on April 22. 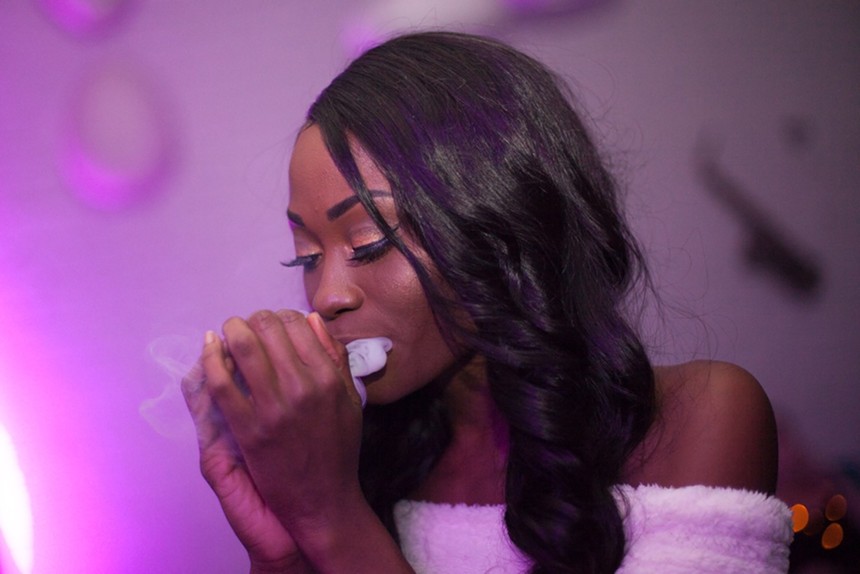 Tetra Lounge has been operating as a private marijuana club since 2018, but will open to the public on April 20.
Jacqueline Collins
JAD's Mile High Smoke
7667 Washington Street
The first joint of its kind in Colorado, JAD's Mile High Smoke has a hospitality and micro-sales license that enables the lounge to sell limited amounts of marijuana flower, concentrate and edibles to patrons, who can consume the products inside or on a private backyard patio — pretty much like a bar, but for weed (alcohol sales are banned at licensed pot hospitality spaces). Marijuana consumption devices, such as pipes, bongs, vaporizers and joint papers, are also available for rent or purchase, while owner Joshua Davis plans to bring in food trucks and live entertainment. Unfortunately, Davis says JAD's is experiencing a roofing issue, and won't be open until Friday, April 22.

Bodega
1270 West Cedar Avenue
720-475-1983
This cannabis speakeasy is modeled after an East Coast corner market, with a fake soda machine serving as the secret entrance to a glossy pot lounge with booths and flat-screen TVs. Not everyone can get into the secret part of Bodega, though. See if you're cool enough for a membership (21+), and maybe you can hang out and puff — and buy some hot Cheetos on the way in.

The International Church of Cannabis
400 South Logan Street
303-800-5644
Despite its name, the International Church of Cannabis only allows cannabis consumption on site during its Sunday congregational gatherings, weddings (it is a church, after all, and a beautiful one at that) or private events, including a private 4/20 party this year for members. The Sunday evening ceremonies celebrate Elevationism, the practicing faith at the church, with members receiving invites every week after they sign up online. On top of allowing occasional cannabis use (bring your own), the church offers educational talks, live entertainment and potluck dinners. To become a member and attend church functions, you just need to be 21 or older, and sign up. 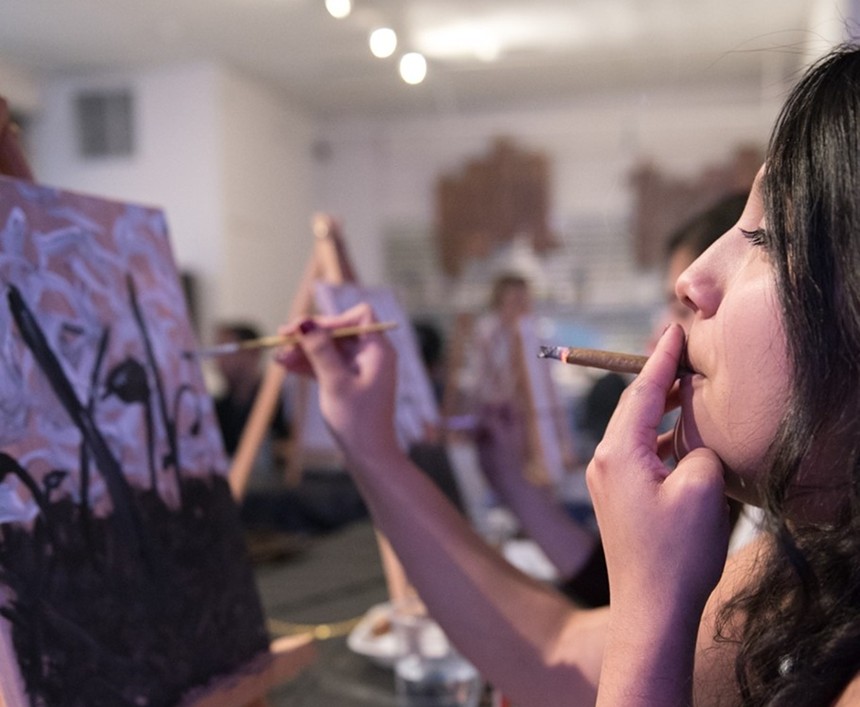 Puff and paint during a marijuana-friendly art class.
Jake Cox
Studio420
808 East 78th Avenue
303-781-4642
Studio420 follows the private-club model, with members expected to bring their own marijuana. This north Denver pot haven doubles as a glassware and tobacco shop; membership is $10 per day and $20 per month. The club also operates the 420 Tour Bus, a mobile cannabis lounge available for events and private use.

Kush & Canvases
Aurora and Denver locations shared after registration
720-840-7576
Kush & Canvases is a cannabis-friendly panting class held on Fridays, Saturdays and Sundays in a private Denver studio, with guests paying a fee for art supplies and professional instruction — and the right to puff and sip as they paint (bring your own party supplies). Kush & Canvases ownership also operates a sushi- and joint-rolling class and a marijuana and mimosa brunch, but the plan for 4/20 is music-centric painting throughout the day.

Boulder Adventure Lodge
91 Fourmile Canyon Drive, Boulder
303-444-0882
All right, so Boulder is a short drive from Denver, but the trip will be worth it given all the outdoor fun available at Boulder Adventure Lodge. A pot-friendly cabin and camping area that also has a slackline park, nearby creek and regular group hikes, rock-climbing sessions and more, Boulder Adventure Lodge is known for its Colorado-centric activities, including cannabis. Although there's no smoking indoors, vaporizing is allowed, and there are designated areas outside for smoking cannabis. 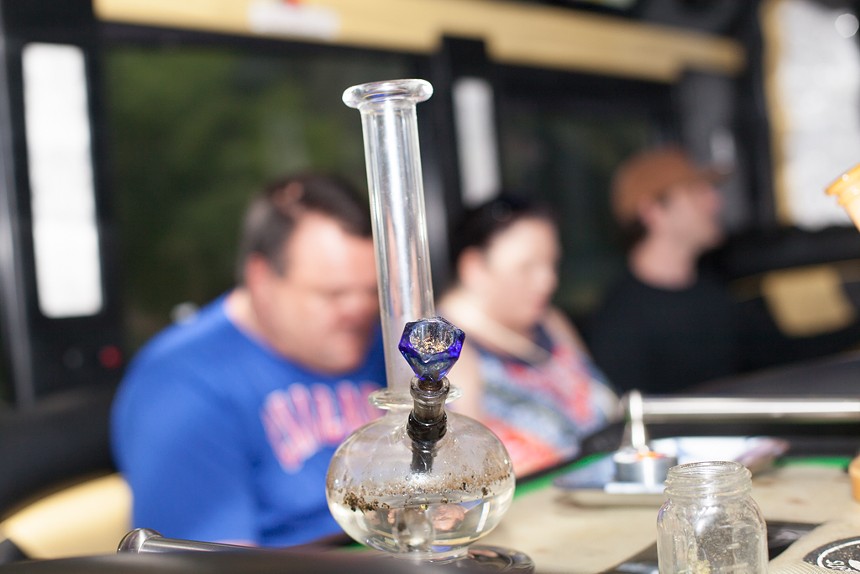 Mairjuana tour companies will allow you to take a mobile toke, too, if you sign up in time.
Jacqueline Collins
Colorado Cannabis Tours
1101 East Bayaud Avenue
303-420-8687
Colorado Cannabis Tours mostly operates out of private buses, taking riders to various activities and tours in the metro area. You just show up to the headquarters after signing up, hop on the bus, toke up (bring your own for the early part of the ride), and then check out dispensaries, cultivations, hash factories, hemp farms and more. If you don't want to be on the road, Colorado Cannabis Tours also hosts pot-friendly classes like Puff, Pass and Paint, Pipemaking 101, Cooking With Cannabis, Cannabis Karaoke and more, with special packages for the week of 4/20, as well.

City Sessions
3377 Blake Street
720-250-8828
This cannabis travel and tour service offers several classes and tours involving cooking, growing operations, Denver sightseeing and more through its cannabis-friendly buses and home-base pot lounge in the city. However, City Sessions also offers more intimate experiences, with private classes for just you and your friends, as well as 420-friendly transportation to and from the airport and several ski resorts.