Marshmallow OG will spark an appetite without killing your ability to speak. Herbert Fuego
Ever wonder why you get so hungry after smoking a joint? Cannabis consumption activates certain receptors in our brains, directing hunger-fighting neurons to switch sides and stimulate our appetites.

Research shows that most generic strains of weed can lube up an appetite, especially for anyone who doesn't toke very often, but there is a rare class of cannabis out there digging endless pits of hunger in our stomachs. If you want to compete with the likes of late-stage Elvis or Jabba the Hutt at your next feast, give these six strains a try.

Limoncello
I rate Limoncello among the better daytime strains I've tried, and would even recommend it for morning use if not for the insatiable munchies it brings. My energy, focus and willingness to deal with the rude and idiotic tendencies of the public are all increased after a few puffs of Limoncello, and the comedown is light, given how much food I eat. If you're in bulking season, give this a shot. (You'll usually find it under its traditional name, Limoncello, but the cannabis crowd isn't the best at spelling, so don't be turned off by "Lemonchello" or "Lemon Cello" at the dispensary.) A handful of extractors are producing vape-able versions, but Cherry is pumping out my favorite Limoncello from here to the old country.

Marshmallow OG
Although strong on the eyes and extremely effective at making my stomach growl, Marshmallow OG's high was never disorienting, and always allowed me a couple of hours of focus and motivation before putting me out for good. Those with lower tolerances are likely to feel those effects sooner, however, given the potency of the Marshmallow OG available in Denver right now. 710 Labs and Natural Remedies, two popular growing operations in Colorado, have both recently dropped Marshmallow OG at dispensaries. Haze, another wholesale cultivation, also grows the strain.

Funyunz
Remember the Droopy cartoon character? Take the dog's eyes, drag them onto your face, and that's you every time after smoking Funyunz. The relaxation isn't immediate, usually taking 30 to 45 minutes to build up before slapping me in the face with a nonstop barrage of yawns, stretching, and longing memories of an empty bed. The physical effects usually end in a nap — but not without a strong bout of the munchies first, so plan your meal and sweatpants accordingly. Cherry and Snaxland both grow prized wholesale versions, while Higher Grade dispensaries offer a stanky in-house take at great value. 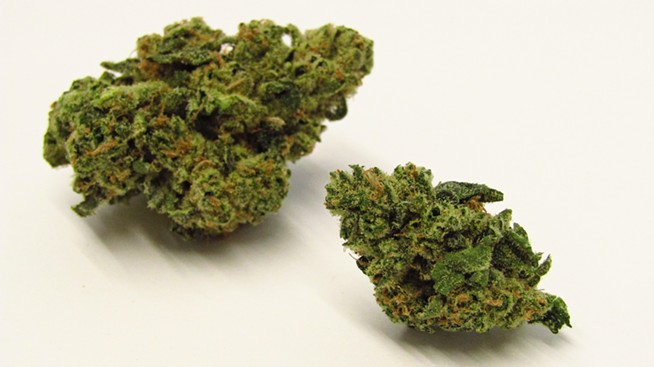 Key Lime Pie is a tasty way to cool down on a hot night.
Herbert Fuego
Key Lime Pie
I was skeptical of the rush of pastry strains five years ago, and smoking something that barely replicated its namesake was common at that point. Key Lime Pie was and is one of the real ones, though. A phenotype of Girl Scout Cookies popular enough to make it alone, Key Lime Pie's flavor is much better than that of a LaCroix, and the high is a consistent nighttime treat. The high goes to work quickly on my body and is more of a slow burn on the brain, but munchies are inevitable, even if I've just eaten. A puff and second round of nosh is a fantastic combination, however, setting me up for a smooth descent into dreamland after a couple of hours in front of the TV.

Although not as popular among growers as it was in 2018, Key Lime Pie is still holding down a few gardens and extractions, including Concentrate Supply Co., Doc's Apothecary, Magic City Cannabis, Nomad Extracts and Verde Natural.

White Runtz
Even one hit of White Runtz packs a punch, and I've smoked bowls that felt like dabs in the past. Although not physically debilitating, the strain's potency leads to such high highs that a comedown is almost impossible to avoid. Take it very slow if you plan on activities or going out in public with this one, and always have a snack on hand or restaurant in mind. Popular flower brands like Cherry, Cookies, Dank by Pank, Malek's Premium Cannabis and Snaxland have all broached the strain, as have a long list of extractors. You can't go wrong with any of them, but Dank by Pank and Snaxland have grown our favorites so far.

Dragon Fruit
My sessions with Dragon Fruit invariably lead to a burst of curiosity and jubilation that lasts for about 45 minutes (always less than an hour) and a longer feeling in my body, which stays relaxed through the high. The waning mental effects bring me down more than the body high, but I've been able to fight through it if I don't over-smoke or overeat when the munchies come — and the munchies always come with Dragon Fruit. Try not to be lulled in by the strain's fruity flavor, reminiscent of tangerines and kiwis, because I've fallen victim more than once. It's hard to find Dragon Fruit flower outside of High Level Health, which has a handful of stores in metro Denver, but extracted versions of the strain are sold across Colorado.
KEEP WESTWORD FREE... Since we started Westword, it has been defined as the free, independent voice of Denver, and we'd like to keep it that way. With local media under siege, it's more important than ever for us to rally support behind funding our local journalism. You can help by participating in our "I Support" program, allowing us to keep offering readers access to our incisive coverage of local news, food and culture with no paywalls.
Make a one-time donation today for as little as $1.