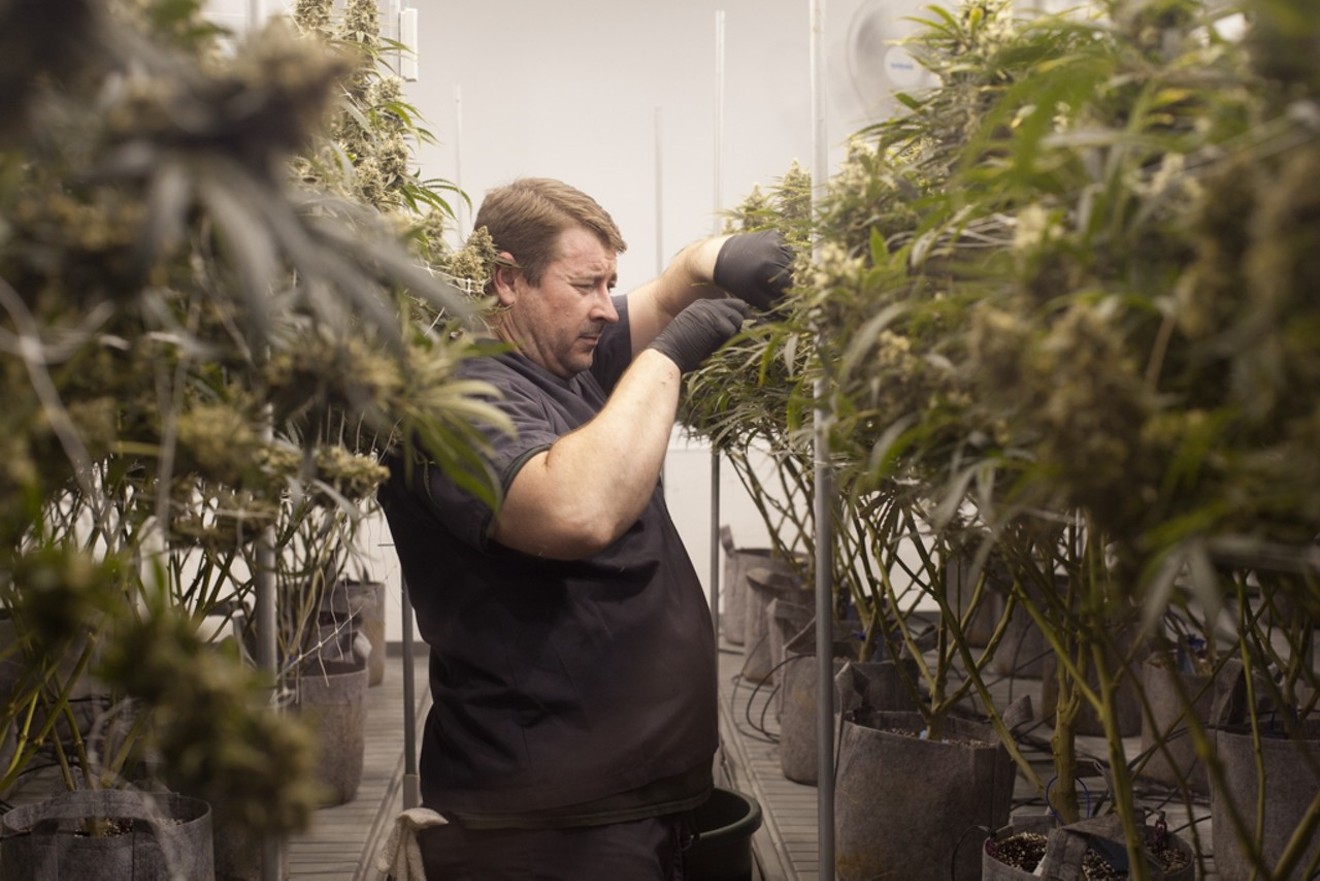 Denver allows no more than twelve plants per household, even for medical patients. Jacqueline Collins
If you’re thinking about starting a cannabis grow in your house but aren’t an expert botanist, don’t worry: There’s now an app for that. The first app to offer personal horticulture services specifically for weed launched on the Apple App Store at the end of January.

Three a Light, released by cannabis consulting firm Medicine Man Technologies, is based on the book of the same name that uses simple methods to teach regular people how to increase their yields — up to three pounds per light, thus the name of the book — from their cannabis plants. Adults 21 and up and medical marijuana patients in Colorado are allowed to grow anywhere from six to sixteen plants at home, depending on a variety of factors, including where they live and if they have a medical marijuana card.

Joshua Haupt, the chief cultivation officer at Medicine Man Technologies (a cannabis consulting firm owned by the same potrepreneurs behind Medicine Man dispensaries), first published the book Three a Light in 2015 after helping his friends in the Rocky Mountains grow for themselves. “I had a lot of friends with medical issues,” he says. “I made them a little pamphlet that was like, 'Follow these steps,' and everyone used it.”

His friends encouraged him to go bigger than a pamphlet, so Haupt wrote Three a Light, filling it with photos and illustrations explaining how to grow the plant to its full potential. There was a hole in the market for this type of book, according to Haupt, who believes there still isn’t literature available that explains the cultivation process from start to finish in a way that the weed-illiterate can understand.

After being out for a few years, he says, the book still maintains a high rating (it currently has a 4/5 rating on Amazon), so why the need to make an app? Shortly after the book came out, Haupt saw a need for customer service. And the most valuable piece of the app, he believes, is the interactive support it provides. The app holds much of the book’s content in a sleek design, with photos for each step of the cultivation process as well as a nutrient calendar and schedule for feeding. Users can sync their plants into the calendar and receive notifications for cultivation reminders.

But the coolest part of the app is the feature that lets growers talk with master growers.

For example, a grower struggling to identify a pest could upload a picture of it to the app and get a response during the company’s business hours. The master growers answering questions have all worked in grow facilities and have thousands of hours of experience working with Haupt.

“Essentially you just get the keys to the castle with the app in your hand,” Haupt says. “You get oversight from people who have been doing this on a much larger scale.” His goal is to help the cannabis industry become more successful and lower wholesale prices of cannabis, while also imparting necessary growing skills to people who need the plant for medical purposes and are choosing to grow at home to save money.

While both the book ($500) and app ($99.99) prices aren’t pocket change, they aren’t much compared to the startup costs of a home grow — or underperforming plants. “It’s a very expensive learning curve,” Haupt explains. “If you do something wrong, you could lose thousands of dollars.” He says he's able to double the amount of cannabis yielded per plant through a combination of tactics, including a process called “schwazzing,” which involves defoliating the plants at specific times of the growing cycle.