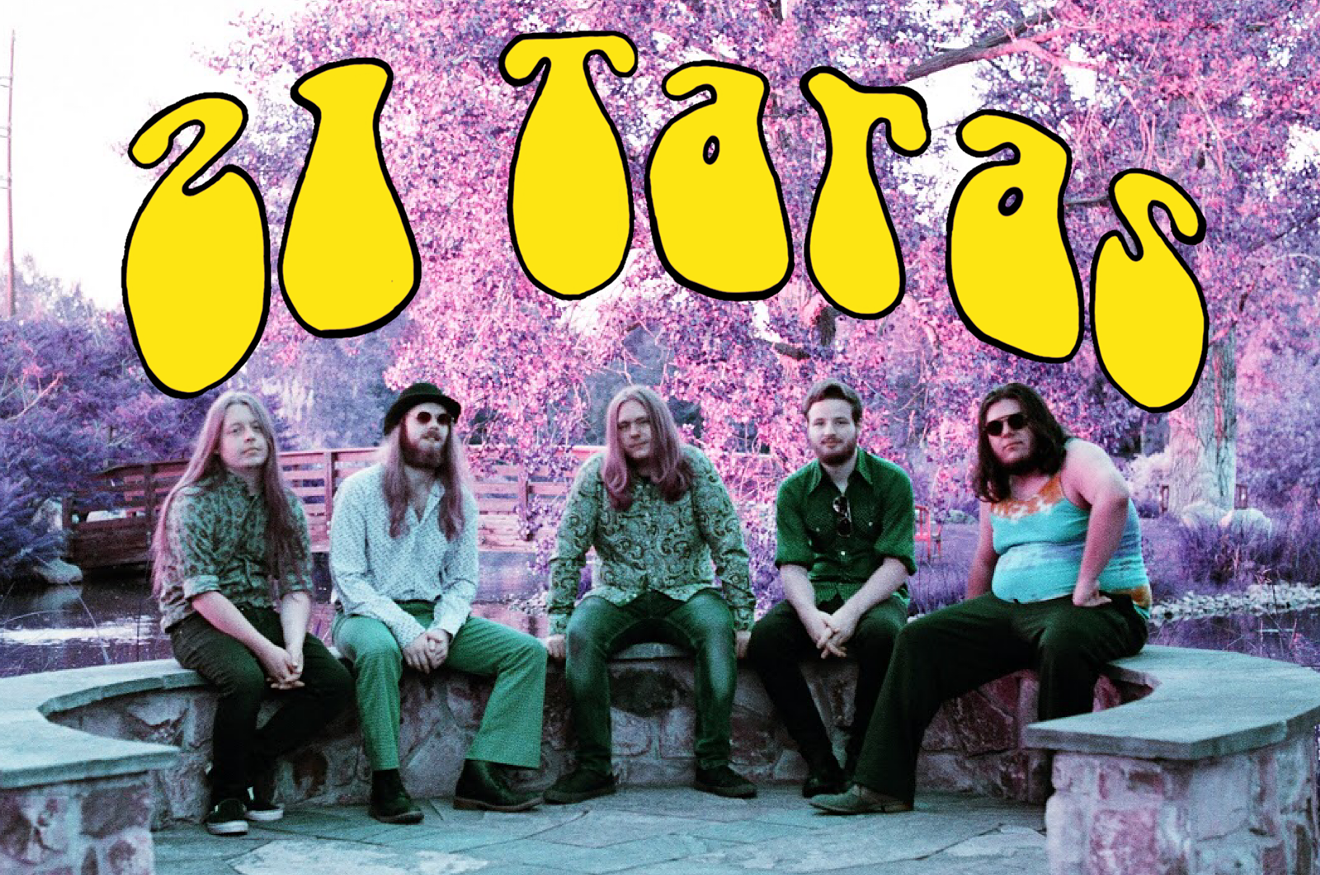 Karissa Gabrick
21 Taras’ sound isn’t easy to nail down, and that’s by design.

The Denver band gravitates toward ’60s and ’70s psychedelia, but its music has been evolving since the bandmates came together in 2015. Their live set jumps between hyper-masculine ’70s rock, early-’90s Soundgarden, foot-tapping jazz fit for a smoky dive, and soaring Beatles-inspired arrangements complete with strings, horns and freewheeling keys.

“I’ve always loved bands who you can identify, but you can’t make out where they’re going. I love the idea of genre being fluid. The ’60s and ’70s focus isn’t gonna be something we focus on forever. I want our sound to continue to evolve in ways we aren’t even aware of yet,” says frontman Julian Fulco-Perron, who completes the band's eclectic stylings with a stage presence embodying the physicality of Freddie Mercury and the vocal theatrics of Chris Cornell.

Like many bands, 21 Taras resists categorizing its own music and instead sees itself as a vehicle for evolution and change. In fact, Change is the name of the group's 2018 LP.

The bandmates debuted with Seize the Ocean in 2016, but that album leaned heavily on traditional ’70s and ’90s hard rock, with only a few tracks devoted to the experimentation that now defines them. A good deal of the LP was also assembled from instrumentals the rest of the band worked on before Fulco-Perron joined. As a result, Change functions as the group's proper debut, incorporating the genre-fluid attitude that Fulco-Perron helped create.

“Julian brought all the strings, horns, string arrangements and bells and whistles to our sound," says drummer Alec Lister. "Without him, our songs would be much rawer and more rock-driven."

“Gettin’ Hungry” sounds like a Tom Waits take on jazz, “Fatal Farm” screams Led Zeppelin injected with Superunknown-era Soundgarden, “Time Traveller” evokes the Beatles, “The Ego and the Universe” takes a splintering, Hendrix guitar lead and melds it with classic blues, and “From a Distance” draws from ’70s soft rock, up until its melodic crescendo.

“We wanted to make a ’60s rock album from the perspective of five people who didn’t live through the era,” Lister says.

“Change was a surface-level experiment into a lot of different sounds," adds Fulco-Perron. "We want to explore some of those concepts more deeply on our next album."

On January 12, the group will headline the Bluebird Theater, where it's incorporating a liquid light show. There will be six projectors flooding the theater with washed-out, ’60s-inspired psychedelic visuals.

“We bring an eclectic nature to our shows that not a lot of other bands have," says Fulco-Perron. "With a lot of bands, you show up and you know what you’re gonna hear. At a 21 Taras show, we want there to be something for everyone. We want to surprise people."

21 Taras, Vic N' the Narwhals and Vicoda play at 8 p.m. on January 12 at the Bluebird Theater, 3317 East Colfax Avenue. Tickets are $13 to $15.
KEEP WESTWORD FREE... Since we started Westword, it has been defined as the free, independent voice of Denver, and we'd like to keep it that way. With local media under siege, it's more important than ever for us to rally support behind funding our local journalism. You can help by participating in our "I Support" program, allowing us to keep offering readers access to our incisive coverage of local news, food and culture with no paywalls.
Make a one-time donation today for as little as $1.