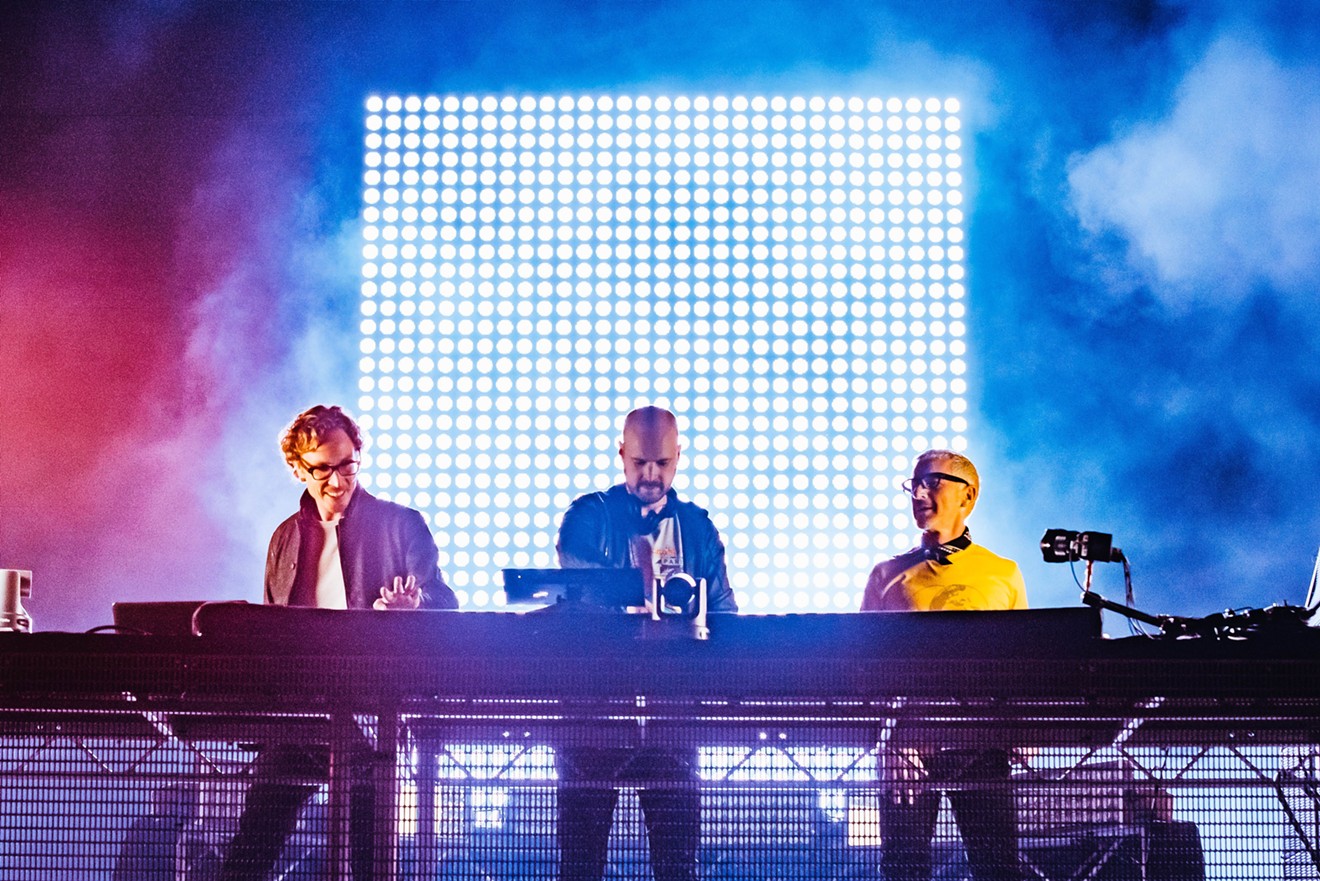 Luke Deakin
For reasons typically rooted in jealousy, greed and substance abuse, bands break up as often as Californians move to Colorado. It’s happened to the best of the Brits  — the Beatles, Spice Girls, Wham! and One Direction, to name a few. But perhaps the London-based Above & Beyond will buck the trend and stick it out.

Jono Grant, Paavo Siljamäki (the lone import, from Finland) and Tony McGuinness have been making trance music for nearly 22 years as the aptly named Above & Beyond. They run the Anjunabeats and Anjunadeep record labels, handle the A&R, produce original music, recruit artists, host the Group Therapy weekly podcast, throw big parties, and tour the world with stops on six continents — including upcoming shows at Red Rocks on October 21 and 22.

Like British tabloid clickbait scumbags, we playfully urged Grant to divulge a juicy altercation with either of his Above & Beyond mates, but that’s not the band's style: The peace and warmth revealed in its music is genuine.

“We’ve never been violent,” Grant relates from the Anjunakitchen Studio in England. “There have been a few times where someone’s written a song and then the final mix is different from the original — ‘Northern Soul,’ for example. But it’s the creative tension where each member of the group can be on different sides, and it’s that space where the magic happens.


"I’ve learned to not be attached to my ideas," he adds. "I’ve been on the other side of these things; it’s part of life."

During the pandemic, Grant stayed sharp on the controls during the London lockdown by streaming DJ sets at home he called “Anjuna Unlocked." His wife, glass of wine in hand, supported from the couch while their dog, Bitsy, jammed along with a chew toy. No dis to Mrs. Grant and the pooch — their unwavering support is to be commended — but let's hope that "Anjuna Unlocked," like the lockdowns themselves, is retired for good.

“My mother suggested that the pandemic was a good time to be creative, but I wasn’t feeling it. I struggled with the lack of freedom to see friends and do normal stuff,” says Grant. “Now that we’re back, our first job is to give people what they had before. I think people want the life they lost.”

Above & Beyond will roll into Colorado fresh off gigs at the Creamfields festival in the U.K. and U.S. shows in Chicago, Miami, Atlanta and Stanford, California.

Affectionately known as the “Anjunafamily,” fans love the live shows, which have a ritualistic feel. There’s familiarity and order: The Red Rocks faithful will surely sing along with originals such as “Counting Down the Days,” “We’re All We Need,” “Thing Called Love” and other vocal trance toe-tappers. And Above & Beyond will rinse a few classics from labelmates Mat Zo, Gabriel & Dresden, Super8 & Tab and others. Some trance is angry, another subgenre is psychedelic, and then there is Above & Beyond’s flavor, which is largely fresh, positive and sentimental. The music has a way of connecting people and forming tribes. Above & Beyond in action.
Luke Deakin
Perhaps love will bloom again at Red Rocks when someone is randomly selected to stand behind the turntables in front of 10,000 ravers and “press the button." It's a peak moment at shows, when a track is looped and a fan is invited on stage to be celebrated and to release the loop. There’s a Facebook Group reserved for the button-pressing chosen; the moment is so special that it once spurred a transatlantic whirlwind love affair.

Back in 2016 at the Ziggo Dome in Amsterdam, Ciarán Smyth, a cop from Northern Ireland, and Xenia Lee, then a graduate student from New York, were co-selected. They didn’t know each other, didn’t formerly meet on stage, and left the Ziggo Dome strangers. But a week later, they linked on Instagram, and their bond proved substantial. For the next eighteen months, the trance-family lovers swapped Ireland and New York flights. They FaceTimed daily and gushed over Group Therapy episodes. Eventually, the enormity of the Atlantic Ocean proved too vast, and they called it quits just shy of their two-year anniversary. But any fan would agree: ’Tis better to have pressed the button, loved a random co-presser and lost than never to have loved at all. With the official arrival of cuffing season, perhaps it will happen again.

Grant is humble when acknowledging the impact of Above & Beyond's music and how it is regularly part of weddings, funerals and survival stories. Shortly before our conversation, he recorded a message for a couple from south of London who will walk down the aisle to “Good for Me” and are using “Thing Called Love” for their first dance. Others lean on Above & Beyond to fight illness or depression.

“It’s overwhelming and slightly strange to be part of people’s lives. They want to thank me, and I wonder, what did I actually do?" muses Grant. "I try not to take it too seriously. It’s lovely to have a connection in people’s lives, and that’s a fabulous thing. For people finding hope in our music, I like to believe that if they hadn’t found us, they would’ve found something because [they] wanted to turn things around.”

The Gardenstate duo of Sweden’s Marcus Schössow and New Jersey’s Matt Felner will open the evening at Red Rocks. The venue traditionally gifts performing artists an ornament each time they take the stage; this will be the sixth ornament for Above & Beyond, the first for Gardenstate. In fact, it will be the first time in Colorado for Felner, who recently returned from Iceland, where he and Schössow filmed a DJ set near an active volcano. The set is slated to appear on the Anjunabeats YouTube channel on October 15.

“Gardenstate has been such a long time coming for Marcus and I,” Felner says. “Our first album, Inspirations, is launching soon, and we’re playing Red Rocks. Wow, unbelievable.”

Above & Beyond play Red Rocks Amphitheatre, 18300 West Alameda Parkway in Morrison, at 6:30 p.m. Thursday, October 21, and 7 p.m. Friday, October 22; Olan and Gardenstate open. Learn more at aboveandbeyond.nu.
KEEP WESTWORD FREE... Since we started Westword, it has been defined as the free, independent voice of Denver, and we'd like to keep it that way. With local media under siege, it's more important than ever for us to rally support behind funding our local journalism. You can help by participating in our "I Support" program, allowing us to keep offering readers access to our incisive coverage of local news, food and culture with no paywalls.
Make a one-time donation today for as little as $1.