When two of the country’s biggest female-fronted rock bands, Evanescence and Halestorm, teamed up to tour in 2012, singers Amy Lee and Lzzy Hale became fast friends. Nearly a decade later, they're on the road again for a co-headlining tour that stops in Denver on Thursday, November 18.

When Lee and Hale sat down for a Zoom interview in early October, about a month before the tour started, they talked about getting back into the performing mindset and how to keep it cool on stage during their famously emotional songs. Neither band has been on a major tour since 2019, and both singers were doing cardio to get their endurance back while working on their respective set lists.

Those lists have been a challenge, considering how much both bands' catalogues have grown over the years. Halestorm has been incorporating its new single, “Back From the Dead,” into recent sets while also drawing from albums like 2012’s The Strange Case Of… and 2015’s Into the Wild Life.

A good portion of Evanescence’s sets feature material from the band's dark and heavy new album, The Bitter Truth, which was released in March on BMG. Lee says the album deals with facing the bitter truth of the world and reflecting on the 2018 death of her younger brother, Robby.


She notes that those songs that deal with pain and loss can take on different meanings in the moment of performance, describing the energy of the room and "times when I'm just living in the music and it's not as much about the lyrics — it's just the feeling of the present moment."

“As for some of the deeper and heavier lyrics, I always have to hold myself back just a little tiny bit on stage to be able to get through some of that," she continues. "Because if you completely give in to the emotion that your heart wants in a live setting...you start to cry and break down.

“I've done that. It really doesn't sound good. It's really hard to get back, and I've done it and I've recovered," she says. "But it's just that you start getting choked up and then kind of lost.” 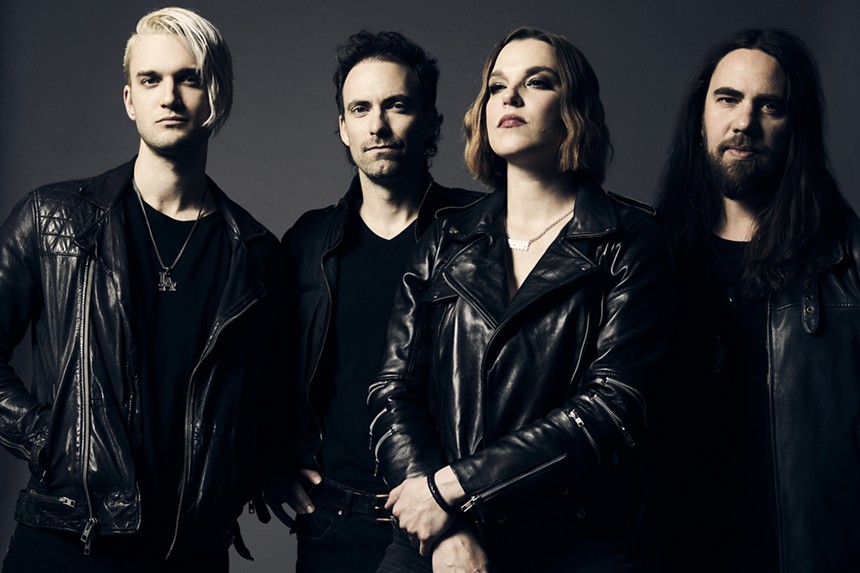 Halestorm.
Jimmy Fontaine
Lee says she has to balance staying in control with being able to live in the moment on stage.

“There are times when I have to go, ‘It's okay,'" she explains. "I think about something else for just two seconds and...come back to where I am so that I can stay in control, because it's beautiful and emotional [and] such a wonderful thing to let the waves just ebb and flow...and let the music flow through you.

“A lot of times when I'm performing, it’s not like there are thoughts in my head," she adds. "It's like you're a conduit of something. I just see black when I close my eyes, but I feel like...a living piece of music. It's the best feeling in the world.”

Hale remembers a potent moment when they sang "Break In," the Halestorm song that features Lee, for the first time live in September. When she sang the first line, "Put your lighter in the air and lead me back home," the entire venue lit up.

“We were just getting to the last chorus, and they were so loud, everybody's singing, and then I just do that last line and I'm just like, ‘Jesus, okay, now I can let go,’” she recalls.

Lee agrees: "You see the entire arena lit up with phone lights, and it's just...this transcendent, beautiful, ‘What am I a part of' thing."

"You can feel this reverberation of energy throughout the room," Hale adds. "It was really weird and thick, like everyone singing and thinking, ‘How can I get through this song?’”

“It's hard to ride that freight train," Lee says. "It's so beautiful.”

Evanscence and Halestorm, with Plush, 7:30 p.m. Thursday, November 18, Bellco Theatre, 700 14th Street, $49,50-$169.50, axs.com.
KEEP WESTWORD FREE... Since we started Westword, it has been defined as the free, independent voice of Denver, and we'd like to keep it that way. With local media under siege, it's more important than ever for us to rally support behind funding our local journalism. You can help by participating in our "I Support" program, allowing us to keep offering readers access to our incisive coverage of local news, food and culture with no paywalls.
Make a one-time donation today for as little as $1.