Metal Legends: Cannibal Corpse Is Out for Blood 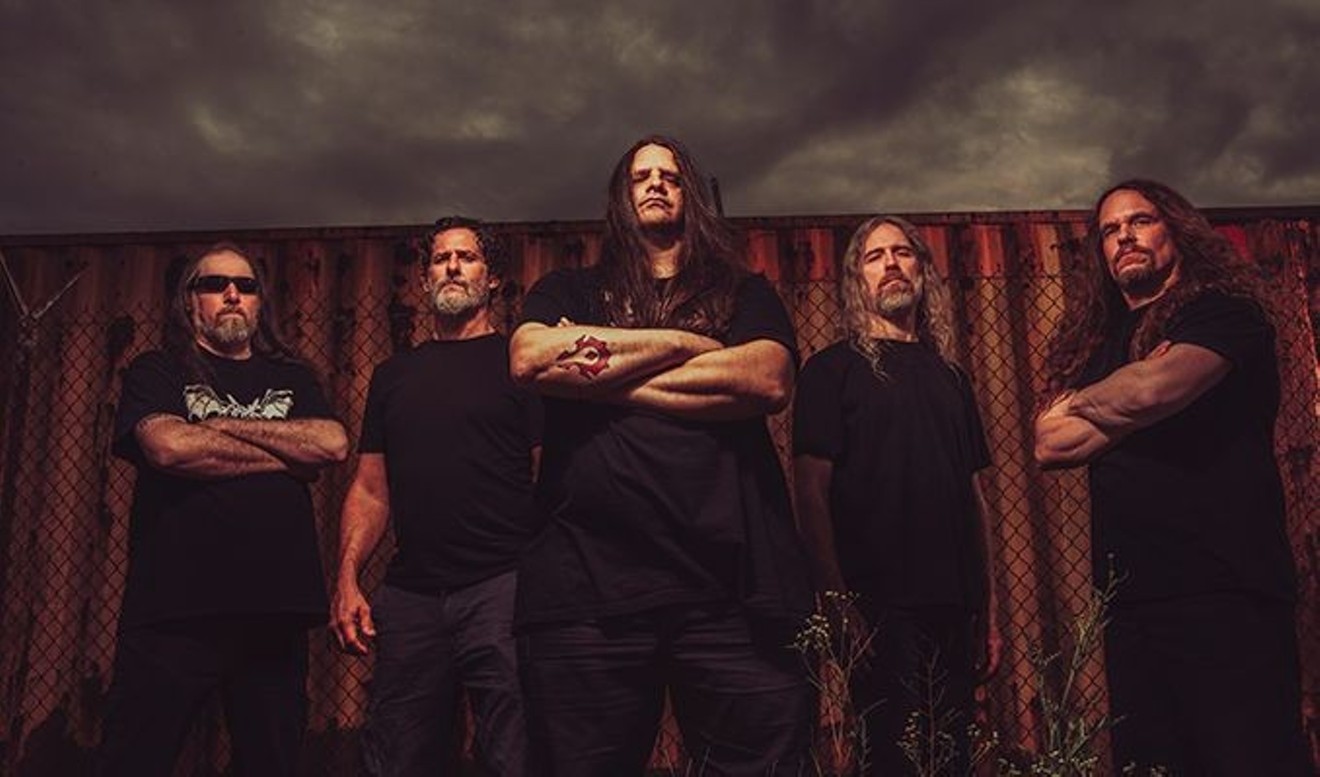 Cannibal Corpse are legends of death metal. Courtesy of Cannibal Corpse
After more than thirty years of gore-obsessed depravity, Cannibal Corpse is stronger than ever. The Buffalo band that helped create and define the burgeoning subgenre of Florida death metal after permanently relocating to Tampa in 1994 released Violence Unimagined nearly a year ago.

The album peaked at number three on Billboard's Top Hard Rock Albums chart and at 45 overall, but a nationwide tour had to wait until 2022. Now on the road promoting the album, Cannibal Corpse plays Denver’s Gothic Theatre on Friday, March 4. Whitechapel, Revocation and Shadow of Intent are also on the bill.

Violence Unimagined fits nicely in the band’s canon, as it will bash your brains in for nearly 43 minutes, courtesy of eleven brutal songs with titles such as “Inhumane Harvest,” “Bound and Burned” and “Surround, Kill, Devour.”

George “Corpsegrinder” Fisher’s vocals are still ferocious. The lead guitar work of Erik Rutan, who officially joined the band last year after filling in during a 2019 tour, is razor sharp and pairs perfectly with Rob Barrett’s rhythm parts to form a devastating sonic attack. Meanwhile, bassist Alex Webster and drummer Paul Mazurkiewicz — original Cannibal Corpse members and the masterminds behind the band’s signature sound and gratuitous lyrical content — provide the blueprint and rock-solid foundation for such auditory mayhem.

The cherry on top of Violence Unimagined is the cover art by longtime band collaborator Vincent Locke, which is too stomach-churning to describe or show here. (Hint: Locke's latest blood-drenched offering is reminiscent of the artwork for Cannibal Corpse's previous albums, Tomb of the Mutilated and Butchered at Birth.)

Corpsegrinder called the album “one of the best records we’ve done” in a recent interview on the popular YouTube channel Little Punk People.

“We’re extremely happy with it. The reaction was amazing across the board from the fans and whatnot. We worked really hard on it,” he told host Elliott Fullam. “Excited to get back out there. It’s one of the best records we’ve done. We really pushed hard for this one, and the reaction has been amazing.”

Bursting onto the scene with 1990’s Eaten Back to Life, Cannibal Corpse has made a career out of controversy. In 1995, then-U.S. Senator Bob Dole was adamantly convinced that Cannibal Corpse’s transgressive imagery and macabre lyrical content was responsible for the moral degradation of the nation.

Germany and Australia began banning Cannibal Corpse record sales immediately in the early 1990s and continued through 2006. In Germany, there are still certain Cannibal Corpse songs that cannot be performed live. And although the band's albums can now be purchased in Australia, you must be eighteen years or older to buy them, which means that Cannibal Corpse is considered as bad for your health as smoking cigarettes or drinking alcohol.

A 2014 Russian tour was all but killed when six of the band’s eight tour dates were canceled because of religious protests. It’s still illegal to translate any Cannibal Corpse lyrics into Russian, let alone distribute records or showcase Locke’s album art. Is this death metal band America’s secret weapon against Vladimir Putin’s Russia? Who knows? But the bandmembers have always maintained that they create musical art in the same vein as horror movies.

“Obviously, they’re all horror movies,” Corpsegrinder matter-of-factly reiterated during the Little Punk People interview, adding that Cannibal Corpse is inspired by everything from Stanley Kubrick’s classic 1980 psychological thriller, The Shining, to Lucio Fulci’s 1984 Italian horror tome, The Gates of Hell.

While American politicians and world leaders were losing their minds over Cannibal Corpse’s brand of art, the band made a surprise cameo in the popular 1994 comedy Ace Venture: Pet Detective, when Jim Carrey’s titular character wandered into a death-metal show and jumped on stage to handle vocals while the band played “Hammer Smashed Face.”

Chris Barnes, who was the band’s original vocalist before being kicked out of the group and replaced by Corpsegrinder in 1995, shared the stage with Carrey, who was supposedly a fan of the band at the time, or at least had heard of it.

The appearance increased the group's popularity, and Cannibal Corpse went on to become the best-selling death-metal band of the 1990s, partly because of Barnes’s early vocal work. But he has been in the news lately for other content he’s created, having taken to Twitter to slam the current state of death metal after watching the video Knotfest Presents: A Death Metal Round Table, which included a conversation between current genre vocalists Corpsegrinder, Travor Strnad of The Black Dahlia Murder, Chase Mason of Gatecreeper and Alex Jones of Undeath.

The Six Feet Under frontman said the discussion made him “physically ill.”

“I despise what this genre has become,” Barnes tweeted. Many on social media wondered what his beef was, but he’s refused to further explain his comments since the hot-take tweet.

But Corpsegrinder, who is one of heavy music’s most recognizable and endearing figures, couldn't disagree more about the state of the current scene.

“There’s a bunch of bands going out here now. The scene is as healthy as it’s ever been. It’s just as great as it’s ever been. It’s not dead. It’s not terrible. I’m proud of the death-metal scene today. I’m so proud of it. I think it’s amazing. I think there are so many great bands,” he said on Little Punk People. “We’re going out on tour with Revocation and Whitechapel, two awesome, great bands. The scene couldn’t be better. Anyone who thinks otherwise: Kiss rocks. I am so proud of the death-metal scene.”

Revocation, guitar virtuoso Dave Davidson’s technical death-metal outfit, is as heavy and terrifying as an H.P. Lovecraft story. Similarly, deathcore titan Whitechapel is named after Jack the Ripper’s favorite stamping ground and plays exactly the music you’d think a mass murderer would listen to. The Tennessee band is touring in support of its latest record, Kin. Shadow of Intent is a mixture of Halo-inspired lyrics and symphonic death metal.

The variety on the upcoming Cannibal Corpse bill further hammers home Corpsegrinder’s state of the scene. At the end of his interview with Fullam, Corpsegrinder also shared a simple message: “Be safe. Stay metal.”

Tickets for Cannibal Corpse's upcoming Denver date are sold out.
KEEP WESTWORD FREE... Since we started Westword, it has been defined as the free, independent voice of Denver, and we'd like to keep it that way. With local media under siege, it's more important than ever for us to rally support behind funding our local journalism. You can help by participating in our "I Support" program, allowing us to keep offering readers access to our incisive coverage of local news, food and culture with no paywalls.
Make a one-time donation today for as little as $1.