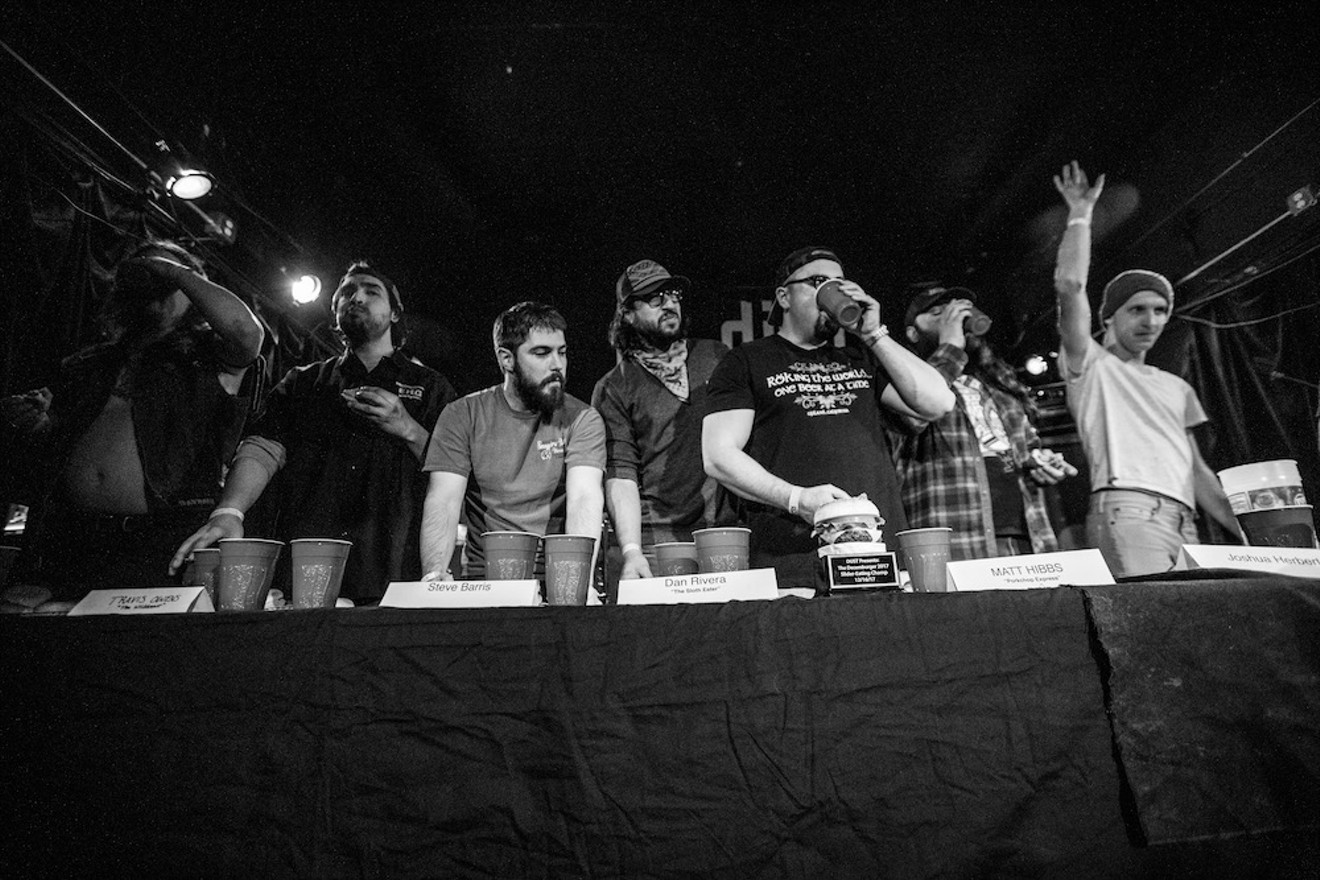 Mike Goodwin
Decemburger, Denver's annual mix of metal music fest and eating contest, claims to be “the world’s only heavy-metal / competitive eating throwdown” of its kind. Whether or not that's true, the event, held at the hi-dive, stands out as a singular celebration of Colorado's thriving heavy-music scene and good eating.

As in previous years, the concert will spotlight the heaviest of the heavy, but instead of focusing only on rock and roll, psych and doom, this year's lineup will be more diverse. Axeslasher will serve up some serious thrash, Crypt Trip will dish out heavy psych, Glacial Tomb will offer atmospheric black metal, BUMMER will bring aggressive punk, and The Ditch and the Delta will play noisy prog.

But the cheese on the slider will be headliner Uada and its melodic black metal.

Mike Goodwin
"Honestly, I had not heard of the fest before and didn't know what it was," explains Jake Superchi, who sings and plays guitar for the band. "Our agent was booking us a tour around the pre-fest show for Decibel's Metal & Beer Festival and had mentioned there was another fest in Denver interested in having us. We couldn't pass on Denver, and we've heard nothing but great things about the hi-dive."

Although Uada doesn't quite fit in with the fest's rock-and-roll vibe, its members aren't worried.

"We seem to be the odd band out most of the time, so it's nothing we aren't used to," Superchi says. "With that said, though, we do acknowledge our rock and heavy-metal roots in our music, so maybe this is a reason for it. Either way, we're excited to be a part of this event and look forward to leaving our mark."

The band plays blistering, melodic black metal with lyrics that reflect both its daily struggles and the current state of the world.

Decemburger Flier
Decemburger
"The lyrics are based on life and what was surrounding myself and the band at the time, reflections of where we came from, who we are, society and the state of mental health issues," says Superchi about the group's latest record, Cult of a Dying Sun. "During the creation of this album, there were a lot of trying times and member changes. We're a band that will not compromise our message or where we see ourselves in the future. There's much more to it than just music or empty words. This is a breathing entity, heart and soul."

In addition to the brutality and bleak lyrics of Uada, however, Decemburger will offer attendees burger-inspired flash tattoos, a slider food truck and competitive eating. No matter how many big-name acts organizers add to the bill, the spirit of the fest will remain the same: gluttonous and loud.

"The eating contest will be more epic than ever," explains DUST Presents, the team behind the annual fest, in a statement. "We're allowing more time for it to really increase the theatrics. It's going to be quite the spectacle. Two-year reigning champion Andrew Renfrow has signed to Major League Eating and is contractually unable to compete this year. So it's going to be interesting to see who gets their greasy hands on the Decemburger III Trophy."

Decemburger, 5 p.m. Saturday, December 15, hi-dive, 7 South Broadway, $25 to $35.
KEEP WESTWORD FREE... Since we started Westword, it has been defined as the free, independent voice of Denver, and we'd like to keep it that way. With local media under siege, it's more important than ever for us to rally support behind funding our local journalism. You can help by participating in our "I Support" program, allowing us to keep offering readers access to our incisive coverage of local news, food and culture with no paywalls.
Make a one-time donation today for as little as $1.