Elizabeth Rose Isn't Just a Rapper, She's a Narrator for Those Unable to Read 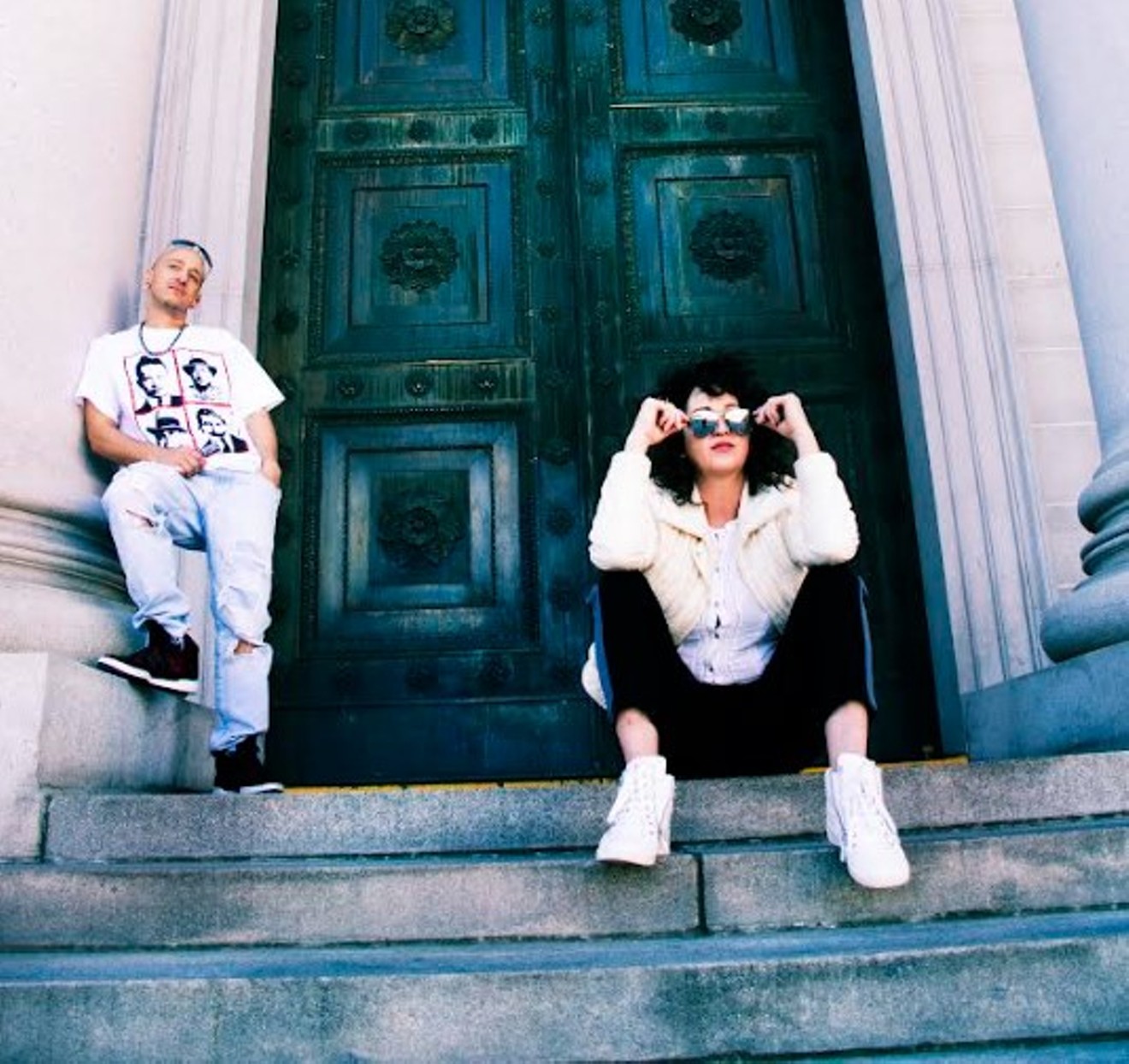 S1lencer consists of Elizabeth Rose and RH1N. Courtesy of Elizabeth Rose
Now in her fourth decade of making music, Elizabeth Rose currently rocks the mic as one half of Denver hip-hop duo S1lencer. While her vocal artistry has earned her a nice local following over the years, it’s her work around the microphone in her day job that reaches a national audience. But that gig, she says, hasn’t fostered adulation. “No one,” Rose says, “has ever come up to me and said, ‘Hey, that was really great hearing you.’ I have no connection to my audience.”

What Rose does have are listeners who truly need her work: Americans who are blind and print-impaired (unable to physically hold books and magazines) and get their “reading” through a free program from the National Library Service. Part of the Library of Congress, the program serves about 300,000 people who get audiobooks and magazines through flash drives and downloadable files. Rose brings her hip-hop-fostered cadence, flow and gift for creating aural characters on the fly to this audience, and she's putting in more studio time than perhaps any rapper in town.

Rose is an employee of Talking Book Publishers, a long-running Denver company that provides narrated books and magazines to the NLS as a contractor. The issues her listeners face are highlighted each October through Blindness Awareness Month, which opens eyes to the hurdles of sight-impaired people. Rose started working for Talking Book in 2012 as a recording monitor, and two years later she became an NLS-approved narrator.

On a recent morning at Talking Book, Rose voices a “bodice ripper” romance novel. “Part of my job,” she notes, “involves reading explicit descriptions of sex.” She handles the voices of every character in the books she voices, as well as being the narrator. (Rose also reads popular lifestyle, women’s and music magazines for her job.) Today’s tome includes a young British man and woman in steamy repartee on a train. Rose stands in a small soundproof booth, facing a glass window and a high-end microphone positioned alongside a laptop with the book’s text. On the other side of the window, a co-worker “monitor” follows along with the text while she reads. As she does so, they each call for frequent stops to fix what seem like minor things to an observer. “Sorry,” Rose says, “my knee popped there.” The monitor backs up his cursor on the track displayed on his computer screen, and they retake the phrase, which Rose speaks in a debonair male voice with an unctuous upper-crust English accent. “Should I apologize for being mahvelous?” the character says to the intrigued woman on the train. “I was hoping to entice you.”

Rose stops: “Sorry, I lost his accent there."

The two work at a fast and steady pace, despite the frequent stops. “Is that a long ‘i’ in licentious?” Rose asks the monitor. For an answer, he turns to another screen that holds a “pronouncer,” a document that includes a pronunciation guide to the book’s text. Such questions sometimes get answered by consulting Talking Book’s stash of dictionaries and encyclopedias — or in the case of this novel, BBC sources. When pronunciation questions remain, the term is added to an ongoing document (a “runner”) that, after the book is read, goes to an auditor who may call for corrections. Needed updates will get re-voiced by the narrator, then mixed back into the audio track. The entire narration process relies on diacritics, which guides the craft of Rose and her peers. A typical book takes about 1,000 minutes to complete, and Rose estimates that she has read hundreds of them on the clock.

The dialogue of the male suitor in today’s book soon hits a nerve with Rose. “I especially hate women who read,” he says through Rose’s smarmy, condescending accent. “When a female sticks her nose in a book, she grows too domineering.” As she finishes that line, she breaks into a laugh. “This guy is such a dick,” she says to her recording partner, who laughs and gives a thumbs-up in agreement. A few minutes later, the book hits a heated spot. “He kissed her,” she reads dramatically. Rose has the female react in a breathy but resistant tone. “I didn’t like it,” she sneers to the cad. “You’re a liar,” he replies through Rose’s lower-register, whispered-in-your-ear male characterization. “You’re all a-fluttuh.”

Rose has been recording music tracks in Denver for about thirty years. Many local music fans know her as the frontwoman for Sympathy F, an indie/art-rock band that debuted in 1992 and released three full-length recordings in its ’90s heyday; Sympathy continues to play occasional shows. She then performed her own material for a few years at local venues under her own name, with Tony Morales on drums and Kyle Jones on bass. The trio cut two full-length CDs and toured extensively across the Southwest. In more recent times, Rose fronted Soldier of Love, a Sade tribute act she created that frequently sold out the Clocktower Cabaret.

In April 1999, Rose’s musical career was interrupted when she landed a starring role in the wildly popular musical I Love You, You’re Perfect, Now Change, which ran for three years at the Denver Center for the Performing Arts. The acting work continued with a major role in the regional premiere (and the subsequent touring production) of Newsical the Musical, which ran at the Denver Civic Theatre from 2004 to 2006. Following that play, she helped launch Crossroads Theatre in Five Points in 2006, and she's had roles in indie films and television shows over the past few years.

Greg Savage, who runs Talking Book (a company his father started in 1965) with his wife, Melissa Savage, says Rose’s background has shaped her work. “Narration is a very specific talent to develop,” he says. “Elizabeth’s experience as an actress and a musician makes her unique. She also has a lot of talent and an incredible work ethic.”

In S1lencer, Rose works her rapping skills with bandmate RH1N, who describes the duo’s sound as “electronic mixed with a little bit of ’90s golden-era hip-hop. We also incorporate new sounds and drums, some dubstep and other new stuff from the past decade.” He says the act appeals to those who like rock and hip-hop and “aren’t so tunnel-visioned in their music.” S1lencer has produced a full-length recording and three YouTube videos since playing its first show in 2019. The bandmates worked on new material during the pandemic, and now have 35 songs in their repertoire.

The two met while in 100 Shots, a Linkin Park-style band that played local clubs and theaters from 2012 to 2018. Near the end of the band’s tenure, RH1N decided to veer from guitar-driven aggressive music to a sunnier sound. “We don’t shout at our audience in this band,” he says of S1lencer. “We sing about social commentary and touch on current events, and we also do songs about partying and fun and flirting. I like to speak positively. We don’t use the word ‘bitch’ in our songs; we don’t do booty call ‘Hey, hit me up’ songs.”

Rose adds that they fill a unique niche in Denver: “There are no other male/female hip-hop duos here that I know of."

S1lencer will play a set at Herman’s Hideaway on Friday, October 7, for Crazy Town's Pre-Halloween Party, a variety show including burlesque performers, a fashion show and a costume contest. The band expects to appeal to the fans of Crazy Town, whose 2000 hit, “Butterfly,” reached number one on the U.S. Billboard Hot 100 chart. “Their crowd is a little older, and I think they’ll really dig into what we do,” RH1N says. Rose’s job as a pro narrator also provides an advantage: “You can really understand what we say in our shows,” she says with a laugh.

Rose will get something special from the show: cheers from a live audience. “That’s something I really love, even though it’s something I’ve done without for years in my job,” she says.

But she’s not complaining. Her day gig, she says, “takes my ego completely out of the picture, and I’m using skills I don’t get to use elsewhere. And I get to use those skills to benefit people who can’t see or read. I get to bring books to life for them. I don’t need applause for that.”

S1lencer plays Crazy Town's Pre-Halloween Party, 7 p.m. Friday, October 7, Herman's Hideaway, 1578 South Broadway. Tickets are $20-$200.
KEEP WESTWORD FREE... Since we started Westword, it has been defined as the free, independent voice of Denver, and we'd like to keep it that way. With local media under siege, it's more important than ever for us to rally support behind funding our local journalism. You can help by participating in our "I Support" program, allowing us to keep offering readers access to our incisive coverage of local news, food and culture with no paywalls.
Make a one-time donation today for as little as $1.
Marty Jones