Bars None: Flobots Rise Together on a Trio of Powerful New Releases

Stephen Brackett and Jamie Laurie of Flobots. Amanda Tipton
In a moment of electrifying terror toward the end of the biggest Flobots song, “Handlebars," the protagonist — who grew up making comic books, square dancing and proudly riding his bike with "no handlebars" — threatens to rise to power and take command of the world with a microphone. Boldly, he declares he can end the planet in a holocaust.

“A holocaust?” shouts rapper Jamie Laurie, aka Jonny 5. “A holocaust.”

The kid who once embraced a do-it-yourself sensibility and took pride in his expansive knowledge of Leif Erikson has grown up and become a global monster — or he’s suffering from delusions of grandeur that he could be one. Laurie repeats “a holocaust” over and over again as the instruments rise in a manic frenzy, angry, destructive and fueled by ego.

Throughout the song, the band charts the course from childhood innocence to corruption, imaginative whimsy to plots of totalitarian control. The tantrum that the character throws at the climax is at once cathartic and cautionary: It’s not that hard to become an abusive, power-hungry dictator hell-bent on global death and everything you hate and fear in others.

The song’s denouement, a repeat of the seemingly naive line “I can ride my bike with no handlebars” uttered through a fuzzy microphone accompanied by the pluck of a fiddle, sounds menacing. Like a butterfly beating its wings and causing a tsunami, a kid’s pride in a bike trick might just foreshadow total obliteration. 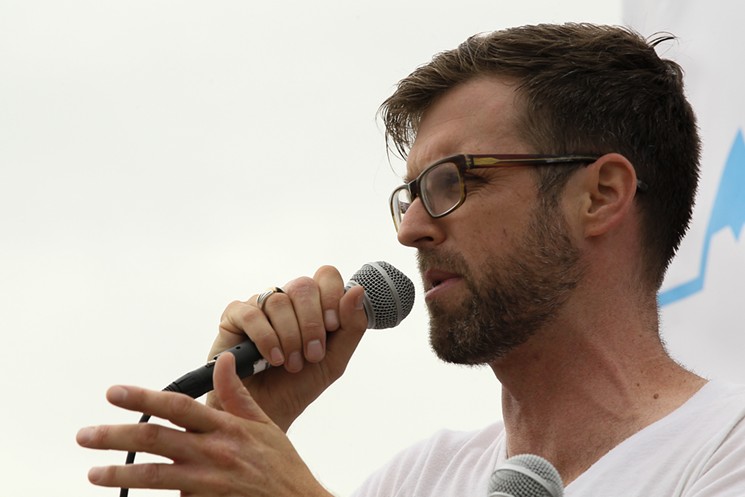 Jonny 5 of Flobots.
Brandon Marshall
The song, first recorded in 2005, blew up in 2008, toward the end of George W. Bush’s reign. It brought national acclaim to childhood friends Laurie and Stephen Brackett, aka Brer Rabbit, the frontmen of the indie hip-hop band. “Handlebars” became a Top 40 radio banger, a catchy anthem for millennials entering adulthood, ready to take on the world.

With momentum from the act's major-label debut, Fight With Tools, the bandmates helped energize a nonprofit they had founded in 2007, with funding from the Hunt Alternatives fund. Laurie, who had planned to be the organization's executive director, stepped back from leading the group after "Handlebars" blew up. The organization eventually became Youth on Record and took on a successful life of its own, recently receiving a million-dollar grant from philanthropist MacKenzie Scott, ex-wife of Amazon founder Jeff Bezos, as part of a $2.75 billion charity campaign.

Over the years, Flobots went through various iterations, losing and regaining members. Laurie and Brackett invested their time in various nonprofits and social causes, from ending the wars in Iraq and Afghanistan to stopping the emerald ash borer from ravaging trees in Denver. Along the way, the rappers championed everything from music education to refugee rights, and did it all with a philosophical introspection that has kept them from turning into the destructive brutes they feared becoming in “Handlebars.”

Despite all that activism and community work, Flobots retreated from the national eye. The group was briefly resurrected when notorious YouTuber Logan Paul parodied “Handlebars” with “Can’t Handle Bars.” Flobots sued Paul, and the case was settled out of court. The band received compensation, and the vlogger took his satirical video offline.

In recent years, even some diehard fans viewed Flobots as a one-hit wonder. Shrugging off the haters, Laurie and Brackett doubled down on community organizing, recording new music, collaborating with Denver cultural groups like the dance troupe Wonderbound, and modeling a different type of success — one rooted in the community activism that the group has long espoused.

At best, the band’s music since Fight With Tools has mirrored its members’ introspection and self-awareness, their unflinching regard for human flaws and inner violence, and also their desire to overthrow systems of oppression — both within themselves and in the world at large. Their vision of the world has been driven by a notion of grace and reconciliation, but it's also critical of the authoritarian tendencies overrunning so much current political organizing in all ideological arenas.

Now, after a year of negotiating what it means to be both part of a band and community activists during a pandemic, the members of Flobots are gearing up for two shows — a rescheduled July 2 date at Levitt Pavilion and a July 3 gig at Mishawaka Amphitheatre. In lieu of an album, in April the band began releasing a string of tracks that are making fans reconsider whether viewing Flobots as a nostalgic act might have been a mistake.

On June 5 — the band's original Levitt date before slashes of lightning tore open the sky — fans slumped back to the parking lot. Some played Flobots on their phone; others tailgated, blasting a Flobots playlist, hoping the show would resume. When the new song “Roshini,” the first of the three to drop, came through one set of car speakers, everyone paused. “Is this really Flobots?” wondered one guy. “I guess...yeah...it’s new.”
Beyond Laurie's voice in “Roshini,” which translates to "light" in Hindi and is named after an Aurora arts nonprofit, the song not only doesn’t sound like Flobots, it doesn't sound like much else in existence. It’s that rare track that’s actually surprising, at once catchy and experimental — not unlike “Handlebars.”

In the summer of 2020, Laurie had been invited by the Roshini nonprofit to perform at the second annual New American Arts Festival. “I was hungry for some excuse to talk to real people,” Laurie recalls, and he agreed to take the mic on one condition: “I would actually love to involve the voices of the East Colfax neighborhood.” The neighborhood, which has long been a haven for refugees and immigrants from all over the world, is home to dozens of languages.

“I said, ‘I'd love to record the voices of the people in the program and voices of other people I know in the neighborhood and, using just the voices, make this audio tapestry, this kind of collage, and then include some lyrics over that,” he remembers. After sharing his efforts with his bandmates, he recalls, “They said, ‘We should make this into a full song.’” So they took it to producer Joseph Shull, with whom they had worked previously, and he added some instrumentals. Flobots MC Stephen Brackett.
Evan Semón Photography
The bass line of “Roshini” was built from human voices saying “Together we rise” in various languages. This echoes a line from the old Flobots song “Rise,” an anthem of redemption, the hopeful counterpoint to the morbid view of power in "Handlebars."

The track, mixed and mastered at the Blasting Room Studios in Fort Collins, starts out as chaotic as an international airport soundscape. Then the beats turn into a cutesy, rhythmic squeak as Laurie raps, “Together we rise like fire and smoke / Together we conspire so we never lose hope / Together reach higher than you ever could know / Meet destiny. Together we...”

Then the tracks shift into a thumping, tribal bass line, so brutal that it reaches up, like a hand from the grave, tearing through your flesh, grasping under your ribs and pulling you into the dirt, pounding you again and again as Laurie continues his lilting mantra about rising together.

But not for long. Laurie soon explodes into a free-flowing splash of lyrical dexterity. He colorfully summons the people of the globe: multicultural, varied and united. One patchwork quilt, born from the dust, richer because of differences. Rising.

Lest any listener be confused by Laurie suggesting that people should embrace the sort of melting-pot humanism that erases cultural and racial distinction by ignoring power dynamics, he ends his poetic fireworks with this: “Please don’t ever let me be colorblind, sing a lullaby.” And then the mantra “Together we rise” resumes.

Things destabilize with the throb and chorus — until Brackett lifts the mic, chanting an acidic screed blasting repulsive culture vultures putting profits over the soul, warmongers, gossipers, policymakers smothering dreams, and those who love government more than the suffering humans they know. His bars end with a declaration that we are rising up against the conquerors. It’s a brutal injection of political theory that refuses some wishy-washy, late-capitalist notion of inclusivity rooted in consumption and exploitation. And then Laurie’s voice is back with his mantra and various people saying “Together we rise.”

The song i s revolutionary, something to dance to while doing the hard work of trying to make this world a better place with others, even when society tells us to go it alone. 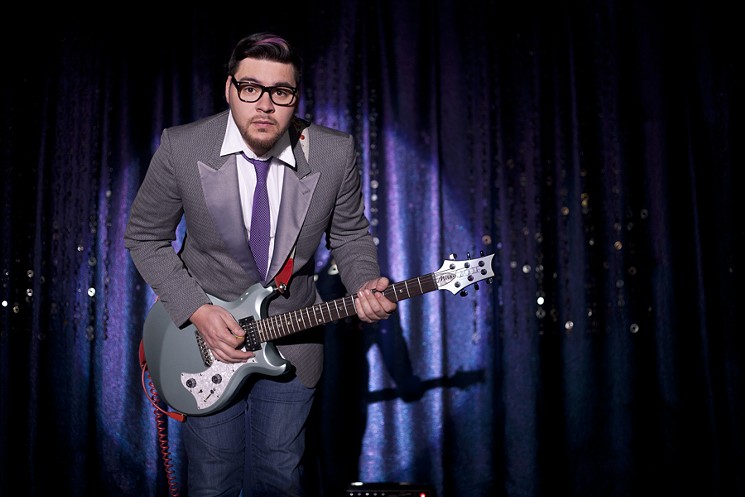 Flobots guitarist Andy "Rok" Guerrero.
Crystal Allen Photography
The second song the group dropped this year, “Me & You (Happy 2gether)” is a remix of the Turtles’ “Happy Together.” It opens with flaming guitar from co-founder and vocalist Andy Rok Guerrero, who then sings the upbeat tune before Laurie rips the mic from his hands and rages. It’s a fan favorite at concerts, says Guerrero, and the band jumped through hoops to get the copyright approved.

The third song to drop was “When It All Falls.” On it, Laurie raps about the country being on the brink of a civil war and how he's a “troubadour on the Titanic.” Leaning on the radical-left Christianity that influences much of the band’s philosophy, Flobots scrutinizes the class inequality in the country, addresses the fight between good and evil, and asks the question: “What ya gonna do when it all falls down?”

In October, Flobots will re-release its first album, the EP Flobots Present: Platypus, with the original version of "Handlebars" on it. “We remixed and mastered it, so it actually sounds pretty good for a recording that we did in two days back in 2005,” says Guerrero. If the band can clear the rights, it also plans to work with DJ Shadow on a remix.

At live shows, Flobots plans to add a new, third verse to “Handlebars,” making us wonder where the fate of that proud kid with no handlebars and an apocalyptic microphone will take him — and us: Toward hope? Apocalypse? Or redemption?

Decide for yourself when Flobots plays Levitt Pavilion on July 2 and Mishawaka Amphitheatre on July 3. Learn more at flobots.com.

Correction: An earlier version of this story stated that Flobots' nonprofit was initially funded with money from the Fight With Tools' record release. The seed funding for the organization, which was founded in 2007, actually came from the Hunt Alternatives fund.
KEEP WESTWORD FREE... Since we started Westword, it has been defined as the free, independent voice of Denver, and we'd like to keep it that way. With local media under siege, it's more important than ever for us to rally support behind funding our local journalism. You can help by participating in our "I Support" program, allowing us to keep offering readers access to our incisive coverage of local news, food and culture with no paywalls.
Make a one-time donation today for as little as $1.