Gabrielle Aplin on the Magic of Glastonbury 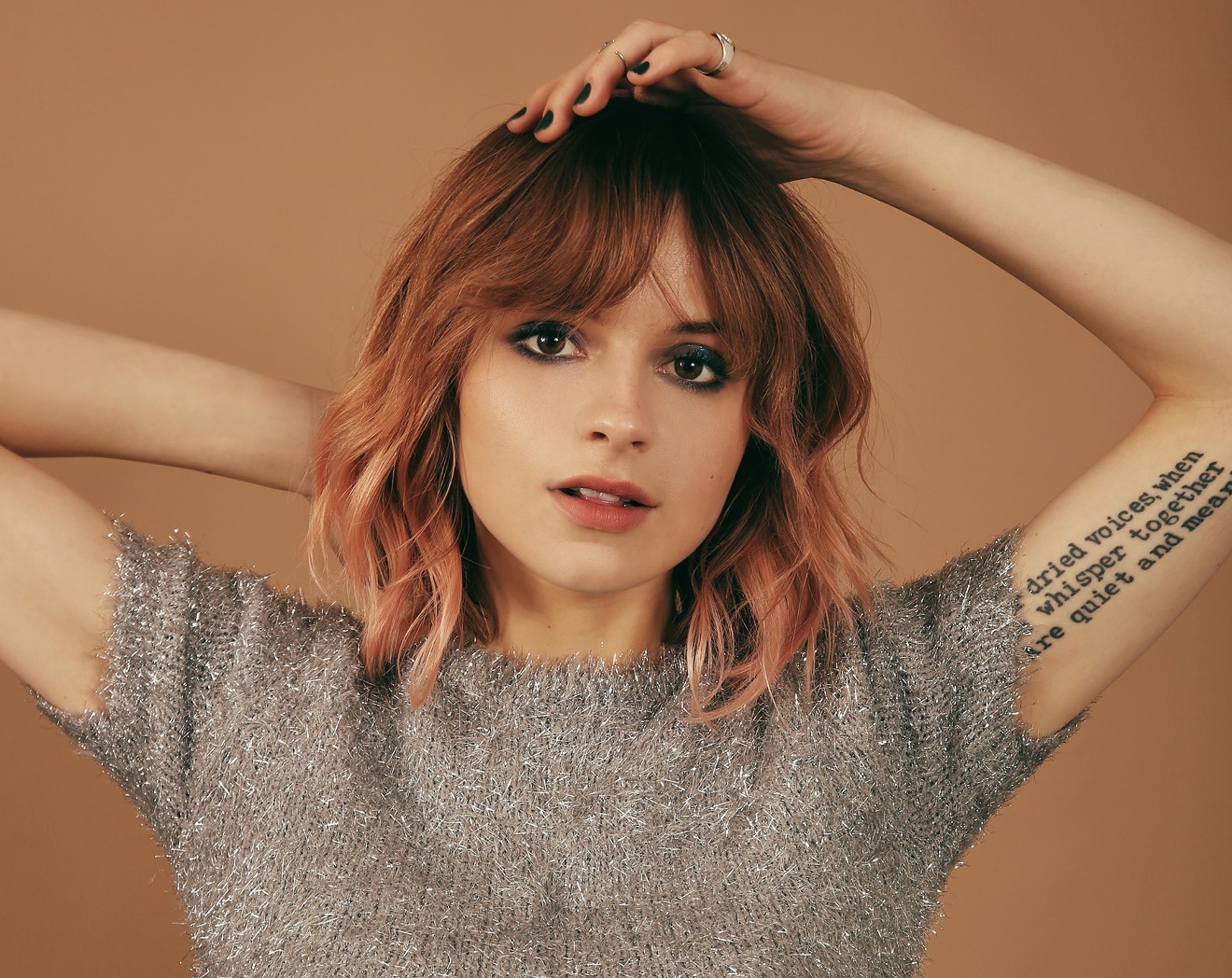 Singer-songwriter Gabrielle Aplin performs at Globe Hall on Saturday, March 3. Hanna Hillier
For her latest EP, Avalon, singer-songwriter Gabrielle Aplin found inspiration in the stars. She describes her hometown of Glastonbury, England, as magical, a place where masculine and feminine energies cross. Around the area are sites that hold mythical and spiritual significance, like the Isle of Avalon and the Chalice Well. While she doesn't consider herself to be particularly religious, Aplin has found structure for her life in astrology. Thus, the songs on Avalon reflect her spiritual journey and how Glastonbury impacts it.

We spoke with Aplin about how she was able to create a cosmic world for Avalon and her love of experimenting with different art forms.

Westword: Was singing something you were interested in during childhood, or did it speak to you later in life?

Gabrielle Aplin: It’s something that I just love. I love making things, and I’ve always loved any kind of art. So fine art, making things and crafts. Then I started on words, poems and making things out of words. Then I discovered Joni Mitchell, and I loved how she was combining her paintings, her songs and her poems and making albums out of it. I thought it was really cool to be involved in a project and all the different, creative mediums that come along with a project. I loved that, because I always thought I would have to pick one and find my thing: Do I write songs, do I play songs, or do I make artwork? What do I do? She was doing all of it, and it made me go, “Oh, I can do all of it! This is great!” [laughs].

So you have been able to combine different mediums now?

I really love to get involved and do the artwork. I love getting involved in artwork, especially. Definitely with video…I’m not a director [laughs], and I’m not a producer, but I love to be involved. Like, I’ll be able to come up with my idea and kind of craft the team around my idea and pick the right people to help me make it a physical thing. And the same with artwork. I’m really inspired by artists. Like for my Miss You EP artwork, I was really loving Damien Hirst’s butterflies and kaleidoscopes. So I was really inspired by him when I was making that artwork.

Will you tell me about your newest EP, Avalon — the inspiration behind it and what went into making it?

Avalon is kind of a spiritual name or mythical name for Glastonbury, which is the town where I grew up. I wrote about being there and how wonderful it is. It’s a really magical place. On my mood board of moods for the EP, I wanted it to be cosmic and a kind of homecoming. It’s a surreal version of reality and something kind of mystical.

Did you achieve the cosmic mood with the sound or the visuals?

I wanted to create magical things by using analog. So for the artwork, I wanted to have the three versions of myself, but I didn’t want to do it in Photoshop. I wanted to do it in analog. We shot everything on film to make sure we did that, using prisms and crystals in front of our lenses, for example, to create these little worlds and sort of weird versions of real life. I was also experimenting lots with sounds as well. I wanted to push myself a bit more. I wanted to create something sparkly and magical and still really real. ... I wanted to flip the singer-songwriter theme on its head a little bit but still have it as the core.


How would you say you've evolved over the years, either stylistically or as a performer or in your projects?

I would say I’ve gotten more confident. I think as an artist, I’ve gradually been wanting to push myself and get out of my comfort zone. I think when I started out, I felt like I’d be with my acoustic guitar at all times, for the rest of my life [laughs], and not really make anything different and constantly make acoustic, folk, pop albums. Then, dropping my ego over the years, I realized I’m completely happy to experiment and do different things and reinvent myself each time I have a project. Even pushing myself stylistically — with the clothes I wear and the way I eat when I’m on tour. Everything, everything is refined. I think I’m constantly finding out more about who I am and what I need.

And so your music has been the outlet through all that, as you are shedding skins?

Yeah, a lot of it was about ego. In some ways, I thought I’d constantly have a guitar on me and have an acoustic guitar and piano on every song I released, because that’s what my fans would know me for and that’s what I have to do. And then I realized I didn’t have to do that. When I strip the songs back to how they are written, they all sound like they were written in the same book because they’re songs.Then you play them on a piano and they all sound like they’re from the same batch, and I just thought that was the most important thing. And then instead of trying to crowbar sounds and themes, I thought I needed to conform them for songs. I decided to produce each song in the way I thought it deserved that brought out the best in it. Sometimes that means, like for “Waking up Slow” on Avalon or "Miss You," that meant pushing myself in a different direction because I believed that’s what the song actually needed [in order] to be finished. I let go of the ego of maybe annoying a few people who wouldn’t get the acoustic guitar or something.

Has it broadened your horizon inspiration-wise to be able to experiment? What have you learned specifically from experimenting with your sound?

I’ve been getting really into a lot more electronic music. A lot more older music from the ’60s and ’70s that used a lot of analog synths and stuff, which I’m really into now. Before, I just listened to singer-songwriters and bands. Now I’m really pushing myself to work with a lot of different artists, and I collaborate with house, dance and garage producers. I was never doing that before, and I would’ve always said no. Now these people get in touch with me to write with them, work with them, and I do it. I really enjoy it. ... I think I’m really open to way more things, which is obviously making for way more opportunities.