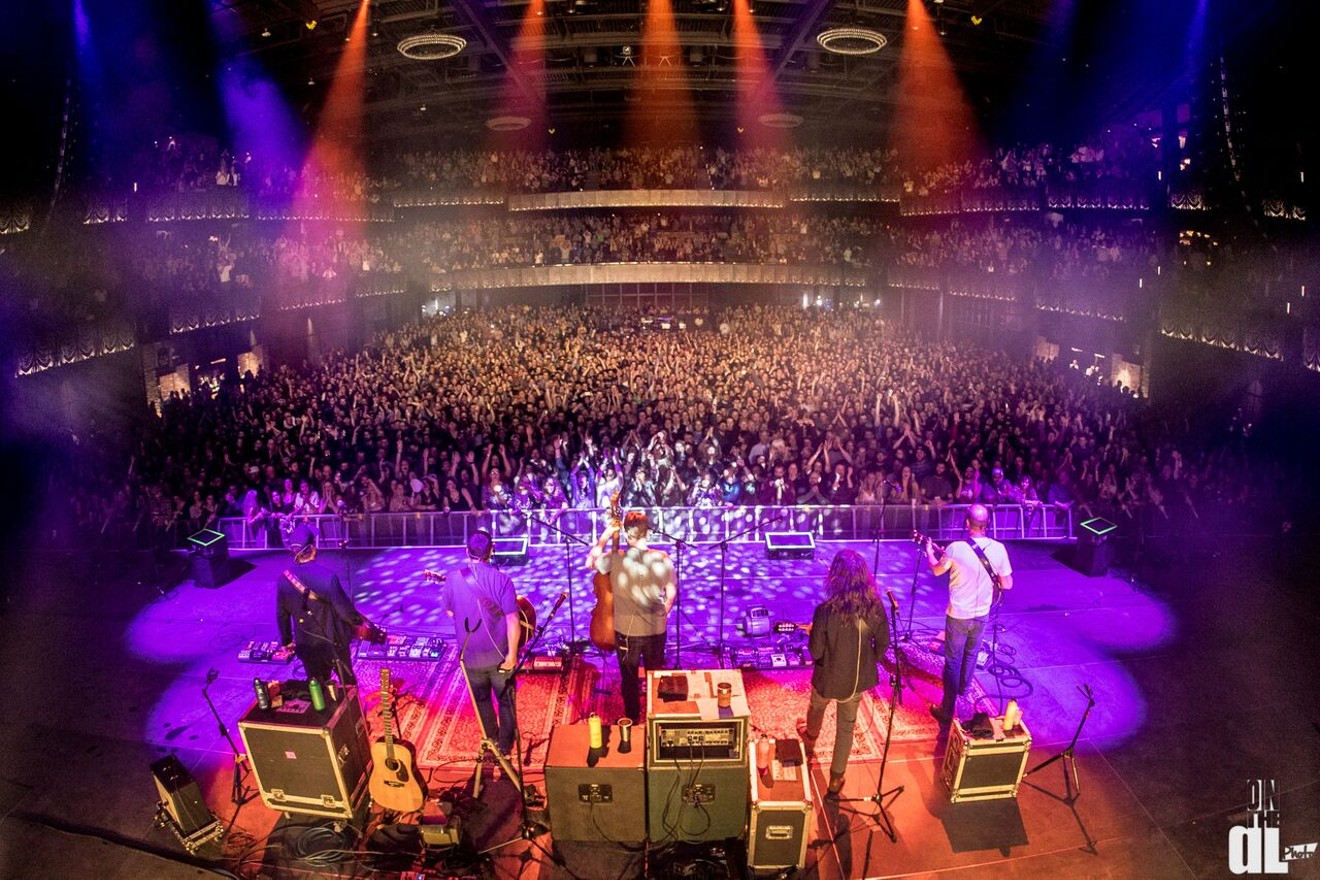 Dobro player Anders Beck says that he's beyond excited to play again in Denver, a city he considers a home away from home as well as "the-live music capital of the U.S." Beck, who currently lives in Nashville, recalls how the band got started in Colorado, winning a place at the Telluride Bluegrass Festival in 2006 and playing shows at such venues as the Ogden Theatre, Cervantes' Masterpiece Ballroom and the Bluebird Theater. Two of the band's members currently reside in Denver.

"There's not another city in the country where the growth for our band has been that extreme," Beck says. "To go from smaller clubs to three nights at Red Rocks is just a testament to the music scene that's in Denver. So anytime we get to play in Denver, it's really special to me and the whole band. The Mission is kind of like our winter half of Red Rocks."

Beck lived in Denver when the Mission Ballroom was being built, and the band performed there soon after it opened. Now it will be back on the stage, sharing songs from the new album that the musicians haven't played live before.

Stress Dreams is the product of nearly two years of work. "We had planned on making a new album before COVID hit, which threw a huge monkey wrench into everything," Beck recalls. "There were no shows, no live music anymore; shows were canceled indefinitely. We didn't know if we'd have anywhere to record and make an album. So we ended up with more questions than answers than we've ever had.

"Everyone's stuck at home for months not expecting that, and people start writing a lot more," he continues. "Without trying to be so, this album's contents became a lot more about isolation and the things that are taken away."

The band met in Winter Park to work on the album in August 2020, and the first recording session took place the next month in Vermont. "We took over the studio because we couldn't have contact with anyone," Beck says. "We were afraid of COVID, the people at the studio were afraid of COVID, so they essentially handed us the keys and were like, 'We'll drop catering off at the door twice a day and see you at the end.' ... It was just us isolated there."

The musicians spent two weeks recording in Vermont before going to Asheville, North Carolina, where they did two week-long sessions in March 2021. The album was mastered and produced by Greensky's engineer, Glenn Brown, who just won a Grammy with Billy Strings, and Dominic Davis, who plays bass for Jack White.

"We ended up having more songs than we needed and more time than we've ever had before," Beck says. "Because of the uncertainty in the world, we just got to keep working on this stuff. What makes this album unique is the time it was made. I wonder if in twenty years — if people are still listening to the music my friends and I make — whether there will be a real understanding of what happened musically during COVID times. The creative juices — not just for Greensky, but across the world — were really going."

Because the musicians had so much more time and material to work with than they'd had in the past, Beck says the album furthered the band's evolution. But that's also how he sees every album. "Every time we make a new album, it feels bigger, tighter — an evolution of the band musically," he explains. "By nature, we continue to grow."

This is the first album that contains a song Beck wrote himself: "Monument." He had the chorus in mind for a long time, he says, but when the pandemic hit, the words took on new meaning and the song developed from there:

You can build a castle that crumbles to a cave / Funny how a monument looks just like a grave / You don't know what you're holding when it's right there in your hand.

"Once COVID hit, the song became more powerful; everything got snapped away," he says. "Here we are, this band that felt pretty on top of the world, and then it was like everything you're planning for goes away."

Bassist Mike Duvall also wrote his first song, the album's title track. "It's a really cool opus piece of the album that ties into the whole feeling of quarantine," Beck says. "Bluegrass is thought of as being about love and happiness, but that's not where everyone's at right now. 'Stress Dreams' seems a little more apropos."

The band made an effort to balance the morose lyrics with hopeful, joyful sounds familiar to Greensky Bluegrass. "We wanted to write the music as making clear that we will all come back eventually," Beck says. "A lot of the songs are more overt as to where we are in our lives, but that's the Greensky way."

He adds: "It's always interesting to bring new materials from the albums into shows, because we're always improvisational, but we created these precise album versions of a song, and we play them at first just like they are on the album. So we start there, and then they morph over time into more of the live, Greensky jamming-out songs.

"I'm really excited for people to hear the whole album," Beck continues. "It's a great evolution of the Greensky album sound. The textures are just all over, and as we all get older, we continue to learn how to create the music in our heads. That's what it's all about for us."

Greensky Bluegrass is known for pulling bona fide musicians for guest appearances at its shows. Beck hints that the Mission shows may have some surprises, "but they're surprises, so I can't tell you what they are!" He says the band is also hoping to pull together some sort of benefit to aid the victims of the recent Marshall fire.

But above all, Beck is just happy to be back playing here. "The fans in Denver are really, really, really great music fans," he concludes, "so it makes me so excited to play music there."

Greensky Bluegrass, 8 p.m. Friday, January 7, and Saturday, January 8, at the Mission Ballroom, 4242 Wynkoop Street; tickets are $39.95 to $85. Stress Dreams will be available to stream on all platforms on Wednesday, January 19.
KEEP WESTWORD FREE... Since we started Westword, it has been defined as the free, independent voice of Denver, and we'd like to keep it that way. With local media under siege, it's more important than ever for us to rally support behind funding our local journalism. You can help by participating in our "I Support" program, allowing us to keep offering readers access to our incisive coverage of local news, food and culture with no paywalls.
Make a one-time donation today for as little as $1.
Emily Ferguson is Westword's Culture Editor, covering Denver's flourishing arts and music scene. Before landing this position, she worked as an editor at local and national political publications and held some odd jobs suited to her odd personality, including selling grilled cheese sandwiches at music festivals and performing with fire. Emily also writes on the arts for the Wall Street Journal and is an oil painter in her free time.
Contact: Emily Ferguson